Here are the 27 winners of The MICHELIN Guide Bangkok, Phuket and Phang-Nga 2019

Food & Drink
Here are the 27 winners of The MICHELIN Guide Bangkok, Phuket and Phang-Nga 2019
Share this article
Next article

Today was an interesting day in Thailand’s culinary history, with 27 restaurants awarded the highly sought-after Michelin-star(s). With the official release of The MICHELIN Guide Bangkok, Phuket and Phang-Nga 2019, a maroon-coloured and 348-page culinary advisory that will now grace the coffee and bedside-tables of many a home, this second edition saw an expansion to Bangkok’s outer provinces, as well as the growing gastronomic hubs of Phuket and Phang-Na. A swarm of chefs, restaurateurs, hoteliers and, of course, Bangkok’s glitterati of foodies gathered in eager anticipation for the results as The Park Hyatt played host to the release of the second edition of MICHELIN Guide in Thailand, which sees a total of 217 dining and 67 lodging establishments, including four two-star restaurants, with one being a new edition and 23 one-star establishments, of which 10 are new additions. 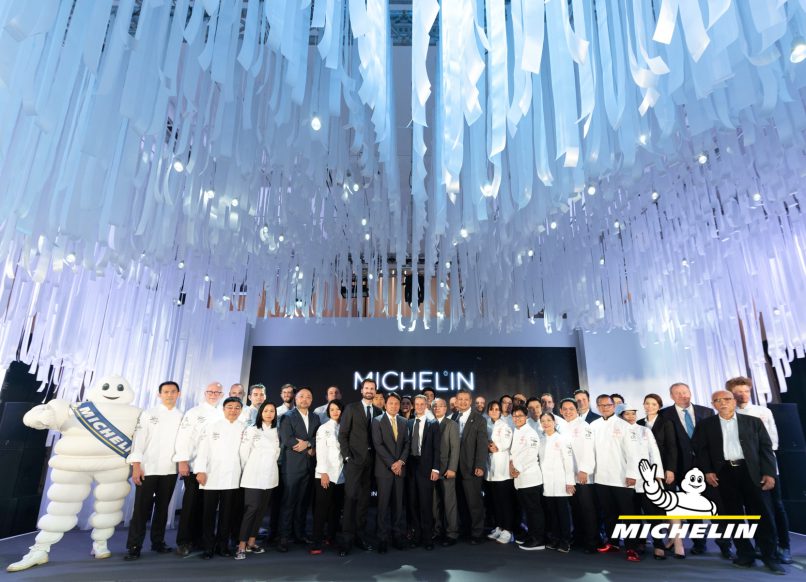 Thee-stars is the highest award an establishment can receive, a title which signifies that the restaurant deserves a “special visit”. The MICHELIN Guide concept is still relatively young in Bangkok and no restaurants yet hold this title.

Two-stars signify the food is good enough for one to ‘take a detour for’. In this 2019 edition, all of the two-star restaurants from last year’s selection – Gaggan, the Mandarin Oriental’s Le Normandie and Lebua’s Mezzaluna – retained their stars. Jumping from one-star to two was Sühring, with chef twin brothers Mathias and Thomas Sühring taking the stage together to accept the award. This was the only time throughout the two-hour award ceremony that two chefs accepted an award, to great applause too, might we add.

One-star signifies a “very good restaurant”, and according to this edition there are 23 very good dining spots in Bangkok, Phuket and Phang-Nga, 10 of which are new additions. Le Du and Gaa progressed from the ‘Plate’ – a term given to restaurants for ‘a good meal with fresh ingredients and capable preparation’, with a further eight new entries. Chef Riley Sanders of the artful Canvas stepped onto the stage to accept a star; other Bangkok restaurants accepting a star included Methavalai Sorndaeng, R-Haan, and Saawaan.

Despite having new chefs at their helm, the three restaurants with one-star (Elements, Nahm and Saneh Jaan) also retained their stars. Restaurants in outer Bangkok accepting a star include family-run and hidden-gem restaurant Ruean Panya in Samut Sakhon province and Suan Thip, which translates as ‘Garden of Eden’, in Nonthaburi.

The only restaurant to be awarded one star beyond the outer Bangkok territory is PRU, a sophisticated restaurant housed in luxury resort Trisara Phuket. Helmed by chef Jim Ophorst, PRU believes in the gifts of nature and elevates the farm-to-table concept using distinctly Thai ingredients. For those less enthused by the stars and looking for a meal for good value, The MICHELIN Guide Bangkok, Phuket and Phang-Nga 2019 also lists 72 Bib Gourmand restaurants, of which 42 are new additions. Extra points to those who make their way through all of them! The full list is now available in a bilingual digital edition at www.guide.michelin.com.

In a private interview with Gwendal Poullennec, the newly appointed international director of MICHELIN Guides, an interesting point arose:

“We are truly impressed by the number of establishments that have received stars this year, absolute proof that Thailand really is a world-class gastronomic destination. Not only are international chefs living in Thailand inspired by the local ingredients, but Thai chefs are transforming international culinary best-practice.”

He then added: ‘Receiving a star is no easy feat and every chef should be proud as every decision is not made by just one inspector alone. To ensure consistency with our brand DNA and to ensure a balanced and fair approach, decisions are always made as a group, with many inspectors, both local and international, contributing to the final outcome’.

So if you received a star, you earned it. Well done! Huge congratulations to you from Lifestyle Asia Bangkok.

Michelin Guide MICHELIN Guide Bangkok 2019 MICHELIN Guide Bangkok Phuket and Phang-Nga 2019
Catherine Napalai Faulder
Catherine is Bangkok born and bred and knows the angles of the city and its people very personally. You'll often catch her writing about the upsides of Thainess, the richness and diversity of Bangkok's third cultures and the true meaning of wellness.
Travel Wellness Culture Living People

Where to find the best croissant in Bangkok

Honey 101: a complete guide to varieties, tasting notes, and uses

Consider this a warning: these Bangkok burritos will drive you crazy

5 new Bangkok cafes you need to try this February 2020