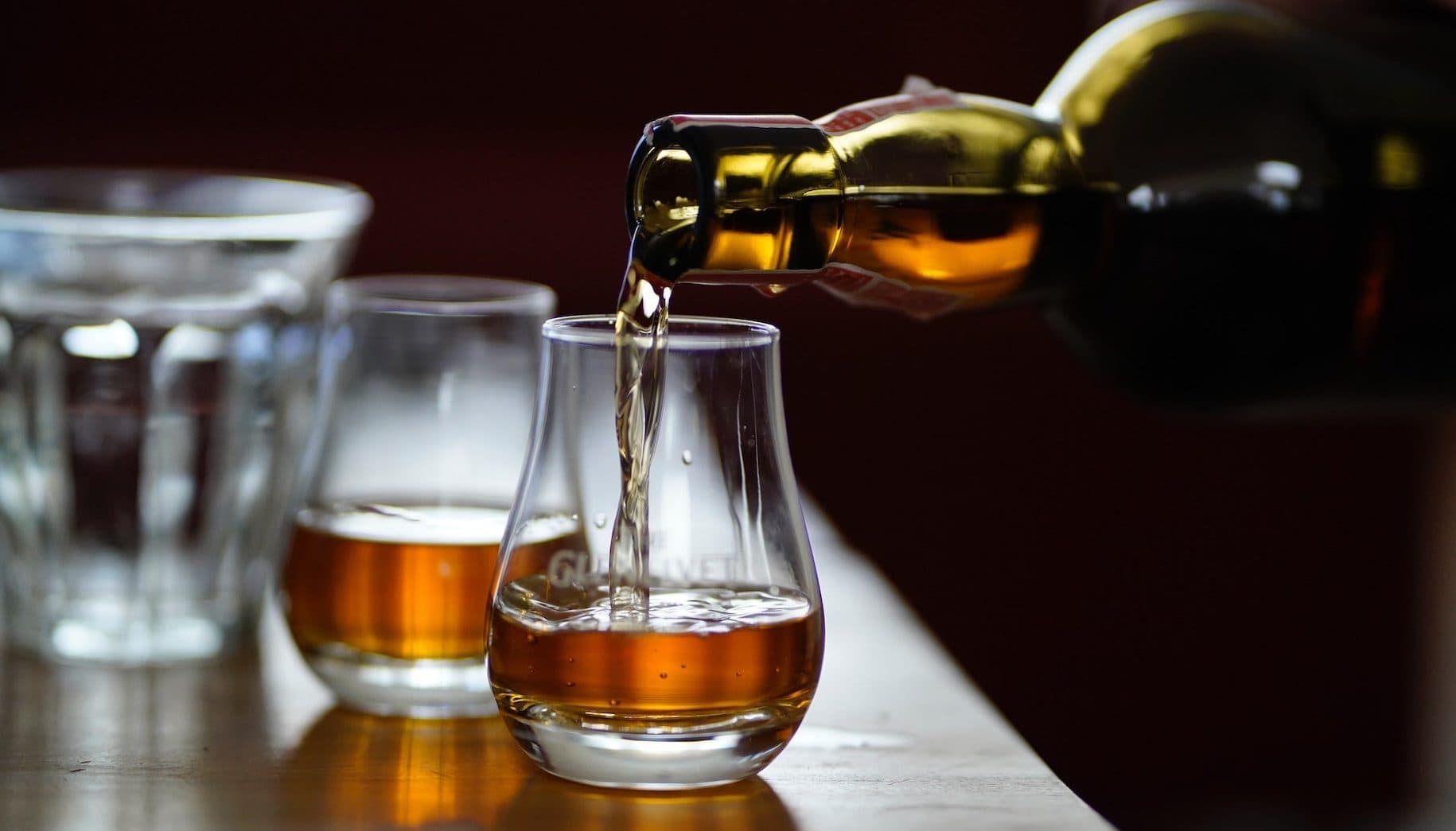 How to pair whisky with Chinese food like a pro

We recently attended the Bangkok launch event for Johnnie Walker’s limited edition Blue Label Year of the Pig Bottle, and found much to admire throughout the five-course meal, pairing immaculately the house’s most exclusive whisky with Chinese food. It may seem like — for lack of a better/cheekier term – whisky business to match the two together, but as it turns out, it can be an aromatic mind-and-tastebud-boggling experience.

After all, it was about time whisky stepped out of the limelight of old gentlemen’s studies and cigar bars into a more relaxed setting. Particularly in Asia, people have been drinking stronger spirits (over, say, wine) alongside their meals for years, and especially in recent times, more and more millennials are confessing a love for the single malt mania. There’s an exciting cultural and culinary shift too, in which we’re seeing more food pairings with cocktails or with other liquors, experimenting with a depth of flavour and a curiosity very different to a glass of vino.

Whiskies come with a variety of flavours, from the light and fruity to the rich and smoky. This makes them dangerous and daring to pair with food (and not to be crass but their alcohol percentage is a sky rocket from beer or wine too), yet can prove worthy when done right. Taking note and inspiration from the beautiful blue Johnnie Walker bottle, we’ve sussed out five cardinal rules and takeaway points on how to pair your Chinese (particularly Cantonese) food dish with your whisky. You can thank us later.

The first rule seems relatively simple, and is reminiscent of the first chapter in any wine pairing handbook: always combine a light liquid with a light starter, like seafood. For whisky, it isn’t exactly rocket science, considering that particularly the Scottish island whiskies are close at home with oysters and smoked salmon.

Whiskies in bourbon casks tend to have a lighter flavour profile, often with subtle touches of sweetness, really allowing them to carry the aromas in light starter dishes without being overwhelming. However, unlike wine, there’s a little bit of technique to the game. For our meal, we were instructed to have our oyster and a bite of the lobster first, before sipping the Gold Label Reserve. And indeed, whilst we took a sip of the drink at the beginning of the meal (we have no self control), on tasting the whisky after the recommended bites, the pairing became far more obviously complimentary. Furthermore, whilst it doesn’t come advisable to taint the fresh seafood flavours of a light starter too much, particularly Japanese and American whiskies come highly recommended for Chinese food pairings, given the slight salinity that can balance out any traditionally Asian umami aromas.

Rich, full-bodied whiskies are your friend for meats

If light whiskies are somewhat similar to white wines, richer whiskies are in a close liquid neighbourhood to red wines – to an extent. Aged, strong, smoky whiskies can really deepen the flavours in meat dishes – particularly red meats – truly adding a new edge of indulgence to the dining experience. It’s understandable, considering the fruitiness and smoothness whiskies aged in sherry casks tend to inhibit, pairing particularly well with fatty meat dishes too, even if they don’t cut through fat in quite the same way as red wine.

Regardless, the wood smoke and spice in an aged whisky offers a warm lay-up especially for the sauces that often accompany meats in Chinese dishes. We combined the auspicious Johnnie Walker Blue Label Chinese New Year 2019 Year of the Pig whisky with a wok-fried dry aged black pepper beef, and suffice to say, it was the star of our meal. The spice from the pepper was striking on the tongue, but offered an exciting marriage to the drink, with a memorable lasting aftertaste.

Consider aroma and texture, and be mindful of balance

When pairing whisky with Chinese food, taste is paramount – but it’s not everything. It’s important to think of the pairing as a balanced partnership and a compromise of sorts. Some whiskies can leave a waxy feeling on the tongue, making them a great pairing with fresher, citrus-y dishes, whilst others are a seriously strong syrup-y showstopper from the scent to the tongue, and need to be paired with less flavoursome dishes. It’s about balance, it’s about beauty, and not about letting one element dominate the other.

When we heard the final savoury course of our meal was to be truffle and crab egg noodles, curious eyebrow raises crossed the dinner table, but somehow it worked. A strong flavour (like truffle) need not always be met with a light whisky. It’s about letting the flavours, the aroma, and the textures meet at a halfway point and be presented as equals. The elegant John Walker & Sons 21 Year Whisky boasted interesting layers of intensity, that went intriguingly well with the smoky, oily noodles. The smooth finish acted as a well-rounded end to the savoury courses. It’s a risky combination, and we recommend nevertheless to stay away from garlic or overly imposing flavours when pairing with whisky, but it can be pleasantly surprising when done right. It’s in the subtle details – not direct matches – but complements.

Build up the flavour profile

A word of advice from the dinner party and from someone who knows their whisky really, really well: always completely ignore the first sip you take, unless you’re an avid whisky drinker who drinks the stuff on the daily. Drinking whisky – especially in a multi-course dinner setting – is about building up the flavour profile very gradually, so as to really appreciate the stronger, full-bodied whiskies that come towards the later courses. Only ever serve one serving of each whisky, so as to not overwhelm, and bear in mind the art of drinking whisky. It’s not beer or vodka. It’s a beverage that is enjoyed sip by sip, and savoured for its subtlety that can only really be appreciated a few glasses in.

We weren’t served a whisky with dessert, and on some level it’s completely understandable why. Whisky either is the dessert or comes after the dessert. It can be too overpowering otherwise. Think about it: you wouldn’t pair a glass of Moscato with a macaron either. You’re not an animal.

Don’t be afraid to experiment

The previous rule dictates that you must not be an animal, but if you were feeling particularly wild, do not fear a little experimentation. We ended our meal with the incredible John Walker & Sons King George V paired with – you’ll never believe this – a fortune cookie. Sensuous, well-layered, and intensely indulgent, the simple pastry was suited beautifully to the rich whisky, giving it the tasteful podium to really let it shine through. It’s an ideal combination for those who like a small and not too sweet dessert to accompany their final dram, and indeed many whisky pairers have found a match with whisky and sugar (and particularly dark chocolate) that can work well. Have a little fun with it, but don’t overdo it. Lest we forget: this is whisky, for crying out loud.

Drinks Food Whisky Whisky Pairing Dining Whiskey
Lisa Gries
Managing Editor, Bangkok
Lisa loves to travel, and is always on the lookout for the world’s best nap spots. She’s a serious Asian art history nerd, and has a knack for languages and coffee table books. She hopes to publish her own novels one day, one of which will likely be called ‘All The Great Conversations I Had In A Bangkok Speakeasy.’ It’s a work in progress.
Travel Drinks Watches Jewellery

Style
Siam Magical Moments
Culture
Our theme for February 2020 is not cheesy at all
Food & Drink
A quest for the best dumplings in Bangkok (and what that actually means)
Style
10 fashion brand names you might be mispronouncing
Style
6 transparent watches that will make you want to bare all
Style
Designer lunches: the most famous fashion cafes around the globe
Travel
The ultimate travel guide to Bali
Travel
Airport Tipples: where to drink at Singapore’s Jewel Changi Airport on your next stopover
Beauty & Grooming
Statement hair partings are the must-wear hair trend for spring
Style
Chanel unveils new limited edition models to celebrate 20 years of the J12
Sign up for our newsletters to have the latest stories delivered straight to your inbox every week.

Freedom of style is the mantra for @hm’s SS20 St