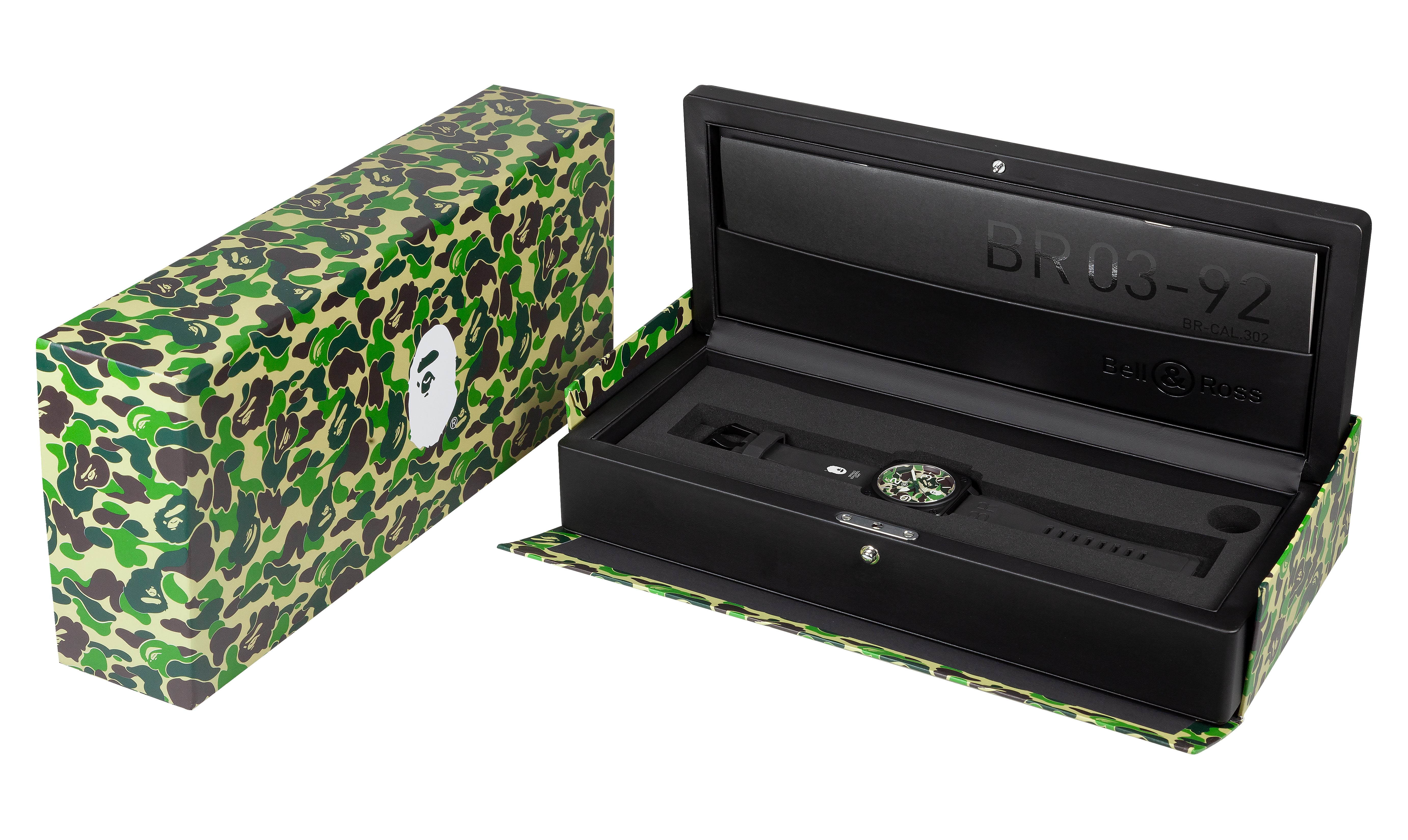 Streetwear to some people is something new that has only been around for the last few years. For fanatics, streetwear has been around for many years but without the media hype and crazy resale prices. Aside from Supreme, A Bathing Ape (Bape) is one such streetwear brand that can be considered the OGs of streetwear.

Founded by Nigo back in 1993 in Japan, Bape is arguably Japan’s biggest streetwear and lifestyle brand. Nigo is also the co-owner and head designer of Pharrell Williams’ Billionaire Boys Club and Ice Cream brands. Aside from Bape’s love for camouflage, it is also famous for regularly using its Bape Shark design as well as other animal prints on its apparel and accessories.

With this year being its 25th birthday, Bape is collaborating with 25 different brands in conjunction with its anniversary and Bell & Ross is one of them. This is a collaboration that many have hoped for, due to both brands’ heavy usage of timeless military-style prints.

Known for its aviation and diving watches, Bell & Ross utilises one of its most iconic timepieces for the capsule collection, the BR 03-92. Carrying its black matte ceramic cases in its trademark square shape, the BR 03-92 comes in two models featuring Bape’s signature camouflage print. Much like a typical Bell & Ross watch, its 42mm case is inspired from military techniques of marking for maximum legibility.

First up is the BR 03-92 25th anniversary edition, limited to only 25 pieces. A more minimalist piece, it comes with Bape’s iconic ape head on its black dial at its 6 o’clock. The watch is also capable of telling time in the dark, thanks to Superluminova C3.

The watch also comes in a water-resistant Pelican box wrapped in a similar colourway as the watch as well as two different straps, leather and rubber. Both the black rubber and grey leather strap will feature the camo print as well.

Next up is the BR 03-92 Green Camo with only 100 pieces available. On its face is Bape’s original green camouflage print accompanied with the ape head. Unlike the former, the latter will come with a white motif, providing a nice contrast of colour against its green camo background.

The model also comse with its own water-resistant Pelican box in green camo and with only one strap. There will only be the rubberised black strap with the Bape logo on one end and B&R on the other.

Both watches are now available on Bape as well as selected Bell & Ross boutiques.

Luxury Watches Luxury Timepieces Bell & Ross A Bathing Ape bape bape 25th anniversary br 03-92 bell & ross br 03-92 bape x bell & ross
Wi-Liam Teh
Senior Writer
Wi-Liam is a geek at heart with a penchant for tattoos. Never without a drink in hand (preferably whisky, gin, or Guinness), he is also a writer by day and a keyboard warrior by night. On his day off, he masquerades as a streetwear and sneakerhead enthusiast while his bank account says otherwise.
Tech Cars Watches