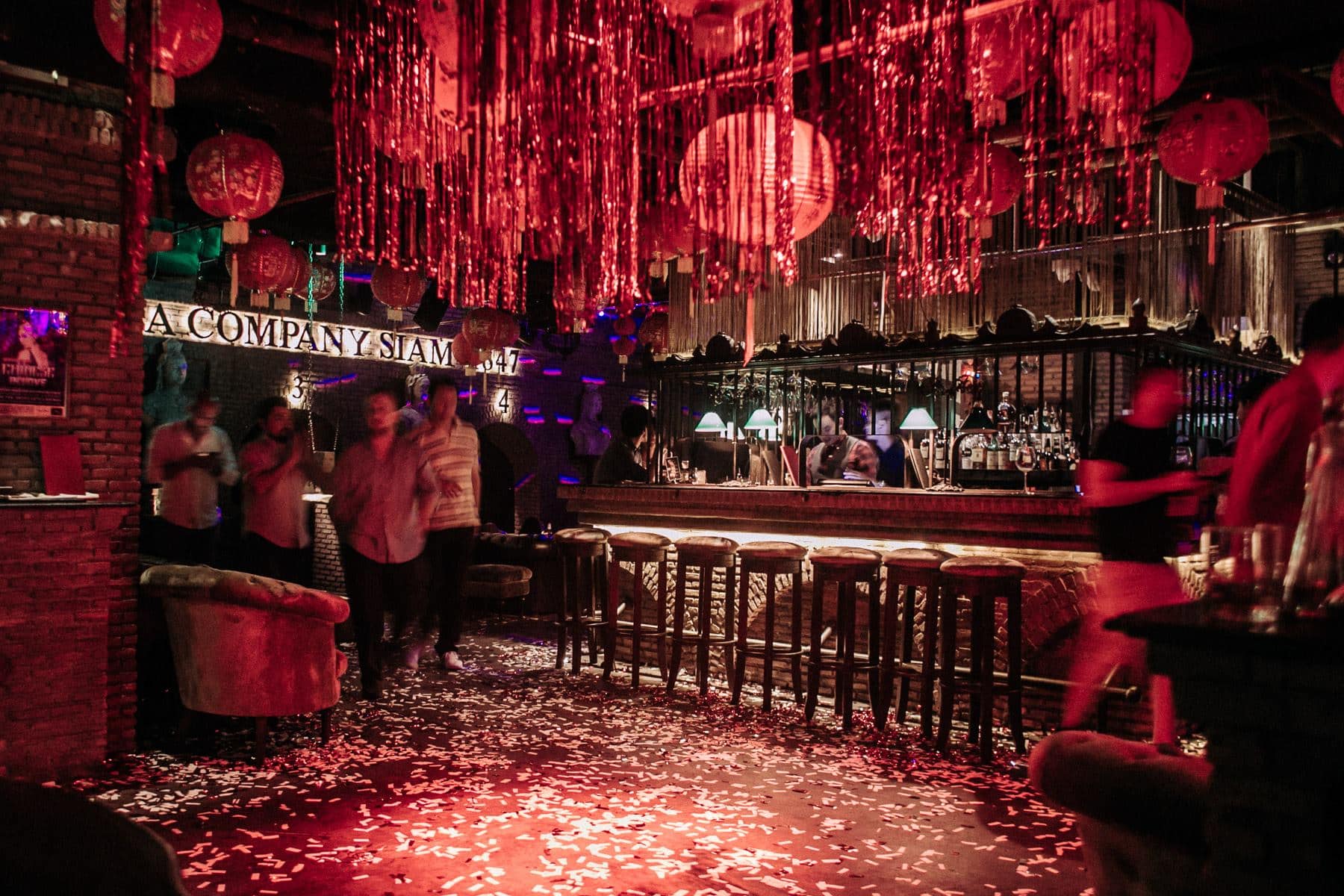 Best nightclubs in Bangkok to dance the night away

Bangkok’s nightclubs are definitely one of the city’s pull factors. With a growing database of local DJs consistently bringing their A-game to the decks, and international DJs and producers who want to make Bangkok their second home, we’re not starved for choice when it comes to quality nightlife.

And we’re not talking naughty bars with fake drinks and terrible speakers; no, no, no! We’re talking clubs with real slick beats, great sound systems and an all-round top-notch vibe in the way of aesthetic, drinks and energy levels on the dance floor. Whether you’re visiting or you’re a Bangkok clubbing veteran, here are some Lifestyle-Asia-certified nightclubs in Bangkok that’ll have you dancing the night away like there’s no tomorrow.

Neighbourhood: Thonglor
Entrance fee: None
Drink price: Averaging THB 375
Opening hours: 10pm–2am
Address: Sukhumvit Soi 45, Bangkok, 10110
Compare to: Levels
Part night-out and part night at the theatre, some of the best memories of many Bangkokians features Sing Sing Theater. It’s a go-to that is completely commercial (because everyone knows it) while also maintaining an under-the-radar and mysterious vibe. Stationed in the heart of Sukhumvit and teeming with a Chinese-themed theatre aesthetic, Sing Sing Theater is where you go to when you want to escape into another world, dress up to the nines, have classy drinks, and dance the night away. Saturdays are a bit of a nightmare in our opinion (as it is jam-packed and usually playing EDM) whereas Sundays are louder, with the famous weekly LGBT-themed night. Week nights are super cool, with good old hip hop usually turning up a Tuesday, world-famous techno or house DJs taking the decks on a Wednesday and Ladie’s Night making things hot on Thursdays. All in all, there’s something for everyone at Sing Sing Theater.

Neighbourhood: Asoke
Entrance fee: Usually THB 300 with free drink
Drink price: Averaging THB 200
Opening hours: 9pm–3am
Address: Sukhumvit Soi 23, Bangkok, 10110
Compare to: Mustache Bar
GLOW Club has been the game changer in Bangkok’s electronic music scene for over a decade now, bringing some of the best international talents to the Bangkok scene whilst simultaneously inspiring, educating and making residents out of the city’s amazing local talent. From dirty techno and dark and deep house to the likes of drum and bass, jump-up and trance, there’s one thing that’s always certain when you head to Glow: there’s bound to be booming, brilliant and cutting-edge music. The club’s Funktion-One sound system means that your experience of sound is just that much more elevated. And the intimate space means you are closer and feel more connected to the DJ; so when it’s a hot name rocking the decks, you just feel that much more special. Long live Glow!

Neighbourhood: Silom
Entrance fee: No entrance free
Drink price: Averaging THB 350
Opening hours: 7:30pm–2am
Address: Novotel Bangkok Fenix Silom, 320 Si Lom, Bangkok, 10500
Compare to: Whiteline
Sounds like the lady down the road who has some really nice shoes, don’t you think? Although some would argue this is a bar, we’re going to go full-out and say it’s definitely got more of a nightclub feel. Nothing beats a smoke-filled and jazzy night at Maggie Choo’s, a place that gives off a sort of glamorous Chinese opium den type of vibe. The cocktails are killer and the music is top-notch and classy, with local and international jazz bands and singers often gracing the stage before the evening is then amped up by a smooth electronic DJ. Live musical acts are quite the norm here, especially when it comes to Sunday Gay’s night when the stage is more often than not taken over by some incredibly talented drag queens, ahem, Pangina Heals, we’re looking at you! Known for glam, jazz and drag – Maggie Choo’s is a favourite amongst most Bangkokians.

Neighbourhood: Thonglor
Entrance fee: Usually THB 500 with free drink; bigger acts THB 800+
Drink price: Averaging THB 400
Opening hours: 7:30pm–2am
Address: 72 Courtyard, Sukhumvit Soi 55, Bangkok 10110
Compare to: VIOLETT, DEMO
Good air-conditioning, great speakers, phenomenal lights and, arguably, the best music in town. Some of the best nights to be had in Bangkok start or end with Beam, a staple in Thonglor’s night-time scene. Housed at 72 Courtyard where you’ll find a lively selection of cool eateries to line up your stomachs and get started on the pre-game, once you enter Beam, the music just takes you to another level and makes your heart sing. From futuristic and Lofi hip hop to melodic techno and some seriously saucy house tune-age, Beam’s got it all. Drinks are a tad expensive but boy do they taste good! The place consistently continues to bring in the best international headliners, from Seoul female DJ Peggy Gou to progressive house veteran Sasha (we love you!) and Hong Kong’s favourite rave instigators, Yeti Out. You’ll simply hear it all, see it all, and feel it all at Beam.

DND (Do Not Disturb)

Neighbourhood: Ekkamai
Entrance fee: No entrance fee
Drink price: THB 300
Opening hours: 8pm–2am
Address: 217/8, Nunglen, Ekkamai Road, Bangkok, 10110
Compare to: Sugar Club, Insanity Nightclub
If you’re after the super mainstream vibe, i.e the likes of EDM, which has been, and still is very popular amongst Thai party-goers, then DND – Do Not Disturb – is where you’ll want to dance the night away, in the name of commercial dance music. The club is probably one of the best at producing that high-octane, jump-up and bouncy experience on the dance floor, with groups gathered around tables sharing a bottle of Jack or eating food and live emcees that keep things super interesting! Some of the biggest international names in EDM have also graced the space here – not that we can recite any of them – as well as local leading talents from other genres, such as Thailand’s favourite Getsunova, synth-pop sensation Polycat and rap artist, UrboyTj.

The Club at Koi

Neighbourhood: Sathorn
Entrance fee: No entrance fee
Drink price: THB 350
Opening hours: 9pm–2am
Address: 217/8, Nunglen, Ekkamai Road, Bangkok, 10110
Compare to: Above Eleven
We miss CÉ LA VI Bangkok. That’s one of the contributing factors to why we like The Club at Koi so much. We also love Koi generally, LA’s rendition as well as the old Koi lounge on Sukhumvit 20, another contributing factor. It’s still making a name for itself, but with class acts (DJs, shows, exhibitions, fashion shows), class cocktails and a classy atmosphere (yes, we dropped the triple C) the venue has a lot going for it and its proximity to Bangkok’s CBD means its the perfect after-work night out. Koi’s Japanese-fusion restaurant next door also means you can go from dinner to clubbing in no time. Win-win.

This article first appeared on Lifestyle Asia Bangkok on 24 April 2019.

Living
Our Good Life Guide to Staying In
Style
Best Dressed in Bangkok: Quarantine Grocery Shopping Edition
Culture
30 things to do to kill quarantine boredom
Style
8 fashionable face masks for Bangkokians with style
Food & Drink
The best burger deliveries in Bangkok
Style
Lo and behold: these vegan sneakers are made of apple leather
Food & Drink
The Rosewood Bangkok introduces a luxury drive-through concept
Gear
Just in time for summer: Porsche unveils the eighth-generation 911 Targa
Style
The future of luxury shopping after COVID-19
Gear
How COVID-19 reshaped the landscape of online gaming
Sign up for our newsletters to have the latest stories delivered straight to your inbox every week.

These Hollywood stars are reading children’s novels to save lives

8 funny sitcoms to watch on Netflix this weekend