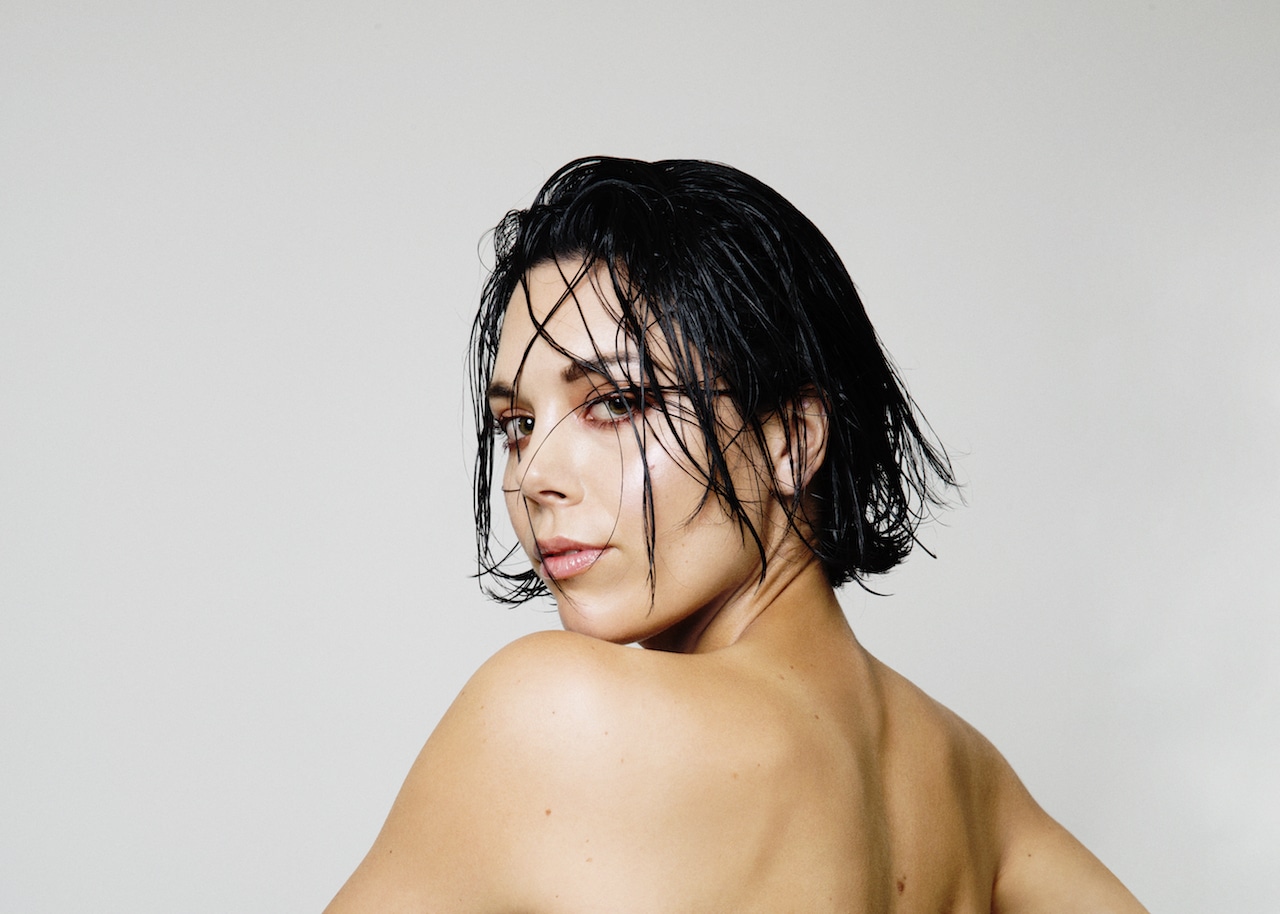 Australia-born and LA-based, the singer-songwriter George Maple is the coolest multi-hyphenate shaking up the culture scene right now. Not just a pop star with a rhythmic sultry voice, she’s a multi-media artist who incorporates different art forms from fashion to film into her music. From working alongside the likes of Flume, Snakehips, and Tkay Maidza, she’s now ready for a solo tour around Asia. Releasing a new album later this year, she’ll then be storming through Tokyo, Seoul, Hong Kong, Singapore, and of course, Bangkok.

In the cinematic decor and vintage swankiness of the Hotel Muse, we met with the tall yet down-to-earth George to talk about her multi-media art and plans for her Asia tour.

Emerging from the lift in elegantly floor-dragging trousers, metallic dagger earrings, and a white tshirt worn under a clear plastic corset, George looks like she’s stepped off a runway from the future. The notion that this fashion-forward singer could be from another age gets stronger when we start our conversation by talking about the year 2077.

“We live in the future. The year is 2077 and the world’s a post-apocalyptic landscape. All the buildings are completely new and different, all the fashion too.”

George is talking about the new concept for her latest project. After writing the synopsis for a film about this future world, she has taken snapshots of various moments to provide a visual setting for her music. George Maple’s music always tells a story, and her next project has begun with an energetic fighter’s anthem titled Champion, released earlier this February. With its sensual, thundering bass layered over with dynamic marching bands, the song captures “a moment between trial and triumph”. It’s a real tribute to power and determination.

“It’s also a song about integrity and always remembering to protect your values”, George says. “Even though times are moving so fast and it really does feel like we’re constantly living in the future, I still think it’s important for the creative process to be focused on the present. That’s what makes your work authentic. I don’t plan ahead to try and predict trends or what will be popular. It’s all about what you’re feeling at that moment – that should always be what energises you.”

But speaking of energy, she seems strangely chirpy and enthusiastic for someone who has travelled half the globe in two weeks and is due for an early flight the next morning. But this is how George Maple works. She explains that her creative process involves going all out to a non-stop frenzy of new experiences, and then taking time out to be alone and absorb everything.

“I love travelling because I get really creatively influenced by my environment. Just travelling around Asia recently has really opened my eyes to a whole new world. I feel like an actual alien; I’m so out of my depth!” Finding inspiration from Tokyo’s Dover Street Market and even the sleek modern architecture of our shopping mall, Central Embassy, George truly does live in her moment and keeps her mind open and active at all times.

“But then again, I’m also looking forward to having a couple of weeks after this madness just to stare at a blank wall. The period of reflection is so important, and sometimes that means self-isolation too.”

Turning all of her experiences and observations into her artistic expressions involves a huge range of elements. As a visual artist as well as a vocal one, George also designs the shoot settings and styles the fashion to go with her songs.

George’s quirky and daring dress sense has had her being held as Australia’s answer to Lady Gaga. Fashion has long played a big role in her art. For her previous album, Lover, she collaborated with Swarovski and created themes of feminine power and self-love. Using the distinctive crystals from the famous jewellery brand, she set out to redefine the word Lover and move past its associations with adulterous affairs to instead signify the beauty of self-love and the strength and elegance that comes with self-confidence.

George also lists Gucci and Armani (who she’s designed pieces with) as previous collaborators. When asked what she thinks of the fashion scene in Bangkok, George describes it as “kind of futuristic”.

“It was quite strange actually coming here because I’d been working on this project about a vision of the future, and then when I saw these advertisements for fashion, cosmetics, and beauty treatments in Bangkok, they all looked like how I imagined aesthetics in the future would look.”

She also comments that she’d love an opportunity to collaborate with Thai designers. Touring around Asia, she says, has been stimulating because it’s an entirely different world to the one she’s familiar with. The fashion here in particular exemplifies the kind of avant-garde, visually advanced, and futuristic world that originally inspired the aesthetics for her new album.

But with such visually-focused music, does she worry about not being treated as a real singer? Like the video that killed the radio star?

“To me, art is art. I think about concepts rather than the different methods of expressing these concepts. It’s getting more and more difficult to separate art forms like fashion, music, film, and even architecture. In the end, they’re all capable of being modes of expression and I think we’re meant to flow in and out of them, merge them together and treat them as one”.

We think Bangkok would agree with her there. With our love for bold and expressive fashion, interest in cinematic and visual arts, and appreciation for good beats, George Maple is sure to fit right in when she comes back here on tour.

Meanwhile, check out her latest single Champion and get ready for the full album coming out this year: