Home > Culture > Entertainment > F4 Thailand: Everything you need to know about Thailand’s ‘Boys Over Flowers’ remake F4 Thailand: Everything you need to know about Thailand’s ‘Boys Over Flowers’ remake

Culture
F4 Thailand: Everything you need to know about Thailand’s ‘Boys Over Flowers’ remake
Share this article
Next article

After a series of adaptations across Asia, F4 Thailand is the next remake of ‘Boys Over Flowers’.

Unless you’re a fan of Asian dramas, you might have no idea what this is all about. But don’t you worry, we’ll fill you in. Boys Over Flowers is an iconic Kdrama hit based on the Japanese manga Hana Yori Dango that was first published in 1992. Since then, there have been continuous adaptations in various mediums. Besides the Japanese TV drama Hana Yori Dango, the Chinese and Taiwanese versions of Meteor Garden are the adaptations that attracted high viewership across Asia. Thailand is the next in line to recreate its version, F4 Thailand. There has yet to be any confirmation for the official date of the premiere. However, a lot of excitement is already in the air. Here’s a sneak peek. 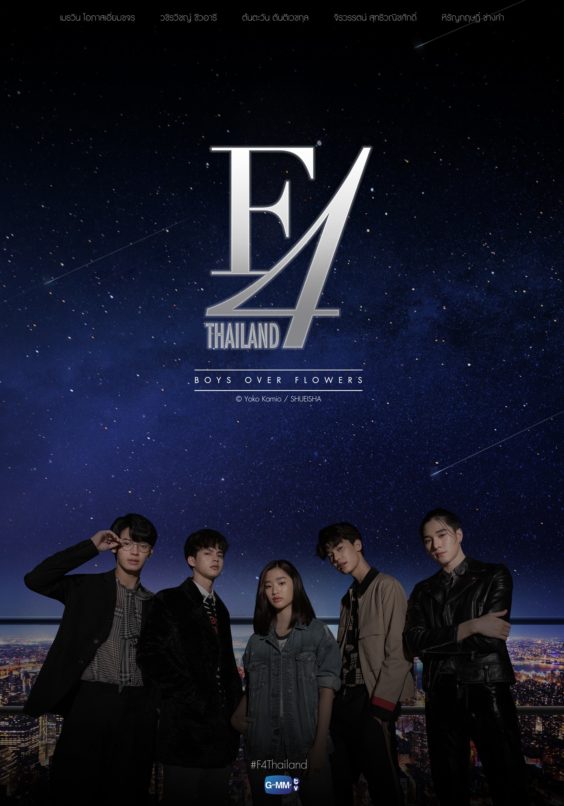 F4 Thailand still borrows the same storyline from the original manga series. It tells the story of Gorya, a girl from a low-class family who successfully enrols at an ultra-elite school. Thereafter, she meets the notorious F4 clique, the most popular group of rich and handsome boys at the school. Due to her status, she bears a miserable life in school. Moreover, she becomes involved with the F4 boys in a whirlwind of confusion and a love triangle.

Anticipation of becoming the next hit

The main cast consists of Bright Vachirawit, Win Metawin, Dew Jirawat, Nani Hirunkit, and Tu Tontawan who will be making her acting debut via F4 Thailand. Bright and Win have a large international fanbase, so we’re anticipating another high viewership and popularity from this international remake. At the same time, we’re expecting to see new elements in the plot and the uniqueness of this F4 gang compared to the other versions. Just like how the F4 gang of every version steals the heart of the fans, we believe that this version will be no different.

Watch the trailer below to get a glimpse of what you can expect.

Entertainment Thai tv show Thai series Film & TV K-drama
You might also like ...
Style
12 designer heels we spotted and loved in K-drama shows
Culture
The 10 highest-paid K-drama actors and actresses today
Living
New K-dramas to catch on Netflix September and October 2021
Living
If you loved ‘Squid Game,’ check out these 7 other survival game-themed shows
Karatpetch Vattanapoon
As a culture enthusiast, Karatpetch loves to travel, learn new cultures and languages, and has great zealousness for food. She is also an amateur dancer of various styles. Watching sports, sightseeing, cooking, knitting and exploring beauty goodies are her moments of simple joy.