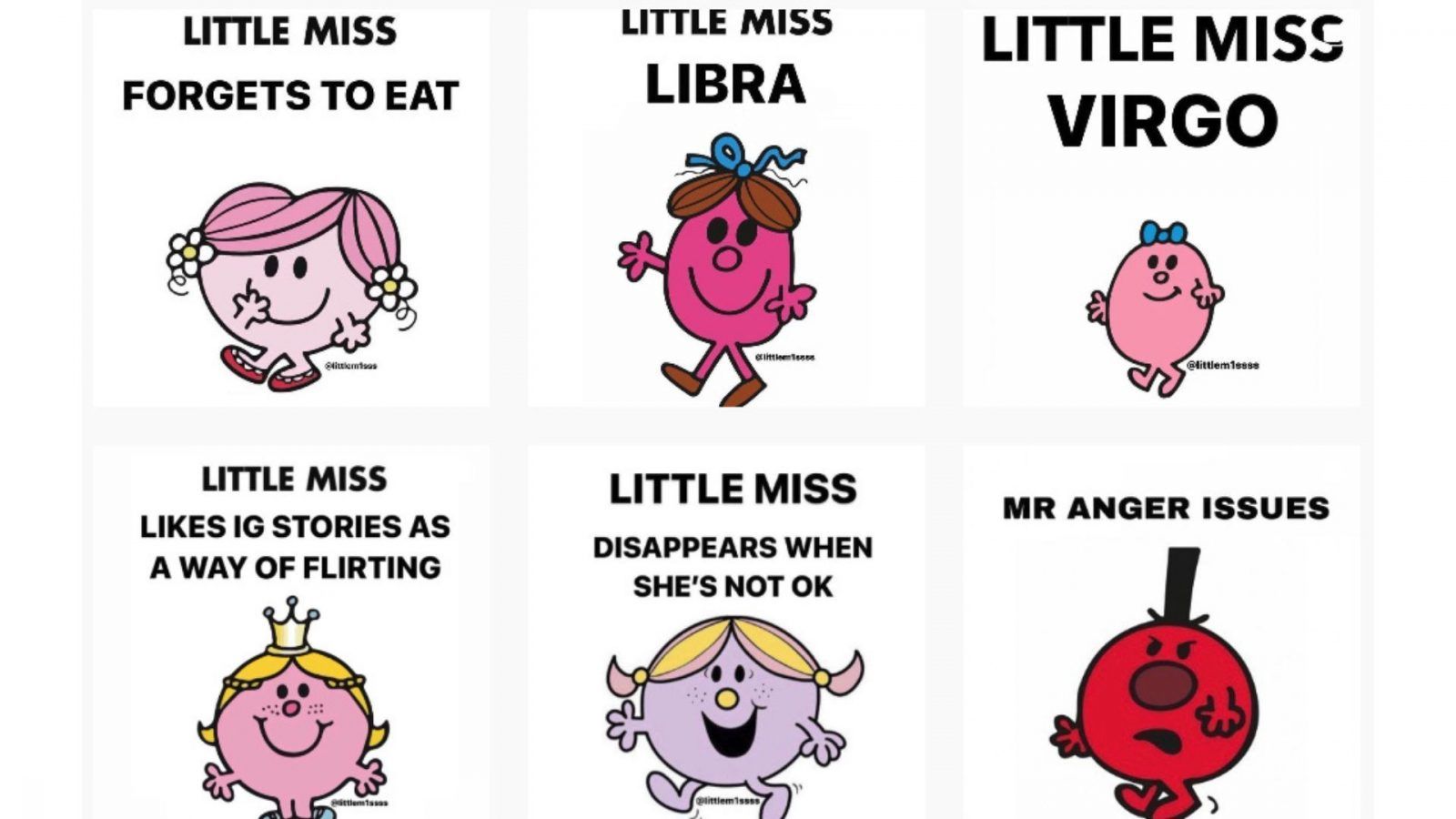 Why are ‘Mr. Men and Little Miss’ memes all over social media right now?

Culture
Why are ‘Mr. Men and Little Miss’ memes all over social media right now?
Share this article
Next article

You’ve probably noticed that “Mr. Men and Little Miss” characters are everywhere right now, as part of a viral trend that’s taking over Twitter, Instagram, and TikTok. Here’s the reason why.

Far from the simple and cute characters of the original books, these 2022 reboots are being used to highlight darker, more toxic sides of people’s personalities and attitudes — although always with humour.

On social networks, trauma has become one of the driving forces of online humor. Making fun of one’s own toxic traits or about difficult situations from the past is an endless source of content for users of these platforms, especially when it comes to making memes. And all of this is reflected in a new viral social media trend involving the “Mr. Men and Little Miss” books and characters.

The “Mr. Men” and “Little Miss” series of books were launched in 1971 and 1981 respectively by the British author Roger Hargreaves, and were all themed on particular character traits, such as Mr. Nosy, Little Miss Brave, etc. But they were always politically correct traits. If the books have been a hit for decades, the trend for all things eighties — riding high on social networks — has helped turn them into a viral hit, 2022-style.

This time, the “Mr. Men and Little Miss” characters have veered away from political correctness. From toxic traits and insecurities to illness and emotional trauma, users have seized on this meme to share intimate aspects of their own lives and poke fun at their situation: “Little Miss cries herself to sleep every night,” “Little Miss house is a mess because she’s depressed, “Little Miss stressed and sad thinking about her future every night.” This kind of behaviour is often seen on social networks, where people can speak more freely and where showing oneself in a more authentic light — complete with flaws — is becoming increasingly common. And it works! On Twitter, some posts have scored over 60,000 “Likes.”

The origin of the first such meme is credited to @juulpuppy, who posted a first version of “Little Miss Borderline Personality Disorder” on April 19 on Instagram, but the trend only went viral in mid-July. This account is well known for creating original memes on the Meta-owned platform. On Instagram, the hashtags #LittleMissMemes and #LittleMiss have over 5,000 and over 404,000 posts respectively, while on TikTok, the hashtags #LittleMiss and #LittleMissTrend score 103.3 million views and 1.6 million views.

Since then, brands like Poosh, Kourtney Kardashian’s lifestyle site, have even posted their own takes on the “Little Miss” trend on Instagram. Then, the brand Sandro launched its Sandro x Mr Men Little Miss collection.

And, by happy coincidence, July 26 sees the movie “Little Miss Sunshine” celebrate the 16th anniversary since its US release, benefitting from a well-timed boost on social networks.

Instagram Social Media memes
You might also like ...
Culture
This month in memes: July
Culture
6 Bangkok meme accounts to follow on Instagram and relate so hard
Culture
This month in memes: June
Gear
The new Instagram features for 2022 that we already love
Lifestyle Asia
Here's where you can read the latest news and stories from Lifestyle Asia and our sister titles PrestigeOnline and Augustman, curated from all of our editions in Hong Kong, Singapore, Kuala Lumpur, Bangkok and India.
Luxury
Sign up for our newsletters to have the latest stories delivered straight to your inbox every week.