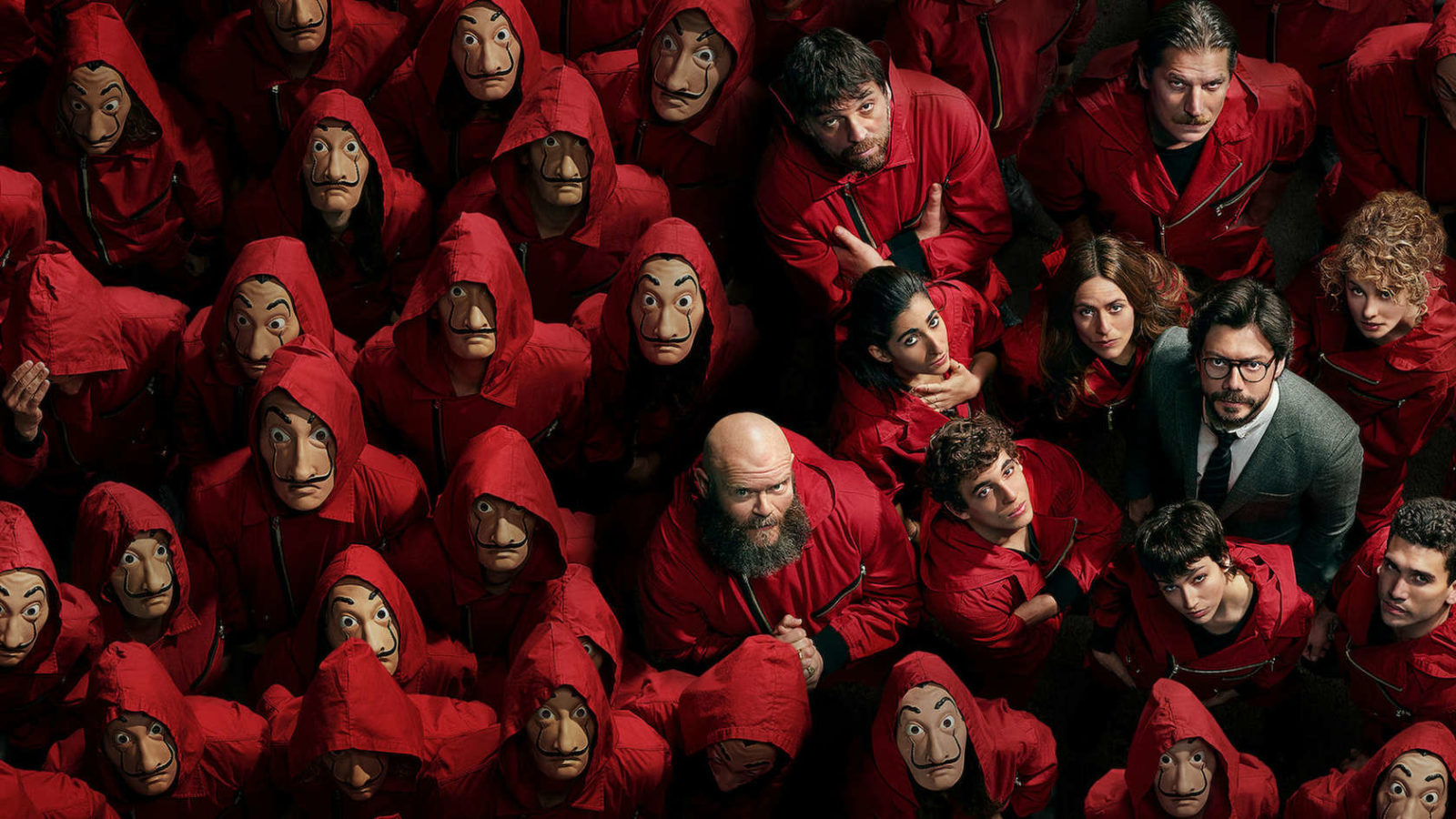 If you’ve heard about the hype around Money Heist and Dark, you’ll know that whilst British and American shows get a lot of the attention, European Netflix shows are actually really beginning to stand up to them.

There’s certainly no lack of English series to catch on Netflix but the rest of the world — particularly the non-English speaking producers of Europe too have plenty to offer.

If you’re looking for something new and “exotic”, we have you covered, with these bafflingly underrated European TV series that is deserving of your precious couch time — especially over this long weekend.

Álex Pina’s La Casa de Papel is the first out of our recommendation bag, not just because it’s the oldest on this list; it’s also Netflix’s most-watched non-English language series. How popular, you ask? According to data firm Parrot Analytics via Observer, it was 31.75 times more in-demand than the average series globally, surpassing Game of Thrones, The Walking Dead, Brooklyn Nine-Nine, and Westworld. So never mind its uncreative title, or the effort it takes to read the subtitles (the American-English dub is rather — I have to say — unconvincing). The Professor and his gang of sexy outlaws, all code-named after cities of the world, will keep you on the edge of your seat with its brilliant, seemingly-flawless-but-ultimately-chaotic plans, fascinatingly complex characters, moral conundrums, political underpinnings, and frenetic, relentless pace that leaves you with an energised delirium after every episode. Yes, it’s a slick heist thriller with crazy-huge ambitions — robbing 2.4 billion euros from the Royal Mint of Spain in the first two seasons, and gold from the Bank of Spain to force the release of their comrade Rio in the third and fourth — with an added layer of poetry, elegance, and passion not usually seen in heist classics.

Now, if you’re already a fan, you’ll be pleased to know that season 5 is now in the works, as Pina revealed in an Instagram post just days ago. It’s likely we won’t be seeing the Professor and his crew for a while, but in the meantime you may want to fill up your couch time the other great hits below.  — CL

Sci-fi thriller Dark is the first German original series to debut on Netflix, leaving large shoes to fill for its successors. “The end is a beginning, and the beginning, an end” goes a key quote in Dark that binds its labyrinth world. Dark is sometimes compared to Stranger Things but the similarities stop at its themes of time travel, mystery, and nostalgia. The plot is deliciously cerebral with mind-blowing revelation after revelation revealed throughout its three seasons, with the third recently released to unanimously positive reception. The series follows four families in the small town of Winden, each entangled in a sinister web with protagonist Jonas Kahnwald at the centre of it all. Everything unravels when a child goes missing, echoing past tragedies. Couple this mystery with excellent cinematography and a beautiful yet unsettling score, and you’ve yourself a winner. A tip courtesy of every single person who has watched Dark: Follow the family tree, because it’s the only way you can make sense of a plot that simply doesn’t make sense.

Here’s where the spoilers begin for season two and three. Dark tackles time travel theories of the bootstrap paradox, quantum entanglement, and loopholes. These are what allow for ludicrous notions, such as how one’s daughter can also be one’s mother. And if you thought trying to make sense of multiple timelines was confusing enough, the plot in season two soon reveals the existence of other worlds. Everything is inexplicably linked in a knot, resulting in an infinite repetition of cycles and experiences that overlap and occur no matter how hard the characters try to change the circumstances.

You simply can’t binge this show. Every end of the episode requires deep thinking and Googling (read: Reddit) for answers. When you find yourself exhausted from mental gymnastics, know this: All will be answered in its final heartbreaking but poignant episode. Stellar reviews across the board share a similar sentiment: If there’s one show you have to watch this year, make it Dark. — NS

In a not-too-distant past, Sweden was one of the biggest exporters of jihadists in Europe, and this nail-biting, eight-episode Swedish drama is a throwback to the time where the threat of international terrorism loomed over everyone’s heads. Gripping and full of strong female characters, the series examines radicalisation in the Islamic world, intertwining the stories of three women — one who is married to a jihadist living in Syria and desperately wants to return home to Sweden (Pervin), an intelligence officer who tries to help her (Fatima), and a young girl from a secular immigrant Muslim family (Sulle) but gets radicalised, together with her friends, by a ISIS recruiter who works in her school. Sulle’s story echoes the Bethal Green trio from the UK, who were lured to move from London to Syria when they were 15. The show also raises questions about the radicalised when they return home. Are they truly free? Will they go back to their old ways? Will the authorities trust them again? It’s an eye-opener into the world of religious fundamentalism and how scarily easy it is to recruit impressionable minds. A must-watch.  — SKP

Documentaries aren’t for everyone, but Rise of Empires makes history palatable and epic. This Turkish docudrama is as epic as its trailer, and we have, in large parts, the narrator to thank for it. The series is narrated by Charles Dance, otherwise known as Tywin Lannister in Game of Thrones (GoT).

This is no GoT, but it certainly does have grisly thrills, blood-curling spills, and backstabbing conquests of  empirical drama. Here’s the gist: 21-year-old Ottoman Sultan Mehmed II (known as Mehmed the Conqueror) embarks on a siege to take the Byzantine capital of Constantinople. A little background: Constantinople, which is modern day Istanbul, was once the capital of the thriving Roman empire, and was known for its incredible wealth. It endured many sieges from 23 armies but it was Mehmed II who finally succeeded.

Historians fill in the blanks in between live action acting. The six-episode series takes you through conspiracies, strategising, and breathless large-scale warfare. It’s not entirely accurate but it’s digestible and binge-watcheable while being educational. What’s not to like? — NS

Adapted from the Polish sci-fi novel The Old Axolotl by Jacek Dukaj, Netflix’s first Belgian original series is an apocalyptic drama thriller follows a group of people who are hijacked by an crazy-eyed Italian military guy while on board a red-eye flight from Brussels. Terenzio, the hijacker, convinced that the sun is killing everything in its path, forces an early take-off, trapping strangers from all over the world in an aircraft as they fly west and into the darkness.

Given the current circumstances of the world, a show about people dropping like flies for some strange reason is pointed and, perhaps, a little bit of a tough sell for some (as if we need to be reminded that we’re indeed in the middle of a pandemic). But what makes Into The Night a worthy watch is its intimate exploration of the human condition — our diversity, such as language, prejudices and self-interests, and our universality in terms of resilience and the desire to survive. Plus, there are only six episodes in the first second, which won’t take long for you to get through. — CL

Netflix’s first Danish series has an all too familiar premise but it still makes a great watch. Its premise is simple enough: A virus carried by the rain wipes out Scandinavia. Siblings Simone and Rasmus, who suffers from a strange illness, seek refuge in an underground bunker and part ways with their scientist father. They remain there for six years and decide to leave to find out if there remains a world above ground. They then meet another group of survivors. What happens next is the stuff of dreams for those who love survivalist dramas.

We’d recommend pushing through with the series despite its initially cliched plot. But quite unlike the Americanised, blownout apocalyptic effects in movies like War after the Worlds and The Day after Tomorrow, The Rain moves at a stealthy, fast pace. What takes The Rain beyond any dystopian young adult series is the consistent upkeep of mystery and action with layered characters, who are fleshed out through flashbacks of their past narratives, woven through the troubling present. — NS

This article was first published on Prestige Singapore, as well as on Lifestyle Asia Singapore.

Entertainment Netflix Streaming
You might also like ...
Culture
10 pandemic-themed tv shows and movies to watch because why not
Culture
Why ‘Snowpiercer’ on Netflix is making all the right noise
Beauty & Grooming
’13 Reasons Why’ star Katherine Langford is the new face of L’Oreal Paris
Culture
10 horror movies on Netflix for an ultimate spook-fest this weekend
Crystal Lee, Nafeesa Saini, and Simran Kaur Panaech
Entertainment