The Queen’s Cup Pink Polo 2019 is an annual event that’s usually one of the most anticipated by Thai society, every year welcoming more of Thailand’s equestrian lovers and socialites into the green pastures of the Thai Polo & Equestrian Club in Pattaya. This year’s event was warmly attended by Thai society’s creme de la creme, who – filled with giving hearts – gathered to watch the women’s polo tournament and support the cause. As is the case every year, all proceeds from the event were donated to The Queen Sirikit Centre for Breast Cancer Foundation, a charity supporting many women in their battle against breast cancer.

This year’s polo tournament, an annual event in its 11th year, was co-organised by the president of B.Grimm Group, Dr Harald Link, alongside the president of the Thailand Equestrian Federation (TEF), Thailand’s first female polo player and founder of the charity lady polo tournament, Nunthinee Tanner. The occasion also saw support from the United States Polo Association and BMW Thailand.

With lovely and sizzling hot weather conditions, the occasion was not merely centred around just a polo tournament, but was a full enjoyable day out for all that attended, featuring an array of things to do and see: namely, the vintage flea market, the fancy dog fashion show by the Yorkshire Terrier Club Thailand, led by ‘Khun Perfume’, the pet of Her Royal Highness Princess Sirivannavari Nariratana; rides on the Lampang Horse Carriages and the much-talked-about fashion show by celebrities riding horseback wearing sporty and beautiful attire alongside young horse riders looking just as stylish.

A number of notable names attended the event, including the German ambassador to Thailand, H.E. George Schmidt and an enchanting list of VIPs and celebrities, including Siriyos Devahastin Na Ayudhya, Lee and Pattharapol Puengboonpra, ML Ubolwadee Jayankura, Vee Marr, Krisna and Krittaya Thiengtham,Tommy and Mira Kittichaiwong, Siriporn Panupong and many more. An added highlight of the day was the ‘Best Hat’ award, which was presented to Marie-Nicole Roy who turned many heads with her elegant hat, as well as the ‘Best Dress’ award, which was presented to Angel Zhang.

What really got the crowd going was the match all were there for: the exciting opening game between the Thai Polo Team and 1003 Polo team from China. Set against the idyllic landscape of the Thai Polo & Equestrian Club, the thrilling match was four chukkas (7 minutes each) long. It was in the last chukka that the Thai Polo Team finally claimed the championship, beating the 1003 Polo Team at 7-3. The eventful day ended with a bang vis-a-vis the stunning fireworks display, and in warm anticipation of next year’s Pink Polo match. Scroll down for all the beautiful pictures from the day. 2
Dr Harald Link, President of B.Grimm Group and President of the Thailand Equestrian Federation (center)  and Nunthinee Tanner (wearing sunglasses in center), the chairman of organizing committee for ‘Queen’s Cup Pink Polo’ posing with celebrities for the horseback fashion show 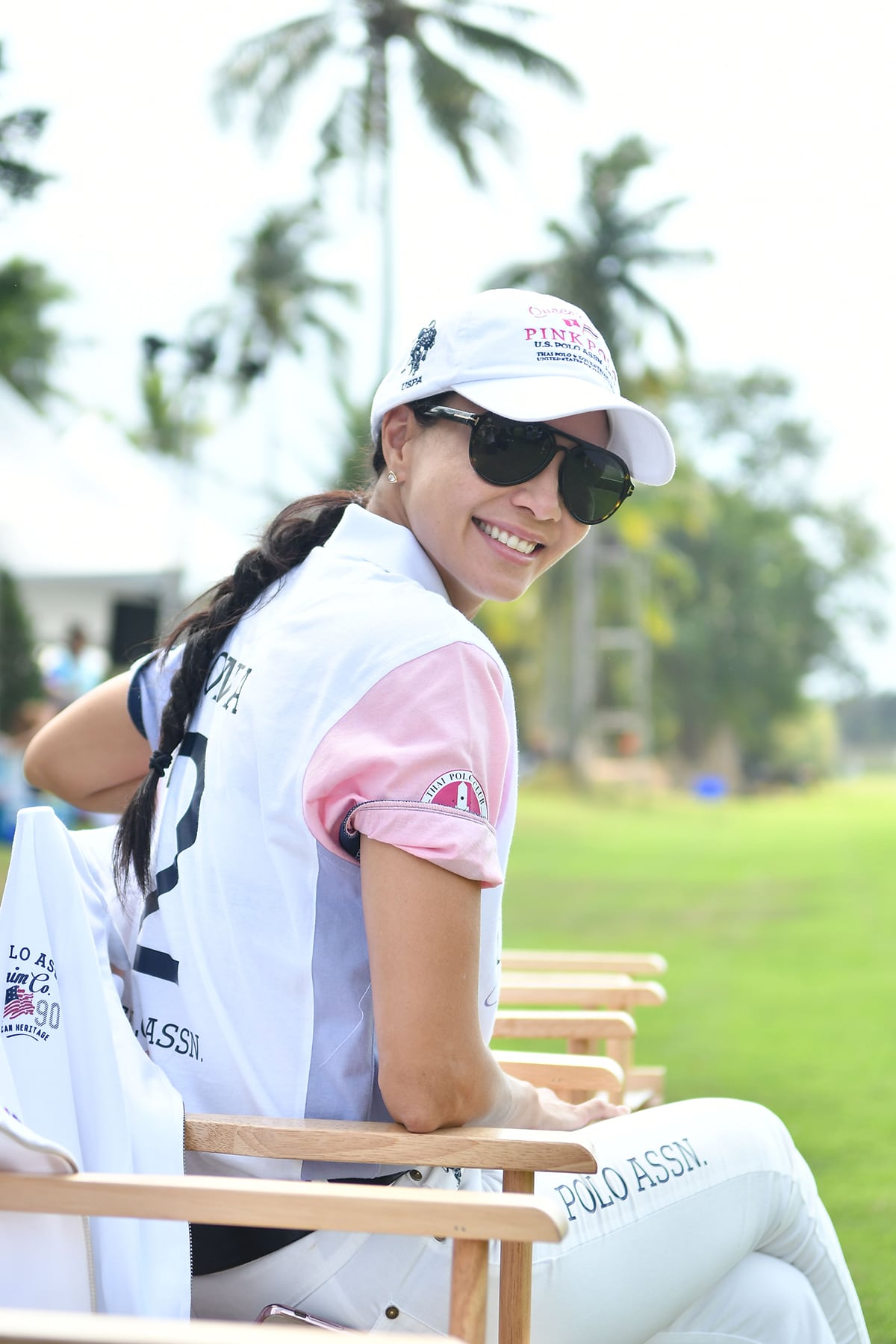 10
The polo match in action, between the Thai Polo Team (pink) and the 1003 Polo Team from China (blue) 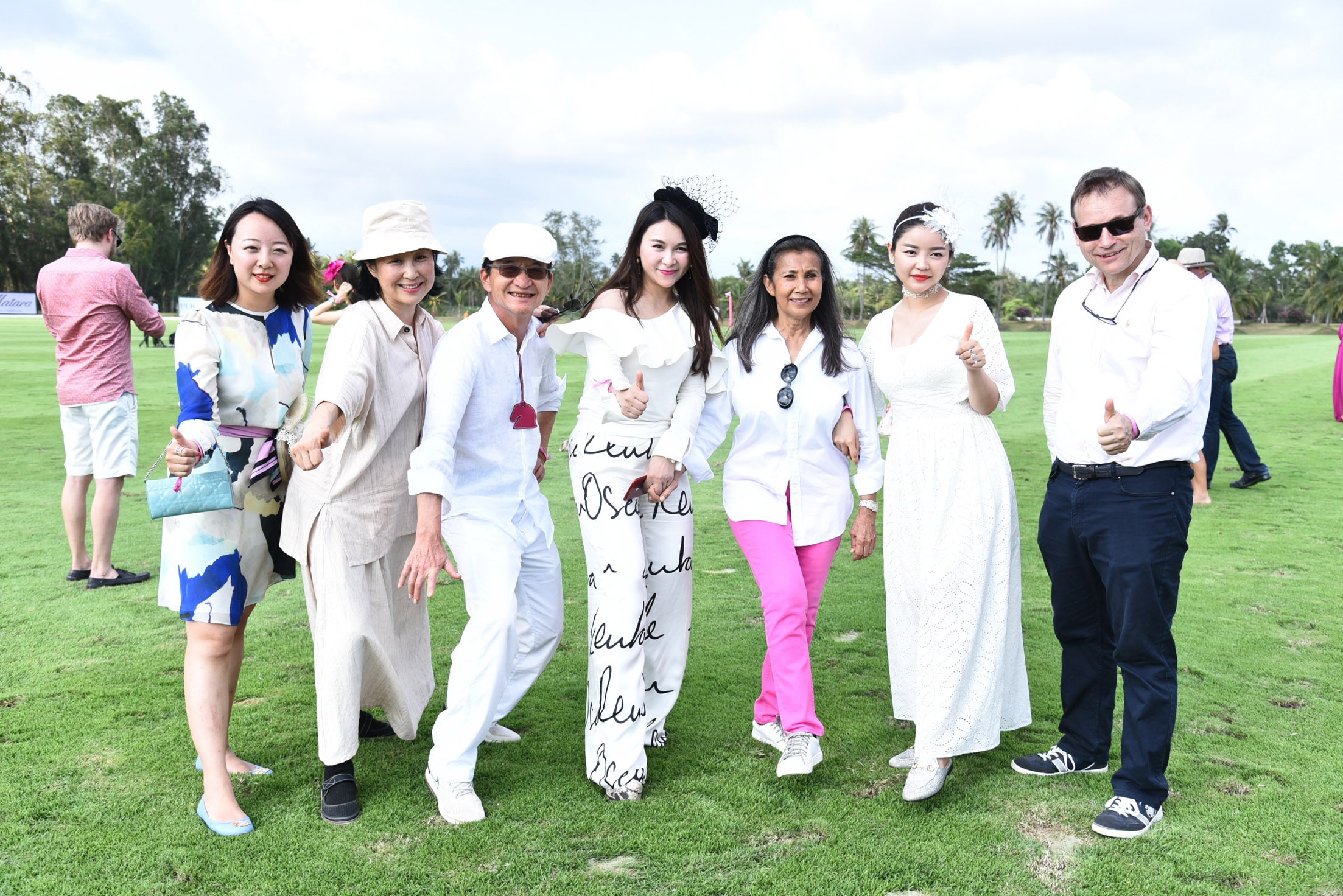