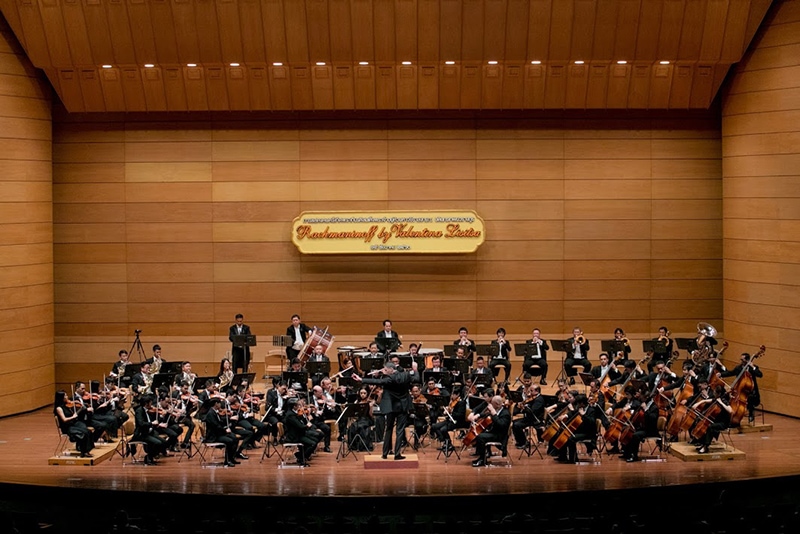 RBSO brings a German heritage of classical music to Bangkok

The home of the legendary composers Bach and Beethoven, Germany has blessed the world of classical music with some of the rarest gems in music history. Standing proud in the international music scene, we are not surprised that this time the Royal Bangkok Symphony Orchestra will be celebrating the German passion. RBSO has continued to cultivate the passion for classical music in Thailand as the country’s cultural ambassador to nurture the appreciation for music, both locally and internationally.

This month, Globally acclaimed German pianist Katharina Treutler is making her debut in Bangkok and we are excited to hear her play Clara Schumann’s Piano Concerto in A minor Op.7. Under the baton of Charles Olivieri-Munroe, the sweet-sounding evening will be jazzed up with his magical touch. Olivieri-Munroe is highly esteemed, and he is recognised for his charisma to connect with the broad audience as well as his passion for crafting pure orchestral sound. Since 1997, Olivieri-Munroe has been positioned as the honorary chief conductor at North Czech Philharmonic Orchestra.

In the canon of classical music, the German composition will mesmerise you and please your ears with the most romantic harmonies. The “Hungarian Rhapsody – German Passion” will sweep you off your feet with some intense, dramatic high notes.

On Friday night, expect to hear one of the most renowned pieces of the 19 Hungarian Rhapsodies — Franz Liszt’s dramatic showpiece Hungarian Rhapsody No.2 in C-sharp minor. The Hungarian-born pianist, Franz Liszt, not only was an enormous influence during the Romantic era, but he was arguably one of the most famous composers during the 19thcentury. Clara Schumann’s Piano Concerto in A minor Op.7 will envelope you in her beautiful melodious orchestration. Robert Schumann’s extraordinary musical piece known as the Introduction and Allegro Appassionato in G major Op.92 is not to be missed. Lastly, dazzle in Liszt’s enchanting symphony, the Les preludes (the third of Liszt’s thirteen symphonic poems).

In an exclusive interview, find out what you need to know about one of the bright stars of the evening, Katharina Treutler.

Born in Germany, Treutler was very young when she started her musical journey. “At the age of 7 when I started playing piano, I received my first piano concert through a telephone conversation,” Treutler shared.

Treutler has a deep connection with Schumann’s musical piece which she will be tuning into for the night. “This year marks Clara Schumann’s 200th birthday so it’s a great occasion to play Clara Schumann’s Piano Concerto in A minor Op.7. She is one of the most remarkable female composers of her time and a true pioneer who left a great impact on the history of classical music. She was not only the wife of Robert Schumann, but she was an exceptional lady who broke all the barriers in society by being a successful woman in the music industry. For me, her music career has been really inspiring. She wrote some beautiful music compositions that are not very often played in orchestras. I think we should not forget her and continue to keep her music alive,” Treutler expressed.

Treutler recalls an incident that is still very vivid in her mind. “I was 16 years old when I first listened to Daniel Barenboim’s orchestra project while he was rehearsing with his West-Eastern Divan Orchestra group in Weimar, which happens to be close to my home country. I was so impressed to see so many people participating in the workshop, coming from countries that faced conflict with each other. Despite the political divides in the Middle East, the West-Eastern Divan orchestra brought together people who were enemies — it was so inspiring that music could bring peace and do the impossible. The love for music brought them together.”

When asked if there was one song she could never get tired of playing, she suggested that Franz Schubert’s Impromptus (which is a series of eight pieces) is her all-time favourite.

For all music lovers out there, be there with bells on to be enlightened with some soulful performance. RBSO’s concert has been organised by the Ministry of Culture, Department of Cultural Promotion and Tourism Authority of Thailand with the support of B.Grimm. Under the Royal Patronage of Her Royal Highness Princess Sirivannavari Nariratana, RBSO continues to strive in spreading the knowledge of classical music for our younger generations.

The  “Hungarian Rhapsody – German Passion” will be held on Friday 6 September 2019 8pm at Thailand Cultural Centre. Ticket prices include (THB 400, THB 800, THB 1,200, THB 1,600, and THB 2,000). To get your tickets, visit thaimajorticket.com. For more information about RBSO, visit bangkoksymphony.org.

Musical culture events RBSO german classical music
Alisha Pawa
Writer
Alisha is a passionate dancer and is always creating her own choreographies. She is a fan of rom-com novels, a coffee-drinker who loves tea, and is always on-the-go for her midnight chocolate cravings. She hopes to tick-off her never-ending bucket list one day by hosting her own travel show.
Beauty Fashion Arts and Culture Travel