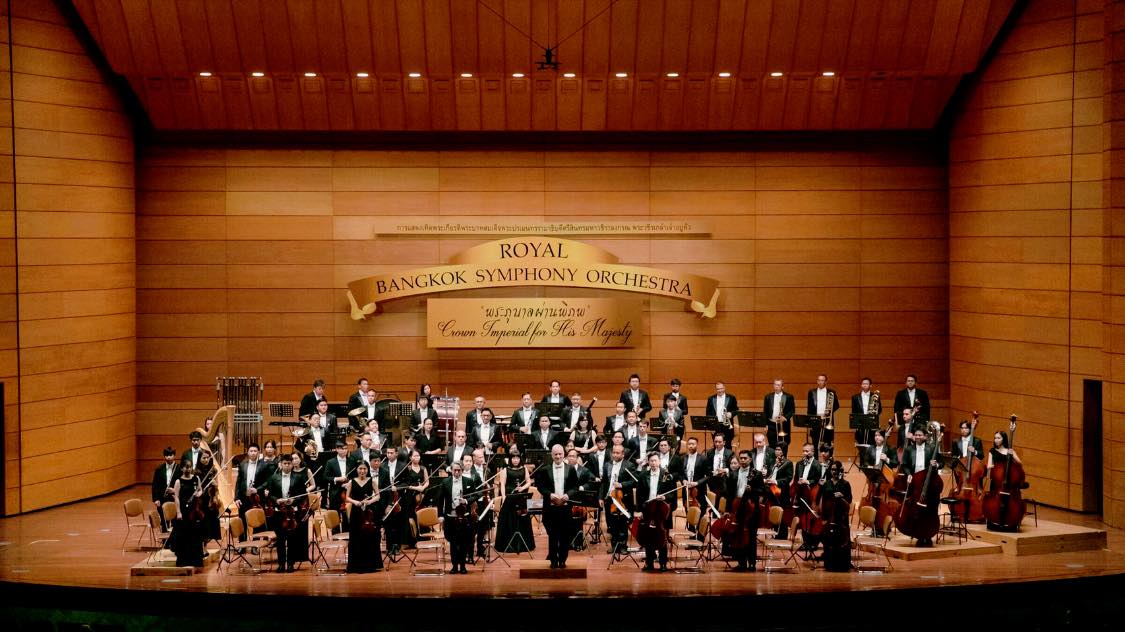 Get a glimpse of the thrilling world of orchestral music this month with RBSO’s return of another sweet-sounding night filled with classical favourites. Whilst this concert celebrates the modifications of classical music during the Romanticism movement, it is also dedicated to honour the His Majesty the late King Bhumibol Adulyadej.

The Royal Bangkok Symphony Orchestra has been a leading cultural institution in Thailand’s art scene, offering orchestral music for the community. This time, the “German Heroism – Austrian Charm” concert brings a treat for all classical music lovers to revel in Beethoven’s Symphony No.7 in A major, Op.92, Weber’s Der Freischutz, Overture, and Mozart’s Piano Concerto No.9 in E-flat major, K.271 (Jeunehomme).

Meet the stars of the night

Under the spirited leadership of conductor Michel Tilkin, the music hall will once again turn into a lively and soulful theatre attracting a diverse range of audiences across Bangkok. Known for his intensity of expression and passion for performing ensembles on international podiums, Tilkin has always brought a charismatic presence to the stage. Whether he is conducting one of his home country orchestras or renowned international orchestras, his global experience makes him a gem in Music industry. This concert also marks his return as a conductor at RBSO after a short break.

Greek pianist Titos Gouvelis is currently a professor at Athens Conservatory and also writes the programming for the Athens Megaron Concert Hall. Gouvelis has won several prizes in various piano competitions in Greece and abroad including the ‘Mykoniou’ prize form the Academy of Athens. As a soloist, he has performed at the Royal Scottish National Orchestra, State Philharmonic of Transylvania, and Cyprus Symphony Orchestra, just to name a few. You may have even heard his melodious sonatas on Spotify. RBSO’s concert will once again bring this duo together to create some magic in the air.

Legends you will hear

We’ve all been fans of Ludwig van Beethoven’s brilliant contribution to the world of music. But what makes his Symphony No.7 in A Major, Op.2 so iconic?

Whilst the music was produced back in the summer of 1811 during the battle of Hanau in the Napoleonic Wars, the symphony rose to be one of the composer’s most excellent works. Symphony No.7 in A Major, Op.2 reflects a more light-hearted and ebullient side to Beethoven’s work, signifying the power of music and how everything can be overpowered by its force (even the composer’s deafness).

Mozart’s Piano Concert No.9 in E-flat major (K.271) Juenehomme is when “Mozart, so to speak, became Mozart,” as Michael Steinberg suitably portrays it. It was said to be the most major turning point of Wolfgang Amadeus Mozart’s life as he turned 21 and produced one of his most mature works. Whilst Mozart never really mentioned the name ‘Juenehomme’ and only had written ‘the one for the Jenomy’, biographers started referring his composition to a mysterious woman’s identity and gave it the name ‘Juenehomme’. This symphony marks the most unusual dramatic dialogues between the piano and an orchestra.

One of the true founders of Romanticism, Carl Maria von Weber is often overlooked in the history of the German romantic era. However, Der Freischüt’ became the most successful one in perfectly depicting a German romantic opera – from folk material and mysticism to a heavy dose of supernatural imagination. Weber’s Der Freischutz Overture has been acknowledged as his best work and few other symphonies can hit the stage with as much drama as this one.

RBSO’s concert has been organised by the Ministry of Culture and the Department of Cultural Promotion and Tourism Authority of Thailand with the support of B.Grimm. Under the Royal Patronage of Her Royal Highness Princess Sirivannavari Nariratana, RBSO continues to strive in spreading the knowledge of classical music for our younger generations.

Ready to hear the world’s most famous classic tunes? Mark your calendars now.

The “German Heroism – Austrian Charm” will be held on 25th October 2019 at 8 pm at Thailand Cultural Centre, Main Hall. Tickets are available at ThaiTicketMajor.com and the price range includes THB 400, THB 800, THB 1,200, THB 1,600, and THB 2,000. For more information, visit bangkoksymphony.org

Beethoven mozart RBSO Royal Bangkok Symphony Orchestra german classical music Royal Bangkok Symphony Weber
Alisha Pawa
Writer
Alisha is a passionate dancer and is always creating her own choreographies. She is a fan of rom-com novels, a coffee-drinker who loves tea, and is always on-the-go for her midnight chocolate cravings. She hopes to tick-off her never-ending bucket list one day by hosting her own travel show.
Beauty Fashion Arts and Culture Travel