Check out these new must-try dishes at Bunker Sathorn

Helmed by the creative Filipino-­American Chef Arnie Marcella, Bunker Sathorn is a New York-style restaurant serving up American cuisine with culinary touches from diverse cuisines — think along the lines of Thai, Filipino and even Mexican. 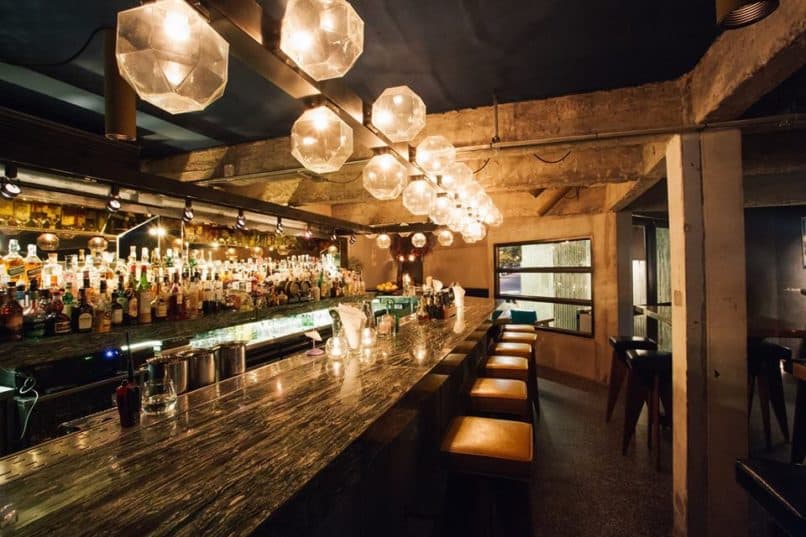 Set amongst the food enclave of Sathorn Soi 10 and 12, Bunker transforms what seems like an abandoned building into something more elegant and rustic. Downstairs, you’ll find a dim fluorescent-lit bar whilst upstairs is the dining area and open kitchen where guests will find Chef Arnold and the team vigorously whipping up dishes from scratch. Its bare concrete walls, flush mount lighting, marble and wooden accents also provide a chic yet romantic backdrop for nighttime meals. Combined with an emphasis on cooking with pristine local and imported ingredients, this makes the venue a go-to spot for gourmands crave fine food served in a relaxed yet chic setting.

This season, the restaurant again brings us their freshest dishes with some new and unique touches. From uni-infused congee to bright tomato salad and the classic Filipino heirloom fried rice, scroll down for our list of Bunker’s new must-try dishes you need to try. 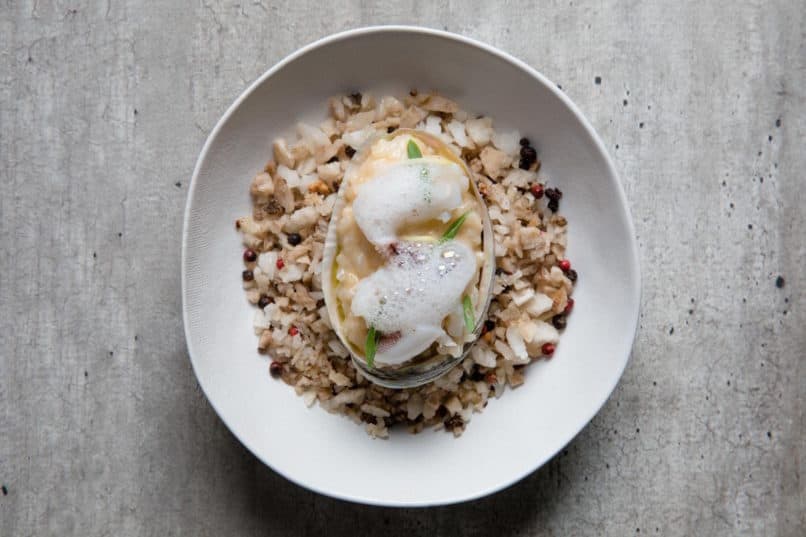 If you think that this is an Italian-born risotto, you’re deadly wrong. Known as the Thais’ staple breakfast or late-night meal, congee  —  commonly known as rice porridge — gets a new reimagined appearance at Bunker. Made with squid, Vermouth and the sea delicacy, uni or sea urchin, the slightly briny congee is filled up to the brim in a sleek oyster shell. Creamy and delightful, bless your palates with this beautiful rich sea-derived delicacy and thank us later. 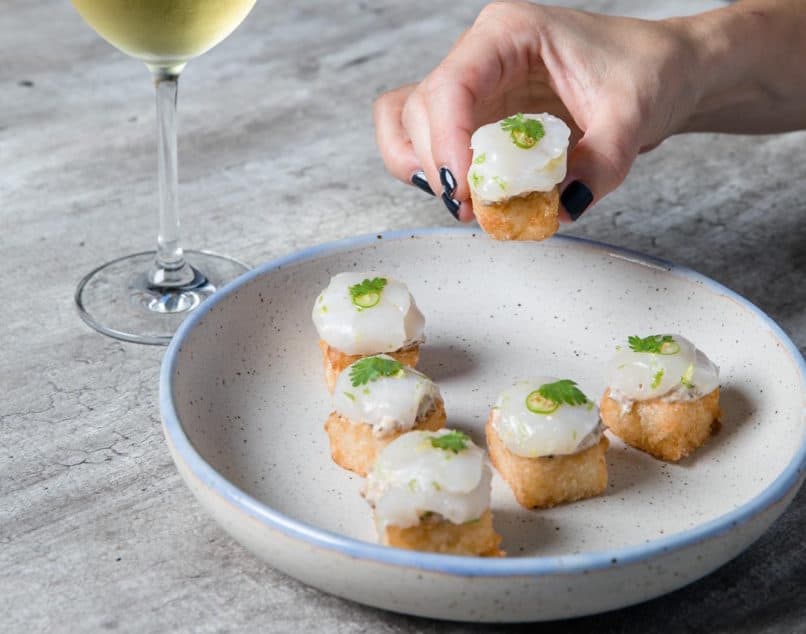 This is not super-duper new but it’s so downright delicious we had to mention it. Imagine having a golden-fried tater tot – that times ten is the deliciousness we’re talking about and that’s what Bunker’s Scallop Tots taste like. Smeared generously with yuzu kosho (yuzu chilli paste) for a little kick, the deep-fried crispy rice is then topped with raw scallops and finished with sliced chili and cilantro as a flavourful garnish. The dish makes a perfect appetizer or even bar bite to go along with your spirit or cocktail of choice. 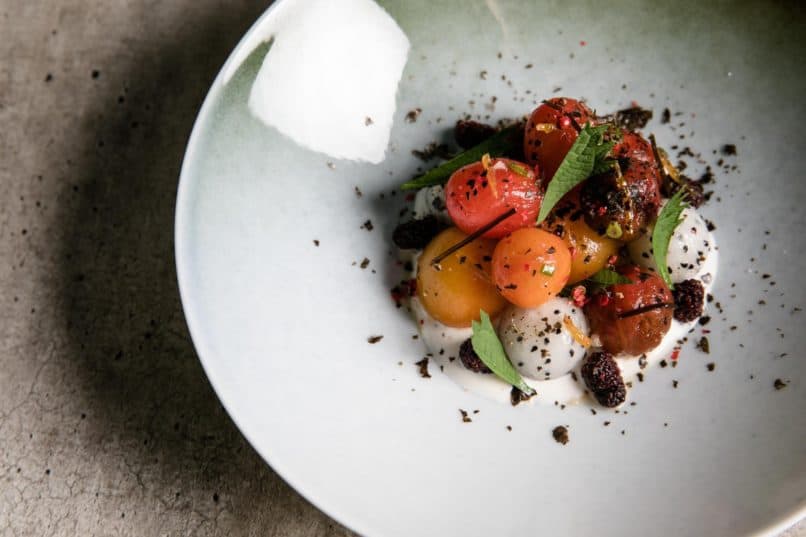 Bunker has given us motivation to start having salad for dinner. Their Chiang Mai Tomato Salad has features everything we adore most about summer produce. First, a trio of Chiang Mai tomatoes in assorted colours are peeled and left bare for the smoothest texture before getting mixed with mulberries, candied yuzu and carved dragon fruit. The salad mixture is then placed atop a bed of almond ricotta that works as a nutty dressing for this dish. Craving a light and bright starter? This tomato salad will have you raving about it long after the summer season ends. 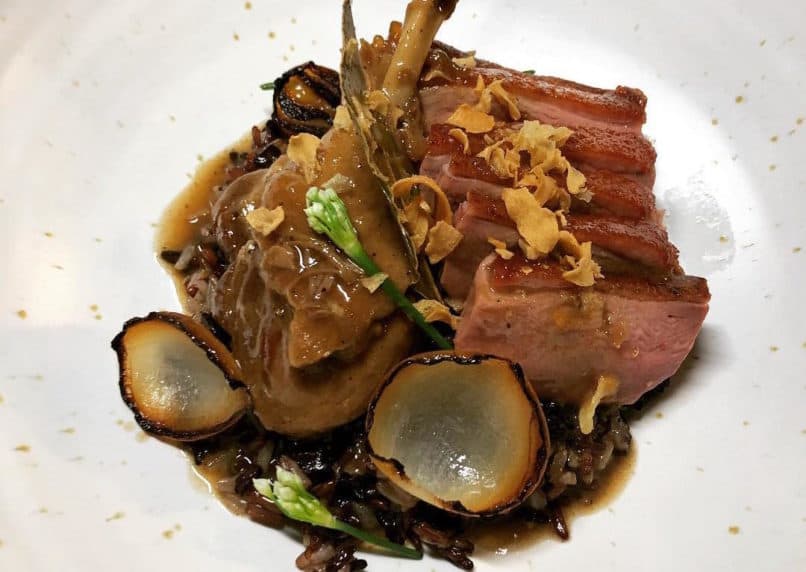 Bunker has proven that fried rice, too, can be considered fine-dining fare. Inspired by the Filipino classic “Adobo”, chicken and duck is braised until almost fork-tender in a toothsome marinade before placed atop the heirloom garlic fried rice that helps to kick the dish up a notch with its toothsome pepperiness. 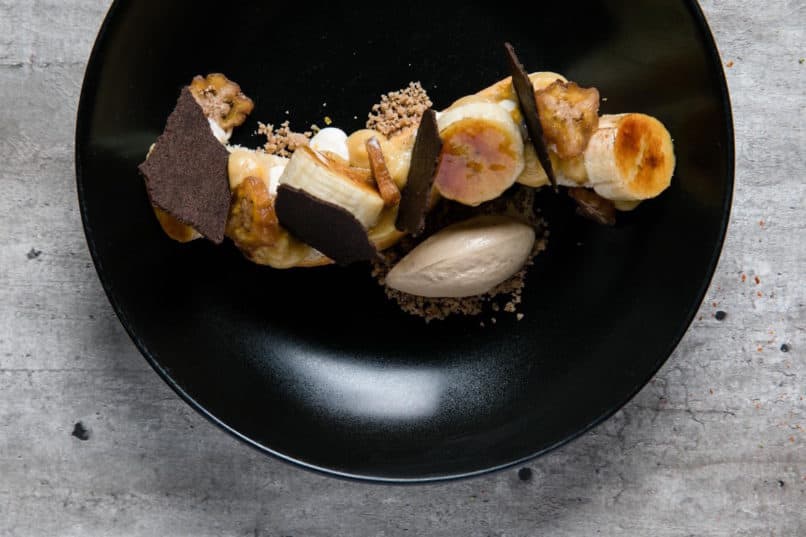 Bunker’s Banana Coffee Cake can be pretty deceiving. Although it looks like a banana split, this sweet dish actually tastes like classic banana coffee cake. Except you’ll be having toasted a coffee-swirled brioche instead of an actual cake that comes with the addition of house-made coffee ice cream, butter-enriched crumble and caramelized banana for extra textures and tastes. Get a little bit of everything on your spoon for the first wonderful bite – we guarantee the coffee and banana tastes will explode in your mouth like flavoursome bursts of joy.

Bangkok Dining Restaurants Sathorn Bunker Bunker Sathorn eatery Bunker BKK must-try restaurants chef Arnie Marcella
Kankanit Wichiantanon
Writer, Bangkok
Kankanit is a writer by day and a baker by night. If there’s one thing you should know about her, it’s that she can wax poetic about food 24/7. Her daily routine is writing, cooking, eating, repeat. They are the things that inspire her from morning 'til night.
Dining Culture Home