There was no question about it: Chef Steve Doucakis’s creations often have us addicted from the first bite.

Over at his former workplace of Little Donkey, his Mama Donut (a tom yum-flavoured doughnut made with instant noodle), his Pineapple Crème Brûlée, and his Bagel Bomb (a bagel bun loaded with cream cheese) had unquestionably pushed our palates to taste advancement. 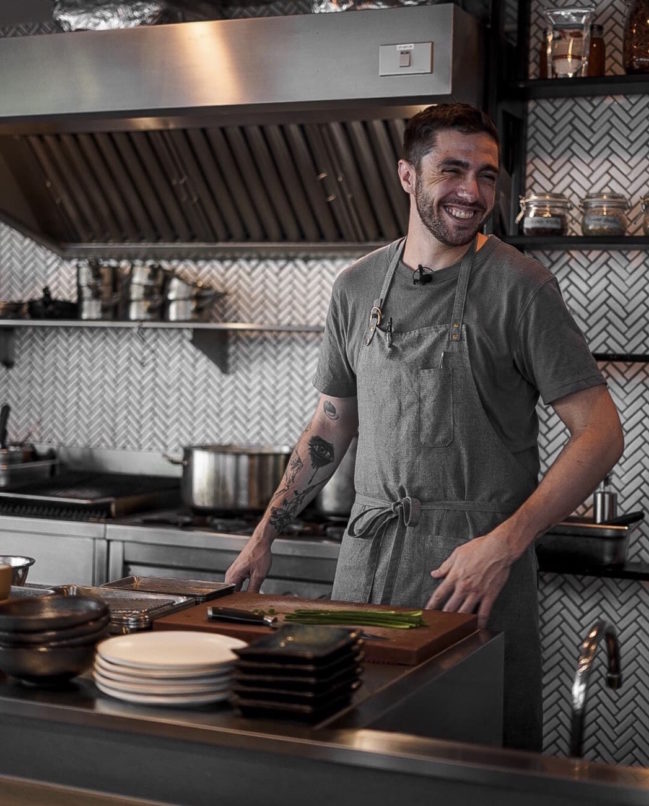 Chef Steve’s knack for marrying cuisines together, whether it’s Asian with Western or Asian with Middle Eastern, proves there’s no limit to his culinary imagination. His food reinterprets everyone’s childhood staples, elevating them to new heights yet still leaving their essences to comfort and familiarise with our taste buds.

Having former tenures at New York and Bangkok big cheeses like Jean-Georges and Isa Restaurant in New York and Bunker Sathorn in Bangkok, the fine-dining ethos is ingrained in his cooking. All the fangirls (and boys) would have also seen his appearance on TV ,where he took part in the Top Chef Thailand show back in 2018, and went with the more Thai traditional name of “Santi.” His food as a Head Chef at Little Donkey and now at his current haunt, Quince Bangkok, oozes out an haute-cuisine spirit spiked with his playful, lively, and take-it-easy personality. His dishes are both an extension of him as a chef and as an avid foodie for our plates. 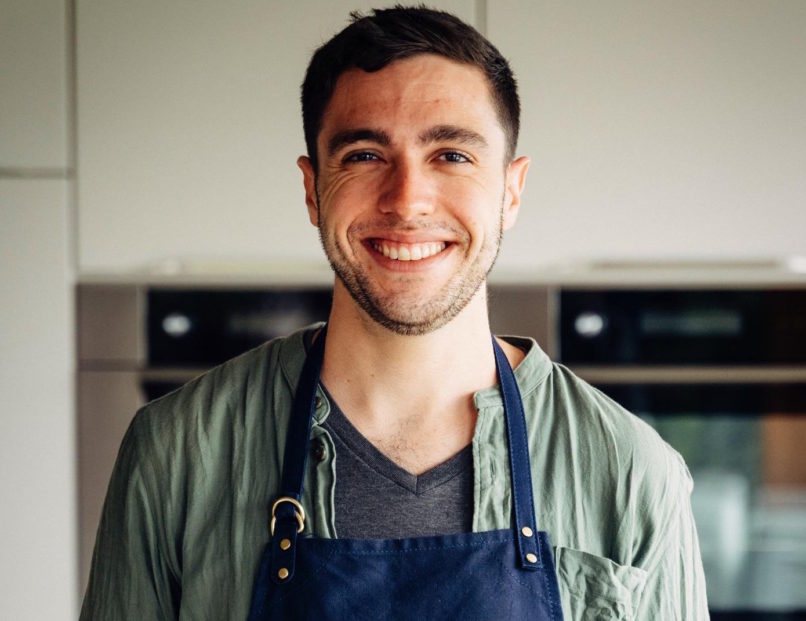 However, instead of diving deeper into his culinary inventions, this time around we’d like to pick his brain and find out where the young chef likes to go for guilty pleasure food. Here, Chef Steve Doucakis unveils to us all his favourite off-the-beaten-track restaurants and the dishes he usually gets. Read on for his list of food he likes to devour on a cheat day in Bangkok.

“To kick off my cheat day on the right foot, I would definitely have breakfast at On Lok Yun. I really like it here. Although it’s an easy breakfast, typical for Thais, it’s also nostalgic to everyone considering they serve meals consisting mainly of bacon, fried sausage, ham, fried eggs, toast, tea, and more. It has that American breakfast vibe to it. Thereby, it comes to no surprise that the food here really appeals to me. With the Chinese tea and the Chinese sausage (goon chiang), which is my favourite, the food here also has a little bit of both a Thai, Chinese, and American feel to it. The place itself is casual, fun, and cheap. I also love going to Chinatown, so that’s a plus. One thing I don’t like about this place though is the long line but for me, it’s totally worth it.”

“For lunch, I’d definitely go to H Dining. The restaurant boasts this serene and beautiful front yard so diners can sit outside or enjoy the great outdoors. It’s an old charming house dubbed with white walls and wooden elements throughout. The atmosphere is great and the food is just as amazing. The chef here, Kanta “Toiting” Siddidharm, who used to work at 80/20, Gaa, and Noma, makes a mean sourdough bread. She does casual, simple food but it’s done well and with great ingredients. She’s a very talented chef, I respect her a lot. The venue also serves coffee, wine, and alcoholic beverages, made perfect for all-day, all-night dining. So really, it’s a cool hangout spot, especially during the day. I like to get lunch here and most of the time it’d be bread – seriously you just can’t go wrong with her sourdough loaves ­– along with some butter, jam, or spreads like nut butter or house-made yoghurt. I’d then get my second cup of coffee in, and maybe a glass of wine also, because why not? [laughs] It’s a day off, right? Now that’s a chef’s cheat day for sure.” 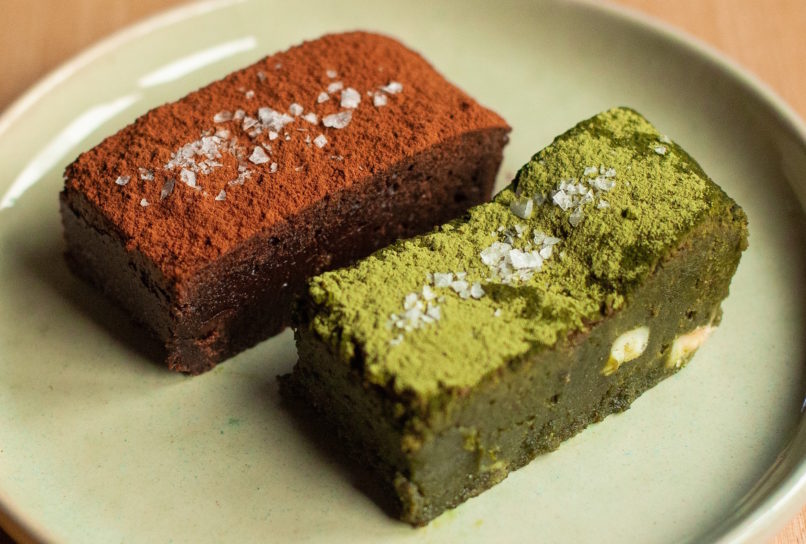 “As for the afternoon snack, I like to indulge in a good chocolate brownie from Sarnies. It’s to die for. The brownie here is barely even a brownie; the taste and texture are almost like that of a fudge. Basically, it’s a wonderful hunk of soft, sticky, and decadent chocolate. Amazing.” 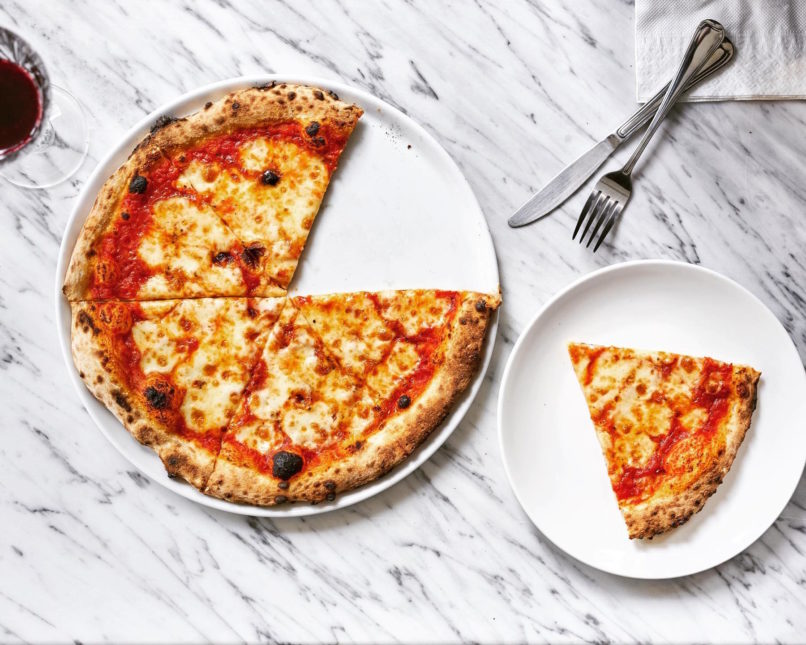 “For dinner, New York-style pie at Pizzeria Mazzie never disappoints! The owner, Jon Spearman, is from New York, and he makes these scrumptious pizzas that NYC is all about. The dough is made from scratch, using no artificial yeast, just natural leavening. And he only makes a certain number of doughs per day, meaning that if they sell out, they sell out. The setting is also very nice, I think it makes for a good date spot, too [smiles]. They also have a good selection of other American comfort foods like meatballs, salad, charcuterie, and also a range of beer and wine. What I cherish about this place is Jon’s integrity when it comes to his cooking process, which starts from the ground up. It’s a small menu with a small team but they do make everything themselves and they make it really well.” 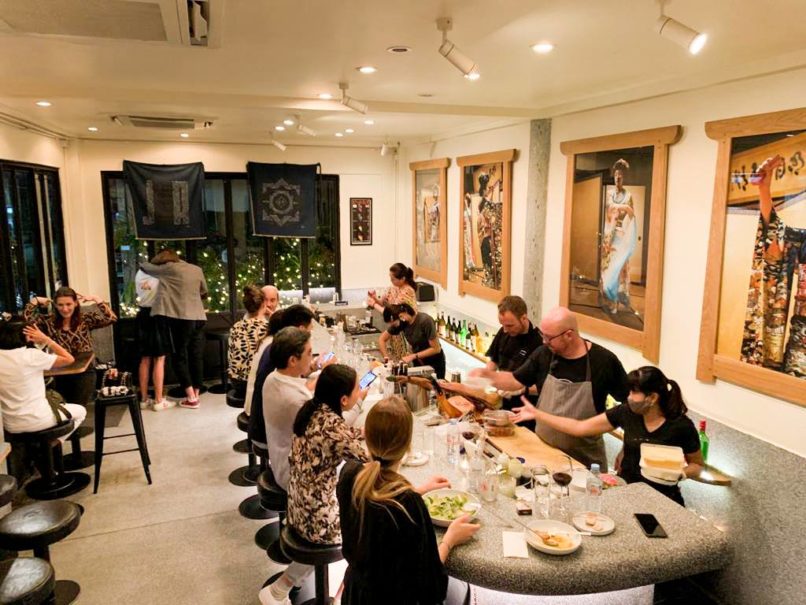 “Living in Sathorn, I spend a lot of my time in the area and the neighbourhood surrounding it, like Chinatown and the old town, and Charoenkrung. Most of my friends also live in these areas so I’ve got quite a few hangout spots we usually go to. So for the post-dinner plan, I’d definitely go out for drinks. First I’d cosy up at Jua and get myself some highballs. With Chef Chet Adkins and his co-owner Jason Lang, you’re always in a good company here. The food is good, and the music is great. It’s almost like going over to a friend’s house. Then, I’ll walk over to Tropic City. I like it because a lot of chefs and bartenders in the F&B industry also go here. You don’t need to go anywhere, and you’ll meet just meet everyone there any way. Tropic City’s playlist is also fun and upbeat. Some people dance and some just stay outside and chat. People are always walking in and out, having a good time, and just chilling. Really, a night at Tropic city is much like an event; a mini party that’s both cosy and fun.” “And since this is a proper chef’s night out… I’ll probably go for one more drink somewhere. My friend’s spot, BAR 335, is usually on the list. It’s in the Thonglor area but sometimes I just like to hop across town. Usually, I ride my motorcycle everywhere, but, well, at this point, after a couple of highballs at Jua and probably four gins at Tropic City, I won’t be driving anymore [laughs] but it’s not like that will stop me. The bar is quite hidden but I really like it because the drink here are always simple and minimalist yet very tasty. Featuring liquors from Japan, the drinks here boast a lot of Japanese elements. Sometimes they’d play country music, sometimes there’s a DJ, and sometimes people would just chill and get vibing quietly in the corner. You know, just good, pure, late-night energy. The bartender team is also friendly. It’s one of those places that you can go in alone and still have great conversations with the team and meet new people.” 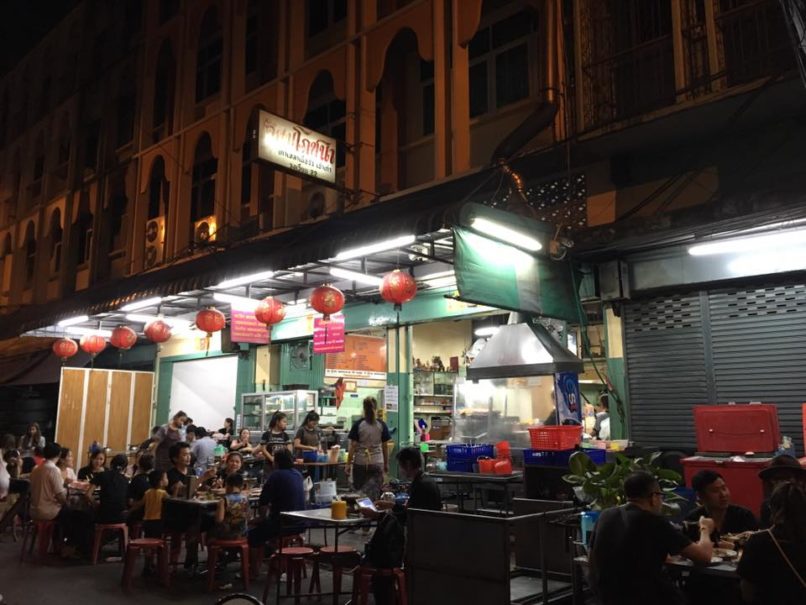 “For a super late-night meal to cap off the night, Aiem Pochana in Yaowarat is my go-to. It’s always busy here. They are known for their beef hotpot, the moo kata (Thai-style barbecue) and cook-to-order Thai food. They open until two in the morning so I usually go there with my friends and we’d have a feast. The vibe is always lively and quite chill. And the food is just cheap and super tasty. The beef hotpot would come with different cuts of meat, veggies, and also their house-made beef meatballs. We sometimes get beers and just hang out there. The sauce that comes with their moo kata is also my absolute favourite since I like to dip everything in sauce and they would serve it in a soup bowl but it just simply never seems to be enough. We’d sometimes get a couple of more beers to go with the meal and that’s how I’d end my cheat day on the right note.”

Jua Tropic City Steve Doucakis chef’s cheat day H Dining On Lok Yun
You might also like ...
Food & Drink
5 new Bangkok cafes you need to try this October 2020
Food & Drink
5 new Bangkok restaurants to try this October 2020
Style
10 new sneaker drops to know about in October 2020
Culture
10 must-see art exhibitions in Bangkok this October 2020
Kankanit Wichiantanon
Writer, Bangkok
Kankanit is a writer by day and a baker by night. If there’s one thing you should know about her, it’s that she can wax poetic about food 24/7. Her daily routine is writing, cooking, eating, repeat. They are the things that inspire her from morning 'til night.
Dining Culture Home