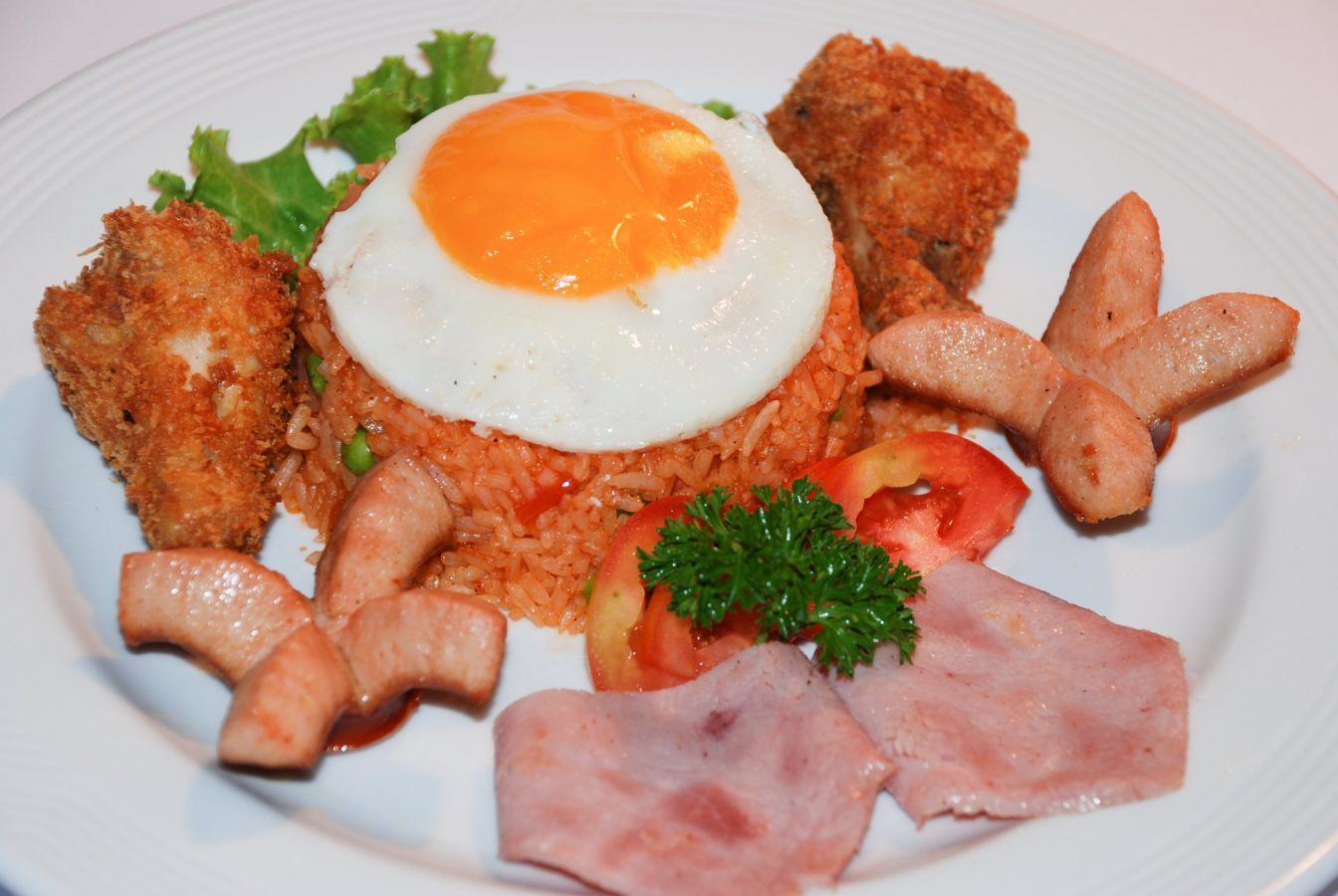 Is Jackson Wang’s American fried rice really worth the hype?

Thailand’s beloved American fried rice dish has been recommended by the one and only Jackson Wang.

In a recent interview with EFM94, Jackson Wang has revealed that when he finishes his rehearsals at around 3am, he, like many of us, pops out to Foodland. Those in the know will know that the supermarket chain has a beloved restaurant and cafe called “Took Lae Dae,” which translates to “good and cheap,” and they offer Thai and Western dishes 24 hours round the clock. Jackson says that he orders the American fried rice, along with corn soup.

“It’s the best of the best”, he praised.

What really is American fried rice?

Interestingly quite a staple dish in Thai cuisine, American fried rice is made from stir-frying rice with ketchup and other sauces to taste, then accompanying it with side ingredients such as a fried egg, fried chicken, and ham. Some iterations also include raisins, pineapples, and even croutons.

Despite the nation being in the name, it isn’t from America. In fact, it was born here in Thailand, but its true origins remain unknown. Still, there are a few stories about how this dish came to be.

In an interview with Sakul Thai magazine, Khun Ying Sureepan Maneewat claimed the American fried rice as her own creation some time before 1954 when she left for her studies in the UK. Before her departure, she worked as the manager of Don Mueng’s in-house Ratchathani Restaurant where several airline meals were cooked. One day, a flight is cancelled, and Sureepan is left with a whole lot of American breakfast—sausages, hams, and sunny-side up eggs. She then decided to use those ingredients and fry them with leftover rice, and top the creation with the sunny-side up egg. Thus, the iconic dish was born.

Another story is that the American fried rice was created in the hands of “Go Jek,” a Thai-Chinese chef serving the United States personnel stationed in Korat and Udon Thani during the Vietnam War period.

Some also believe that the dish derived from Mexican Rice, a go-to Mexican side dish made from rice, tomato, garlic, and onion. Originally appearing way back in 1910, the recipe could have spread to Thailand by American soldiers stationed in Thailand during the Cold War. If that were the case, it would explain the American fried rice’s origin, or at least establish itself as an ancestor.

Our personal favourite, however, is that it’s simply called American fried rice because it’s essentially fried rice accompanied by sides that can be seen as “American.” Ham, fried chicken, sausages—the carbs that the people of the United States value and love.

It’s pretty great, we suppose. It’s a plate full of things that has been proven to be great, so the defining factor is the restaurant you’re ordering it from. Sometimes the fried chicken is oily and that ruins the whole experience. Sometimes the restaurant overdoes it with the raisins, and the rice becomes a bit too sweet with the ketchup. Sometimes the egg isn’t runny and feels like a rubbery afterthought. One wrong component could ruin the whole dish, but if you find one that’s great, it’s a lovely dish to order for breakfast, lunch, or, like Jackson Wang, late night feasting.

Where should I get it?

A few chain restaurants have American fried rice on their menus, most notably Took Lae Dae and S&P. But since Jackson Wang’s interview came out, Took Lae Dee has really been on it with the marketing. They’ve launched a promotion: the American fried rice with corn soup combo comes at a mere THB 99 until 24 July, 2022. It’s the exact combo that Jackson Wang so greatly praised.

But if doesn’t quite satisfy your craving, we also highly recommend Mickey’s Diner.

Their American fried rice is made of your usual ingredients, but bigger and better. Sitting beside the rice are crispy bacon, huge fried chicken, sausages, ham, and corn beef. Of course, it is served with a runny egg on top. It’s premium goodness on one plate. Jackson Wang approved.