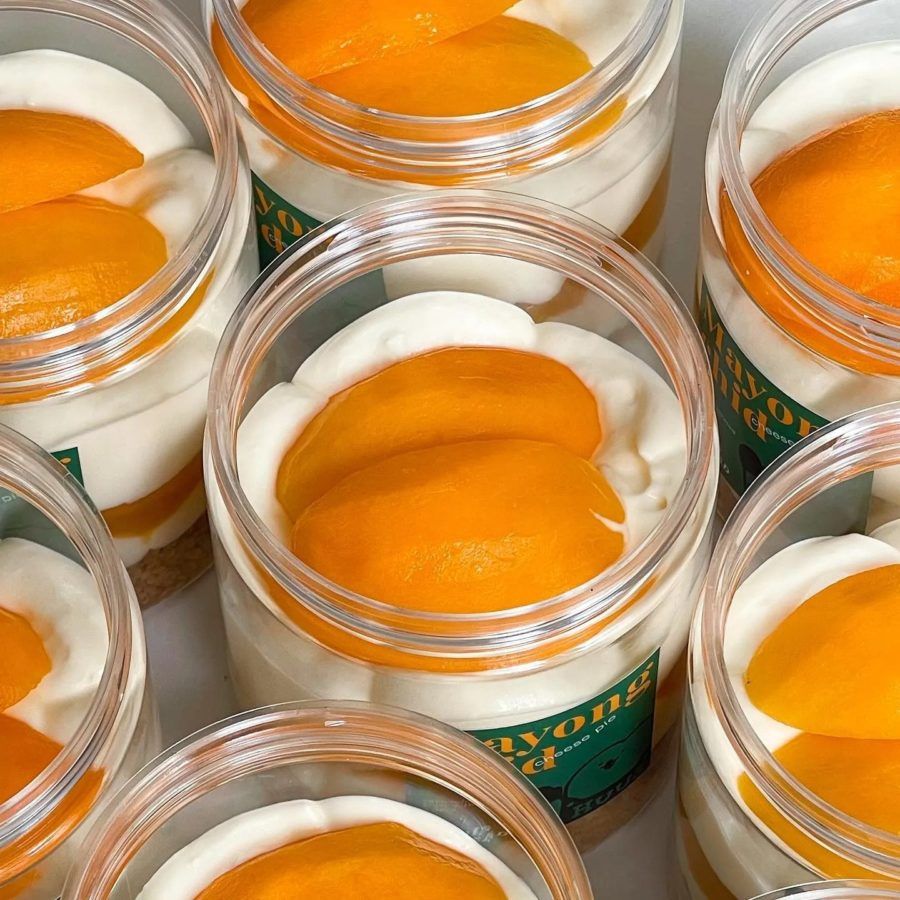 Where to order marian plum desserts in Bangkok for mayongchid season

Marian plums aren’t just meant to be eaten raw, and many sweets shops in Bangkok have elevated them into these succulent desserts. Here are the varieties of mayongchid desserts that prove this fruit’s place as the star of summer.

The period from February to April marks the season of the highly-anticipated marian plum or mayongchid. This plump, sweet and tangy fruit is already many people’s favourite on its own, but these creative marian plum desserts have made it even more sought-after. Gather around all the sweet-lovers: here is where to find the best, most gorgeous marian plum desserts in Bangkok.

Where to order the best mayongchid and marian plum desserts

Huus of Bread is a one-of-a-kind bakery house in Phra Khanong, and stands out because of its Scandinavian and French-style interior. This season, Huus of Bread is serving up the cutest pot of Mayongchid Cheese Pie. It consists of layers of the house’s special crumble base made from french AOP butter, soft cream cheese, homemade marian plum sauce and fresh marian plums from Nakhon Nayok.

Visit the shop in Phra Khanong or order via GrabFood, Lineman, Robinhood and Line Official @huusofbread.

Known as Bangkok’s sexiest bakery, The Rolling Pinn always offers the largest, gooiest, most flavourful desserts to all those with a sweet tooth. This time, they’re turning marian plum cheese pie into an ultimate summer indulgence with Mayongchid Cheese Pie Ice Cream. Made from cream cheese ice cream and mayongchid sorbet, this scoop of deliciousness is finished with homemade buttery salted biscuit crumbs.

Casual Thai restaurant Rosniyom is serving a Thai-style iced dessert featuring the seasonal marian plums served with ice and syrup. This simple treat is easy to assemble, easy to eat, and oh-so-rejuvenating. All in all, it’s the perfect fuss-free treat for summer.

Available at all branches of Rosniyom or order via Line Official @rosniyom.

The Pastry & Co., a long-established online bakeshop, has whisked up a series of marian plum desserts, and one of them is Mayongchid Choux Cream. These little choux pastries are bite-sized pieces consisting of choux pastry, custard, marian plum sauce and fresh marian plums. Apart from the choux cream, the Mayongchid Cheese Pie, Mayongchid Soft Roll, and Mayongchid Pudding Crumble are equally worth trying.

Order via Line Official only at @thepastryandco.

Holiday Pastry never misses a chance to get creative with the fruit of the season. This year, they’re presenting a luscious Mayongchid Shortcake Box and Mayongchid Cheese Pie. If you’re not a fan of cream cheese, you’ll fall in love with the shortcake, which is an assembly of light layers of chiffon cake, fresh cream, marian plum-peach-passion-fruit sauce, and a finishing touch of big fresh marian plums on top.

Visit the shop at Charoen Nakhon 10 or order via GrabFood, Robinhood and Line Official @holidaypastry.

Dining Desserts mayongchid marian plum
You might also like ...
Food & Drink
Where to find the best matcha desserts in Bangkok
Travel
What’s on the menu at After You Hong Kong, the Thai dessert chain’s first overseas branch?
Food & Drink
9 best vegan desserts to order in Bangkok
Food & Drink
Fin Wine and YORA collaborate for the perfect dessert: wine ice cream
Chayanin Thaijongrak
Dining
Sign up for our newsletters to have the latest stories delivered straight to your inbox every week.