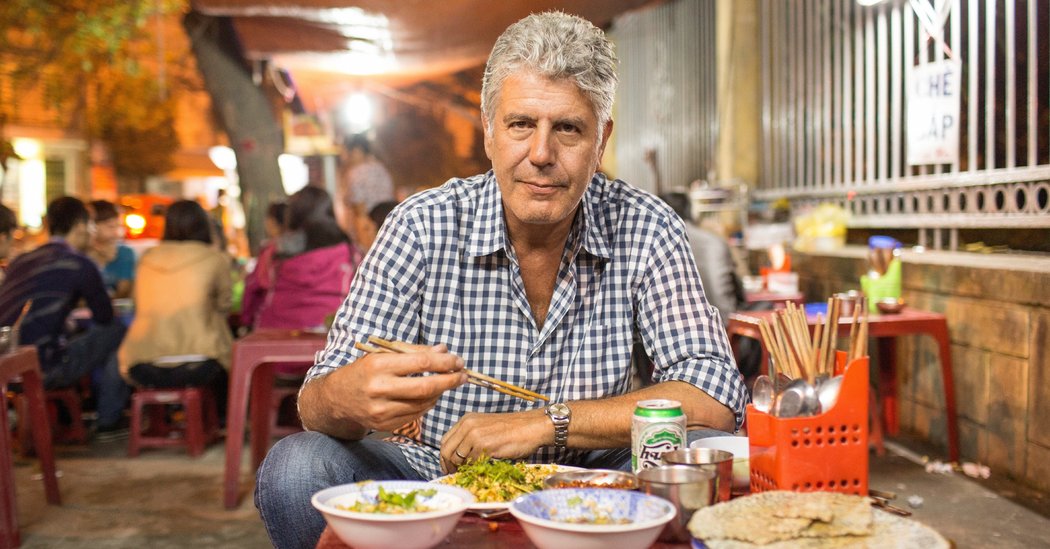 Remembering Anthony Bourdain, one of the food world’s greats

Food & Drink
Remembering Anthony Bourdain, one of the food world’s greats
Share this article
Next article

The world mourned on Friday 8 June, when the news broke that the 61-year-old Anthony Bourdain — chef, writer, television host, and for nearly two decades, culinary voyager — was found dead in his hotel room in Kaysersberg in the Alsace region of France while filming an episode for his award-winning CNN series, Parts Unknown. The cause of death was reported as suicide.

The outpouring of grief, not just in the domain of food and media, but across the world, has been monumental following the tragic news, proving just how far Bourdain travelled into the homes of nearly every person in every community and in every country around the world, just as he was ice fishing in Quebec, engaging in fervent discussions with ex-freedom fighters over a stew of heart and kidneys in the conflict zones of Libya, embracing the adrenaline rush of Tokyo’s frenzied nightlife, or floating down the Congo River, cold beer in hand while musing introspectively on Joseph Conrad’s 1890s novel set in that dark continent, Heart of Darkness.

In early days, Bourdain’s character was built in the kitchens, his rock-star demeanour and tough-as-nails exterior formed in equal parts by the extreme gang-like camaraderie and physical rigours of the kitchen; in later years, that hardened exterior would give way to a more inquisitive and worldly approach in a career defined by journalistic pursuits: from his first widely read work, an essay published in the The New Yorker titled “Don’t Eat Before Reading This”, which later evolved into the best-selling memoir, Kitchen Confidential: Adventures in the Culinary Underbelly; to becoming a journeyman and commentator on the world’s cuisines on his shows, A Cook’s Tour and Anthony Bourdain: No Reservations. Moving to the CNN network in 2013 for what would become the final iteration of his show, Parts Unknown, his culinary escapades gained heavier significance, becoming more inextricably linked with issues spanning socio-economics, politics, universal food rights and industry equality — all filtered through the lens of an intrepid traveller’s sojourns around the world.

His career has been an unorthodox one straddling two worlds: one where he wrote from knowledge and experience, empathising with the misfits and the outcasts, the unsung culinary heroes of the kitchen from the line cooks to the dishwashers (that backbreaking vocation which would instil in him a lifelong respect for human toil and endeavour); to that of the nomadic outsider humbly leaving prejudices at the door to chase a world of unknowns in pursuit of discovery and enlightenment, human connection, and ultimately, good food.

To those of us with even an inkling of interest in the topic, Bourdain’s literary prose, roguish demeanour, and truthful spirit has been a refreshing outlier in the glossed-over world of food and travel shows, repeatedly side-stepping convention to get to the heart of the matter — whether good or bad, beautiful or grotesque. More often than not, it was the latter, as he once stated, “Good food, good eating, is all about blood and organs, cruelty and decay.” In one particularly memorable episode of Parts Unknown, filmed on the coast of Sicily, he proved his loyalty to authenticity and the viewer, visibly outraged when the crew seem to be throwing dead octopus into the ocean to film him catching it on camera. “Back in the same country almost a decade later, and I’m still desperately staging fishing scenes?” he scoffs.

Never one to mince words, Bourdain’s rollercoaster career hasn’t always been a pageantry of highs: he’s been open about his drug addictions, and more than once made headlines for Twitter wars with other chefs and peers in the industry. But through it all, his voice has made an indelible mark on the world: to aspiring journalists, his honest and distinctive prose will be revered — and no doubt imitated to futile effect — for years to come; to globetrotters, his unwavering sense of adventure urging us all to to travel fearlessly into the far-flung corners of the earth, drinking beers and gobbling organs at the dingiest of street-side stalls in lieu of fancy three-Michelin-starred meals.

He was a pioneer in his field who didn’t so much stand on the shoulders of giants as stoop to the ground, venturing where no one else would and sifting through the dirt to uncover the beating heart of humanity at every turn. He helped us to view the world from an unfiltered lens, break down the barriers and see the good in those different to us. His voice, in a nutshell, was more important than ever in the crazy and chaotic world we’re fighting against today.

In Kitchen Confidential, Bourdain wrote, “Do we really want to travel in hermetically sealed popemobiles through the rural provinces of France, Mexico and the Far East, eating only in Hard Rock Cafes and McDonalds? Or do we want to eat without fear, tearing into the local stew, the humble taqueria’s mystery meat, the sincerely offered gift of a lightly grilled fish head? I know what I want. I want it all. I want to try everything once.”

No one can say he didn’t do just that.

Travel Hong Kong Travel Guide Anthony Bourdain Chef Profile food news travel show
Leslie Yeh
Editor in Chief
Having worked as a lifestyle editor for almost 10 years, Leslie is thrilled to be writing about the topic she loves most: wining and dining. When she's not out pounding the pavement for the latest new restaurant opening or tracking food trends, Leslie can be found at home whipping up a plate of rigatoni vodka and binge-watching Netflix with a glass of Sauvignon Blanc in hand.
Dining Restaurants Food Trends Drinks Travel