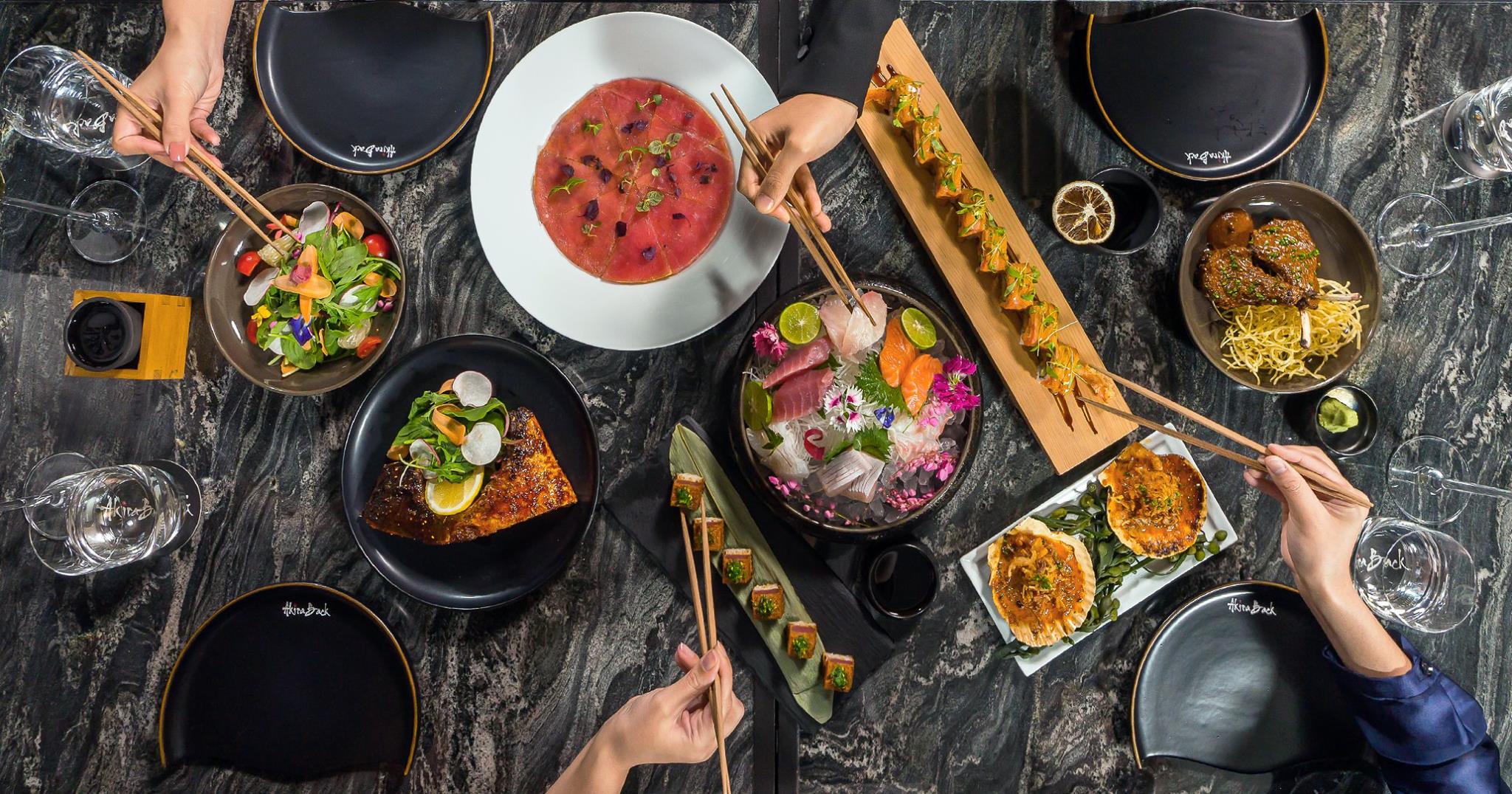 If you haven’t heard of Akira Back, you’re missing out on one of the biggest stars in the Asian gastronomic world. Having built an empire of his eponymous restaurants across Asia in Jakarta, New Dehli and Singapore, the South Korea-born, Colorado-bred chef Akira Back has recently ventured out into the Bangkok culinary scene with Akira Back at Bangkok Marriott Marquis Queen’s Park. Former Executive Chef of Nobu Matsuhisa’s restaurant in Aspen, Colorado and owner of Michelin-starred restaurant DOSA in Seoul, chef Back’s distinctive east-meets-west culinary offerings are best described as authentic Japanese cuisine prepared with a Korean accent.

A little research will tell you that the celebrated chef has developed a global reputation with his popular Yellowtail Japanese Restaurant & Lounge at the Bellagio Resort & Casino in Las Vegas, where Paris Hilton and Fergie are just a few examples of chef Back’s regular diners.

All of this sounded promising, so we decided to check out his latest Akira Back venture in Bangkok (spoiler: it did not disappoint). We kicked off the meal with Yuzu Sour (THB 360), a refreshing cocktail made with three simple ingredients: yuzu, sake and vodka. Sake lovers should try Akira Back’s own branded spirit — a clean, beautiful sake produced by the famous Nanbu Bijin brewery in southern Japan’s Iwate Prefecture. The beverage menu also includes an extensive list of curated wine, craft beers from Japan, Korean, America and some of the world’s most expensive sake.

Much like his Korean-born, American-raised and Japanese-trained influences, the celebrity chef’s clam-to-fame creations span a wide range of culinary origins. Each Akira Back restaurant has a special menu items focusing on dishes made with the freshest local ingredients, but you’ll also find a few signature dishes that are found at all locations for good reason. One of these dishes is Akira Back’s signature Tuna Pizza (THB 430). Admittedly, we were skeptical when we first heard about this course. But after having a slice of it, our doubts were put to rest. In fact, it tasted incredibly delicious and was so light that we could finish all eight slices and still ask for the main course. Served beautifully with thin crispy crust, sliced tuna sashimi with ponzu mayo sauce and topped with micro shiso and aromatic white truffle oil, the tuna pizza greeted the palate with a flood of umami in every bite. Despite the use of pungent seasonings like truffle oil and micro red shiso, each ingredient was essential to the whole and no single flavour was overpowering. Another standout dish was the AB Tacos (THB 340), a Korean-influenced concoction featuring crispy tacos served with juicy minced wagyu galbi and topped with tomato ponzu sauce. This appetiser treats the senses with a brilliant combination of various textures: crispy and tender, yet juicy and dry at the same go, revealing chef Back’s penchant for Korean flavours. Next up is Salmon Tiradito (THB 390), a special dish made with Thai grilled mango and salmon sashimi. Available only at Akira Back’s Bangkok branch, the Peruvian influenced ceviche is completed with the sweetness from charred mango and appetizingly counterbalanced by the fragrant yuzu lemon sauce. The dish was presented beautifully on a tastefully designed plate decorated with chef Back’s mother’s paintings. 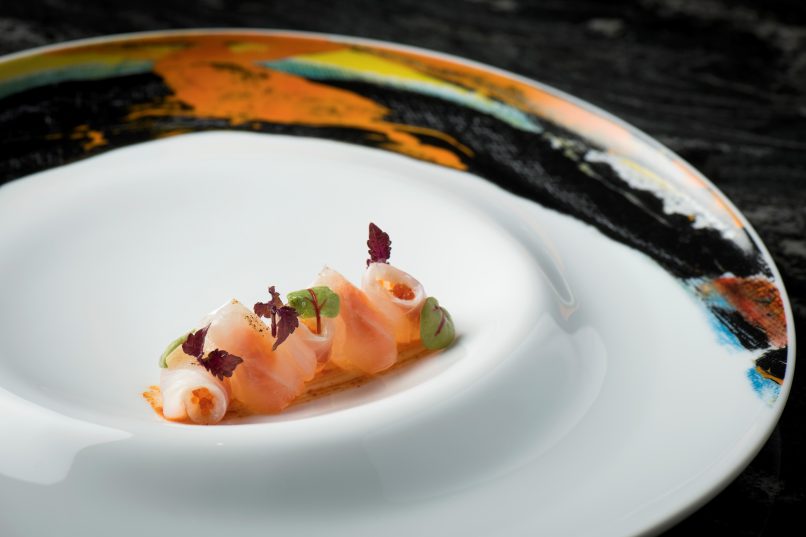 The raw fish journey continued, but this time with a story. As a young boy who didn’t quite fancy sashimi, chef Back’s father would put together fresh snapper with Korean chojang sauce for him — the only way chef Back likes his sashimi. With an inkling of childhood nostalgia, his refined version, the Jeju Domi (THB 380), features the domi (a Korean red snapper) rolled around crunchy orange-infused tobiko and intricately plated on top of the sweet and spicy chili pepper sauce. Make sure you leave some room, as the desserts are worth savouring every last bite. First comes the Valrhona ‘Lava’ Soufflé (THB 370), a fusion between lava cake and a soufflé made with decadent Madagascar Manjari Dark Chocolate, which has notes of red fruits from the terroir of the cocoa plantation. Paired wonderfully with vanilla ice cream (also from Madagascar), sweet tooths won’t be left disappointed with this one. 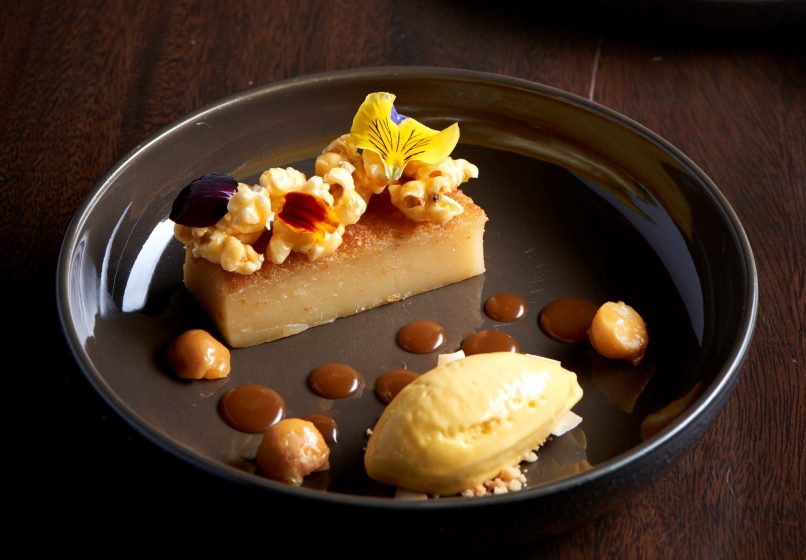 Just as we thought the meal couldn’t get any better, the Coconut Mochi Cake (THB 160) was served to the table. Served with crunchy caramel popcorn and candied macadamia nuts, Akira Back’s refined version of mango sticky rice has us at the silky smooth coconut mango sorbet, which tastes naturally sweet and complements the dense Hawaiian butter mochi cake perfectly. As far as Japanese food is concerned, the Bangkok restaurant scene is already rather saturated. But Akira Back sets itself apart from the pack, by rolling out authentic Japanese cuisine prepared with a Korean accent, derived from seasonal produce and artisanal sourced ingredients. With its unbeatable location on the top floor of Bangkok Marriott Marquis Queen’s Park, together with the swanky ABar & ABar rooftop, Akira Back is an all-in-one destination for tasty, well-executed food and drinks. And honestly, we’d gladly make a return trip for the Tuna Pizza and AB Tacos alone.

Akira Back Bangkok Marriott Marquis Queen’s Park Yellowtail Japanese Restaurant & Lounge Nobu Matsuhisa DOSA in Seoul
Pearl Yan
Sign up for our newsletters to have the latest stories delivered straight to your inbox every week.

Unpacking the real story of curry, one of the world’s most controversial foods

The best restaurants in Tokyo, according to Ichigo Ichie’s chef Akane Eno