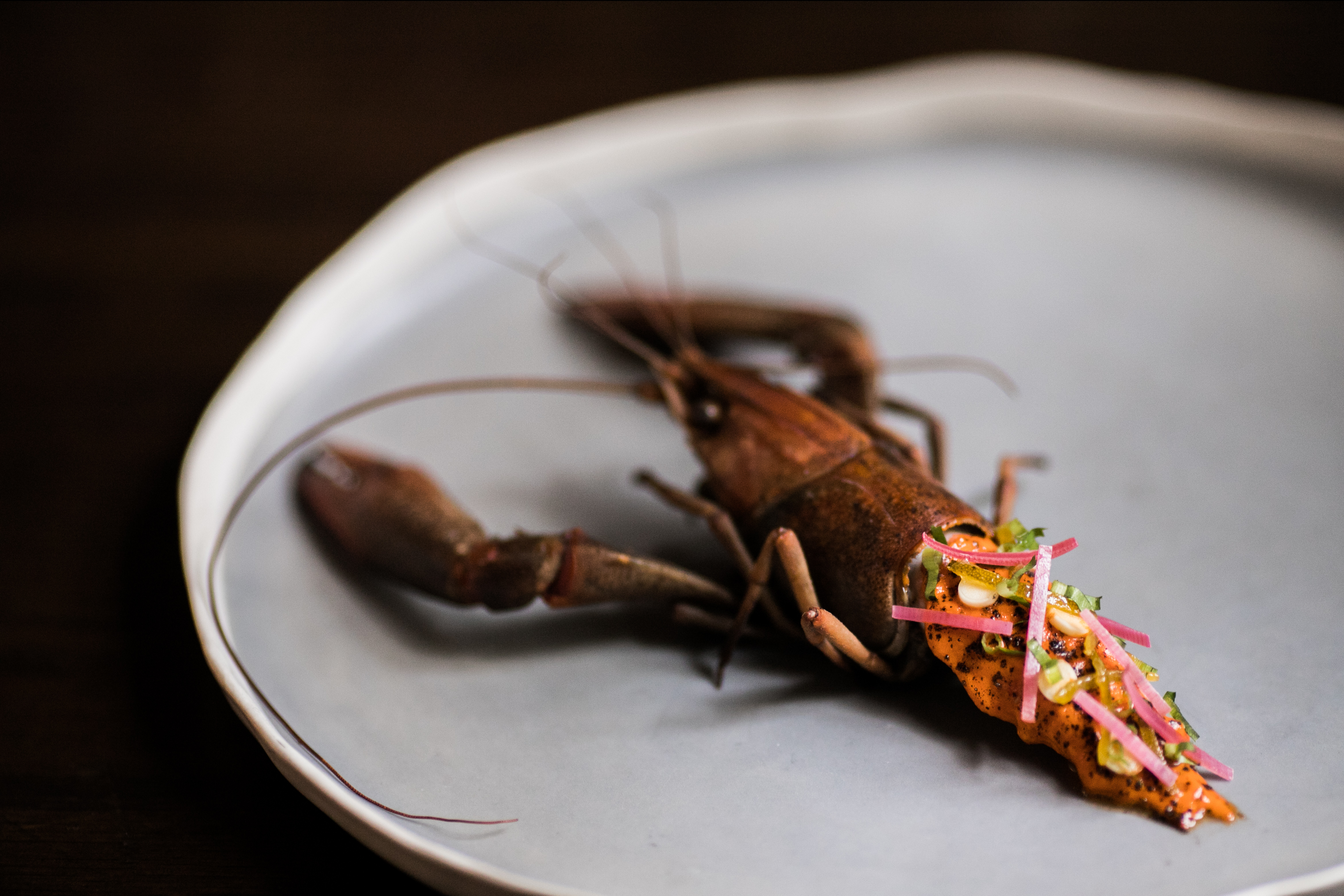 In an agricultural country like Thailand, where local produce is diversified and readily available in various regions, it has become a trend in the Bangkok restaurant industry to focus on locally sourced ingredients to dish up some of the most creative concoctions. While restaurants serving up Thai ingredient-led cuisine are dime a dozen, when you have a visionary chef like Texas native Riley Sanders helming the kitchen and the team behind the swanky Thonglor bar Rabbit Hole  working together to spice up the Bangkok dining scene, you can expect some extraordinary creations. Located only a few steps away from Rabbit Hole, Canvas is a dimly lit, two-story shophouse sophisticatedly decorated in dark wood and black and white tiling. The shimmering copper bar counter facing the open kitchen is arguably the best seats in the restaurant; elegantly decked out with table lamps, it makes the perfect spot to watch Chef Riley and his team painstakingly finesse each and every plating of some of Thonglor’s most inspired dishes. All of this sounded promising, so we decided to stop by Canvas to sample the new 9-course tasting menu. We started off with a delectable plate of amuse-bouches, consisted of three small bites; khao taen (crispy puffed sticky rice from Northern Thailand) with pla tuu (salted Thai mackerel) dressed with turmeric, chili, and lime and topped with dok kajon (cowslip creeper flower), oyster from Surat Thani presented raw with a green mango sorbet, seasoned with fresh green peppercorn, and crispy wild pepper leaves, and our favourite of the three, roasted sunchokes filled with a sunchoke puree, served with fresh green chili and green chili salt. Pleasantly surprised by the level of technique and thought that went into even the small bites, our expectations were set high for the rest of the menu. 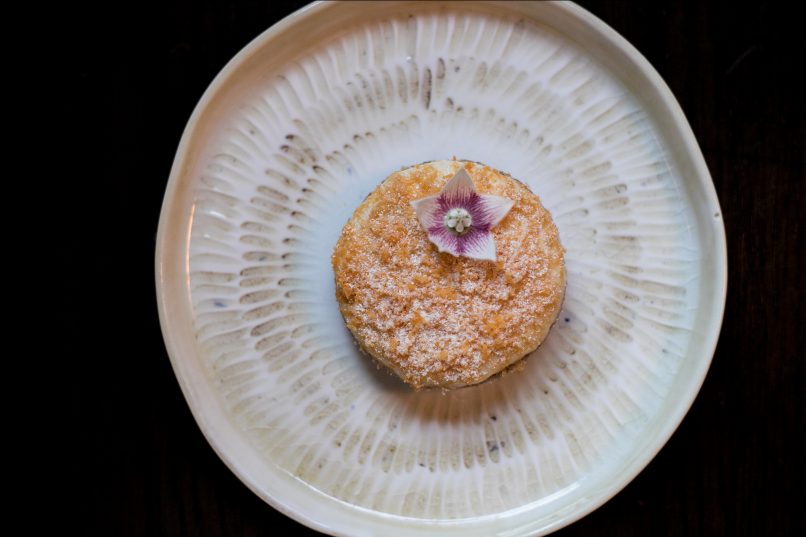 Little did we know our favourite dish of the night would come next in the form of a toasted rice bread that was served as an appetiser. Using organic red rice from Nan province toasted with pandan leaves and sticky rice powder as the base, the bread was baked and slowly grilled, then layered with an emulsion of brown butter cooked with jasmine rice, honey, and yellow chili. Finished off with cured, salted egg yolk to give a cheesy taste, and a thin layer of khao kuah (toasted sticky rice powder) to add extra texture and aroma. Salty and moreish, this palm-sized bread was so addictive that we couldn’t help but wish they were available in takeaway boxes. Another standout was the crayfish, which was sourced from Buriram Province. Poached and coated in a puree of grilled red chilies seasoned with garlic, lime juice and coconut water, the crayfish was presented in vibrant colours with pickled dala flower, preserved somjeed, lemongrass heart and culantro. We loved the refreshing flavour that came from the lime ash, which was cooked for two days in coconut husk charcoal. While Canvas’ new offerings are available in six and nine courses, a few outstanding dishes that we think are too good to miss are only available in the 9-course tasting menu. For instance the grouper; poached in mah kwan pepper oil, a wild pepper commonly found in Mae Hong Son province, the fish was topped with toasted wild almonds from Isaan and seasoned with lime juice — a combination that we never thought would work so well. It was then garnished with Szechuan leaf, a relative of mah kwan pepper, and served with a sauce made from wild almond milk and mah kwan pepper oil. For an indulgent treat, opt for the 6g of Royal Projects caviar to supplement the grouper for an extra THB 500. For meat lovers, load up on Canvas’ luxed up version of Thai wagyu tenderloin. Inspired by Shabu preparations, the succulent wagyu tenderloin from Buriram was served thinly sliced and raw, and paired with various types of mushrooms such as shiitake, oyster, monkey head, enoki, covered in a homemade jus made from oxtail, seasoned with dried mushrooms, dried chili, Thai bay leaf, lemongrass and peppercorn. While well-seasoned and unabashedly sharp, this dish seemed rather safe and unexciting compared to our earlier courses. 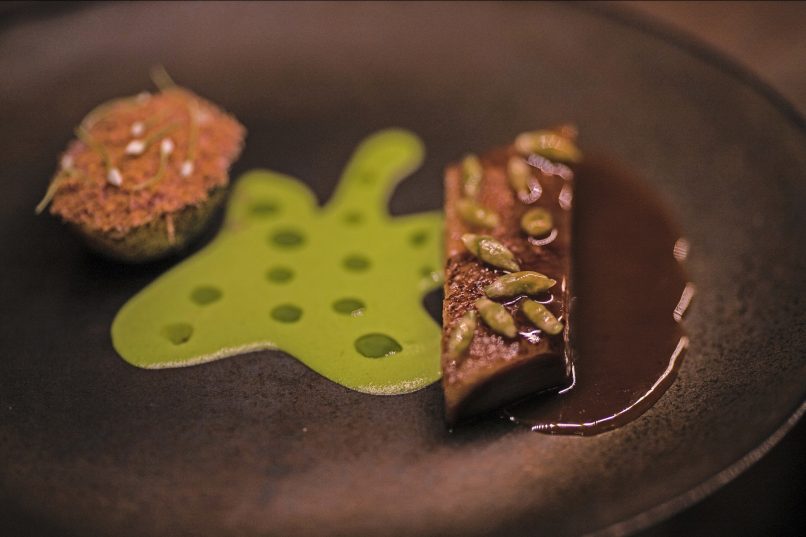 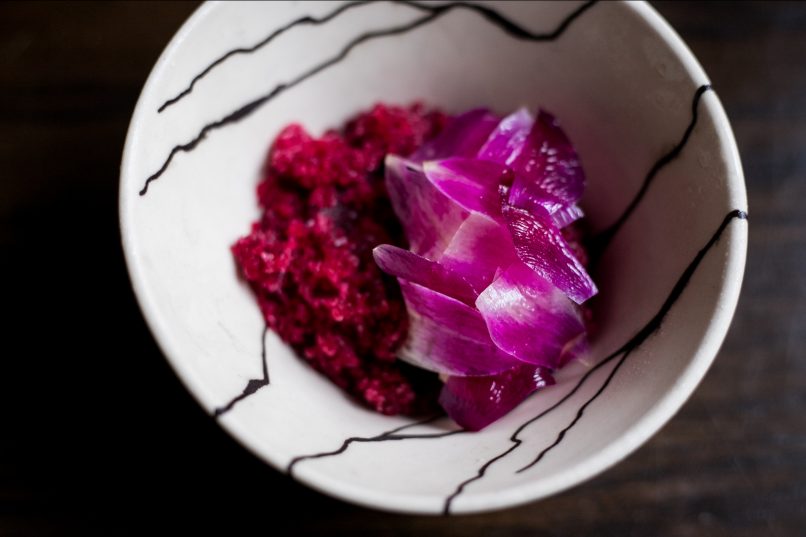 Following the satisfying main courses were some unconventional desserts, which we found equally impressive. Prior to having the much-anticipated jackfruit dessert, we were served lychee, a palate cleanser made from a roselle shaved ice seasoned with palm sugar and topped with a coconut cream made with pandan and palm sugar. Alongside the fresh lychee and coconut cream, the star of the dish, in our opinion, was the edible orchid flowers candled in palm sugar syrup. Refreshing and well-balanced, chef Riley’s clever use of lychee, orchid and roselle undoubtedly changed our impression of palate cleansers, which are often dull and tasteless. 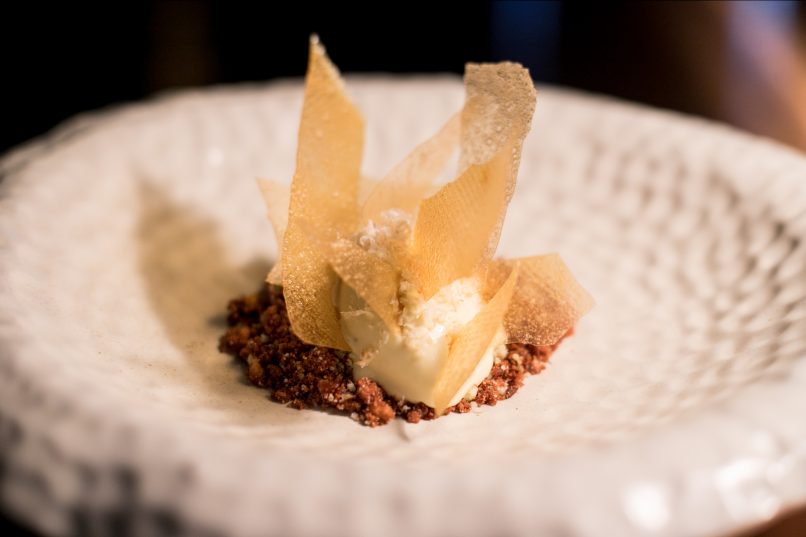 The jackfruit dessert may not appeal to the less adventurous, but we considered it the highlight of Canvas’ new tasting menu. Essentially jackfruit reinterpreted in nine different ways, chef Riley presented the fruit in new dimensions by preparing it in the forms of ice cream, fried seeds, crisps, puree glasses, crumbs and puree. While it may sound like a whole lot of jackfruit flavours in one plate, it was perfectly balanced with a crumble of toasted milk powder and kaffir lime. While we thoroughly enjoyed the dessert, we imagined it to be a very daring move for Canvas to include it in the new tasting menu, given that the taste of the exotic fruit is still unfamiliar to many. However, rumour has it that even diners who refused to eat jackfruit fell in love with it after having a taste, so this one is definitely worth giving a try.

If you’re looking for a restaurant that will add a wow factor to your dining experience, Canvas is the next big fine-dining player in the Bangkok restaurant scene that you wouldn’t want to miss. It stands out from the pack with its devotion to local ingredients and flavours without shying away from redefining their potentials in unconventional ways. Canvas’ innovative and fearless approach in putting together unexpected flavour combinations in the new tasting menu is a remarkable endeavour that helps define Thai produce dining in Bangkok today, and we’d gladly make a return trip for it.