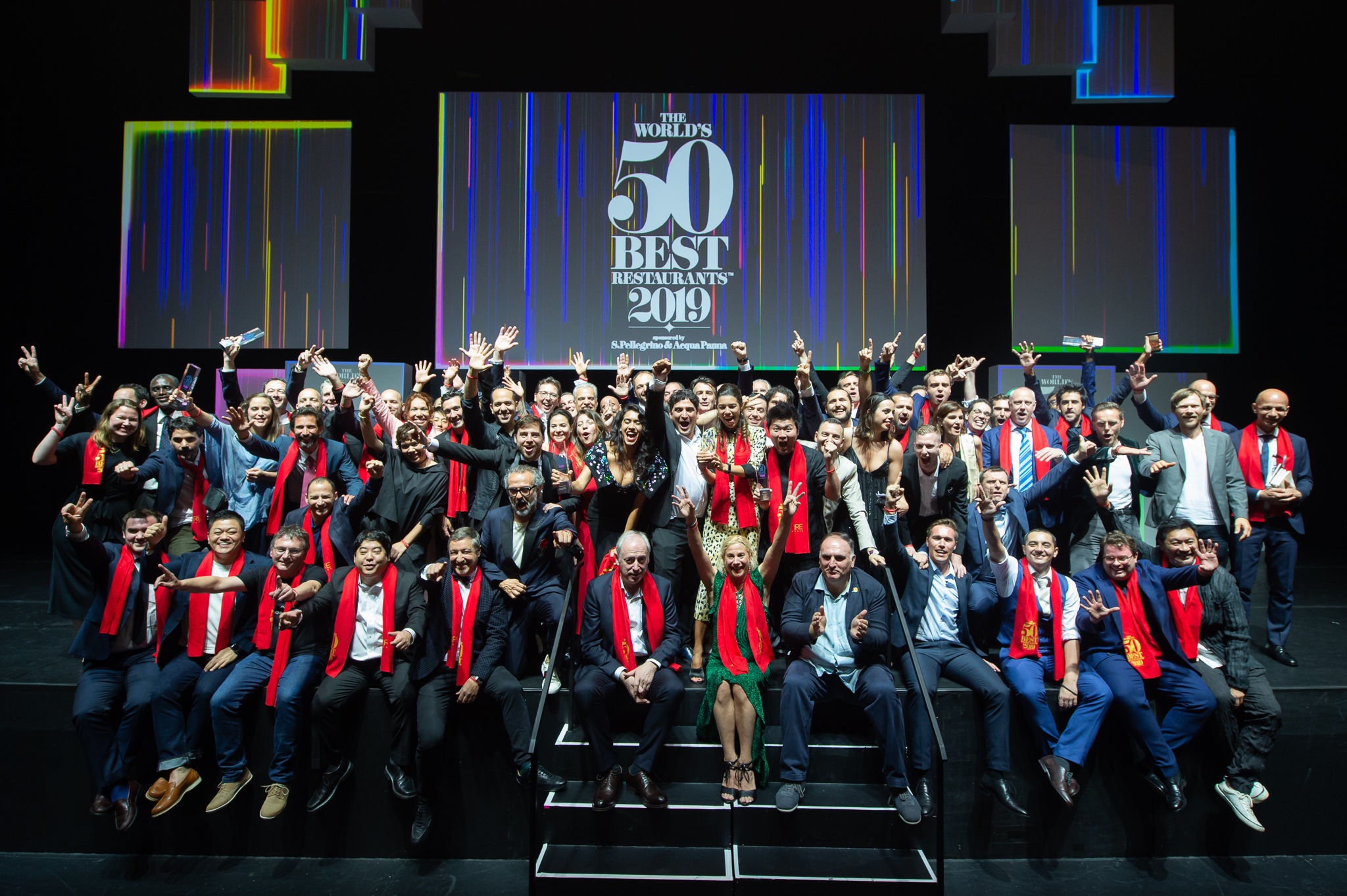 The highly coveted World’s 50 Best Restaurants list was announced and celebrated at the Marina Bay Sands in Singapore last night, and suffice to say, Bangkokians can still call their city the home of the best restaurant in all of Asia, and amongst the Top 5 in the world.

But we kind of already suspected that.

What’s interesting about this year’s unveiling of the list is the newly announced judging system, as well as a few surprising jumps and new entries. With a freshly underpinned focus on gender equality and a spotlight on newer restaurants, read ahead for our run-down of the night, toast to our Bangkok beloved winners, and get thinking about dinner.

The biggest winner of the night was Mauro Colagreco’s Mirazur, crowned the Best Restaurant in Europe, and the Best Restaurant in the World for 2019. A well-deserved yet slightly unsurprising win, the restaurant that hails from the French town of Menton claimed the No.3 spot in 2018 and the No.4 spot in 2017, boasting a steady yet impressive climb. The restaurant’s accolade pays true tribute to Chef Colagreco’s love for local produce and for sustainable practices, with a three-tiered garden just metres from the dining room, and a stunning French Riviera backdrop.

Mirazur follows on from the iconic Osteria Francescana, which held the title of the Best Restaurant in the World in 2018, and which has now moved to the newly minted Best of the Best Hall of Fame.

In total, the 2019 list included restaurants from 26 countries worldwide, with 12 restaurants making their debut and three returning as re-entries.

Shockingly but also not-so-shockingly, Noma in Copenhagen was announced as the Highest New Entry, debuting on the list at an extremely high second place. Dubbed the ‘new Noma’, the Nordic restaurant is somewhat a reincarnation of the original restaurant of the same name, yet under a slightly different concept and in a new location. Its ranking is an interesting one in the light of the slight change of rules in the World’s 50 Best voting system. But more on this later.

There’s no denying that over the years there has been great speculation amongst foodies and industry insiders about the voting and ranking process at The World’s 50 Best Restaurants. Granted, it’s a daunting task, what with an incredibly formidable avalanche of new (and old) restaurants worldwide to assess.

As a general rule, the list is composed of votes by over 1000 international restaurant and industry experts and gourmets, known as The World’s 50 Best Restaurants Academy. Nevertheless, it is difficult, given the high number of top-quality restaurants around the world, to give enough and fair acknowledgement to all. That’s why this year, a new element has been introduced to the awards.

The Best of the Best Hall of Fame refers to the elite group of restaurants that have been ranked at the No.1 spot in previous years, and have far proven their worth by investing in the future and growth of the industry through various initiatives. And whilst this is all great and shining, it gets interesting here: those who are in the Best of the Best group are not eligible for voting in 2019 or even beyond. This means that newer restaurants and entries are given a greater chance at claiming the top prize, all the while still honouring the noteworthy. Here’s the Best of the Best list as of 2019, and the year(s) in which they won the title of the World’s Best Restaurant:

Though there was rightfully little doubt over which establishment (or which local icon) would reign supreme on the list for Thailand or even Asia, Gaggan has done us proud again. Climbing up one spot from last year, the progressive Indian restaurant on Soi Langsuan claims the No.4 spot on the list this year, putting Bangkok and Thailand into the Top 5 for the World’s 50 Best Restaurants 2019, shimmering as the very best restaurant in all of Asia. It’s an interesting development, considering that Gaggan actually dropped on the list for Asia’s 50 Best Restaurants 2019 (after a four-year reign as the No.1 restaurant, nevertheless). On the world ranking, this puts Gaggan higher than the current Asia’s 50 Best Restaurants 2019 winner, Odette (which came in at No.18 on the World’s 50 Best list).

Most warmly, Gaggan is in fine company this year too. As a bright new entry, the 2019 list sees our favourite chef twins Thomas and Matthias Sühring of the eponymous Restaurant Sühring in Yen Akart fly onto the list at No.45. Showcasing modern German fare inspired by nostalgic childhood memories, it’s an exciting addition to the list.

Without further ado, find the full list for the World’s 50 Best Restaurants 2019 below. Restaurants in Asia are highlighted in bold face. Congratulations to all winners.

Dining fine dining Nahm Gaggan World's 50 Best Restaurants Suhring world's 50 best gaa world's 50 best restaurants 2019 mirazur
Lisa Gries
Creative Content Director, Bangkok
Lisa loves to travel, and is always on the lookout for the world’s best nap spots. She’s a serious Asian art history nerd, and has a knack for languages and coffee table books. She hopes to publish her own novels one day, one of which will likely be called ‘All The Great Conversations I Had In A Bangkok Speakeasy.’ It’s a work in progress.
Travel Drinks Dining Watches
Sign up for our newsletters to have the latest stories delivered straight to your inbox every week.