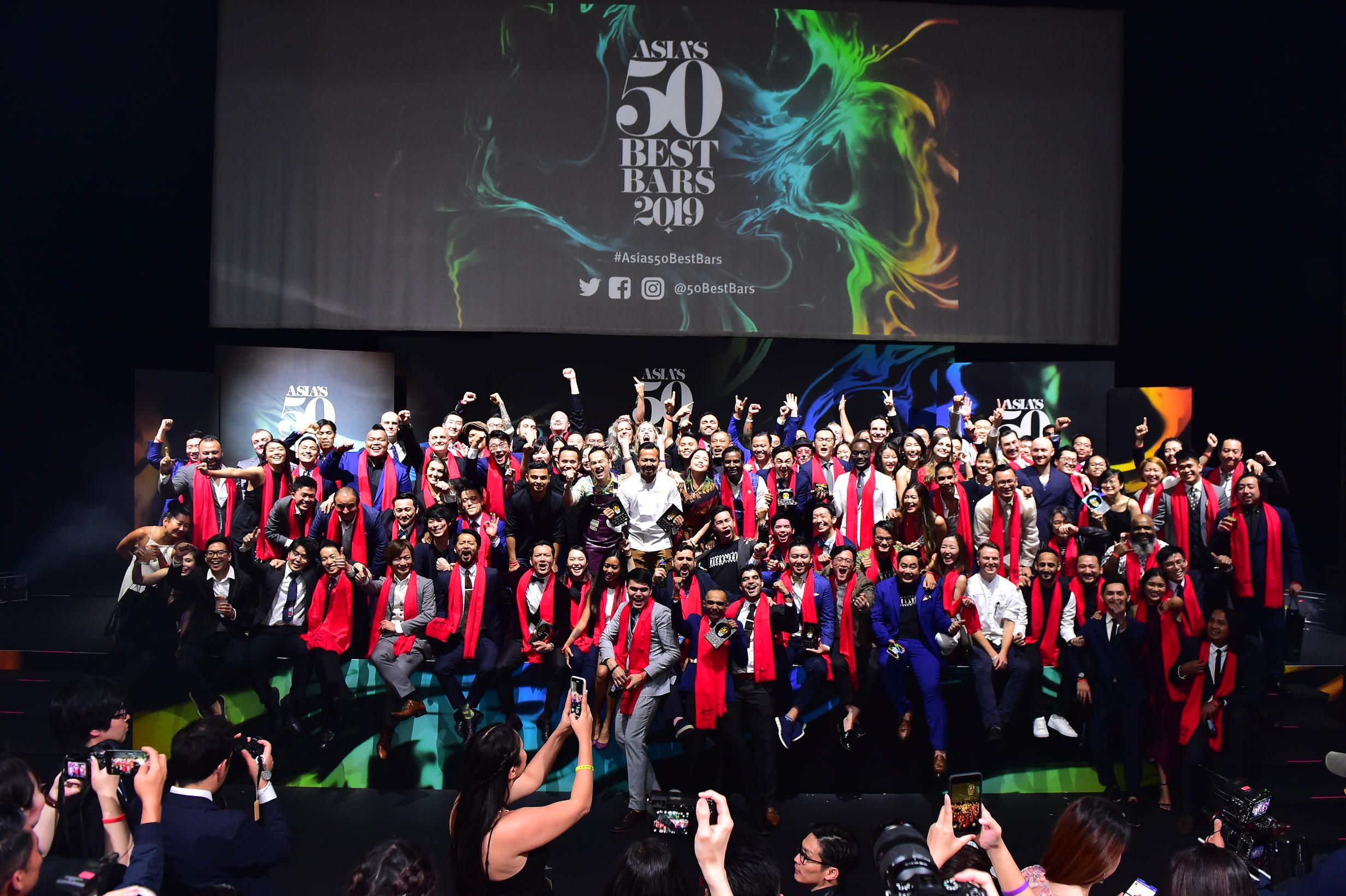 The hot highlight in the calendar of any cocktail connoisseur, the Asia’s 50 Best Bars 2019 awards ceremony took place in Singapore last night, with many a proud win for Bangkok city.

Whilst the number one spot goes to the amazing The Old Man in Hong Kong (dethroning twice-reigning Singaporean champion Manhattan, no less), it has been perhaps the most exciting year for Bangkok, with a total of seven entries on the renowned list. This puts Thailand in third place after Singapore (with 11 entries) and China (with 12 entries), giving the country’s beloved bars their much-deserved acclaim within the region.

Held at the Capitol theatre, the fourth edition of the annual ranking saw a number of interesting rise and falls. Bagging the number one spot, Hong Kong’s The Old Man opened only recently in 2017, but has since made a serious wave across the bar industry. Paying tribute to Ernest Hemingway’s 1952 novel of the same name, the bar concept is helmed by Agung Prabowo, James Tamang, and Roman Ghale, and first entered the list last year (!) shooting straight to the No.5 spot in 2018. The bar serves an experimental cocktail list, inspired by the writer’s favourite ingredients and combinations; a testament to the team’s flair for finesse, and original creativity.

The Old Man’s win is preceded by the reign of Singapore’s Manhattan, which topped the list in both 2018 and 2017, and still claims the title of The Best Bar in Singapore. The Top Three is completed by Indulge Experimental Bistro in Taipei, also The Best Bar in Taiwan. Bringing together the Top 5, Lion City continues to honour its rep as a truly remarkable city for bars, with Native at No.4 (rising four spots from last year), and the ever-popular Atlas at No.5.

The Highest Climber Award went to Singapore’s Jigger & Pony, climbing an incredible 33 spots from last year to No.9 on the list, whilst Hong Kong’s Coa debuts at No.12 as the highest new entry. 12 new entries were spotted on the list in total, two of which came from Thailand.

Bringing it home for Bangkok

Thailand’s highest entry comes as no real surprise but to undeniably rightful recognition, with The Bamboo Bar at the Mandarin Oriental positioned within the Top Ten at the No.8 spot. The iconic hotel bar rose one place from No.9 last year, and was previously also featured as the only Thai bar to proudly make it onto the World’s Best Bars list last year.

The sprinkling of Thai bars across the list spurs with local favourites throughout, with Backstage Cocktail Bar at No.20, Vesper (rising one place) at No.26, Tropic City (a refreshing new entry) at No.31, Rabbit Hole (also a highly anticipated new entry) at No.34, as well as Smalls at No.42, and Teens of Thailand at No.48.

Noteworthy for Thailand is the spotlight on many small and independent venues. Bar the exception of The Bamboo Bar, all bars on the list are stand-alone watering holes, including some long-time local favourites like Suanplu’s Smalls and Soi Convent’s Vesper. It’s charming to see that the panel of judges for Asia’s 50 Best too has noted the allure of Bangkok’s rising Chinatown bar scene, with awards given to both Tropic City and cool-cat epicentre Teens of Thailand.

Beyond the annual ranking, the awards ceremony also honours a few stand-out bars and personas every year.

2018’s winner, Manhattan, was named Legend of the List, celebrating its consistent excellence over the history of the awards. Japanese cocktail master Shingo Gokan won the Altos Bartenders’ Bartender 2019, voted as the winner by his regional peers.

Pussyfoot Saloon in Seoul bagged the title of the Campari One to Watch Award, whilst Kuala Lumpur’s Bar Trigona took home the Ketel One Sustainable Bar Award.

A tribute to the skill, the artistry, and the blissful drinkability for some of the region’s most distinguished bars, scroll ahead to see the full list of winners. New entries are marked with an asterisk; Thai entries are marked in bold face. Congratulations, and cheers to all.

Drinks Bangkok Rabbit Hole Vesper Mandarin Oriental Bangkok Teens of Thailand Asia's 50 Best Backstage Cocktail Bar Bangkok bars Tropic City The Bamboo Bar asia's 50 best bars 2019 Smalls Bangkok
Lisa Gries
Creative Content Director, Bangkok
Lisa loves to travel, and is always on the lookout for the world’s best nap spots. She’s a serious Asian art history nerd, and has a knack for languages and coffee table books. She hopes to publish her own novels one day, one of which will likely be called ‘All The Great Conversations I Had In A Bangkok Speakeasy.’ It’s a work in progress.
Travel Drinks Dining Watches
Sign up for our newsletters to have the latest stories delivered straight to your inbox every week.