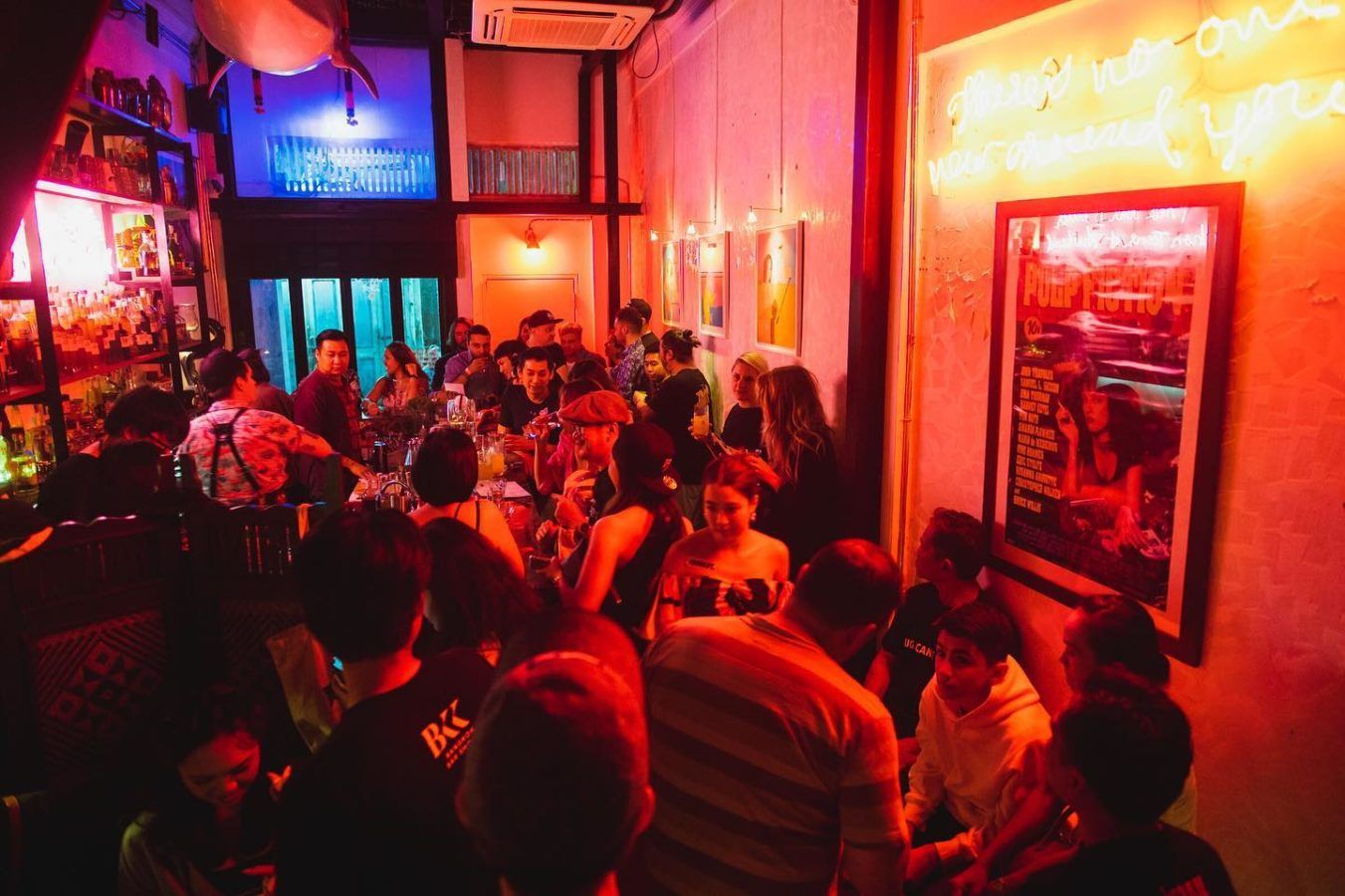 Bangkok is going big on the boozy next week as the city is about to witness the most exciting bar-hopping experience it has seen in a very, very long time. Here’s the low-down on the 55+ bar and drinks events to bookmark between 25-30 April.

In the run-up to the Asia’s 50 Best Bars event and in the aftermath of the highly-anticipated awards ceremony, various bars across town are hosting special one-night-only events. As Thailand has eased its entry restrictions and will be hosting the Asia’s 50 Best ceremony in the capital city, the industry is bursting at the seams with guest shifts, masterclasses, and downright takeovers by some of the region’s greats.

The most exciting week in the year for the bar and drinks industry in Thailand, catch up with old friends, meet up with new friends, and do it all over some of the best tipples in town. Perhaps you’ve visited some of these bars during your travels in the region, or perhaps you’re just looking to switch things up for the night. Whichever way you choose to kick it, there will be a cocktail to suit. Find our list of the very many drinks events below, and maybe prep a detox for the next few days, because your body will definitely need it the week after.

N.B. Changes and updates in the lineup are likely to occur, so watch this space for further updates.

Igniting the influx of events and incoming bartenders, things start off pretty chill on Monday 25 April with guest shifts both in China Town and in Thonglor.

John Nugent from The Diplomat, Hong Kong, will be at Find The Locker Room, whilst Santanu Chanda will be serving up Hapusa Himalayan Dry Gin cocktails at the newly-opened Independence bar across town. The latter is run by the same team as Teens of Thailand, Tax, and Asia Today, and will be hosting its first guest shift ever with this event.

Tuesday is a heavy day for drinkers, and options span from Charoenkrung and Sathorn over to the Sukhumvit side. We suggest you pick a neighbourhood and take it from there, or do a city-wide bar-hop, if you dare.

The team from India’s best bar, SideCar, will be taking over the Bamboo Bar at the Mandarin Oriental, whilst Singapore’s infamous Atlas, Jigger & Pony, and Nutmeg & Clove will be behind the bar at the newly-opened Mahaniyom Bar. Over at Tropic City, there will be a Potato Head Beach Club takeover, featuring Hary Wahudi from Bali, Drè Masso from London, Holly Graham from Hong Kong, Bina Nuraga from Bali, and Tom Egerton from Hong Kong.

Over in China Town, guest shifts are not only split by bars but also by timing, so plan smart. From 7-9pm, Teens of Thailand will be hosting Adrian Besa from the MO Bar Singapore, as well as Jay Gray of Sago House from 9pm-12am. Asia Today will see Martin Villareal of the Republic Bar Singapore at the bar, as well as Ng Wen Xuan and Joy Chee of Native and Analogue. Independence will host Daniel Elphinstone together with Dewar’s, and Tax will be having ex-Bangkok beloved Davide Boncimino of Sugarhall behind the bar. The newly-opened Opium bar will see Eric Sabloniere of Bluebird Paris.

Vesper is hosting Maybe Sammy, one of the world’s 50 best bars, at its Convent Road location. It will be a joint event together with Maybe Sammy’s sister bar Dean & Nancy on 22 from Australia, and sees the two joining hands through a menu by Paolo Maffietti and Stefano Filardi.

The recently re-opened Lennon’s at the Rosewood Bangkok will have a guest shift by Kelvin Saquilayan of the Manhattan Bar Singapore, whilst everyone’s favourite Cuban-inspired bar Havana Social is hosting Smoke & Mirrors at its venue. Firefly Bar will welcome Sandeep Kumar of Hong Kong’s The Wise King. Over at Rabbit Hole, expect a night of fun drinks prepared by Kuala Lumpur’s Backdoor Bodega, or a night of Alice in Wonderland-themed concoctions by Korea’s Alice bar at ABar Rooftop. The Loft at the Waldorf Astoria Bangkok will also be hosting Galaxy Bar’s Krystian Hordejuk, Stefano Gambardella, and Coralie Doillet.

Get over the mid-week slump with some great sips at a select number of guest shifts and drinks events in both the Sathorn and Sukhumvit areas.

At Suan Phlu’s Smalls, check out Anan Saigon’s Phojito + Pho pop-up for a unique and delicious experience, featuring one of Asia’s best restaurants. At Opium, Le Chamber from Korea will be taking over, whilst Tropic City welcomes another Korean bar with Southside Parlour from Seoul.

Across town, Smoke & Mirrors’ Eduardo Zamora will be at Ms.Jigger within the Kimpton Maa-Lai Bangkok. Just a stone’s throw away at Firefly Bar, you can also sip cocktails by The Wise King Bar, Hong Kong. There will be a guest shift by Simone Rossi of Darkside at Lennon’s at the Rosewood Bangkok, while Havana Social will welcome Daniel Elphinstone.

28 April is relatively quiet as the Asia’s 50 Best Bars award ceremony will be taking place at the Mandarin Oriental, Bangkok. We have a feeling there will be a series of official and unofficial afterparties you’ll have to find out about on the day.

There is one guest shift at Sampan, as Sanith from The Palm Jumeirah will be behind the bar here alongside a yet-to-be-revealed guest bartender.

Getting closer to the weekend, the events are really starting to pile on. There is hardly an excuse not to go out, no matter which neighbourhood you’re heading to. One of these venues is even hosting a brunch, if daytime drinking is more your thing.

Tropic City will see Bar Tresouro’s Arijit and Pankaj at the bar, whilst Mahaniyom is welcoming a guest shift from Korean bar Zest.

The recently re-opened bar at The House on Sathorn is welcoming Son Soko from Soko Bar, whilst Vesper is hosting Camparino Bar with Tommasco Cecca and Saverio Casella. Sampan is hosting Hong Kong’s The Wise King.

Ms. Jigger will be welcoming Leon Tan from Laut Bar, whilst Firefly Bar will see a guest shift starring Hwi, Baek, and Park from Bar Charm in Seoul. Over at The Loft at the Waldorf Astoria, there will be a guest shift by Giacomo Giannotti from Paradiso. Day-drinking can be done at Siri House, which is hosting a 12-4pm ‘Bartenders Recovery Brunch’ with Remy Martin, Naked Malt, and Campari.

28 Hong Kong Street takes over at Lennon’s with Elliot Pascoe and Nalini Balasundaram behind the bar, whilst Escape at Emquartier will welcome Southside Parlour. At Find The Locker Room, it’s a truly Singaporean takeover, with Shelly from Nutmeg & Clove, Martin from Republic Bar, and Adrian from the MO Bar Singapore. At Havana Social, Sago House takes the wheel, and at Bar Scofflaws you can find Hayden of Above Board and Mario of the St. Regis Hong Kong at the bar.

It may be the last day of the drink fest, but that doesn’t mean the industry will be letting go easy. From masterclasses to final guest shifts, here’s what to look out for.

For its last guest shift of the week, Vesper will be hosting Makiko Otsu from Japan’s Bar Sebek, the winner of the Suntory Cocktail Award 2021. Meanwhile, Smalls will be celebrating its 8th anniversary with a party.

Over in Charoenkrung, Tropic City is hosting a two-part party with Sago House x Low Tide, as well as Grime Night with Keith Motsi and Holly Graham.

The Okura Prestige too is hosting a series of events on 30 April. From 2-4pm, guests can take part in a masterclass by Tommaso Cecca from Camparino in Galleria. From 4pm onwards, Symphony Loo and guest bartenders will host a Camparino cocktail tasting, and from 5pm until late, guests can enjoy the Aperol Sunset Lounge. At Firefly Bar, Albert Yacob from Bar A/A Jakart will be behind the bar, and at Bar 335, Singapore’s Stay Gold Flamingo will be taking over.

Our liver hurts just going through the run-through, but we know it will be worth it. See you at the bars.

Drinks Asia's 50 best bars where to drink
You might also like ...
Food & Drink
Where to drink in Bangkok this April 2022
Food & Drink
Asia’s 50 Best Restaurants 2022: 9 Bangkok restaurants make the list
Food & Drink
2 Bangkok bars make it onto the World’s 50 Best Bars 51-100 list 2021
Food & Drink
Asia’s 50 Best Bars 2021: 5 Bangkok bars win big for Thailand
Lisa Gries
Creative Content Director, Bangkok
Lisa loves to travel, and is always on the lookout for the world’s best nap spots. She’s a serious Asian art history nerd, and has a knack for languages and coffee table books. She hopes to publish her own novels one day, one of which will likely be called ‘All The Great Conversations I Had In A Bangkok Speakeasy.’ It’s a work in progress.
Travel Drinks Dining Watches
Sign up for our newsletters to have the latest stories delivered straight to your inbox every week.