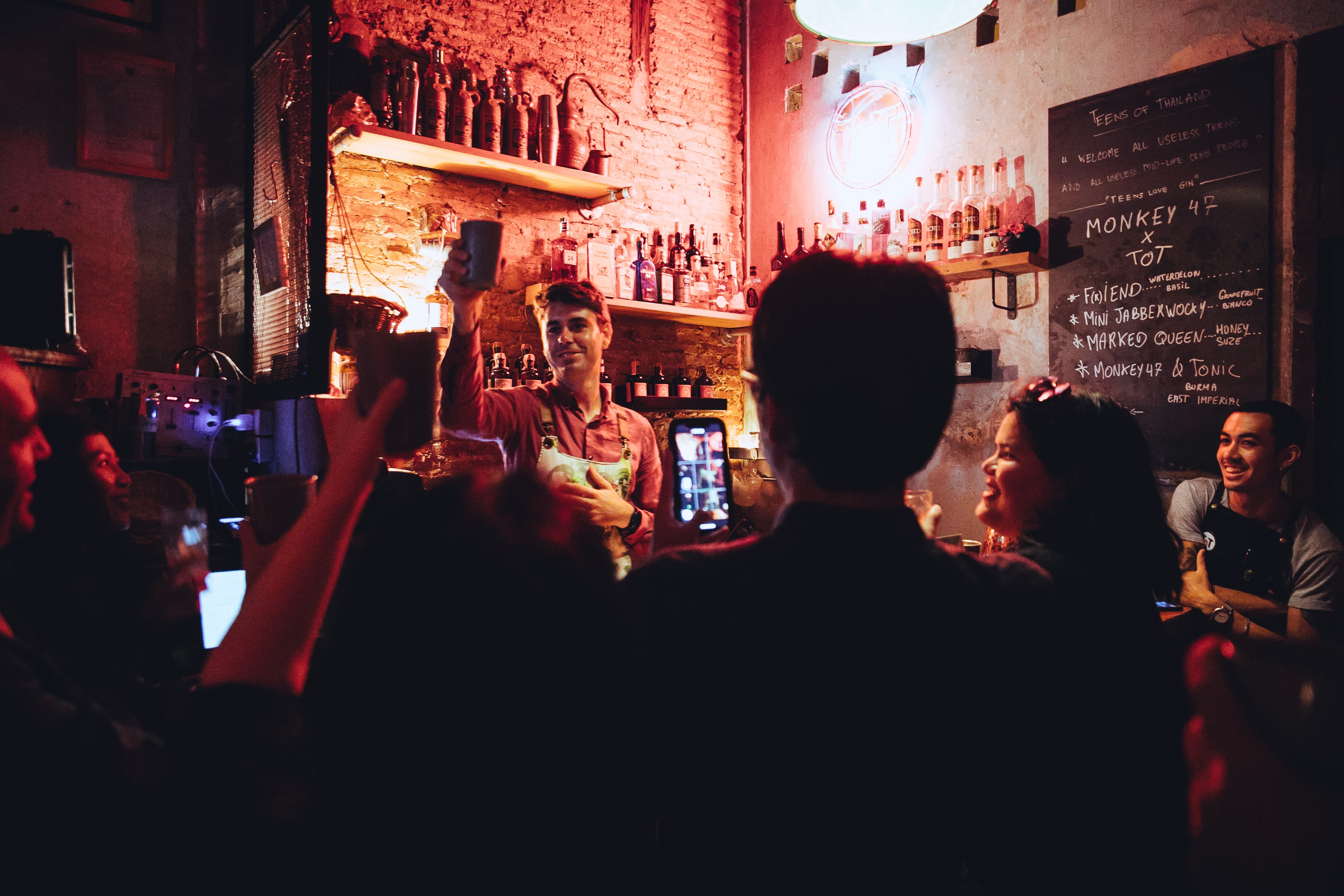 It feels almost as if there is no time hotter than the present to be a gin lover in Bangkok.

From the ever-growing number of gin bars and gin cocktails, to the roaring success of the now-annual Bangkok Gin Fest, the city is finally waking up the beautifully botanical taste of gin — and falling madly and deeply for it.

Yet this season in particular is an exciting one in the world of gin; especially if you like German gin. Earlier this month, we headed to Teens of Thailand — the mellow mothership and perhaps the true origin of the recent craze in Bangkok — to celebrate the launch of Monkey 47 Schwarzwald Dry Gin. In grand company between the regular cool cats at the bar, and a guest shift by brand ambassador Zachary Connor de Git, the event saw a specially-curated drinks menu, beautifully exemplifying why the fresh, fruity, and herbal tipple is globally so adored.

Whether you’ve forever been a fangirl or whether you’re only just beginning your gin journey, consider this a bit of a crash course in all things Monkey 47, and why it’s return to Bangkok (after a long longing) is indeed very exciting. Here are all the reasons why we’re crushing hard, and why you too may soon catch feels.

[All images courtesy of Pernod Ricard/Monkey 47]

What’s in a name? Are there monkeys in Germany?

Prior to the first sip, the most curious thing about Monkey 47 is inarguably its name and bottle design.

As the story goes, Wing Commander Montgomery ‘Monty’ Collins of the Royal Air Force was posted to the British sector of the then-divided Berlin. An animal lover, he became devoted to the rebuilding of the Berlin Zoo, after which he became sponsor to a monkey named Max. A short while later, he opened a country guesthouse, which he named ‘Zum Wilden Affen’ (or ‘The Wild Monkey’, for those not fluent in German). We believe Max must have been the muse.

Ever the British man, Monty wasn’t going to give up long-standing British traditions at his newly-minted pub. He set out to curate the most English of drinks — gin — using the local variety of herbs and plants. Thus was born the unique German recipe for Monkey 47 gin.

There are many stories as to why the German gin bears the number 47. As myth and tale would have it, Monkey 47 gets its name from a dream Monty had one night, wherein he developed his famous recipe based on 47 hand-picked ingredients.

In another not-so-coincidence, and a more logical association, the Schwarzwald Dry Gin also contains 47% alcohol per volume.

More than cherries and cream: what botanicals can you find in the Black Forest?

Food & Drink
How to best pair tonic water with gin, according to East Imperial ambassador Jamie He

Curiously, juniper is a vital ingredient in producing the ham, and in yet another not-so-coincidence, it is a key component of good gin. Beyond this, the true piece de resistance in Monkey 47 is the use of local lingonberries, typical of the Black Forest. These have an unrivalled complexity which really comes through after the distillation process and maturing in earthenware containers. One ingredient that you’ll be more familiar with is also cranberry, adding to the gin a refreshing acidity, lasting bitter notes, and a slight sweetness. They do grow in the Black Forest, but these days we hear Monkey 47 actually sources the ripened berries from Tuscany and Croatia, because it’s a lot warmer (and thereby more aromatic for flavour) over there. Maybe don’t tell Die WELT.

In short: by hand.

Hand-picked ingredients are a vital part of the process for Monkey 47, seeing as elements like the peel of bitter oranges, lemons, and pomelos, have to be fresh off the fruit for the maceration process. Following maceration, the gin also goes through distillation, percolation, and oxidation.

Say again for those who are not experts? The Black Forest Distillers extract the essence of fresh plants, they boil them, and then they gather the resulting alcoholic vapours through condensation before allowing the product to mature. Boom: gin is born.

And lastly, I want to show off to my friends: what is the Monkey 47 Schwarzwald Sloe Gin all about?

Maybe you’re already a connoisseur of sorts, and were already bouncing around in excitement when rumours through the grape vine announced the arrival of Monkey 47 in Bangkok. Maybe you’re an absolute newbie and still can’t wrap your head around the monkey story. Whichever you fall in to: here’s another one you should know about, and another one that is sure to impress beyond the mainstream.

Food & Drink
Where to drink in Bangkok this November 2019

Monkey 47 Schwarzwald Sloe Gin is made with Blackthorn (which is known as ‘sloe’ by its buddies). Sloe berries are harvested after the first frost to make sloe gin, before being macerated in Monkey 47 Schwarzwald Dry Gin for a very long time. Passing through various cycles of maceration and filtration, water is added to the gin to bring the alcohol content down to a calm 29%. It is only distilled in small batches, and offers an entirely different sipping experience, as an alternative or as a complement to your regular Monkey 47 G&T. Certainly not your average — but when was Monkey 47 ever average? From Monty to monkey: the answer is never.

Happy to have you back.

Drinks Pernod Ricard Gin Teens of Thailand Monkey 47 bangkok events
Lisa Gries
Managing Editor, Bangkok
Lisa loves to travel, and is always on the lookout for the world’s best nap spots. She’s a serious Asian art history nerd, and has a knack for languages and coffee table books. She hopes to publish her own novels one day, one of which will likely be called ‘All The Great Conversations I Had In A Bangkok Speakeasy.’ It’s a work in progress.
Travel Drinks Watches Jewellery