Home > Food & Drink > Drinks > Where to drink in Bangkok this December 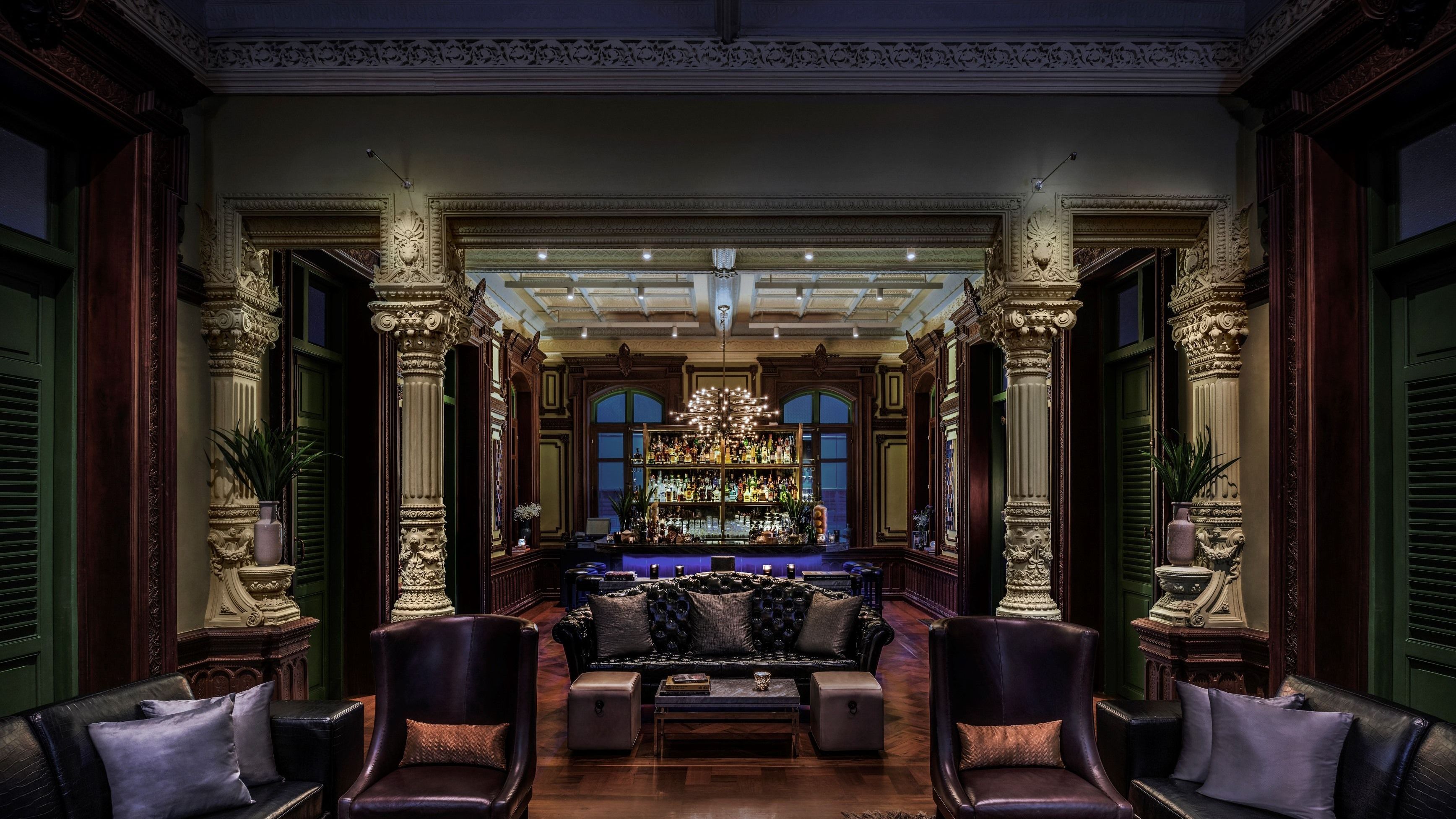 One of the many things we love about Bangkok is that the city is never lacking of new trendy bars to check out. This month, the city is brimming with new secret speakeasies and sweet cocktail menus, giving us an endless list of reasons to celebrate the last month of the year in style. From an Australian wine pop-up to chocolate-inspired cocktails, here are all the new spots you need to sip, toast, and clink at this month. There’s a hot new rooftop bar in town, and it’s not fooling around. Lebua No.3 opened just this week as a modern and upscale new hangout on the 52nd floor of the Tower Club at Lebua. The Hangover movie fans may be familiar with the venue, as the iconic Sirocco lies just nearby, and indeed the new Lebua No.3 too looks like a promising contender for a wild and lavish late night out on the town. Designed to be a — and now brace yourself — gin, caviar, and vodka bar, Lebua No.3 offers incredible city skyline views combined with a blend of creatively mixed cocktails, food, and an extravagant sprinkling of Bangkok’s glitterati as guests. Enter via an elegantly lit spiral staircase, before exploring the three indoor and outdoor spaces, each decorated in a different theme. Between copper accents and satin-glass finishings, the highlight is definitely the digital retina-display dance floor, said to be the first of its kind in the world, and making for a night on the floor you won’t quickly forget. Absolut Vodka have also created an exclusive blend of Absolut Elyx especially for the venue, best enjoyed at the outdoor caviar bar. Naturally, caviar is casual here. (But of course, would you expect any less?)

Their cocktail menu may be called ‘Propaganda’, but we certainly don’t need any convincing to head to Sukhumvit’s hottest new hidden bar, Libération. From the team behind Thonglor’s much-loved Rabbit Hole, Libération joins Bangkok’s ever-growing scene of speakeasies with drinks prepared by Backstage Cocktail Bar’s Gov Chortubtim, Tropic City’s Joey Parkobdee, and Rabbit Hole’s Chacha Singsuwan. The menu aims to deliver a liquid interpretation of propaganda posters from around the globe, giving a dangerous and exciting vibe to the exclusive and seductive wood-panelled bar setting. Try the ‘Rebel’s’ (THB 390), inspired by a Che Guevara poster from 1968, made with clarified milk punch, blended rum, coconut juice, fresh pineapple, milk, cinnamon, Redbull reduction, and fizz; or the ‘SHHHHZZZZ’ (THB 390), inspired by the legendary ‘Silence means Security’ poster from the 1940s, made with Tio Pepe, apricot liqueur, Fingers Cordial, and tonic. The dark, snazzy bar is still in its soft opening phase, but the allure of the place is already causing plenty of (secret) buzz.

It’s a bit of a loud location for a speakeasy, but then again Australian winemaker Penfolds certainly provides lots to sing from the city rooftops about. For five nights only and for the first time in Southeast Asia, Penfolds is launching Max’s Speakeasy – a pop up bar in the heart of Sathorn. Named after Penfold’s revolutionary Chief Winemaker Max Schubert, the neon-clad bar is inviting guests to indulge in the bold and passionate spirit of the brand. From 4-8 December, there’ll be a different theme every night, with multiple chances to win a bottle or two of the renowned wine. The speakeasy is located in an iconic yellow heritage house on Sathorn Road (you know the one), and you will need a secret code to enter. Find it here.

If your thirst for a good speakeasy is not yet quenched, head to one of Bangkok’s best: Backstage Cocktail Bar. The first bar in Thailand to be founded by a group of leading bartenders (they call themselves ‘Backstage Boyz’), Backstage has launched a new cocktail menu – aptly in line with its theatre theme – inspired by a trip to the movies. Enter behind a heavy unsuspecting red velvet curtain, and try the Saw-inspired ‘Jigsaw’s Cheek’ (THB 390) made with Bourbon, Amaro, Backstage’s mulled wine, and grapefruit foam; or The Godfather-inspired ‘Speak Softly Love’ (THB 420) made with Lapsang Souchong tea infused Scotch Whisky, Limoncello, almond liqueur, chocolate tobacco bitters, and olive brine shrub. A fruity and funny one is also the There’s Something About Mary-inspired ‘Blondie’ (THB 390), made with Chrysanthemum vodka, Amaro, lemon curd, yogurt, cloudy apple and pear juice, and candy floss. (Yes, the candy floss refers to Mary’s hair in that scene). For an insider’s tip that is not on the official menu, try this: co-founder Neung Kanivichaporn’s exclusive ‘Pink Me Up’ cocktail, Thailand’s entry to the Bacardi Legacy 2019 Competition. You sipped it here first.

With an art deco theme and a name like Baby Bar, it’s hard not to fall for Ari’s sweet new haunt. Located inside the Craftsman Hotel, Baby Bar joins the infamous trendy neighbourhood as a dreamily pink-hued café by day and vintage-inspired bar by night. The signature cocktail list includes charming drinks like the ‘Mama Mellow’ (THB 240), made with baileys and chocolate bitters, and topped not with a cocktail olive but a toasted marshmallow. A must-‘gram is definitely the ‘Daydreaming Drop Shot Cocktail’ (THB 300), combining cucumber syrup, grenadine, lychee liqueur, banana liqueur, strawberry liqueur, blue Curacao, hard syrup, and, to top it all off, edible glitter. Non-alcoholic favourites for the morning after are also available, with the matcha latte bubble teas gaining great praise from visitors at the moment. With a live band playing by the pool on selected nights, Baby Bar provides yet another reason why Ari is a hipster’s dream come true.

Celebrating its anniversary last month, we’re dropping jaws and popping eyes at the fact that Asia Today is only just a year old. Quickly rising as the subtle yet sexy new bar putting China Town’s Soi Nana on every cool kid’s block, this month the bar helmed by the same guys behind Teens of Thailand is giving us a few good boozy reasons to end the year in sweet style. The new Cocoa Menu uses festive cocoa as its key inspiration and ingredient, as a sweet continuation from last season’s Thai honey-inspired menu. Order the ‘Vino Cocoa’ (THB 340), made with local cocoa wine, Worthy Park Single Reserve, Isaan rum, Rumbar Silver, lime, and sugar. It comes topped with a rice cracker snack – a perfect savoury complement especially crafted to suit the drink. To end your night, order the cocoa dessert shooter (THB 320), made with chocolate Bourbon liqueur, green Chartreuse, ginger beer, and dried coconut, served in a cocoa bean cup. Cheekily named ‘Cocoa, Do You Love Me?’, it’s a testament to the fact that Asia Today, Bangkok does really love you.

For all those times Bali may seem a little too far from Bangkok, a new bar has opened in Sathorn to bring the Indonesian island vibes straight to the heart of the business district. Set in a wooden house much reminiscent of a stranded beach shack, Ku Thai Bar is the city’s chill answer to a relaxed beachside bar hut. Sit on the floor on colourful beach blankets and cosy cushions and enjoy an array of tropical cocktails with a charming Southeast Asian twist. With a focus on Thai liquors and local fruits, definitely try the Coco Palm (THB 370), made with Phraya rum, coconut milk, pineapple, and lime. There’s also a live band on Fridays and Saturdays, whereby the Thai instrument players knock out contemporary hits on the Thai xylophone, flute, and drum. It’s extremely casual and laidback, but perhaps that’s exactly what Sathorn was missing.

Drinks Bangkok Lebua where to drink Backstage Cocktail Bar Bangkok bars Asia Today Bar Liberation Bangkok Ku Thai Bar Baby Bar Bangkok Lebua No.3
Lisa Gries
Creative Content Director, Bangkok
Lisa loves to travel, and is always on the lookout for the world’s best nap spots. She’s a serious Asian art history nerd, and has a knack for languages and coffee table books. She hopes to publish her own novels one day, one of which will likely be called ‘All The Great Conversations I Had In A Bangkok Speakeasy.’ It’s a work in progress.
Travel Drinks Dining Watches

Why you should replace your cappuccino with a camelccino