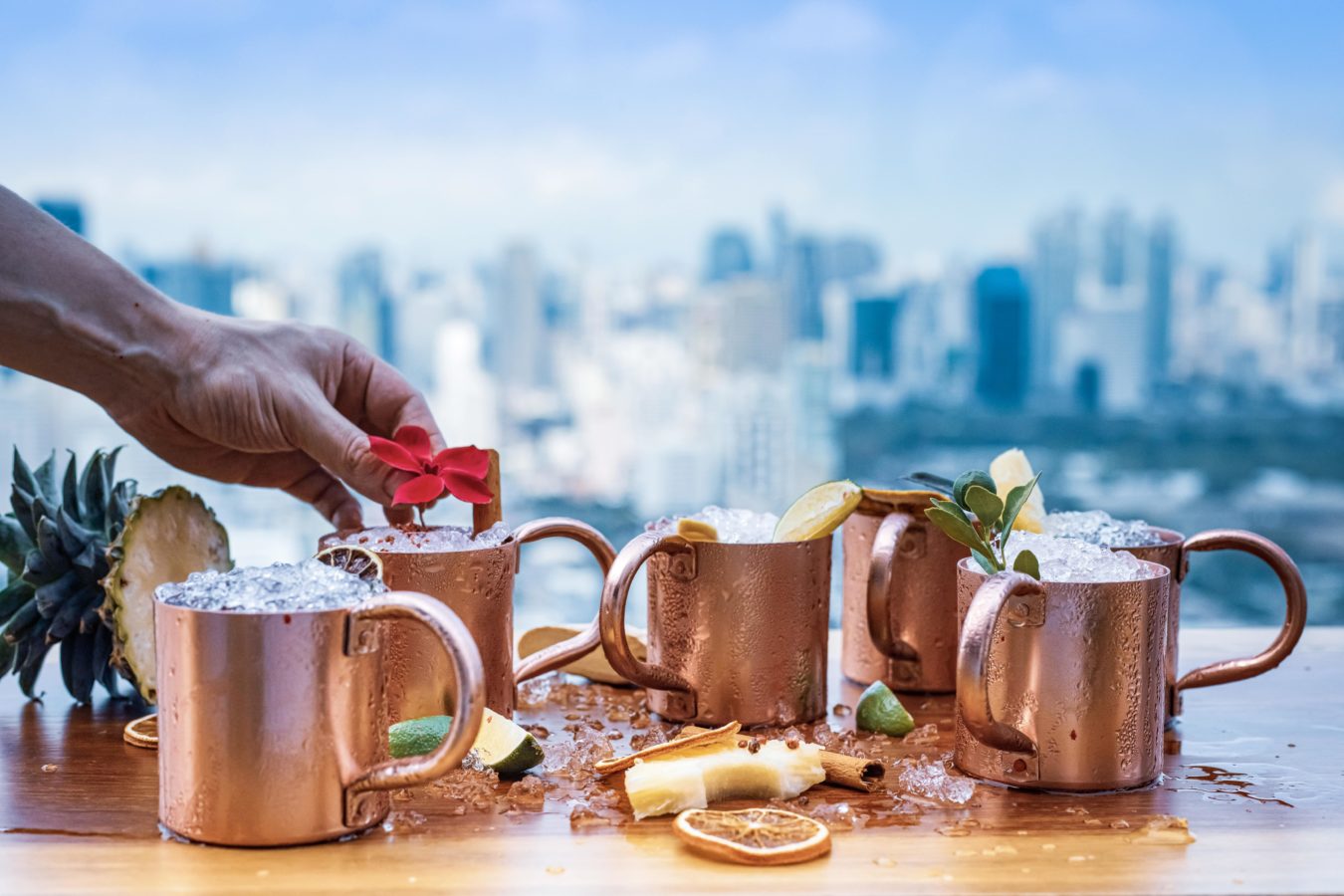 Where to drink responsibly in Bangkok this August 2020

After a short hiatus from this monthly column, our ‘Where to Drink’ has been revived for the second half of the year, after surviving what’s been a wild ride between a pandemic, alcohol bans, curfews, and a series of extremely saddening permanent bar closures.

It’s been a tough few months for the drinks industry and the hospitality industry as a whole, which is why we’re happy to see many of our favourites reopening, and many new spots joining the scene. Here, we’ve put together a list of new (and old and gold) places you need to know about this August, as we slowly start to safely head out again.

We’re happy to see you back here, we hope you’re not still scarred by our opening sentence (it was a metaphor), and we look forward to seeing you at these spots soon. Be sure to drink responsibly, and be sure to tip your bartenders, too.

We may not be able to travel abroad just yet, but if you’re looking for an escape, Bar Yard may be your next calling. Located atop the trendy Kimpton Maa-Lai hotel, Bar Yard has opened as a tropical rooftop garden bar and barbecue, very much reminiscent of a day club. Super vibe-y and already proving a popular spot come sunset and beyond, expect tiki-influenced cocktails (with charming tiki-influenced glassware to suit), as well as an extensive food menu featuring farm-to-plate barbecue-style dishes. Bangkok’s latest urban oasis in a super trendy area.

We loved Wasteland from the get-go because it named itself ‘a community sipping space,’ and we loved it even more upon finding out that the ‘waste’ in ‘Wasteland’ is actually the star. Whilst this new bar is still in its soft-ish opening stages, there’s a lot that is familiar about it. Wasteland takes over what used to be the renowned Bo.lan restaurant, aiming to be a sustainable and eco-friendly bar. The faces behind the bar are those you may know from Liberation, and the conversations they’ll spark with you are based all around agriculture, environment, and experiments in using otherwise ‘waste’ products to make some incredible cocktails.

Has Siam just found its most Instagrammable new hot spot? Certainly hitting all the right design notes, Paradise Lost has (softly) opened atop the Siam@Siam hotel, as a millennial-pink-clad tropical rooftop bar. Between a loud, eclectic soundtrack and sprawling views of the city, here you’ll find an extensive and creative cocktail list in very stylish surroundings. There’s a whole story to the concept which touches on the bar being a kind of safe-space party-haven post-apocalypse, and here we can certainly imagine ourselves partying as if the world were ending tomorrow. They serve food that goes beyond mere nibbles too, which is great if you’re hungry, and there’s a ton of jokes packed into the menu which surely adds a lot of charm as well. Paradise lost? Paradise found.

No need to do a double take. We know that Just A Drink Maybe is a familiar name, but this is not the Just A Drink Maybe that you once knew. They’ve shifted to Sathorn from Thonglor, bringing the business district a relaxing spot to unwind for after-work drinks but also coffees and casual dishes for breakfast. They open from 7am — so it’s on you whether you’re going for that avocado toast or a cocktail before noon. We’re definitely never going to judge you.

There’s no error in the title. It is the House of Heals and not “heels,” though there’s certainly plenty a heel indoors. The iconic Thai drag queen Pangina Heals has opened her own bar, and it’s likely you’ve spotted the wild performances in this new space all over your friends’ socials. House of Heals is so happening right now — and it’s not hard to see why. Located close to Victory Monument, the dragshow bar has special performances on the nightly, with various different themes. We love the bold (very pink) decor, and when we’re there it’s reminiscent of Sundays at Maggie Choo’s in the olden days — just cranked up a few notorious notches.

We’re still yet to visit this one, but we’re so, so intrigued by what we’ve seen and heard. Inspired by the Thai ‘Himmapan Forest,’ Bar Thewada (or Bar Angel) offers an escape of a mythical and mystical kind, in a way we’ve hardly ever spotted before. Located in Thonglor, the bar is inspired by religious tradition, with everything from the decor down to the drinks menu clearly influenced by both Buddhist and Hindu traditions. A bar that may just leave you feeling very blessed.

Vesper has heard your travel-ban woes and has found a wonderful quick-fix for everyone who was hoping to be in Hong Kong, Singapore, or Seoul this summer. Launching a new menu (and a trip and sip around the world too), the beloved bar is now bringing the cocktails of its friends from around the region to Convent Road. Listed as No.11 on the Asia’s 50 Best Bars themselves, Vesper has now joined forces with Singapore’ Jigger & Pony (No. 1), Tokyo’s Bar Benfiddich (No. 15), Seouls’ Charles H. (No. 29), and Hong Kong’s Caprice Bar (No. 34), as well as the MO Bar (No. 46) at the Singapore Mandarin Oriental. With two signature recipes from each of the bars to choose from, the special menu will be available throughout August and September, serving as a fine ticket to some of the region’s best. No travel, no problem.

You’ll know this if you’re a die-hard rum lover, and you’ll appreciate this if you’re a fan of all Asia Today, Philtration, and Tropic City. International Rum Day is coming up this month, and there is perhaps no better place to celebrate than at Charoenkrung’s dearest Tropic City. Kicking off the season with a Battle of the Bar Takeover, Philtration’s Shavinraj “The Fairy Godfather” Gopinath will be battling out with Asia Today’s Toon Kiattikoon for an epic showdown. Guests, viewers, and fan girls will also get to order from a special drinks menu, as well as a selection of rum flights. Sure to be a fun-filled evening, the event is taking place on 16 August from 5pm onwards, and you can find out more on the Facebook Event Page.

Supported by Campari Group, Alchemy Wines & Spirits Thailand has been doing its fair share to help the bar industry during these trying times, and as part of its Shaken not Broken Thailand fund, has another interesting event in the pipeline. This time supported by Glen Grant, they will be hosting a Mini Classical Concert on 29 August, where 100% of proceeds will go to hospitality workers facing economic hardship due to the pandemic. Taking place at the beautiful Celadon at the Sukhothai hotel, there’ll be a whisky cocktail reception followed by a mini classical concert and dinner. It’s THB 3000 a ticket, which includes both food and drink by Chef Asker Skaarup Bay and Campari Group Brand Ambassador Davide Sambo. The dress code, naturally, is a shade of green, and you can find out more on the Facebook Event Page.

Drinks Vesper where to drink Campari Just A Drink (Maybe) Bangkok bars Tropic City Philtration House of HEALS Wasteland Paradise Lost Bar Yard Bar Thewada
You might also like ...
Food & Drink
Weekend muse: now more than ever, tip your bartender
Food & Drink
The World’s 50 Best Restaurants is releasing a recipe e-book by renowned chefs
Food & Drink
5 female bartenders shaking up Bangkok’s bar scene
Food & Drink
5 new Bangkok restaurants to try this August 2020
Lisa Gries
Managing Editor, Bangkok
Lisa loves to travel, and is always on the lookout for the world’s best nap spots. She’s a serious Asian art history nerd, and has a knack for languages and coffee table books. She hopes to publish her own novels one day, one of which will likely be called ‘All The Great Conversations I Had In A Bangkok Speakeasy.’ It’s a work in progress.
Travel Drinks Watches