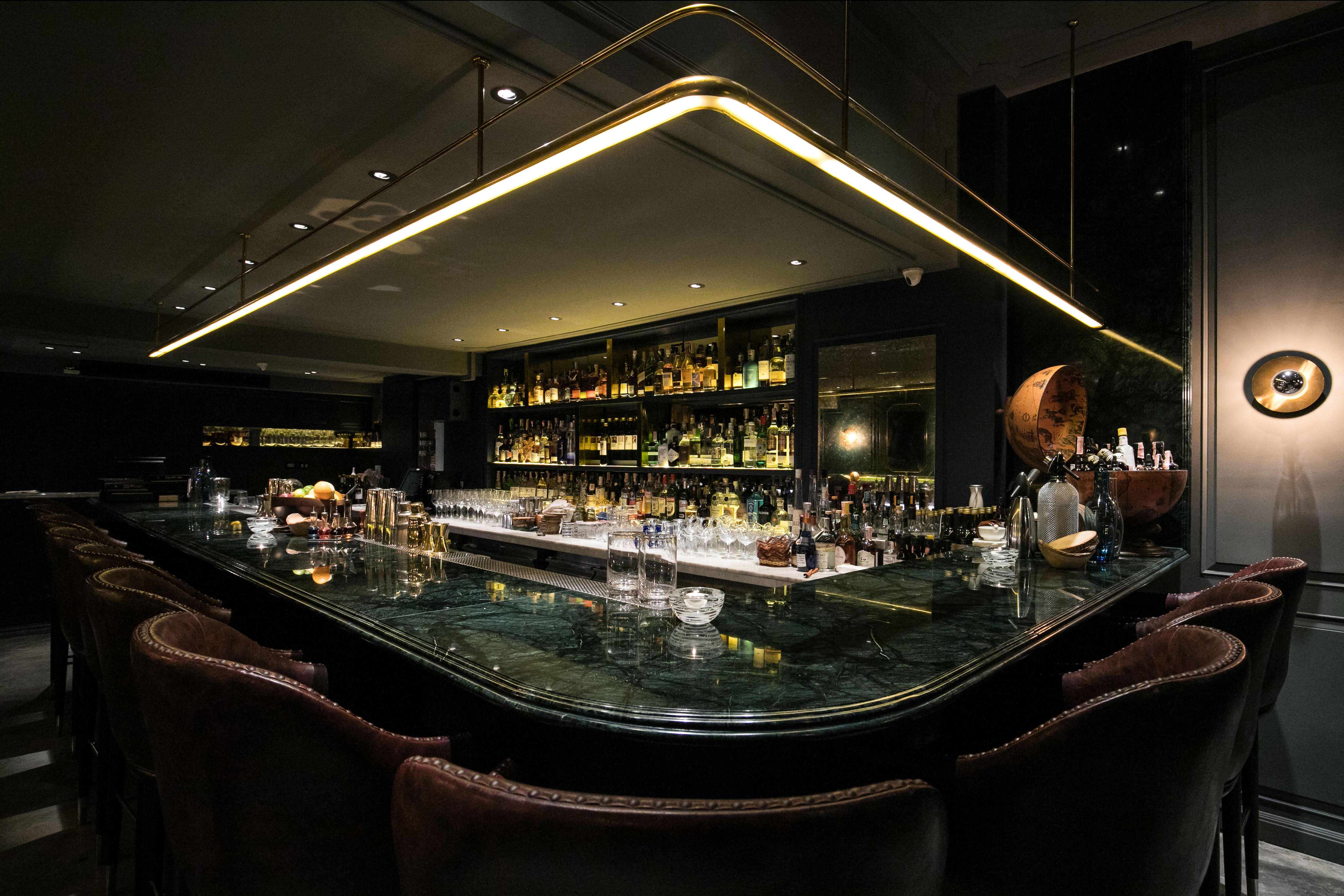 A bar fit for the world’s most famous secret agent, Vesper quickly became one of the city’s most popular dining and drinking destinations since its opening in April 2014. The brainchild of husband and wife Choti and Debby Leenutaphong, Vesper was inspired by the couple’s time in London, seeking the source of a James Bond novel for its sleek namesake. Since then, the Silom hotspot has shaken and stirred together countless awards, most notably ranking in Asia’s 50 Best Bars for three consecutive years.

After a quick renovation in November of last year, the original Vesper was split into Mediterranean bistro Via Maris to the left, and the all-new Vesper Cocktail Bar to the right, allowing the latter to focus entirely on its much-loved cocktail creations. With a refreshed menu inspired by the Modern Art movement of the 1860-1970s, we recently visited the renaissanced Vesper Cocktail Bar to sample a sip of their creative and experimental interplay of art and mixology.

Vesper Cocktail Bar gets its name from the famous Vesper Cocktail: a gin, vodka, and Kina Lillet Martini invented by Ian Fleming in the 1953 James Bond novel ‘Casino Royale’. And indeed, between the pine green marble bar, pink chairs, gold accents, and warm daft punk lights, there’s a flair here that is easily reminiscent of a Mayfair hotel bar, with an eclectic twist. It’s intimate enough to enjoy a private conversation at one of the tables, yet open enough to chat with passionate bar manager Palm about his inspired concoctions. Upbeat yet unobtrusive tunes mingle between tables and tales, honed by a private playlist especially created by the owners and members of the Vesper team. Every Friday night, a DJ spins a combination of 80s synth, disco Motown, and nu-electro funk, which we are told is easily one of the finest evenings in town. It’s glamorous yet in no way intimidating here, and there is a laid-back ease that feels old-school, moody, broody, and yet very, very cool.

Draining out the crowds of Convent Road right outside with its smooth, heavy curtains, Vesper’s interior could easily steal the show, yet it is the drinks menu that really entices anyone that comes here. A menu with cocktails bearing interesting names will always tally up cool points to any location, yet Vesper ups the ante far beyond with a cocktail list that is well-curated and beautifully presented. Dubbed ‘The Art Book’, the menu features a selection of over 50 classic and modern classic cocktails, inclusive of a collection of 15 Modern Art-inspired showstoppers. It’s like an art gallery by the glass, as each of the specialty beverages have been inspired by a specific art piece, deciphered and reinterpreted in fluid form.

The first cocktail we were served was the ‘Seated Woman with Bent Knee’, inspired by the 1917 painting of the same name by Egon Shiele. Made with spices-infused Tanqueray, dry Vermouth, apricot, passionfruit, grapefruit, and tonic, the orange-hued drink is a refreshing one to start with, and packs a spicy punch of personality — much like a lady. The flavours are sweet and zesty, yet with a fizz and a tang, giving off an air of mischief, just like the woman in the portrait.

Next we were presented with a cocktail inspired by František Kupka’s 1924 cubist painting ‘La Forme de Bleu’, which explores the absolute primacy of blue colour, and the many layers it entails. Fittingly bright blue in colour, the elegant cocktail is made with Diplomatico Planas, Diplomatico Reserva Exclusiva, coffee-infused Vermouth, Blue Curaçao, lemon, and egg white, topped with a blue sugar garnish. Whilst the appearance in itself already holds distinct layers, the interpretation of the painting goes further to develop deep nuances in flavour. We were welcomed by a soft egg white froth first, before diving into the fresh hints of the Blue Curaçao, and a subtly surprising velvety coffee after-taste. It’s an unsuspecting sip, and yet wholly intriguing.

One of Vesper’s best-selling cocktails, ‘The Flower Carrier’ inspired by the 1935 painting by Diego Riviera consists of a Bacardi Carta Blanca, Malfy con Limone, Chardonnay wine, Osmanthus tea from Northern Thailand, and lemon. Delicately assembled with utmost precision and a tweezer, the fine cocktail is garnished with a colourful selection of real flowers — almost a craft in itself. Like summer in an iced goblet, it’s easy to see why this fragrant and feminine choice proves a popular one for avid ‘grammers, and brings into bloom a beautifully South American cocktail with a touch of local Thai beauty.

Perhaps our favourite of the book, the Jackson Pollock-inspired ‘Autumn Rhythm No.30’ holds a jazzy, snazzy note of flavour, much-fitting with Vesper’s interior concept. Made with Bulleit Bourbon, Mount Gay Black Barrel, truffle oil, dried figs, cacao powder, and maple syrup, the cocktail boasts a coloured array of autumnal flavours. Just as we were about to reach in for a sip, skilful bar manager Palm lit the accompanying bay leaf on fire, immediately emitting a smoky aroma, much like that of a bonfire on a New York rooftop in November. It’s a strong and sophisticated cocktail, yet is not overwhelmed by its truffle scent, nor the melodious taste of the white chocolate-covered fig that is served alongside it. The ingredients read as if they could not work with one another, yet much like an abstract painting, come together to create something that is expressive, and deeply impressive.

Our last cocktail of the night was the ‘Message from the Forest’, inspired by the 1936 surrealist painting by Marie Čermínová, most commonly known by her pseudonym ‘Toyen’. Featuring earthy and woody flavour notes, the cocktail is made with Bulleit Rye, beetroot, kaffir lime, dill, and ginger beer. It’s a haunting yet majestic cocktail, whereby the glass is first smoked with cloves, almost reaching out as if to lure you into Toyen’s mystical woods.

Whatever path you may take, Vesper’s art-inspired cocktails sit before their sippers waiting to be explored. You don’t have to be an art aficionado to enjoy them, yet can become a collector of sorts through a flourished flick of their new menu. As Palm explains to us, many customers come to Vesper simply to savour the flavours, both because of the brush strokes that inspired them, and dreamily unbeknownst to them.

Well-researched and beautifully executed, it’s hard not to fall entranced to the charm of this warm European vintage-style bar. From canvas to coupe, there is love and thought in every detail — from the elaborate presentation of drinks to the endearingly illustrated coasters. Kick back with cocktails that in themselves are tantalising conversation starters, and let them paint your town red (or Hockney green, Warhol pink, Curaçao blue), and it’ll be easy to see why so many bid high for Vesper as their preferred evening out. Where picturesque interiors and well-functioning air conditioning are paramount in Bangkok, these are achievable almost anywhere; yet in a city with so many new bars popping up every day, to keep loyal customers always coming back for more is an art form that Vesper Cocktail bar has truly and deeply mastered.

Drinks Cocktails Bar Vesper Cocktail Bar Bangkok bars Via Maris Modern Art foodie collection
Lisa Gries
Managing Editor, Bangkok
Lisa loves to travel, and is always on the lookout for the world’s best nap spots. She’s a serious Asian art history nerd, and has a knack for languages and coffee table books. She hopes to publish her own novels one day, one of which will likely be called ‘All The Great Conversations I Had In A Bangkok Speakeasy.’ It’s a work in progress.
Travel Drinks Watches