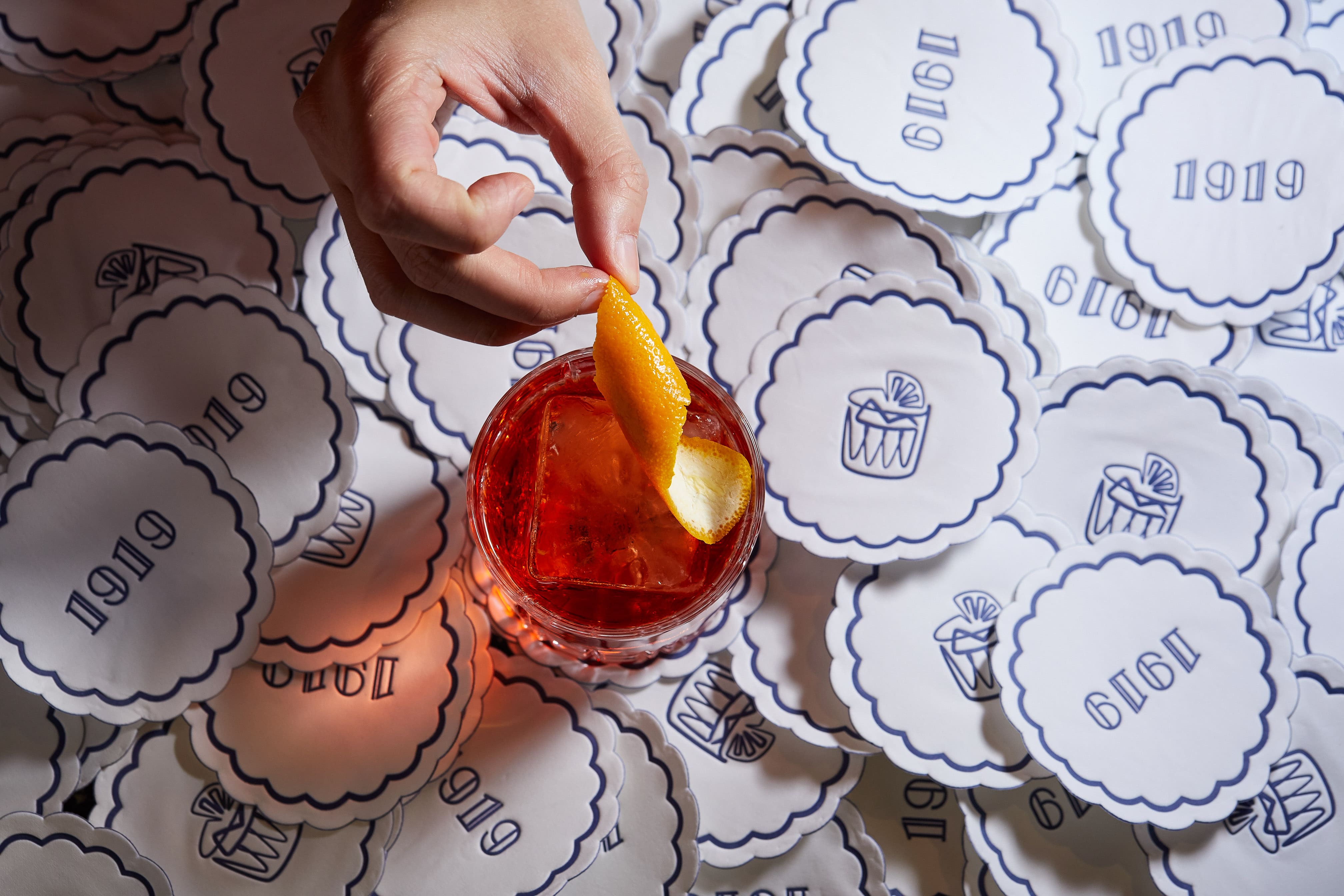 A secret drinking rite of passage dictates that you will only start to really like Negronis after you have sipped at least four of them. It’s a bitter-sweet cocktail, made with Campari, gin, and vermouth, and is an acquired taste. Ah, but once you’ve fallen into its trance, the Negroni becomes hard to resist and is a beloved drink of choice for many. Welcome to 1919 Italian Bar & Restaurant, where you may just jump the queue and sip four in one night, in the company of rad tunes and great food, and understand real quick why this beverage, this culture, and this new Silom eatery may just become your next favourite hangout.

The brainchild of the team behind the famed Foodie Collection, 1919 is cosily nestled right next to the group’s beloved Vesper cocktail bar. The new spot mirrors Vesper in many ways, with even each the marble bars symmetrical to one another, and an ambience that is equally as vibe-y. Nevertheless, 1919 has its own distinct character. We recently headed down leafy Soi Convent to feel it out. Read on for our tell-all.

If you never thought you could sip a cocktail alongside a slice of labneh cheese and honey pizza, whilst a Biggie Smalls tune plays in the background, think again.

The vibe at 1919 is chill. The space feels like a complete transformation to Via Maris or even Vesper restaurant before, and yet sports a lot of the same charms. Vintage Campari posters adorn the walls for high ‘grammability, and a neon red light sign (goodness, how we love a neon red light sign) spells out a seductive “we own the night”.

It is a place that perfectly captures that in-between feeling of not being a pretentious white tablecloth Italian restaurant but also not being an overly casual haunt. There are standing bar tables at the entrance (we jokingly dub this the “friend zone”), with more intimate sit-down tables for family and friends, and groups towards the back (which we jokingly dub the “date zone”). A very intriguing display of Italian spirits and liquors make the bar (enlarged to fit diners) our favourite spot to sit.

Whilst there is a lunch menu too, we dropped in to 1919 for dinner, or rather aperitivo (and then got carried away, and yes — had dinner).

The menu accommodates for both casual light bites and full feast-your-soul cheat day meals, with oysters and cold cut platters for the former, and a varied menu of starters, pizzarettas, pasta, and meats for the latter. The concept is very much suited to sharing, and ordering a multitude of dishes, what with pizzarettas instead of pizzas (they’re smaller) and options for smaller or larger portions.

Foodie Collection aficionados will recognise classics like the Strawberry & Truffle Salad (THB 290) from La Dotta, or their infamous Bomboloni (THB 120) for dessert. A cute throwback lies also in the Vesper Pizzaretta (THB 290), a signature from “back in the day.” Nostalgic.

From Chef Francesco Deiana’s new menu, we love the Truffle Pizzaretta (THB 650) starring butter and Italian black truffle, topped with a slow-cooked egg for an indulgent bite. While high on indulgence, definitely also go for the Carbonara Roman-style (THB 490 for the large option), made with cured pork cheek (not bacon!), pecorino romano, and egg yolk. For those who love yet another classic, the clams sautéed in white wine and garlic sauce (THB 290) also make for a great accompaniment with sweet potato bread (yup) provided as the ideal dipping boat for that tempting sauce.

For dessert, the Chocolate Lava Cake (THB 290) is hard to miss, as well as the sweet selection of Italian gelato (THB 120/scoop), which ranges from Chocolate & Orange to Matcha, Tiramisu, and Fresh Figs.

In a charmingly Italian ritualistic manner, each meal is capped off with a shot of homemade limoncello, because of course.

It’s important to get this straight from the start: 1919 is as much a restaurant as it is a bar. You could come here for food only, or for drinks only, or you could knock it out of the park and live like a real Don or Donna and do both.

Two of the Foodie Collection’s most beloved have composed the drinks menu, with the groups’ head sommelier Thanakorn Mankit behind the wine list (which impressively also includes the very trendy ‘Orange Wine’ category), and Group Bar Manager Supawit ‘Palm’ Muttarattana behind the cocktails.

Food & Drink
Industry insiders weigh in: is it acceptable to put ice cubes in red wine?

The bar’s strong link to Italian aperitivo culture is no coincidence. Helmed by Palm, who not-so-coincidentally is also the winner of the Campari Bartender Competition Asia 2019, the bar is actually a collaboration with Gruppo Campari, and stands as the first Campari flagship bar in Thailand. It thereby makes for a prime location to try out some of its most classic and creative concoctions.

Obviously go for the classic Negroni (THB 300) to start, for no one in Bangkok makes a Negroni quite like how Palm makes a Negroni. At 1919, he even uses Cinzano 1757 Rosso vermouth, which in itself already is worthy of a try (it tastes like berries). The Truffle Negroni (which is very Vesper, very Palm, and absolutely 1919), features Black Truffle and highlights its flavour in a way truffle oil or mere truffle infusions could never do it (THB 490). It is a smooth and elegant sip, and arguably the new joint’s signature.

Beyond these, those who prefer lower ABV drinks, there’s a whole section in the menu for Spritzes, with the Summer in Lake Como (THB 340) a refreshing contender. The drinks list also offers Italian-inspired classics, and we like the Make Him An Offer He Can’t Refuse (THB 440) for even more than just its Godfather-inspired name. The gin-based cocktail features green Chartreuse, Maraschino liquor, lime, gorgonzola (yup), and sea salt, and is indeed hard to refuse.

Last but not least, alongside many other Italian favourites, the Grappa selection makes for a cool digestif option different to many other haunts in Bangkok, and a ‘proper’ coffee machine makes a cunning caffeine shot to end your meal. But hold up… before we leave… can we rewind the tape and head back to the entrance and look back at the brass-lettered logo and ask: where does the name ‘1919’ even stem from?

“1919. What a year. World War I just ended, and the Treaty of Versailles was signed. Bauhaus School was founded in Germany. And while the death of former US President Theodore Roosevelt was a shock, 1919 was also the year that jazz legend Nat King Cole was born. 1919 was also a year of great significance for a different reason, less so than the aforementioned, but nonetheless significant.”

Such reads the first page of the drinks menu, and it’s an apt and descriptive entry-way to your jaw dropping to realise that 1919 was actually 100 years ago. 1919 marks the year the Negroni was invented, after the Italian Count Camilo Negroni, who made it happen over at Florence’s Casoni Bar. He had asked for a bit more kick in his Americano cocktail, to which bartender Fosco Scarselli was quick to switch out soda for gin. Soon even other guests started to request “Count Negroni’s drink” and thus the Negroni was born, and thus 100 years later, 1919 Italian Bar & Restaurant celebrates this feat.

As a side note of intrigue, say the words ‘one nine, one nine’ in Thai and you’ll realise it is considered a lucky number combination, too. Just a fun fact.

Something about 1919 really challenges what it means to be an Italian restaurant and bar in Bangkok at the moment. It is neither high end nor ‘low end’, but rather its very own category. Contemporary, cool, riddled with story and cheeky anecdotes and accents, it manages to stand not in the shadow of Vesper, but really holds its own. From after-work drinks to chatty dinners or late-night cocktails, 1919 boasts an aura that welcomes you in with a sweet ‘Buona Sera’ to your evening, and shows you with great urban Bangkokian flair the Italian art of having a good time.

Bangkok Restaurant Review Vesper Bangkok Restaurants Italian Restaurant Campari foodie collection 1919 Italian Bar & Restaurant 1919
Lisa Gries
Creative Content Director, Bangkok
Lisa loves to travel, and is always on the lookout for the world’s best nap spots. She’s a serious Asian art history nerd, and has a knack for languages and coffee table books. She hopes to publish her own novels one day, one of which will likely be called ‘All The Great Conversations I Had In A Bangkok Speakeasy.’ It’s a work in progress.
Travel Drinks Dining Watches