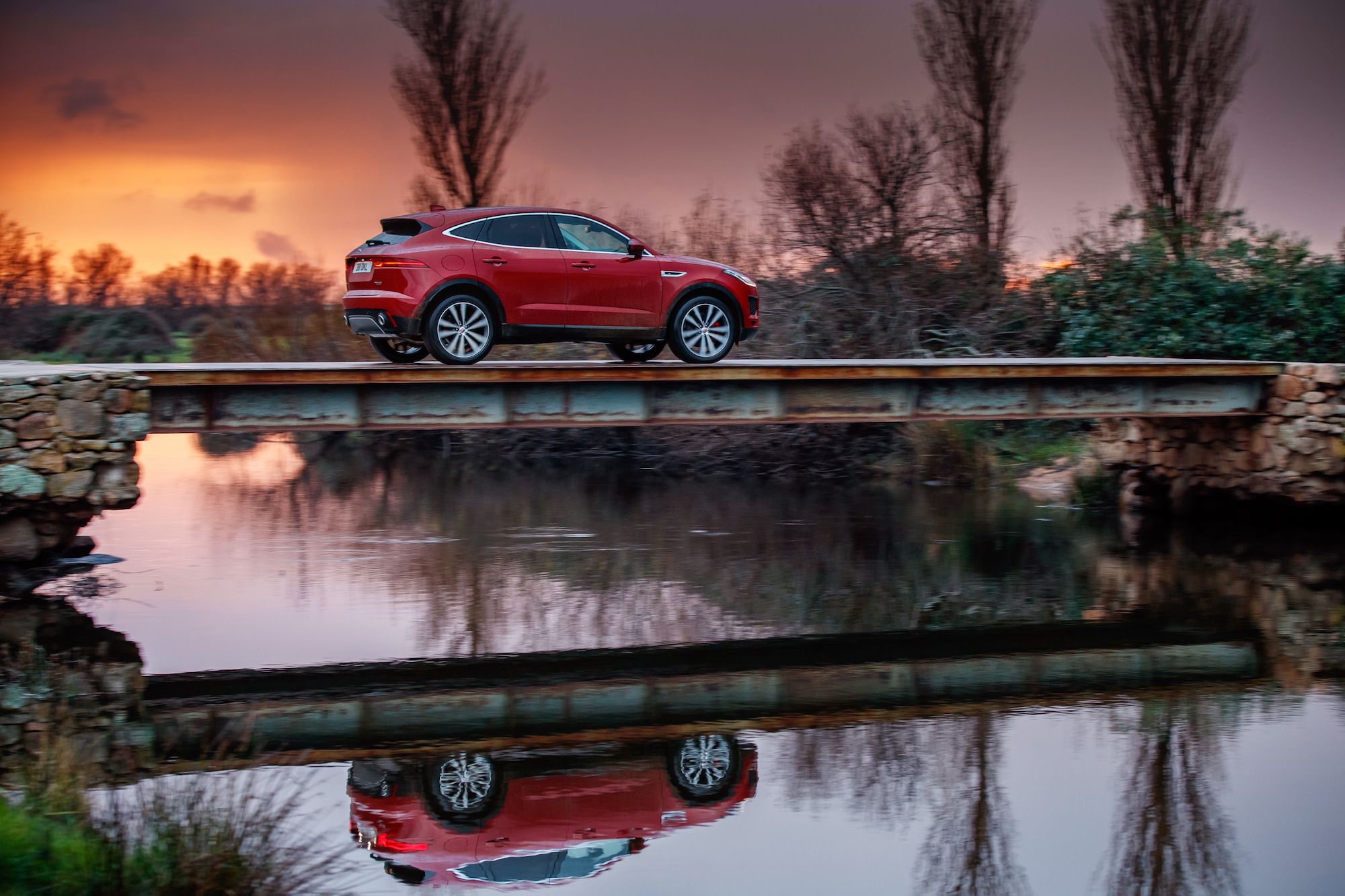 Audi has its Q3, Mercedes has the GLA, and Alfa Romeo recently launched its Stelvio. The idea of compact SUVs might seem distant for Jaguar and its pedigree racing heritage, but man cannot live on fast cars or swanky sedans alone. And so there’s the new E-Pace, a five-seater performance SUV that’s quite the elegant looker despite its power. You know, the typical Jaguar stuff.

Now that the F-Pace has achieved in sales alone the equivalent of all the other cars collectively for Jaguar, the E-Pace has big shoes to fill as its smaller sibling. Don’t be confused by its name — it’s strictly internal combustion and not electric. You’ll have to look to the I-Pace due sometime this year for the latter.

At 4.4 metres long and 1.65 metres tall, the handsome SUV is substantial but compact, and has been heralded the best executed car in the Jaguar’s stellar line-up — including the F-Type — for impeccable handling, evocative design and refined comfort. Its real competition, however, lies outside the den and in the real world, where luxury firms are churning out SUVs faster than their consumers can keep up.

Here’s how Jaguar’s new E-Pace plans to stay ahead of the competition.

It’s not anywhere close to being a mini F-Pace. Jaguar’s design director Ian Callum has pretty cars such as Aston Martin’s Vanquish and DB9, as well as Jaguar’s C-X75 and F-Type to his name, so naturally the E-Pace was destined for aesthetic greatness.

Even though Callum looked to the F-Type sports car for inspiration, the E-Pace doesn’t lack the design practicality of a SUV. There’s a racy roofline, but adequate dimensions for those at the back. The muscular haunches taper to the rear for a powerful stance that complements the fascia’s assertive snarl that’s now synonymous with all Jags. Big wheels (21 inches) are included for good measure.

SUVs are usually designed for the whole family and that makes them boring. The E-Pace is unashamedly inspired by the F-Type, so you won’t be switching off during that family trip anytime soon.

If it’s not plush leather, it’s polished, gleaming metal that encircles vents, door inserts and the pistol-grip gear selector that replaces the less popular rotating knob. The steering wheel and seat adjust for days, so you can either lay low like the purist Jag driver you are, or sit up high and lord over everyone else in the car.

All four cylinders, and all turbocharged. The new Ingenium-badged P250 will produce 246hp and 365Nm of torque to complete the 0 to 100kph sprint in 7 seconds flat. The racier P300 version will do the same in 6.4 seconds with its 296hp and 400Nm. Both trims will give your E-Pace all-wheel drive and a nine-speed automatic gearbox.

The latest generation of Jaguar’s Touch Pro infotainment system is presented on a 10-inch touchscreen, and the customisable home screen make interactions seamless and frustration-free. There’s also the crisp 12.3-inch full colour TFT driver display as standard, which delivers crisp and rapid feed throughout your journey. There’s also the option of a heads-up display.

Clearly, the person who designed the interiors is a driver himself. The two USB sockets under the armrest’s cubbyholes come with a detent in its lid, so the cables do not get pinched as they trail out into the cupholders.

Door pockets are now hollowed at a 45-degree angle so your bottles don’t rattle incessantly as you drive. The panoramic glass roof begins slightly behind the driver’s head to prevent any hint of glare during sunny days. At the back, even the biggest passenger’s feet wouldn’t get wedged uncomfortably under the driver’s seat at its lowest.

A Jaguar has to be nice to drive, regardless of whether it was designed to ferry VIPs or negotiate around the apex. The E-Pace is a big cub, and if they planned for it to drive like the XE, they’ve achieved about as good as it realistically can. It’s responsive and accurate, not in a heart-stopping fashion, but in a sensible way, with the trademark Jaguar steering feel that automatically puts you at ease.

Jaguar Compact SUV Luxury Cars Luxury SUV Jaguar F-Pace Jaguar F-Type Jaguar E-Pace new cars 2018 new cars in Singapore
Shatricia Nair
Managing Editor
Shatricia Nair is a motoring, watches, and wellness writer who is perpetually knee-deep in the world of V8s, tourbillons, and the latest fitness trends. She is fuelled by peanut butter and three cups of coffee a day.
Motoring Wellness Watches Beauty Style
Sign up for our newsletters to have the latest stories delivered straight to your inbox every week.