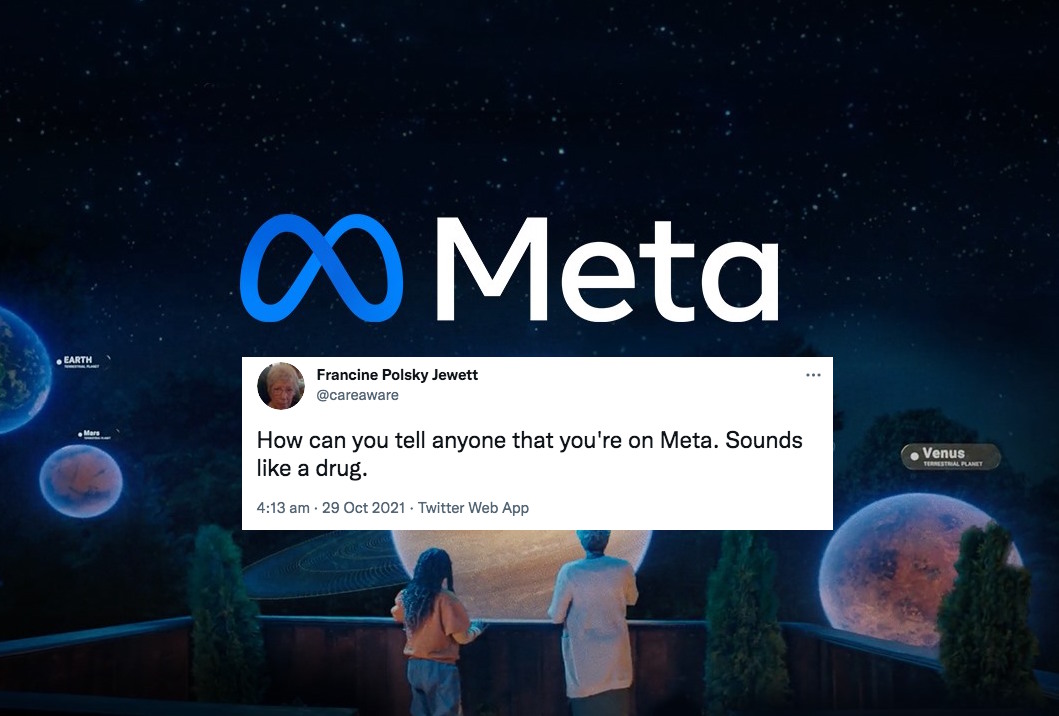 Facebook’s announcement Thursday that the company would henceforth be called Meta unleashed a torrent of hilarity on Twitter from companies, people and even the social media giant itself.

While critics pummelled Facebook over the change, claiming the rebranding aims to distract from the company’s scandals, the internet still had a good laugh.

Here are some highlights of the meme and pun-fueled wisecracks:

Meat jokes were all the rage, with US hamburger chain Wendy’s tweeting shortly after the news: “Changing name to Meat.”

Remaining true to its word, the chain did just that — but only on its Twitter profile.

A tweeting wit under the handle @NicoTheMemeDude queried: “Is this the beginning of the Meataverse?”

To which Wendy’s retorted: “very meta.”

How can you tell anyone that you're on Meta. Sounds like a drug.

Though Meta will just be the name of the parent company, and the app will still be called Facebook, some observers were concerned.

“How can you tell anyone that you’re on Meta. Sounds like a drug,” wrote @careaware.

The social network’s new name spurred plenty of disappointment too.

“Why did Facebook pick ‘Meta’? ‘Meh’ was taken,” wrote @maxgoff.

For lots of people, meta will forever describe something that refers back to or is about itself, like a film about people making a film about filmmaking.

Despite the jokes, Facebook’s critics were not amused by the name change, which they argued dodges the real issue.

“The name was never the problem,” wrote an activist group calling itself The Real Facebook Oversight Board.

Tech Meta Mark Zuckerberg Facebook
You might also like ...
Gear
The best Twitter reactions to the Facebook and Instagram outage on Monday
Gear
Everything we know about Facebook’s venture into wearables
Gear
How Mark Zuckerberg aims to help small businesses on Facebook and Instagram
Gear
How the new Google Pixel 6 aims to take on Apple and Samsung
Lifestyle Asia
Here's where you can read the latest news and stories from Lifestyle Asia and our sister titles PrestigeOnline and Augustman, curated from all of our editions in Hong Kong, Singapore, Kuala Lumpur, Bangkok and India.
Luxury