Home > Gear > Tech > What is Bored Ape Yacht Club and why is it the latest NFT craze? 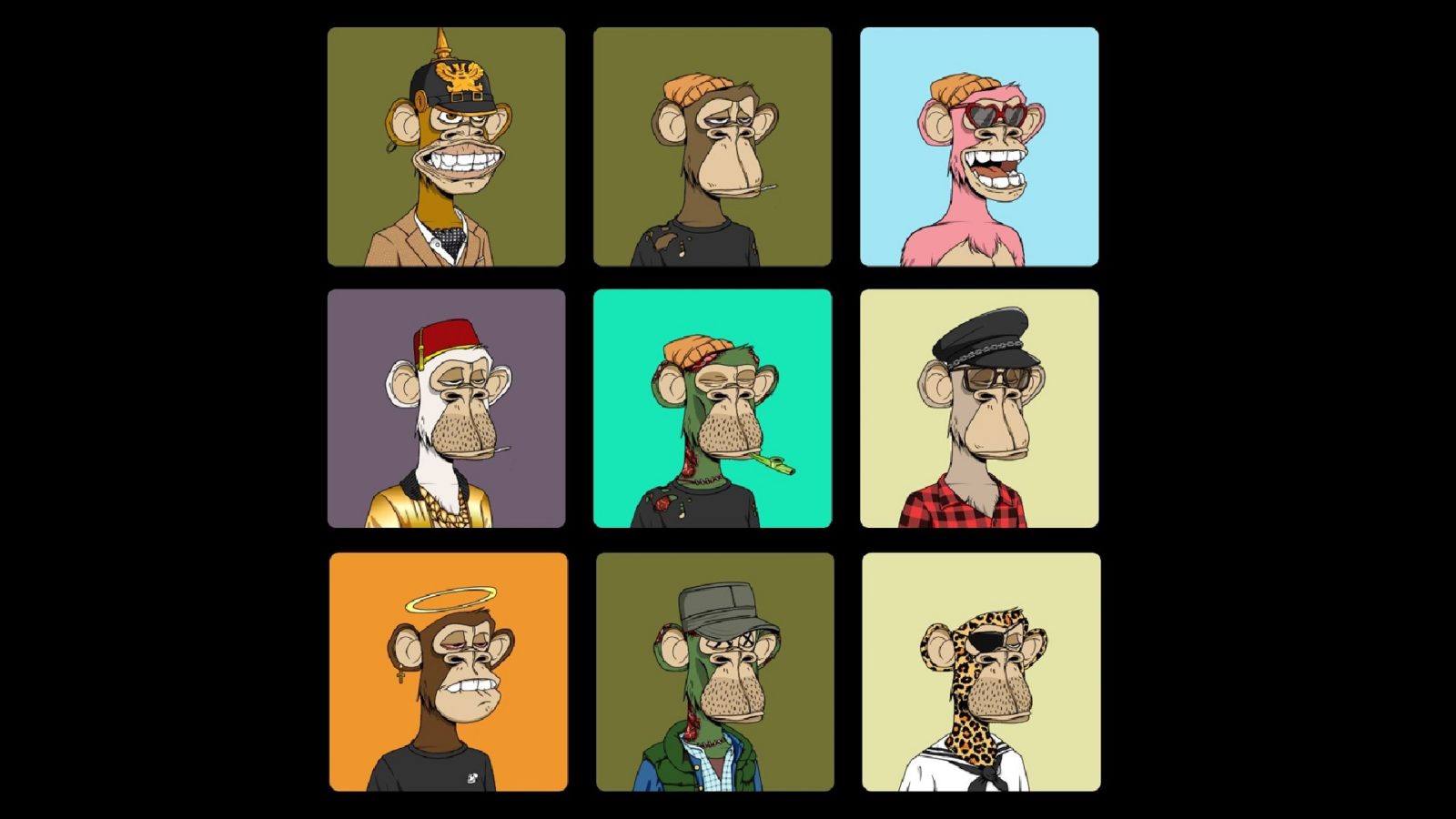 What is Bored Ape Yacht Club and why is it the latest NFT craze?

Gear
What is Bored Ape Yacht Club and why is it the latest NFT craze?
Share this article
Next article

Have you been noticing a few monkeys floating about the interwebs? Here’s why the Bored Ape Yacht Club (BAYC) is causing so much furore.

Bored Ape Yacht Club (BAYC) — the name won’t ring a bell if you are not familiar with the non-fungible token (NFT) game. However, you might have seen the creation, especially if you have an interest in quirky profile pictures.

The project is similar to Larva Labs’ CryptoPunks, but cheaper. The apes of BAYC, pictures of which are minted on Ethereum blockchain, have inspired many other NFT art and artists. Their value has risen astonishingly high in a matter of months.

So what is so special about a bunch of otherwise artistically aesthetic apes? A lot, both in terms of financial value and in terms of exclusivity. Here’s why.

The richly detailed ‘bored apes’ are the brainchild of two friends known in the media only by their pseudonyms — Gordon Goner and Gargamel.

While Gargamel, a Master of Fine Arts, worked as an editor and writer, Goner was about to pursue his MFA before he fell ill, preventing him from doing so. Although both knew NFTs, they were artists and not programmers. So, they bought in two more friends, No Sass and Emperor Tomato Ketchup.

Together, they created the Bored Ape Yacht Club. The four friends were inspired to go with apes as their characters because “aping in” is the term for those who buy new crypto or NFT without considering the risks involved.

The idea of having a club also came from their vision of a congregation place for bored billionaires, who after ‘aping in’ went on to talk numbers and make memes. Thus, a virtual swamp club in a likeness to Florida’s Everglades was born.

This is exactly what comes as a “benefit” of owning a Bored Yacht Ape Club NFT. Bored ape owners, including celebrities, become members and get special privileges such as access to an exclusive Discord server and ‘The Bathroom’, a digital area acting as a collaborative graffiti board.

Club members are also rewarded with free NFTs from the same stables, which can be resold. So, it is like a gated online community of ape owners with special rights. You can even call them members of an exclusive art appreciation society.

The computer-generated 10,000 apes were launched as a collection on 30 April, 2021. Each avatar was priced at USD 200 worth of cryptocurrency Ethereum, and the collection was sold out in a day.

By July, even the cheapest of the Bored Ape avatar was worth around USD 14,000. Each time an ape fetches a high price, the value of all others rises.

As per Crypto Slam, Bored Ape Yacht Club is the fifth most valuable NFT of all time, generating over USD 619 million in sales volume (at the time of writing).

The mutants and the dogs

The Bored Ape Kennel Club introduced dogs to the world of NFTs in June. They were given for free to holders of BAYC NFTs as an advantage of being a member of the club.

“For one week, each and every club member will be able to adopt a Club Dog NFT from the Bored Ape Kennel Club. Claiming the token is free; you’ll only have to pay gas,” BAYC announced at the time, adding, “You can claim one random Club Dog for each Bored Ape you own. Once a dog has been claimed by a Bored Ape, that token cannot be used to claim another canine again.”

The Mutant Ape Yacht Club was remarkably successful, selling out within an hour after the launch for USD 96 million in August. It had 10,000 apes with, as the name suggests, mutations of different degrees.

The bored-looking apes have a dash of wackiness

There are over 170 possible traits generated via a programme. Nearly all apes have bored expressions; the minor variations include grin, rage, angry, dumbfounded or phonemes such as “vuh” and “oh”.

With varying skin tones, including brown-coloured fur, metal skin, leopard patterned and even rainbow fur, their eyes generally have the same blasé expression as the mouth. But one of them stands out for its eyes shooting laser beams and grinning ear-to-ear.

Then there are apes sporting sunglasses and apes smoking cigars, along with those with a pizza dangling from their mouths. While these hipster-like apes appear to be setting a hyper-modernist fashion statement of their own, there are others that look like punk rock stars of an exclusive avatar club.

However, the mutant variants might not seem as appealing as the others to some. Imagine the skin melting away; that kind of thing. Yet, they are some of the most sought-after NFTs.

Rising worth of the ape NFTs

#AuctionUpdate 101 Bored Ape Yacht Club NFTs just sold for $24.4 million and 101 Bored Ape Kennel Club NFTs achieved $1.8 million in our Ape in! auction – the most significant #BAYC sale to date. Congrats to all the apes out there 🐵🐶 pic.twitter.com/e7UghlgtKy

The same month, Christie’s sold four apes along with NFTs by CryptoPunks and Meebits for a combined total of USD 12 million.

On 26 October, Sotheby’s announced that Ape #8817 was sold for USD 3.4 million — the highest ever for a single Bored Ape. The sale was the first for the ape, which is distinguished by its golden fur — a feature found in less than 1 percent of the apes, according to Sotheby’s. Ape #8817 wears a woollen turtleneck, spinner hat and has a party horn pressed between his lips.

#AuctionUpdate #BAYC #8817 sells for a RECORD $3,408,000 USD! This is the first time it has been made available since it was minted. Less than 1% of all Bored Apes have the gold fur trait. From the collection of @j1mmyeth #NativelyDigital pic.twitter.com/HfFTpEOIUh

Among the most famous buyers of Bored Ape NFTs is NBA star Steph Curry, who bought Bored Ape #7990 in August for USD 180,000 and used the zombie-eyed, blue-fur ape dressed in a brown tweed suit as his Twitter profile picture.

Other famous names who own ape NFTs are Dez Bryant, Josh Hart, The Chainsmokers and Jermaine Dupri.

All apes can currently be traded on OpenSea.

What’s next for the apes?

Bored Ape Yacht Club announced on 13 October that they have now signed an agreement with Guy Oseary, renowned talent manager and founder of Maverick. The deal is expected to thrust the apes across media in films, televisions, games and music.

The digital art gained even more popularity when the prestigious Rolling Stone announced that it has partnered with Bored Ape Yacht Club for the magazine’s first-ever digital cover NFT. Two apes, including a mutant, will be featured on the cover complete with the Rolling Stone logo. A total of 2,500 limited-edition offline zines showing the art have been sold out.

In the image on the Rolling Stone zine cover, the bored ape is wearing a yacht captain’s hat and a Hawaiian shirt. There is a cigar pressed between the ape’s lips as it wears its iconic bored expression. The background is made of bananas.

Then there is the first annual ‘Ape Fest’(31 October – 6 November), which will have a series of events to be held across New York City.

The first of the events, Aped NYC, received an overwhelming response. According to a Twitter thread posted by BAYC, there were 700 participants, dubbed “apes”, outside the venue Bright Moments Gallery. This forced the organisers to hand out timed wristbands to better organise the crowd and prevent a shutdown by the police.

We’re handing out placeholder, timed wristbands right now to everyone in line. These wristbands have an hour timeslot on them.

This was followed by a Yacht Party the same day. Other events include Merch Pop-up, Warehouse Party and VIP Charity Dinner.

The BAYC has grand plans for early 2022, chief of which is having its own Ethereum-based crypto-token.

On its Twitter account, the BAYC said, on 9 October, that though launching the ERC-20 token is a matter of minutes, completing regulations and other essential parameters are necessary.

“First things first: It’s stupid easy to launch an ERC-20 token; it takes minutes. It’s much more complicated to construct a legally compliant token and set it up in a responsible, sustainable way,” wrote BAYC.

Not to mention thoughtfully craft dope utility and governance, benefit our club members, and bring the BAYC ecosystem to a much wider audience.

For the sake of our members and the broader NFT community, we want to do this in a sound way.

“Not to mention thoughtfully craft dope utility and governance, benefit our club members, and bring the BAYC ecosystem to a much wider audience. For the sake of our members and the broader NFT community, we want to do this in a sound way,” it added before warning users of scammers.