If you too would like to follow in the footsteps of Emily in Paris, bookmark these filming locations now.

Emily in Paris created quite a buzz when it first rolled out in 2020. Setting enviable fashion goals, the show takes viewers on the journey with Lily Collins’ portrayal of Emily Cooper who arrives in the beautiful city of Paris to provide an American perspective to a luxury marketing firm. Besides the characters’ life and fashion style, the Emily in Paris filming locations also caught global attention as it spectacularly depicts panoramic views of Paris and France.

From Emily’s apartment on the fifth floor in the series, and definitely not on the fourth (like how Emily often got confused), of Place de L’Estrapade Square to the beautiful garden of Jardin du Palais Royal, where she meets her friend Mindy (Ashley Park) for the first time and her Savoir office above Galerie Patrick Fourtin, in Place de Valois, the series celebrates the city and its spirit in the most wonderful way.

Call it overwhelming, magnificent or simply avant-garde, all the Emily in Paris filming locations seem to enhance the protagonist’s character and personality. Watching Swan Lake at the gorgeous Palais Garnier or walking along a glittering Eiffel Tower in the backdrop, Emily lays down an array of things to do while in Paris. And so, the next time you are in the French capital, don’t miss out visiting these beauties.

Living
‘Emily in Paris’ Seasons 3 and 4: Here’s everything we already know

Living
Is Camille the most fashionable character on ‘Emily in Paris’? 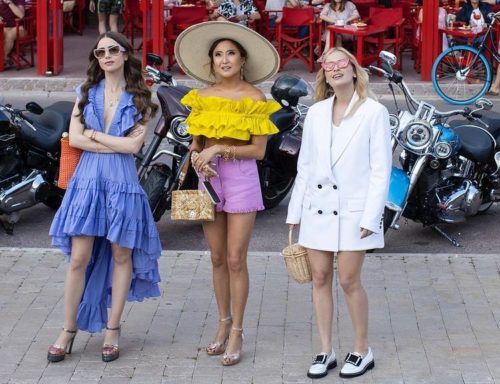 Emily in Paris filming locations for your bucket list

When Emily arrives in Paris from Chicago, she is put up in this old yet elegant building of Place de l’Estrapade in the 5th arrondissement of the historic Latin Quarter. The building may look old, and Emily has to tackle some annoying plumbing issues, but that is in complete contrast to the charming fourth-floor neighbour, chef Gabriel (Lucas Bravo) or the lively atmosphere around the place.

Her Paris apartment is a one-bedroom flat, surrounded by beautiful trees, colourful parks and vibrant restaurants. Boulangerie Moderne, the quaint café where Emily gets her first pain au chocolat and becomes an Instagram influencer after posting its photo, or Gabriel’s restaurant in the series Les Deux Compères, which is a classic Italian restaurant named Terra Nera in reality, are all located in this Latin Quarter neighbourhood. When she is unable to find a table at Le Grand Véfour, this is where she takes her clients for dinner.

In fact, the apartment recently got marked on Google Maps for easy navigation for tourists visiting it.

Located at a stone’s throw distance from the Louvre Museum, Emily’s office is located in this swanky building in the 1st arrondissement. Right from the inception of the series, she is seen working at a marketing firm named Savoir, where she is required to share her ‘American point of view’ as mentioned in the series.

The office is situated right next to Galerie Patrick Fourtin — a lavish gallery with art and furniture items from the 20th century. The square where the Place de Valois is situated is named after Louis Philippe I, the last French King during the 19th-century restoration. A number of high-end restaurants and cafes are situated in this square, such as Grand Hôtel du Palais Royal and Le Bistrot Valois, where Emily goes to dine with her colleagues in the second episode of the first season.

Coming to a new city can be extremely overwhelming for anyone, especially when the language is not known and colleagues don’t leave an opportunity to take jibes. Emily in Paris season one depicts such a predicament of the lead character as she eats her lunch all alone on the park benches of this magnificent monument. This is where she first meets Mindy, and the two immediately strike a beautiful bond. Emily also pushes Mindy to sing in front of everyone at this site.

The Jardin du Palais Royal is a great outdoor place to experience Parisian scenes and sights. The neoclassical structure was built by Cardinal Richelieu in 1633, but mostly pertains to the late 18th century. Louis XIV lived here in the 1640s, and today the Conseil d’État is situated in this building. Its beautiful pathways are lined with hedgerows and flowers with fountains as well.

The Pont Alexandre III is one of the prettiest spots in the city, and Emily in Paris makes sure to capture this bridge which enhances the city’s aura.

In the third episode of season one, this stunning historical bridge over River Seine becomes the filming location for a controversial perfume ad film that Savoir shoots for De L’Heure by Maison Lavaux headed by Antoine Lambert (William Abadie). Emily visits this unmissable spot in the French capital and argues with Antonie that the campaign, which shows a naked model walking on this bridge as handsome suited men stare at her, is extremely “sexist.”

The ornate Pont Alexandre III bridge was constructed between 1896 and 1900 in the Beaux-Arts style and has been labelled as a National Historic monument since 1975. It is easily recognisable by the four gilded gold statues of Fames (the four horses which adorn all four corners of the structure), art nouveau lamps, and golden highlights running along the side of its golden arch.

Rue de l’Abreuvoir is one of the most picturesque streets of Montmartre and is inevitably a noted filming location of Emily in Paris season one. In the fifth episode, Mindy and Emily have a fun-filled night out in Paris as Emily decides to celebrate one last night before ending her social media influencer account. They hit the “prettiest street in Paris” among other locations, and both Emily and Mindy drunkenly hang out after getting drinks at the iconic La Maison Rose restaurant.

After the crazy night, Emily’s boss Sylvie (Philippine Leroy-Beaulieu) also sends her to the same spot to set up the Hasten bed campaign. However, in real life, it is on the other end of the road from the iconic eatery at Place Dalida, which is at the intersection of Rue Girardon and Rue de l’Abreuvoir.

The cobblestone road and the charming restaurant have been the muse for many painters and were frequented by noted people including Pablo Picasso, Suzanne Valadon and her son Maurice Utrillo. Though you may not find a mattress to lie down on like Emily, you may be spoilt for choice with cafes and bistros on the beautiful Parisian street.

The Opera House scene is perhaps one of the most iconic scenes in the sixth episode of the first season. Emily goes to watch Swan Lake with her love interest and philosophy professor Thomas (Julien Floreancig). Dressed in a gorgeous off-shoulder black dress and tiara, Collins looks like a dreamy vision standing on the grand marble staircase of Palais Garnier. This is the same place where she tries to convince Pierre Cadault (Jean-Christophe Bouvet) to work with Savoir again for his upcoming collections.

The Palais Garnier opera house hosts regular ballet and opera performances. The building has a strikingly imposing facade and an equally incredible interior. It was built by architect Charles Garnier at the request of Napoleon III. Besides the staircase, Marc Chagall’s stunning mural on the ceiling of the auditorium is a sight to behold. One can visit this iconic place every day from 10:00 am to 5:00 pm and avail self-guided tours.

Situated in the 11th arrondissement, this popular art gallery is among the most famous Emily in Paris filming locations. In the fifth episode of season one, Gabriel and Camille (Camille Razat) take Emily to this stunning art gallery where they get an immersive experience of Vincent Van Gogh’s The Starry Night. It is a 35-minute long show which uses over 2000 pictures.

The exhibition space depicts detailed art installations using light, sound and videos to breathe life into these incredible paintings. If you are an art enthusiast, you wouldn’t want to miss out on this place besides the Louvre Museum and Musée d’Orsay.

Emily in Paris season two sees the lady from Chicago adapt to Paris and it’s way of life and work even more. In this season, Emily steps out of the glamorous locales of the French capital as her co-worker Luc (Bruno Gouery) takes her to this gorgeous cemetery for her surprise birthday lunch.

Quite an offbeat place, the Père Lachaise cemetery has become a part of the alternative tourist circuit over the years and is the resting place of French stalwarts including Oscar Wilde, Jim Morrison and Edith Piaf. In fact, Luc also takes Emily to the grave of French novelist Honoré de Balzac and explains the philosophy of not continuing to harp on guilt.

By now, it is absolutely clear that Emily in Paris serves endless travel goals, and our travel bucket list keeps increasing with every episode.

Still reeling from her night with Gabriel and coping with her feelings, Emily decides to divert her attention to a handsome Mathieu Cadault (Charles Martins) and in season two, they make plans to visit the quaint seaside town of Saint Tropez in southern France.

However, after an unforeseen turn of events, Emily boards the Orient Express alone and asks her friends to join her. But in reality, the filming location is a town about 120 km east of Saint Tropez named Villefranche-sur-Mer.

The Mediterranean vibe, colourful streets, azure waters and laid-back aura of this place make it not only one of the beautiful filming locations of Emily in Paris but also a must-visit place for anyone on a French holiday.

Emily in Paris season 2 shows Emily and Mathieu embark on a trip to Saint Tropez, but things take an opposite turn when he overhears her conversations with Gabriel. Although her relationship with Mathieu can’t bloom, fans get a gorgeous view of this luxurious hotel where they were supposed to stay.

Emily calls in Mindy and Camille, and they have a wonderful time at the Grand-Hôtel du Cap-Ferrat in Villefranche-sur-Mer. The hotel gives a jaw-dropping view of the Italian cliffs, historic lighthouse and the turquoise Mediterranean Sea, making it one of the most gorgeous filming locations of the series.

Style
The 20 best fashion moments from ‘Emily in Paris’