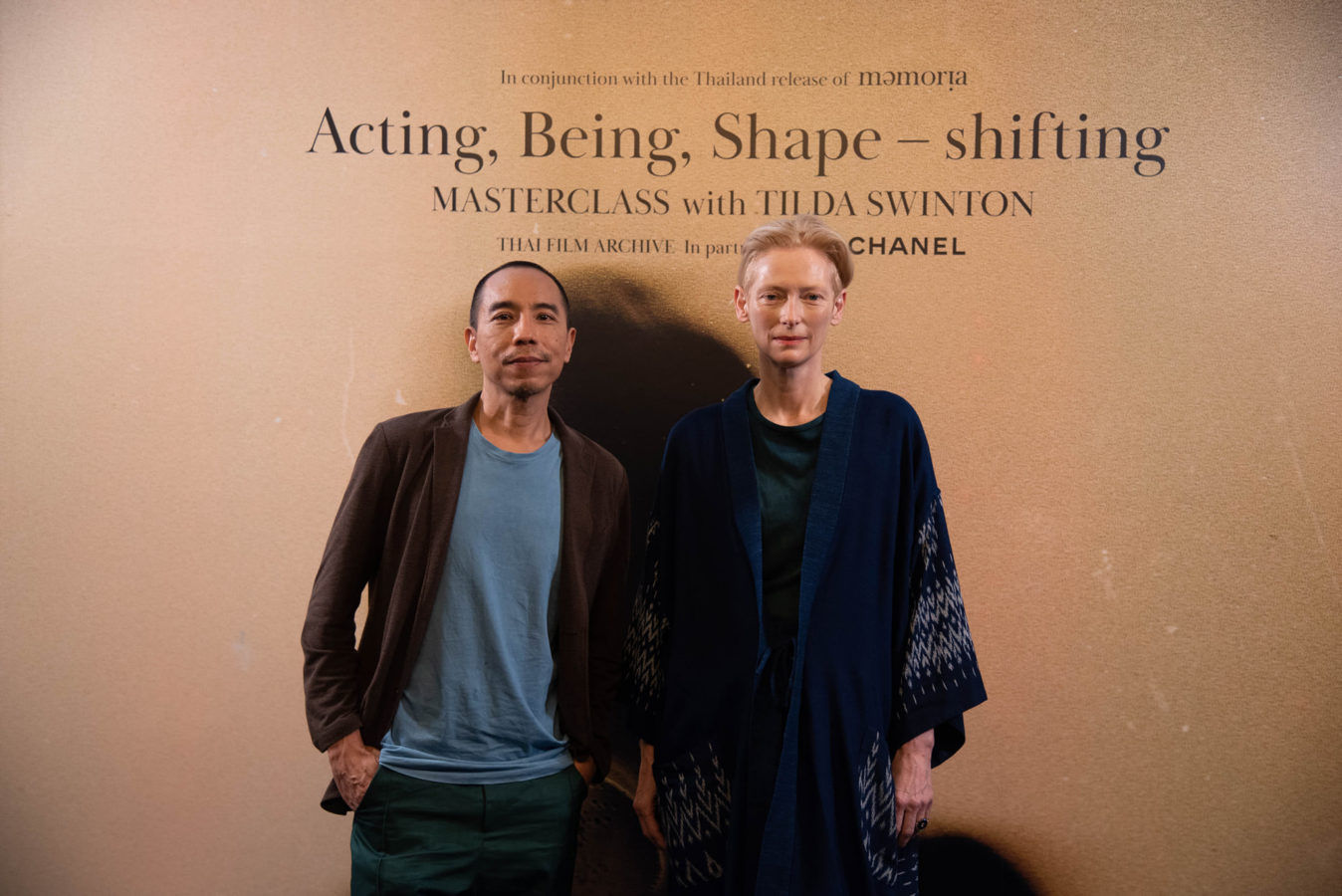 Unless your residence lies under a rock, you probably heard the news about Tilda Swinton being in Bangkok to promote her latest film, Memoria, together with Thai director Apichatpong Weerasethakul last week. On Friday 25 February, the actress, who is also the executive producer on the film, held a masterclass at the Thai Film Archive. Ever the super fans, we attended the event in Salaya with open eyes and ears. Here are our five key takeaways from the talk entitled ‘Acting, Being, Shape-shifting.’

Floating out of the side wings to take the stage in an indigo blue ensemble, Tilda Swinton is exactly how you imagine her to be. Warm, put-together, and wonderfully ethereal, her 2.5-hour talk captured the attention of the room filled with film students, art lovers, and one or two celebrities. The actress who does not believe in acting, described her techniques she would rather not call ‘techniques’, and reminisced over her time with visionary directors, bygone filming cameras, and the undying importance of cinema. Read on for a walk-through of career and motivation, as well as some noteworthy insight from the die-hard film lover.

[All images via Thai Film Archive]

Tilda Swinton’s Bangkok masterclass got off to a rocky start, as the event titled ‘Acting, Being, Shape-shifting,’ opened with a bit of a warning from Tilda herself. “I never was and I still am not interested in acting,” she tells us. She doesn’t identify as an actor, and considers herself a filmmaker, rather, and having an “artist’s life among other artists.”

Starting out as a writer and then later becoming a theatre director during her time at Cambridge University, Tilda only really got into ‘acting’ because of her friends. She never thought of becoming an actor, but gradually fell in love with independent cinema, particularly drawn to the cultural and political element of this phenomenon during the 1980s.

A beautiful example is her work on Edward II (1991, directed by Derek Jarman), which was made in part as a response to the Thatcher government’s Clause 28, prohibiting the “promotion of homosexuality.” Beyond its LGBT subject matter, the film was made in collaboration with OutRage!, a British lesbian and gay rights political group in the UK.

It becomes apparent that ‘acting’ is so much closer to life than sheer mimicry or play-pretend, and that for Tilda, there is an element of message, presence, and real-life portal to the craft. Quoting her character in Friendship’s Death (1987, directed by Peter Wollen), she laughs warmly and says, “mimicry is always sinister.” That’s her take on ‘acting.’

A running theme throughout Tilda’s talk is her love for Super 8 film cameras. From the very beginning of her career she has loved them, and advises everyone in attendance to get one. “You don’t need a lot of money to make a film,” she explains. “You need no money to shoot a Super 8 film.”

Super 8 cameras record without sound, which Tilda describes as allowing you to “feel the material.” The Last of England (1987, directed by Derek Jarman) is a prime example, and Tilda draws upon the infamous wedding dress scene as a reference. For those who haven’t seen the movie, it is a very dramatic moment wherein Tilda sits in her wedding dress and gruesomely cuts and bites herself out of it. The scene was shot on Super 8 cameras, and proves why Tilda loves them so.

There are things you can plan and control, such as the wedding dress and the camera, she explains. And then there are things that are “now or never,” and are absolutely committed to the moment. Cutting and biting herself out of the dress was never intended for the scene, but Tilda strongly believes in going with an idea and allowing everything else to follow. “When you know it’s unrepeatable, it’s a magic spell,” she says.

3. She has a very special take on gender fluidity and ‘being’

The feeling of spontaneity when filming with a Super 8 camera and that “now or never” feeling is one that drives Tilda Swinton, and again, touches on her approach to ‘acting.’

In Orlando (1992, directed by Sally Potter), Tilda plays with the theme of identity as one of the first narratives around gender fluidity. As these words become increasingly relevant in 2022, Tilda speaks of her time preparing for the role in a very natural manner. It’s not really about gender fluidity, but rather constant fluidity and consistency, or a “permanent state of awareness.” The things that change for transgender character Orlando are the dresses, the lighting, and maybe the movement, and yet the “being” of Orlando remains the same.

Shape-shifting as an actor, then, may be about changing clothing, lighting, or even director, but the “love, communication, and complicity is the same,” Tilda explains. In that sense, it’s not so much about ‘acting,’ but about being.

4. Memoria and the beauty of being inarticulate

At this point, the mediators of the talk start to tease Tilda. It’s beginning to sound like she does have some sort of technique, and some definition for ‘acting.’ She laughs, somewhat admitting defeat, but not entirely.

When asked whether she researches her characters, she explains that knowing the shape of the character, the way they move, the lines, and how they fit into the frame is important. However, to Tilda, it is mostly about being relaxed. “Too much technique can be defensive, and a way of not being present.”

Is it not un-relaxing when you don’t speak a foreign language? The mediators probe. When asked about acting in Spanish for Memoria (2021, directed by Apichatpong Weerasethakul), Tilda mentions the beauty of being inarticulate in art. Being fluent is suspicious; there is a beauty in unfinished mess, she says. It is the artist’s predicament: how does the artist convey what is in his or her head in a way that will allow the audience to see it that same way?

For those who have seen Memoria, Tilda says her character Jessica represents a lot of that predicament. “She is an antennae to the audience.” It’s a good line to keep in mind as you watch.

We move into the last 30 minutes of the session on a lighter note. A photograph of Tilda Swinton’s mobile cinema graces the screen above her, and she gets up to analyse the picture.

Back in 2009, Tilda Swinton held her own kind of film festival, in her very own way. With a travelling mobile cinema, she visited villages across the Scottish Highlands, playing films at different locations every night. The photograph on the screen shows Tilda pulling the cinema screen lorry with a joyful team using tug-of-war ropes. It is a sight to behold.

The artist’s big love for the cinema becomes eminent, and her love for film even more so. “Streaming is not an event,” she says. Cinema reinvigorates the idea of ‘an event,’ of sensationalism, and the specific and inclusive use of the cinema. During the pandemic, we all did a lot of streaming, she says, “but what did we really miss? Friends, family, live music, and cinema.”

Watching Memoria, or any film in fact, is a completely different experience in the cinema than it is on a television. Watching Tilda Swinton host this masterclass in Bangkok was a full sensation in itself. The filmmaker ends her talk with the motto from a place very dear to her, the British Film Institute. As she gets up and looks around the room, she exclaims, “film forever.”

Memoria will be released in Thai cinemas on 3 March 2022.

Film People Entertainment Tilda Swinton Thai Film Archive Apitchatpong Weerasethakul
You might also like ...
Travel
An itinerary for Tilda Swinton in Bangkok, based on her best movies
Living
Apichatpong Weerasethakul at Cannes 2021: 6 facts about the award-winning Thai director
Culture
9 Asian movies to look out for at 2021 Cannes Film Festival
Culture
2022 Oscar nominations: ‘The Power of the Dog’ leads with 12 nods, Japanese film makes history
Lisa Gries
Creative Content Director, Bangkok
Lisa loves to travel, and is always on the lookout for the world’s best nap spots. She’s a serious Asian art history nerd, and has a knack for languages and coffee table books. She hopes to publish her own novels one day, one of which will likely be called ‘All The Great Conversations I Had In A Bangkok Speakeasy.’ It’s a work in progress.
Travel Drinks Dining Watches
Sign up for our newsletters to have the latest stories delivered straight to your inbox every week.