Home > Living > Film & TV > What would ‘Indian Matchmaking’ look like if it took place in Thailand?

What would ‘Indian Matchmaking’ look like if it took place in Thailand?

There are many things that are problematic about Indian Matchmaking season 2. Let’s make it even more problematic by imagining what the Netflix hit show would look like if it took place in Thailand.

The show everybody loves to hate-watch is back. Netflix released the second season to Indian Matchmaking this month, and many of us used our work-from-home days to binge-watch the entire thing. Sima Taparia, the notorious matchmaker from Mumbai, is back this season to match up singles looking for love both in India and the United States.

Whilst there is a lot to be said about the cultural representation and societal pressures enforced on the show, we couldn’t help but wonder: if this show took place in Thailand, what would it look like?

Living
What would happen if ‘Inventing Anna’ took place in Bangkok?

After all, there are quite a few similarities here. We also believe in curses, and the importance of horoscopes, as well as the impact of overbearing parents. We also know it’s hard to find love in Thailand, especially when you’re young, successful, and have a long list of requirements. Thereby, if Sima Taparia from Mumbai did take her skills over to Thailand, what would that look like?

Read on and feed your imagination — and take the following with a grain of salt. Preferably on the rim of a cocktail glass. Likely with a lot of tequila. You’re going to need a drink after this.

Bangkokians are so proud to be Bangkokians. Sounds familiar, Sima-who-has-to-name-her-city-anywhere-she-enters.

Instead of sharing biodatas, Sima would share IG accounts

We take our Instagram seriously here. Sima would present parents and singles with the IG account of the matches she has found. She’d also ask participants to compromise if the follower count wasn’t that high, or the overall grid didn’t have a colour scheme. “Everything is not possible. A person doesn’t get everything.”

Similarly, one of the key requirements would be: “Knows how to take good Instagram photos”

This is very important to us here. Nobody wants to date — let alone marry — somebody who is not good for content. Who will take photos of us enjoying a meal at the hottest new opening in town? Exactly.

Instead of a chicken business, Akshay would have a thriving durian farm

He’d export his precious fruit to China and make bank.

All the participants would be really into IF

Viral Joshi is lacto-ovo-semi vegetarian. Just like her, a lot of Bangkokians live for very particular diets, too. One of the most popular in recent years is intermittent fasting, or as all the cool cats abbreviate it: IF.

They’d probably pay for it, too. Following the wedding, they’d also book an exclusive open-house feature, and explain why on earth they stick a picture of themselves on their apartment door.

Parents would describe the ideal man as looking like Bird Thongchai

On Episode 5, one of the fathers says that the ideal man would look like Clint Eastwood. In Thailand, our parents would probably secretly wish we could get someone who looks as good as Bird Thongchai.

Ice-skating is cute and romantic and all, but for the Thai edition, it’s likely Arshneel and Rinkle would go paddle-boarding in Samui for their date. It’s where we like to head during the cooler seasons, and it’s as outdoorsy as we’ll go.

Vinesh would seek out someone who is really into plaa raa

We pretty much barfed when Vinesh said he wanted a “traditional” Indian girl who makes pakoras like his mother. Whilst this was off-putting in many ways, we can acknowledge that liking the same foods can be beneficial in a relationship. If Indian Matchmaking season 2 took place in Thailand, perhaps he’d seek out someone who doesn’t mind eating pla raa, enjoys the occasional 7/11 microwaveable sandwich, or agrees with the fact that khao soi is definitely not a soup. 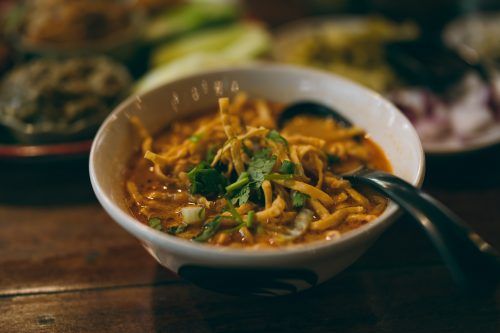 Just like on the show, there would hardly be any successful matches through Sima

The truth is, the couples would end up meeting through mutual friends. They probably studied in the same faculty. Or go to the same speakeasies. Or met at a creative agency that one time for a project. Sima’s efforts would end up being pretty useless.

And lastly, the entire show would be just as problematic

Entertainment Relationships Film & TV Indian Matchmaking
You might also like ...
Living
30 thoughts we had while watching ‘Inventing Anna’ on Netflix

Living
‘Midnight Asia’: 16 thoughts we had while watching the Bangkok episode on Netflix

Lisa is the Creative Content Director at Lifestyle Asia Thailand. When she’s not knees-deep in web algorithms, editorial calendars, or traffic-driving strategies, you’ll likely find her in downward-facing dog at the yoga studio, or immersed in conversation at a secret bar in China town. Lisa writes mostly on dining, travel, and pop-culture, and is a huge fan of soup dumplings, Riesling, and power napping — in exactly that order.