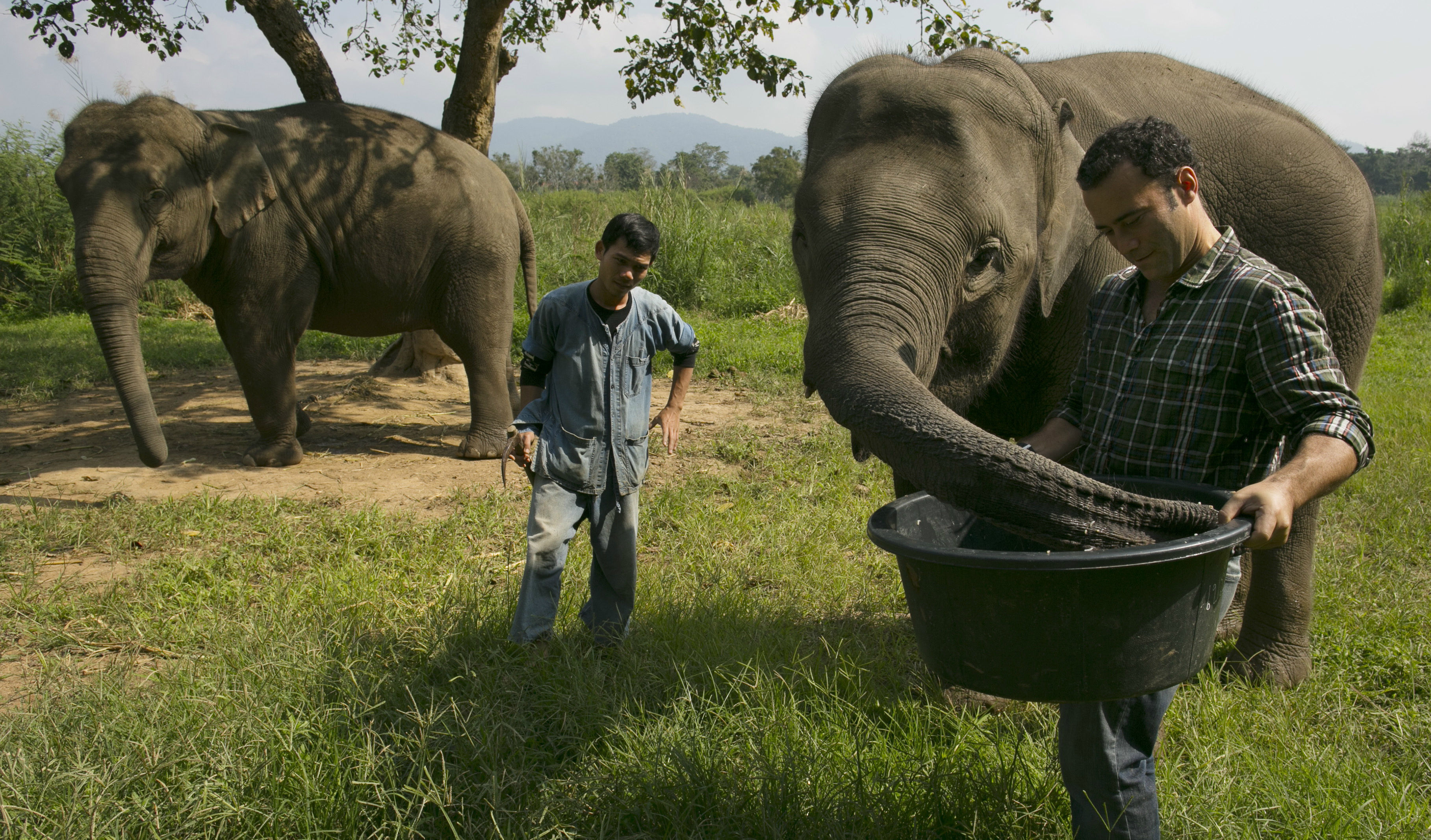 A moment with… Blake Dinkin of Black Ivory Coffee

Just when you think you’ve tried everything from the gigantic gourmet coffee menus now available, up comes an invitation to interview Blake Dinkin, whose Black Ivory Coffee is one of the rarest and most expensive coffees in the market today, with a distinctly different sort of brew.

Made from Thai Arabica beans, and picked at an altitude of 1,500 metres-plus, Black Ivory Coffee is delicately brewed in an exotic siphon and served in only the finest porcelain espresso cup. But that’s only the half of it. Way before the brewing takes place, those same coffee beans have been consumed by a much larger being than you – an elephant – before being excreted and picked out of the dung! Only then it is roasted and brewed for you. Could this be the start of a new way of sharing or recycling?

Blake Dinkin, the man behind Black Ivory Coffee, informally known as elephant dung coffee for obvious reasons, has been channeling his creativity and passion into business, and his hard work is paying off. Since its launch in 2012, Black Ivory Coffee has been rising to fame, and quickly snapped up by those with an insatiable appetite for all things novel or hard to swallow. 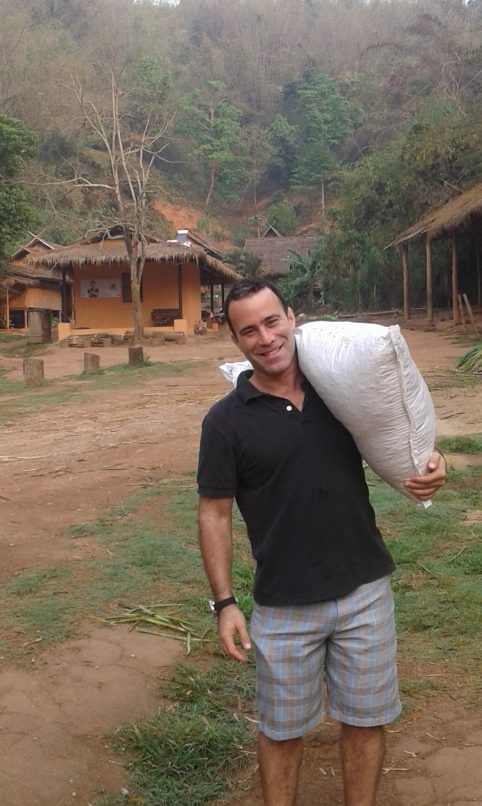 Born and raised in Canada, Blake is a funny and down-to-earth sort of guy, who has been currently living in Thailand for four and a half years. And guess what? Blake did not enter the coffee business as a coffee lover, but he sure does love a good story!

What was the inspiration behind Black Ivory Coffee?
I wanted to do something creative, international, and something that would make a positive impact. At my former job, I’d read about Kopi Luwak, then ended up moving to Ethiopia and met the first person in the world who commercialized that brand. With all the difficulty I had working with civets and farmers in Ethiopia, I thought there had to be a better way in terms of ethics and disease, so I looked at all kinds of animals, from hippos and rhinos to giraffes, and I finally came up with the ideal option while working with a food scientist on elephants.

Have you always been a fan of coffee?
When I was working with the civets, I wasn’t much of a coffee lover, but I do love a good story and Ethiopia is the birthplace of coffee. I really appreciate the history, the impact it has on the culture and the story of how it spread around the world. I became so into coffee to the point that after a year of living in Ethiopia, I started to have lines of fine coffee grains on my front teeth. I know that’s really disgusting to look at, but that’s how much I drank coffee and now I have a real appreciation for it. 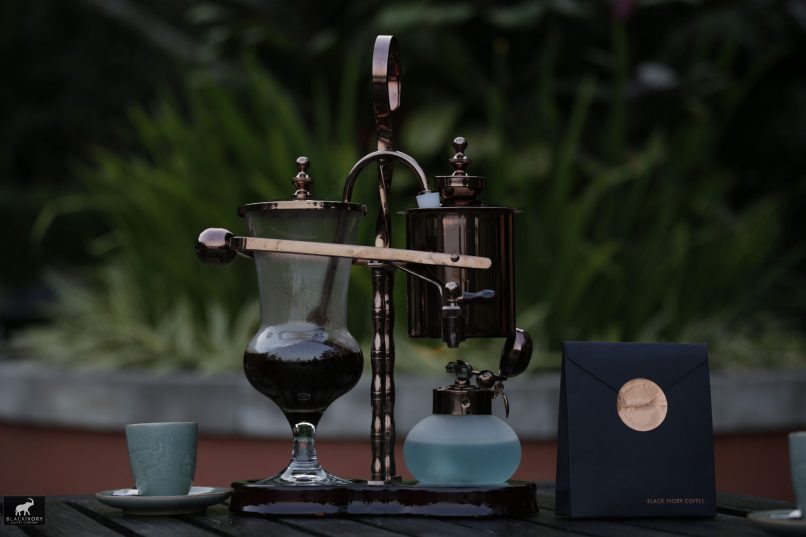 Why Thailand?
My options were limited. It had to be a country that had both elephants and coffee. I was working in Indonesia and I was advised by a vet working with elephants to consider Thailand. I also wanted to work in a place that was safe. Thailand, where coffee is not as popular, has a long and amazing history with elephants, which really appealed to me. After looking through 35 elephant sanctuaries in Southeast Asia, I ended up working with the Golden Triangle Asian Elephant Foundation which was perfect because I also wanted to make a positive social impact.

When you first started, you must have been mocked or criticised. How did you get through all that?
I didn’t take it as criticism or mocking, I took it as a bit of a joke really. When you come up with something new there will always be some naysayers in the mix, but I didn’t have a problem with that because I believed in what I did. I also have a sense of humour, so I just laugh when people tell me I’ve become a dung picker. I love what I do. I see the value as both social and economic. The proof is in the fact that my product is now served in top five-star hotels, such as W Retreat Samui Thailand, PER AQUUM Niyama in Maldives and Avani Sepang Goldcoast Resort Malaysia. To me, this is a real stamp of approval.

What has been your proudest moment since starting Black Ivory Coffee?
I can’t think of any particular moment. I’m proud of what we’ve accomplished so far, but I do think there is still a long way to go.  As a foreigner working in Thailand, I still have to overcome the cultural and language barriers, and – just like for any other business – continue to build on our product and standards. 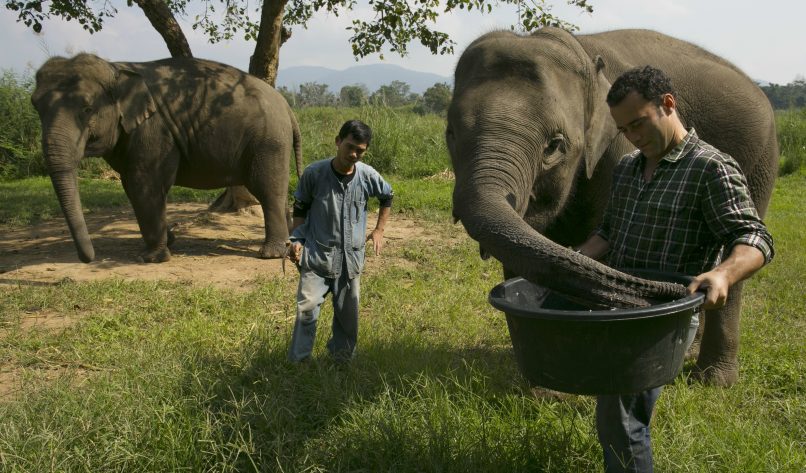 You are also involved in charity work. How’s that going?
Black Ivory Coffee has been supporting The Golden Triangle Asian Elephant Foundation. Now I’m expanding to a village called Baan Ta Khla in Surin, where 200 elephants are located. It is also the birthplace for all the elephants’ mahouts. It’s challenging because the area is very poor. I will be giving part of my profits to the schools, attended by the mahouts’ children.

Interview People Coffee Q&A Interviews Scene Blake Dinkin Black Ivory Coffee
Ploylada Sirachadapong
Sign up for our newsletters to have the latest stories delivered straight to your inbox every week.

About Harmony Tan, the French tennis player who defeated Serena Williams at Wimbledon 2022

21 Oscar winners that have appeared in Marvel Cinematic Universe films