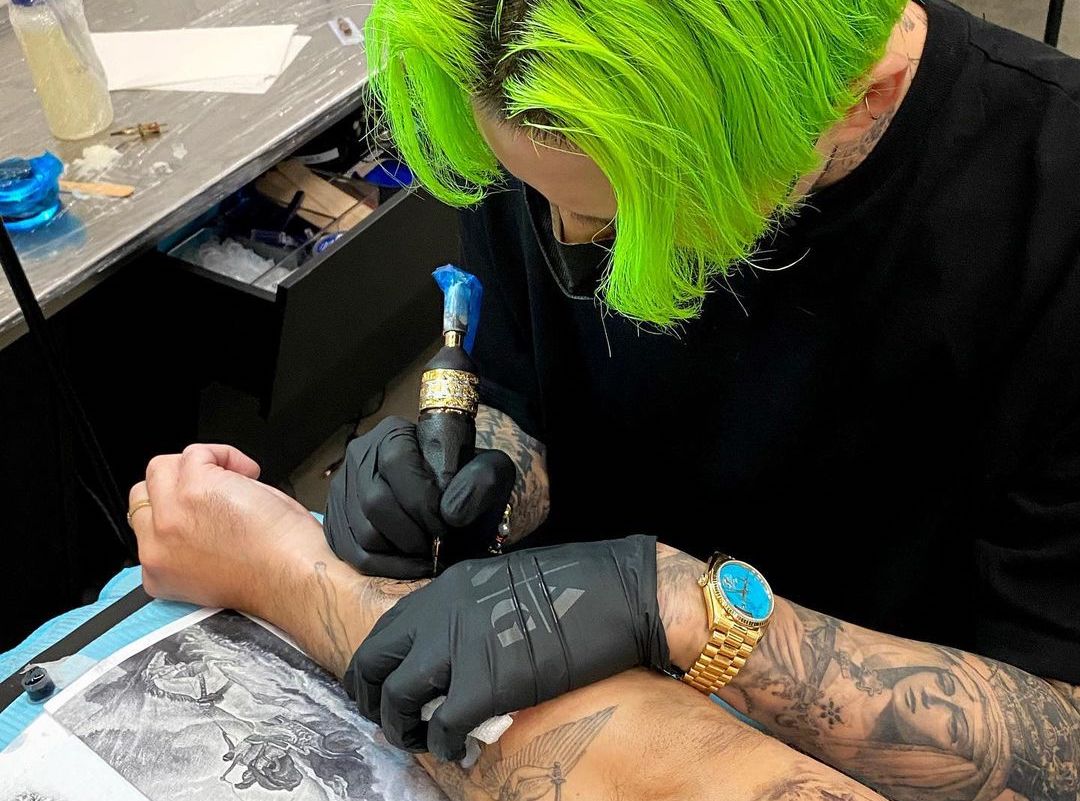 9 celebrity tattoo artists who have inked it big

Inking has long been used as a form of artistic expression. From navigating thorny societal quandaries to being an integral part of popular culture – a celebrated way of self expression and artistry throughout the world, tattoos have come a long way since the 20th century. Celebrities have played a massive role in de-stigmatising tattoos and portraying them as a form of art and a proxy for being perceived as ‘cool’. Who are the celebrity tattoo artists making waves?

Tattoo art is the flagbearer of contemporary self-expression with a piece of history that breathes life into the very skin of the person who is inked. A tattoo can represent anything you want — a rebellion, a beacon of hope, a reminder to yourself, a call to action or anything you are comfortable getting on your skin permanently.

For tattoo artists, having a famous celebrity display their handiwork and inadvertently remaining open to mass critique, is certainly not an easy task. However, talented tattoo artists like Kat Von D, Keith ‘Bang Bang’ McCurdy and Paul Booth have made a mark for themselves.

Thanks to the increasing popularity of tattooing among the rich and the famous, tattoo artists are now building a lucrative and fulfilling career within the entertainment industry.

9 celebrity tattoo artists who have inked it big

Keith ‘Bang Bang’ McCurdy, a New York-based tattoo artist, rose to fame when the opportunity to ink a Sanskrit hymn on the 18-year-old rising star and singer Rihanna fell into his lap back in 2007. With humble beginnings, trying to make ends meet from his mother’s tiny apartment in Delaware, USA, the ink master worked his way up to become one of the most sought-after celebrity tattoo artists.

Keith has since inked the likes of Justin Bieber, Katy Perry, Rita Ora, Cara Delevingne and other famous celebrities who have proudly flaunted his inkwork on red carpets, coveted award shows and magazine covers.

Prices start from US$600 per session, but Keith’s NYC studio charges its customers depending on the size, shape, design and location of the tattoo. His net worth now stands at an astounding US$5 million, thanks to his artistic vision, beautiful designs and a will to hustle his way to the top.

Originally from Seoul, tattoo artist Mr. K might’ve studied at Parsons School of Design and began his career as a graphic and streetwear designer, but it wasn’t until he began tattooing when he found his true calling. Little wonder then, that the South Korean is now based out of Keith’s Bang Bang Tattoo Studio, and has since made a name for himself with his intricate micro-style and single-needle works in black and gray.

His clientele rival Keith’s too, and includes the likes of David Beckham, Rita Ora, Liam Hemsworth, and Odell Beckham, as well as Michael J. Fox, who entrusted his first tattoo with him at 57.

Born in 1982, celebrity tattoo artist, makeup mogul and entrepreneur, Katherine Von Drachenberg, aka Kat Von D, dropped out of high school and began tattooing at the tender age of 16. Kat was born in a conservative family of church missionaries in Mexico, who moved to Loma Linda, California, when she was 6 years old.

Inspired and driven by her love for music, art and makeup, Kat Von D decided to invest her time fully in the path of tattoo artistry. She is now a big name in Hollywood and the beauty industry. Credit for this goes to her wildly popular 2007 reality TV show, LA Ink, her exclusive and waiting-list driven tattoo studio, High Voltage Tattoo, her makeup empire and her controversial tête-à-têtes with other famous celebrities and YouTube personalities.

Kat Von D has displayed her stunning handiwork on celebrities like Beyoncé, Miley Cyrus, Demi Lovato, Margaret Cho, and Eve. With a net worth of a whopping USD 20 million, Kat’s tattoo studio charges USD 200 on a per-hour basis for basic tattoo designs. She is said to have stopped accepting tattoo requests owing to the overflowing list of clients already on her wait-list.

Dubbed the ‘founding father’ of black and grey ink art, Irish-Catholic ink master, Mark Mahoney is one of the most influential and respected celebrity tattoo artists in the world. Born in Boston, Massachusetts, Mahoney began his career as a tattoo artist back in 1977, during which he primarily used to (illegally) tattoo gangsters, bikers and outlaws, the target customers for tattooing back in the day. He is the owner of one of the most iconic tattoo shops in Hollywood, Shamrock Social Club, housing a group of talented tattooers and artists.

With a career spanning over 40 years, California-based Mark Mahoney has inked massive names like The Notorious B I G and Tupac Shakur, along with Hollywood biggies such as Angelina Jolie, Johnny Depp, Rihanna, Jared Leto, David Beckham and Adele. He is often seen at his West Hollywood tattoo studio shop working his magic on high-profile clients.

Owing to his legendary and iconic inking skills and gorgeously personalised monochromatic tattoo designs, he has amassed a fortune of US$6 million till now. Mark charges USD 500 – USD 1000 per hour for his time and work.

The reigning king of teeny tiny tattoo designs and former youth pastor, Jonathan ‘JonBoy’ Valena is one of the most in-demand tattoo artists in the USA. The New York based tattoo artist’s career propelled forward to achieve an ‘overnight’ fame because of a tiny tattoo he drew on supermodel and fellow-church-goer Hailey Baldwin-Bieber, back in 2015.

With his own tattoo shop on the second floor of Moxy Times Square hotel, Jon Boy’s portfolio boasts over 20,000 happy and loyal customers he has garnered over the years. Apart from the life-changing tattoo he created for Hailey Bieber, he has etched his signature discrete yet compelling art on the likes of Kendall Jenner, Justin Bieber, Zayn Malik, Chloë Grace Moretz and Sofia Richie.

His delicately feminine and nearly invisible tattoo art style has been a go-to for models and actresses who wish to get tattoos without modifying their camera-ready physical appearance.

Valena demands USD 1000 to USD 3500 from his clientele for his fine-line, delicate and inconspicuous handiwork. His net worth stands at a formidable USD 1.5 million.

Hollywood-based tattoo artist, Brian Woo (a.k.a ‘Dr. Woo’), was raised by hard working immigrant parents in a conventional, strict household in Los Angeles, California, USA. Originally wanting to pursue a career in fashion, he was steered in a different creative direction, thanks to a golden opportunity to do an apprenticeship under his mentor, Mark Mahoney, at the latter’s legendary tattoo shop Shamrock Social Club.

At Shamrock, Dr. Woo polished his signature black-and-grey craft using single-needle fine lines. This soon led to famous celebrities flocking to him on Sunset Boulevard to get inked. Eventually, Brian was flooded with so many tattoo requests that he decided to start his own tattoo shop called the Hideaway at Suite X inside the Hollywood Roosevelt Hotel to cater to the growing demand.

Lauded for his realistic tattoos and keen attention to detail, Brain’s portfolio includes massive names such as Miley Cyrus, Demi Lovato, Hailey Bieber, Ellie Goulding, Drake, Zoë Kravitz, Kendall Jenner, Harry Styles, Cara Delevingne and Chiara Ferragni. Along with these, non-celebrity clients are found chilling in a two-year-long wait-list, dying to get inked by him.

Woo is slowly emerging in the fashion and beauty industry as well, boasting collaborations with brands like Converse, Sacai, Nyden and Thierry Lasry. Along with launching his own skin-care brand, Woo Skincare, in 2020, he is also spotted in the guest lists of exclusive fashion weeks and designer shows.

With an ability to perfectly clone complex reference images on the skin with ink, Woo charges something around US$200 up to thousands of dollars depending on the nature and intricacy of the tattoo. He stands at a net worth of US$1.5 million.

Born in 1953, Jonathan Shaw is a name synonymous with bringing about a pioneering and cultural shift in the world of alternative body art, tattoos and literature. In 1976, Shaw founded the oldest tattoo shop in New York City, Fun City Tattoo Studios, on St. Marks Place and MacDougal Street back when tattoos were still illegal.

Navigating through life as not just a tattooer, but a profound storyteller, artist and writer, Jonathan retired and settled down somewhere in the Brazilian abyss of Rio de Janeiro in the early 2000s. He was also the first tattoo artist to be invited as a guest on the popular TV talk show, The Tonight Show with David Letterman.

Jonathan has inked famous celebrities such as Johnny Depp, The Cure, The Velvet Underground, The Ramones, Marilyn Manson, Jim Jarmusch, Joe Coleman, Kate Moss, Orlando Bloom and Tupac Shakur. Owing to his artistic talent, high-profile clientele and stellar reputation as a tattoo industry veteran, Shaw has earned a net worth of US$3 million.

Born in 1977, New York based Scott Campbell is one of the best tattoo artists in America and beyond. He began his career in body art in San Francisco, California. Campbell has inked clients from all over the world, while travelling across Asia and Europe which made him rise to fame.

In 2005, he launched his own tattoo shop in New York which eventually led him to doing tattoos for film stars such as Robert Downey Jr. Orlando Bloom, Heath Ledger, Helena Christensen, Courtney Love, and the legendary designer Marc Jacobs.

With tattoo studios in both California and New York, Scott begins with charging his clients US$2,000 per hour, and subsequently adds US$200 to each hour once it crosses the one-hour mark. Scott’s net worth stands at US$1 million.

We couldn’t end the list without giving the Oscar-nominated actress, Margot Robbie, an honourable mention, since she moonlights as a tattoo artist. Robbie has famously inked her co-stars in Justice League and Suicide Squad. She also appeared on the Graham Norton Show in 2017, where she tattooed one of the production staff members on camera.

Robbie began tattooing her friends and co-stars as a far-fetched hobby, which was a result of impulse-buying a tattoo gun on eBay back in 2016.

Even though she is not a licensed tattooer, almost 50 people humoured her and allowed her to tattoo them, before she completely gave up the pursuit of this hobby.

People Celebrities Rihanna Tattoos
You might also like ...
Living
Spotted: Celebrities wearing Chanel at the ‘Memoria’ premiere in Phuket
Beauty & Grooming
The biggest Korean hair trends of 2022, according to a Korean celebrity hairstylist
Living
How celebrities celebrate Christmas (the Kardashians, Beckhams, and more)
Living
Relishing the green way: 10 celebrities who are vegan or plant-based
Eesha Kulkarni
Eesha is a passionate digital nomad with a master’s degree in architecture and industrial design from Politecnico di Milano, Italy. A jack of all trades who enjoys writing art, architecture, travel and lifestyle features, she is found petting dogs, taking walks in nature and sniffing books in her free time.
Entertainment Culture Travel Lifestyle
Sign up for our newsletters to have the latest stories delivered straight to your inbox every week.