After building a career as a Chef de Partie at Blue Hill At Stone Barns (currently ranked 12th on the World’s 50 best restaurants list) in New York, being an intern at Gaggan, a Kitchen Volunteer at The James Beard Foundation, and the Lead Line Cook at Water Library Hospitality Group, chef Chudaree “Tam” Debhakam returned to Thailand and made a name for herself in Thailand’s culinary scene. She is a masterful, humble, and influential chef who was also the very first winner of the culinary battle TV show, Top Chef Thailand at the age of 24.

Between doing all that, chef Tam has been continuously following her farm-to-table philosophy, bringing hyper-seasonal cooking back to the heart of Bangkok. Cooking to the highest standards of sustainability, chef Tam promotes modern Thai cooking by using local, seasonal, and organic ingredients.

While she was doing a pop-up event called Chef Nanang X Chef Tam: Bridging Cultures Through Food at 137 Pillars Suites & Residences Bangkok, further spreading her gospel of farm-to-table cooking, we got to sit down and chat with her in a food-centric talk. Read all about her insights and thoughts in this full and exclusive interview with this rather charming (and pretty!) chef.

How would you describe your style of cooking?

Cooking for me is emotional. So, my style of cooking depends on my emotions and how I feel at the time. Also, I rely a lot on local ingredients so my style also depends on what produce is available during each season and what the farmers and producers I’m working with grow. There’s not one single style or a type of dish that I cook all the time because it changes according to the seasons and my mood. 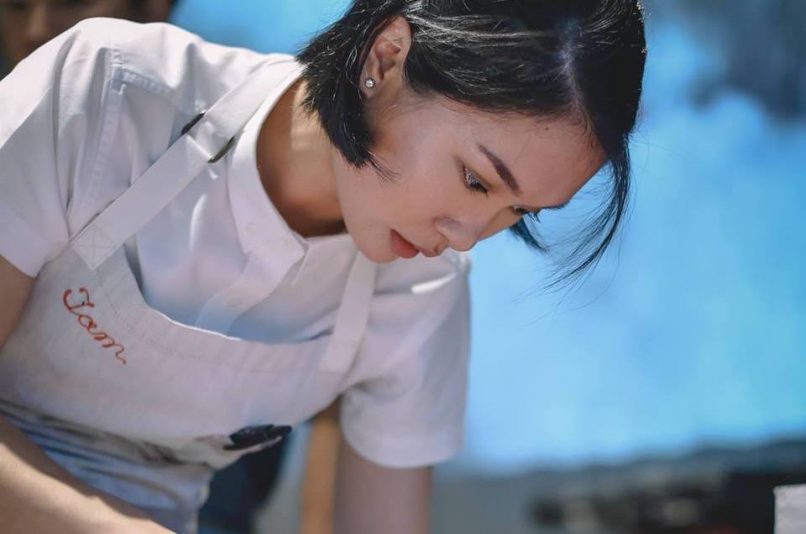 Where did this inspiration for creative farm-driven cuisine come from? And what does it mean to you?

It definitely came from my cooking experiences and my love for farm-driven cuisine. I used to work at Blue Hill At Stone Barns in New York for two years and the experience I gained from there really blew my mind. I mean the work there was intense. Working at the farm early in the morning and working full-time in the kitchen afterwards. There were a lot of young farmers working there as well, so my perspectives on farming completely changed. In Thailand, farmers are not really viewed as modern, hip and cool, but all the farmers there graduated from Columbia University and such. Just really well-educated, smart farmers, and I was really inspired by their outlooks and passion to turn farming into something that is an occupation that young people can be attracted to. And I was certainly attracted to it. It felt nice to be in touch with nature. So that experience to me really lit something inside that wanted me to cook this way and wanted me to learn more about farming and local produce.

What kind of stories are you telling through your food?

I tell my side of the story but it’s really from the experience that I’ve gained. From either meeting with the producers or eating somewhere. For me, it’s all about food memories and experiences. Food is a great means of communicating and story-telling. For the last pop-up that I did, we did some very cool stuff with bamboo because the forest that we went foraging at was like a bamboo forest, so we used it in the presentation of the food and when the guests arrived they saw a lot of bamboo on their table. The soup was even served in a bamboo bowl. So really, I’m telling my experience through food. 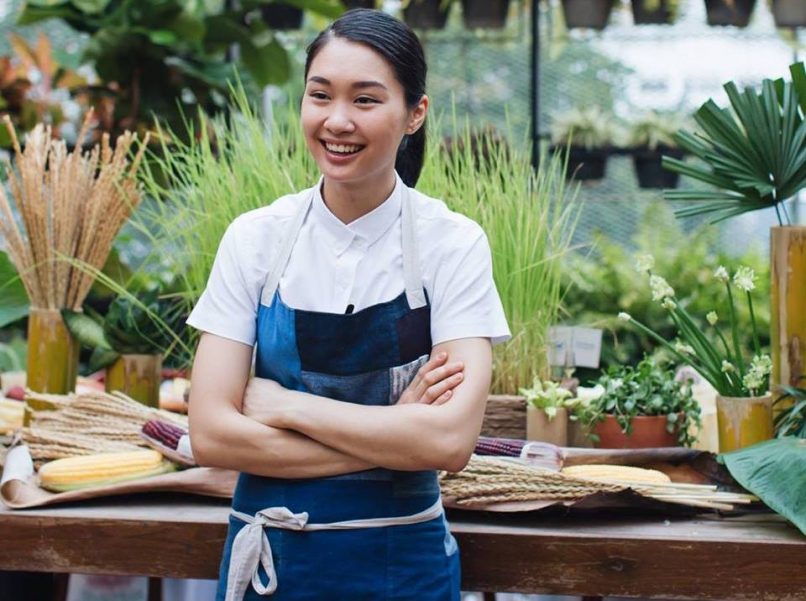 What was the meal that inspired you to become a chef?

There are so many meals that inspired me. They didn’t make me feel like “Oh I need to become a chef.” All the great meals I had were more like an affirmation that this occupation is for me. I had this one meal in San Francisco, California, and I remember that it was just so great. It was not the meal actually that inspired me, it was the bathroom. It just made me realise truly what it means to be in a nice restaurant. A bunch of restaurants I went to in Barcelona also really inspired me. The food served there was always simple, like bread and tomatoes. But the tomatoes were treated so well and the bread was just so good. Simple stuff like that just made me realise that cooking is really in the details and it just made me want to explore more. 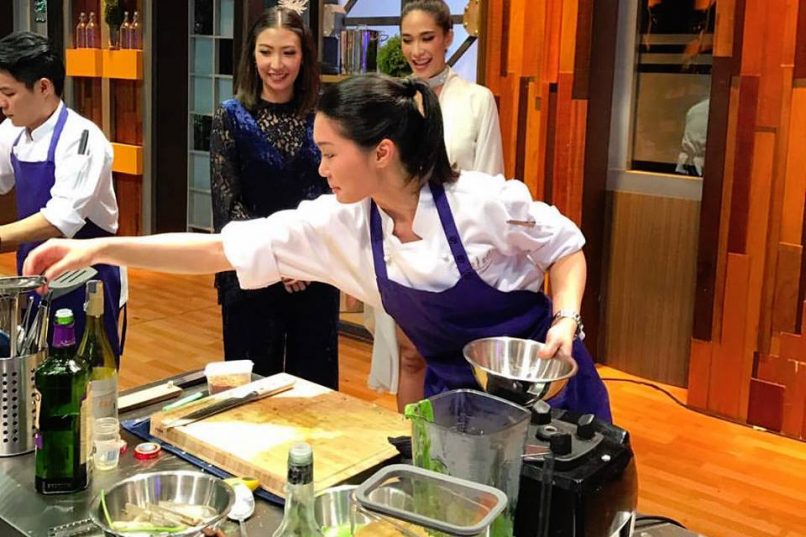 What was it like working for Dan Barber at the Blue Hill restaurant in New York?

It was a lot of fun but there was also a lot of pressure. So many times, I would feel like breaking down. I went in as the most junior position there was. I was trying to prove myself. I tried to be really quick and get as much interaction with Dan as possible. I wanted to learn so much. Then I realised that I was there to perform and do it really well. So I started to really focus on my part of the kitchen. They started by giving me three tasks a day and then it became five. Once you got to five then it became six or seven. So I really had to push myself in order to move up the ranks and I really, really tried hard. I worked at four stations, so at the end I was very pleased with that.

What was your most memorable moment during Top Chef Thailand?

I thought Blue Hill At Stone Barns was intense. But Top Chef Thailand was even more so. I was subjected to a different kind of pressure. Before that I had never been in any cooking competitions. I mean I used to do sport, but that was as far as competition goes. And it just didn’t occur to me how intense it would be to do something you love but to do it perfectly and do it really quickly. I had to think of a completely new dish cooked with four ingredients. But the most memorable thing for me about the show would be the people that competed. I’m still friends with all of them and I think it was just a great experience to go and meet with people in the same industry who love food as much as I do. 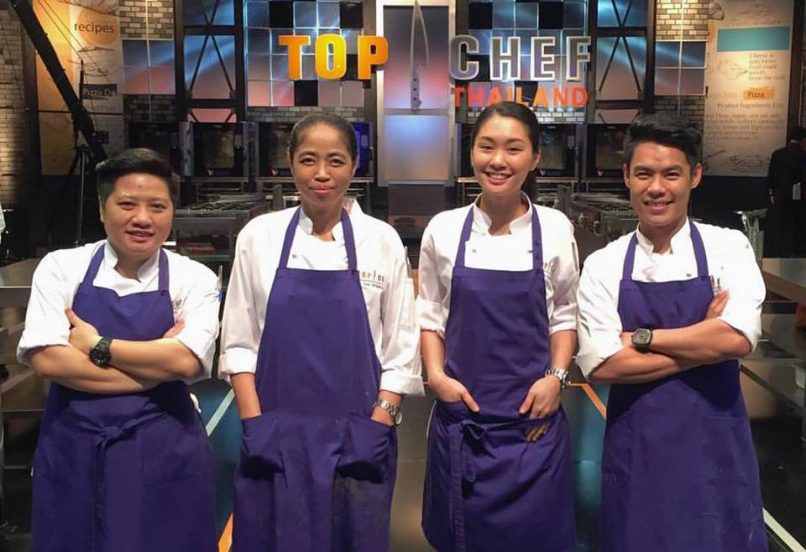 People know you for your calmness. How do you usually cope with problems occurring in the kitchen?

I just hold it in. I’m not always calm on the inside [laughs]. I’m someone who will panic way ahead of time so that’s why I seem calm, but before that I already panic. So I do panic. I just don’t panic for other people to see. I just don’t like to project it to the people.

Do you find it challenging to constantly create?

Before, I never looked at it as a problem. But now, because of my hectic schedule, I don’t have enough time to diddle daddle with all my new ideas. So the creativity just sort of switched off which is sad but now I am trying to balance my time a little better so that I could have creative moments for myself. When I’m on my laptop doing recipes sometimes that counts as resting and being creative for me. So I try to set a time for myself more and have some me time. 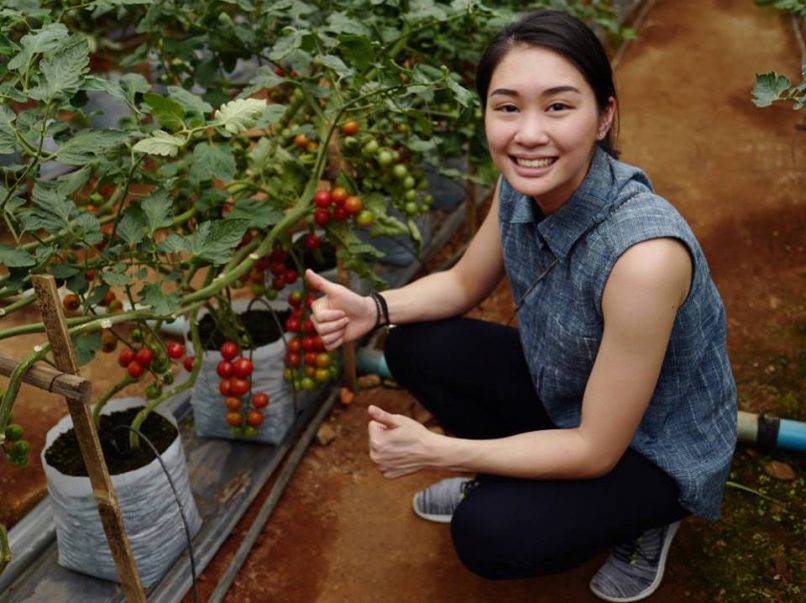 Throughout your culinary journey, what are your three best dishes?

1. Salted Duck Egg Chili Relish – It’s actually from my grandmother’s recipe that I sort of tweaked to a different form of Thai relish. Because in Thai cuisine, it is just seen as a condiment that you dip with. I wanted to make it a star so I turned it into a dish. It’s a salted duck egg relish with a custard-like texture and with seasonal vegetables and prawns.

2. Stuffed Squid – The dish was inspired from a dish I had at this restaurant in Hua Hin. It was this sort of stir-fried squid with its ink and loads of garlic. It was super juicy and squid-y. A sort of dish that is very messy. I just loved it. So I knew I had to do that dish. I just made it with minced pork and Thai anchovies, the salted mackerel. So I stuffed the squid and made the sauce with the squid ink and it was super spicy and garlicky, served with Thai-style rice. There was a lot going on in that dish so one bite just blew my mind.

Any tips for aspiring chefs?

Do it. This job is really physically demanding. If you want to be a cook? Do it. Try it. Don’t hesitate. Being a chef will teach you a lot about life and about yourself. You’ll see how far you can push your limits. It will test you and your discipline, and see if you can handle pressure and get up every morning and do it. You need to try it to know if it’s for you. It’s something that is tormenting but at the same time so enjoyable. I’m talking about this from a cook’s perspective. If you love to cook, then you should really give it a try. 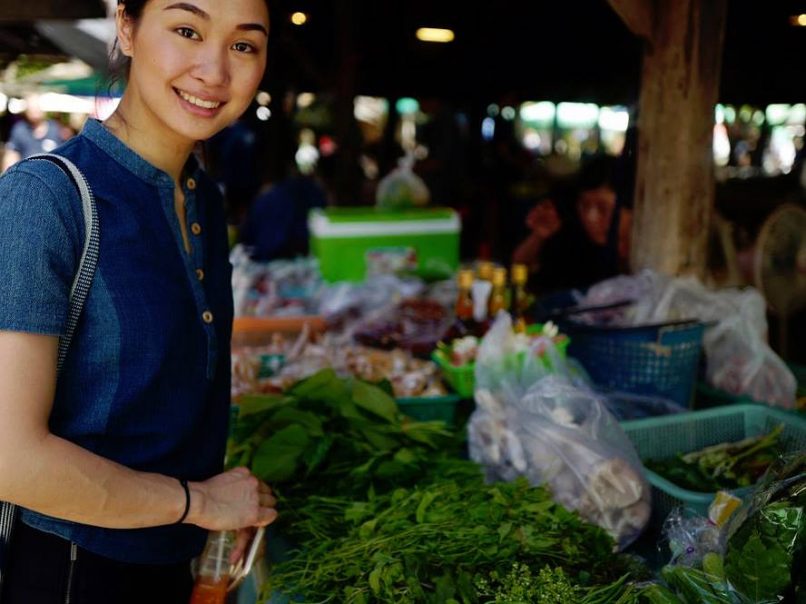 If you were an ingredient, what would you be and why?

Cucumber because I want to be as cool as a cucumber [laughs]. It’s sweet, crunchy and fresh. I mean, all the terms that you use to describe a cucumber, I would like to be.

Last but not least, what’s for dinner?

A pungent and spicy meal at Sri Trat [laughs]. You definitely have to go and try it.