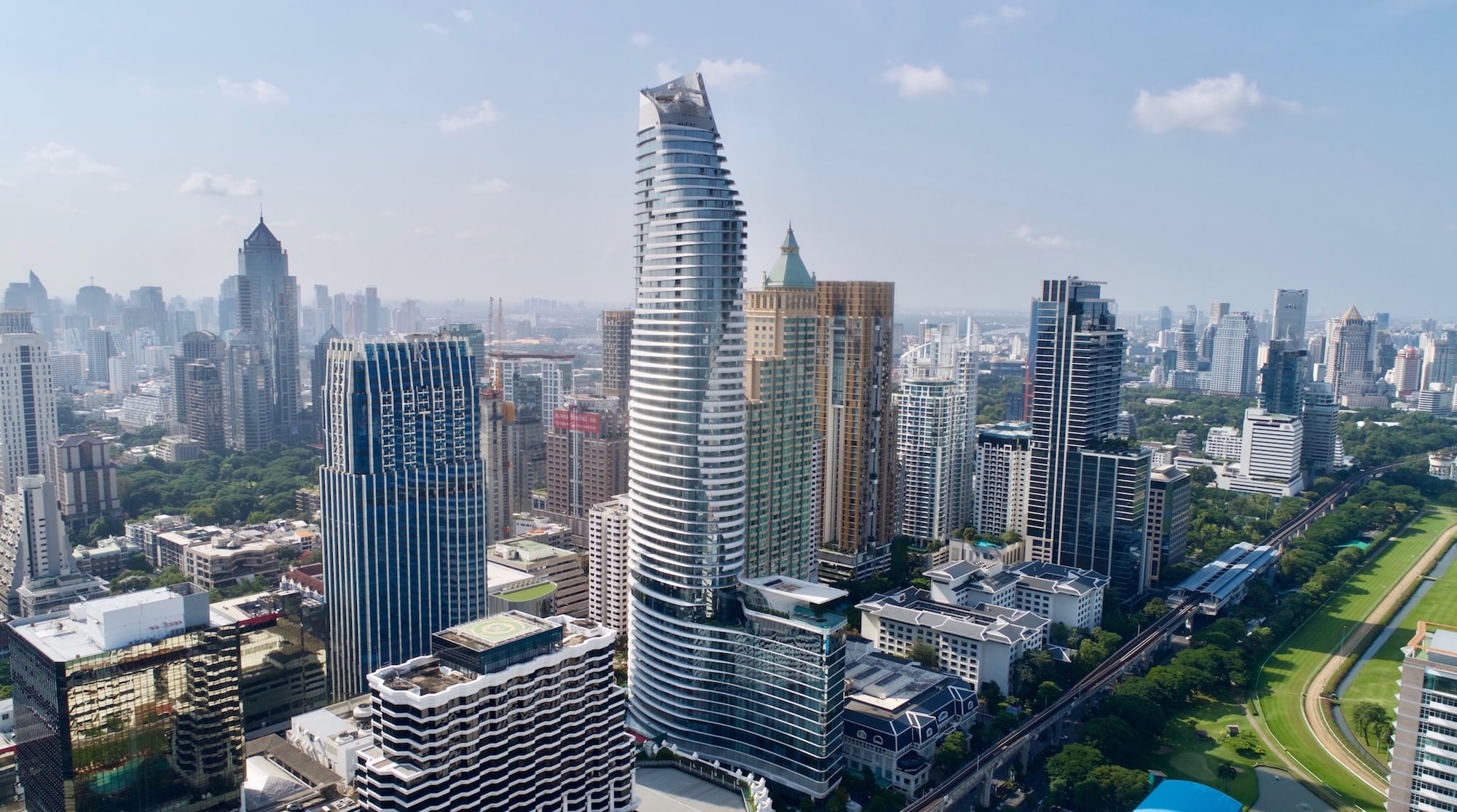 Calm, collected, and stylishly cool in a cropped suit and black loafers, André Fu sits in the airy white marble lobby of the Waldorf Astoria Bangkok. Worthy of more than just praise, it is the hotel he himself designed. Upon our first meeting it is evident that Fu truly lives and breathes the space. The Waldorf Astoria Bangkok bears the signature André Fu touch – of relaxed luxury, natural, understated elegance, and of a highly refined hybrid aesthetic – that goes far beyond the suit that somehow matches perfectly with the blue vases that sit behind him, and the lounge chair on which he is perched.

No stranger to the glamorous world of glitzy five-stars and gorgeous art spaces, the prolific designer behind the eponymous AFSO has occupied the top spot for Asia’s hottest (and simultaneously effortlessly coolest) architect for several years now. The Hong Kong native shot to fame after designing the world-renowned Upper House Hotel in Hong Kong in 2009, and has continued to woo the world of design with his creations at The Pavilion Suites at The Berkeley, the Andaz Singapore, and the Villa La Coste in Provence, to name a few. Yet Fu’s work inspires beyond his signature modern and quietly thoughtful design character, bringing about an idiosyncratic style that is delicately blended to the brands he collaborates with. It’s very much André Fu’s world, and tonight in Bangkok, dare we say it, it’s also his oyster.

Catching up with him just a few hours before the grand opening of the Waldorf Astoria Bangkok, we sat down with André Fu to speak with him about his inspirations and his process, his love for hotel design, and an exclusive glimpse of his next upcoming project.

Tell us a little about your inspiration behind the design of the Waldorf Astoria Bangkok.

The inspiration really started off with three key DNAs. For one, the fact that the building is inspired by the Magnolia flower, gives it a very contemporary quality. The second thing is the translation of the Waldorf Astoria legacy. Typically, most people would imagine the Waldorf Astoria as a brand that has a very strong Art Deco or Art Noveau root, very rectilinear. So here, how do we make it relevant to Bangkok today, and not just a transplant of a European or Western building? I mean, it’s a Western experience in a city that’s very Asian-hearted. It’s a very interesting proposition.

Lastly, we want to celebrate a sense of place, and we want to celebrate that Thai artistry in the project, without doing it literally. I’m from Asia and I don’t see it as a necessity to overplay the ethnicity or the ethnic, you know? At the same time, we chose to do something that really represents Thai culture – because that’s really at the heart of Thai people – but make it contemporary, and relevant to this particular hospitality experience that we’re trying to offer.

Talk us a little through the Thai cultural influences in your designs for this hotel.

The screen behind us [pictured below] is a good example. As you look at the screen, you’ll immediately see a strong Art Deco feel, which for me instils that Waldorf Astoria language. If you look closer at the way the two curved sections curl up, it’s a lot like a [traditional Thai] dancer, with the hands that open up.

I think there is a subtle twist to some of the details that actually provoke or tell the story from your previous question. Also, different parts draw different inspirations, such as Peacock Alley and the clock we have brought in, and the bronze we use to translate the arcade in a much more modern way. Different parts have different stories to tell. It’s really almost like how I see Bangkok and the nomadic quality of how I’ve experienced Bangkok; how I see certain synergy between different elements, and how I try to link different things together.

In your opinion, what sets the Waldorf Astoria Bangkok apart from other Waldorf hotels and other hotels in the region?

There are many classic five or even six-star hotels – you know, legendary hotels – in Bangkok. There’s also a wave of newer, younger, contemporary hotels in Bangkok. Yet here we are telling a story of a very authentic, classic hotel, in a very modern building.

I think the juxtaposition of a hotel experience that really kind of exists in this world that is partially old, partially new, partially modern, partially authentic, and yet very pure in its articulation, is very interesting. Especially with the Ajax marble that we’ve used extensively, infusing it with an Art Deco quality and Thai twists, and this residential quality. All of that. All spaces are quite intimate, and I think that kind of sets the hotel apart from possibly other properties in the area. It definitely is also a very different Waldorf experience compared to the other Waldorfs that people may have seen.

What is your creative process? How do you begin work on this kind of project?

The first process is that I need to talk to the owners. I have a prolonged conversation with the owners and the operating team to really understand what the vision is. I think there is a shared goal that we’re creating a modern hotel, yet it’s a modern hotel that has to reflect the brand’s narrative.

Many of our readers are based in Hong Kong, where you designed the incredible Upper House hotel. How is working in Bangkok different compared to Hong Kong?

Bangkok is very saturated with the hotel market, but at the same time, locally, Bangkok has undergone a major evolution in the last ten years. There’s an open-mindedness with Thai people at the moment, and for me, I think it’s the perfect time and place to build a hotel here. I think that the sense of artistry and heritage is something that is quite unique for this particular city. It has equipped me with an amazing portfolio of ideas and inspirations to play around with. I think in that context it’s been fantastic.

Besides hotels, you have also worked on art galleries, restaurants and retail spaces. What makes hotel design exciting as a designer?

Hotels are a more 360-degree experience, because you live in it, you smell it, you work in it. It’s a work-sleep-play venue, and it’s a full curation process because you experience it in a 360-degree scenario. That in itself actually makes it very different from a retail space or an art space. Those places you just go to for a duration of time and that’s it, but here, for most people, it’s more of a round-the-clock situation. I think for hotels, in that sense, it’s very unique.

Do you have a favourite hotel? Which, and why?

Favourite hotel? It’s the Park Hyatt in Tokyo, in Shinjuku. It’s done by John Morford, one of the first sky hotels. It’s a hotel that has inspired me to pursue a career in hospitality, and to create designs that stand the test of time. The hotel is phenomenal, and it still remains timeless to this very minute.

For all the aspiring architects and designers out there: what is some advice you could share with us? Some words of wisdom?

Personally, I think design needs to come from the heart. It’s very much a response of your own personal life, for me at least, but also seeing and having people in mind. It’s personal but it’s more of an organic response to everything that is around me. You don’t just design for you.

So for any aspiring designers, don’t rely too heavily on social media. Really go to places, absorb, feel, look and experience things first hand. And don’t just look at things that are new. Only by having a thorough understanding and appreciation of the authentic would you be able to innovate and create something that will surpass the test of time. I think that’s my ethos in many regards.

And lastly, what's next for André Fu? Where might we spot your designs next? Can you tell us about any upcoming projects?

Already? Even today? [Laughs]. We’ve got an interesting art space that’s coming up in Shanghai on the Bund. It’s for Perrotin. It’s the third space we’ve done for the French gallerist. The first one we did in Hong Kong, the second one we did in Tokyo, and now we’re working on the Shanghai outpost. It’ll be unveiled soon actually, in about three weeks, right opposite the Rockbund Art Museum. It’s a very loft-y large-scale gallery space, so we’re very excited for that.

Interior Design Bangkok Waldorf Astoria Luxury Hotels André Fu AFSO Bangkok Hotels Waldorf Astoria Bangkok
Lisa Gries
Managing Editor, Bangkok
Lisa loves to travel, and is always on the lookout for the world’s best nap spots. She’s a serious Asian art history nerd, and has a knack for languages and coffee table books. She hopes to publish her own novels one day, one of which will likely be called ‘All The Great Conversations I Had In A Bangkok Speakeasy.’ It’s a work in progress.
Travel Drinks Watches