Home > Living > People > Rule Book: Sheena Liam on not subscribing to labels and creating your own market 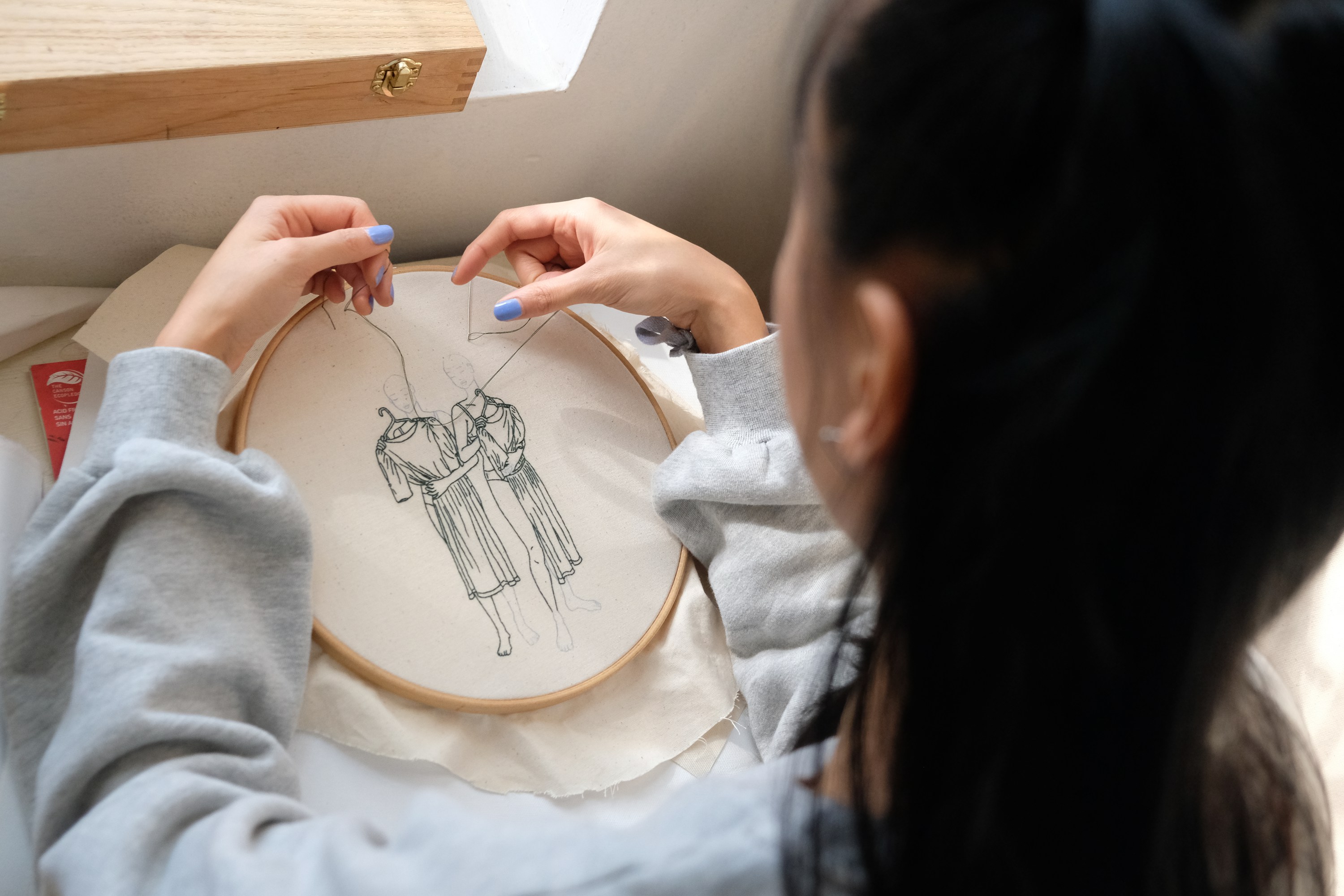 Rule Book: Sheena Liam on not subscribing to labels and creating your own market

Living
Rule Book: Sheena Liam on not subscribing to labels and creating your own market
Share this article
Next article

To call Sheena Liam a top model would be to stereotype her. However, Liam is the first (and only, thus far) Malaysian to have won Asia’s Next Top Model back in 2014. Since then, the 26-year-old has been a citizen of the world and living a nomadic life going from country to country. Throughout her life, she’s been many things: a writer, a model, a producer, and more. Now she has another line to add to her resume — an embroidery artist who’s just had her solo exhibition debut.

“Times New Romance” is currently held in Item Gallery Paris from 19th October 2018 until the 9th of November 2018. The solo exhibition showcases her contemporary embroidery works which depict figures of women based on photographs of herself. Those who have followed Liam throughout her work will be able to identify her signature style of having loose thread depicting the loose movement of the hair as part of the embroidery work.

“I was sitting in Idem (the print house) embroidering, and Patrice Forest who runs both the printing press and Item Gallery asked if I wanted to show with them,” explains Liam on how she first landed the gig. Unfortunately, as she was only working on her third embroidery piece ever, Liam declined the offer. “It took a lot of convincing from everyone for me to realise this wasn’t an opportunity that is handed to just anyone. So, I came back years later with a proper body of work I was comfortable displaying, and we finally had our show.”

Solo exhibition aside, Liam still produces embroidery art in her own time and they’re available for sale. Hence, we asked her where would be the best and most unconventional place to have an embroidery art piece. Her answer?

“In a gallery, recognised as art.”

“It started off as an idea for a one-off piece different from my usual mediums. The feedback I got was amazing so I continued and evolved my ideas as I went.”

“It gave me something to do during downtime…I’m not a person who can be idle with time.”

“I’ve always been attracted to figurative art. Hands, figures — I started off going to life-drawing classes so when I started embroidering it was only natural to work with what attracted me the most.”

“I’ve been working with stop-motion animation for the promos of my exhibition, so I’d say that Michel Gondry who is hands down my favourite director is someone I’d love to collaborate with.”

“I think subscribing to labels only limit the work you dare pursue. I’ve done a lot of things: helped produce editorials, edited films, magazines, and written stories. But I wouldn’t label myself as a producer, editor, or writer.”

“It’s annoying in modelling to have your looks be your main commodity — people saying no based on your features. However, I’ve always seen it as a side pursuit although it’s my biggest label.”

“A successful modelling gig to me is booking something international that encompasses print and media with a fashion powerhouse.”

“I travel constantly so I need my basics: skinny jeans and shirts. I have no space in my luggage for the fun stuff, which honestly is not ideal. I like dressing up.”

“I keep my wardrobe monochromatic. The only times I really get to go wild and have fun (with clothes) are at shoots so it is a nice balance.”

“My five must-have items in my suitcase are a denim jacket, moisturiser, charger, embroidery kit, and comfortable shoes.”

On travelling and living

“The most important thing when travelling constantly is rest. I don’t take it for granted and whenever I can, I’m in bed.”

“Everything else will fall into place. Change may seem tiring but after one week in a new country, you’ll have your routine: grocery store, train station, coffee guy. It will seem like nothing was ever meant to be any different. It takes just a week.”

“I don’t think I’d ever settle down in one place permanently. Not for now. Every time I think I’m ready to, I get an invite somewhere else — it doesn’t make sense to not try everything while I can.”

Asia's Next Top Model Sheena Liam ASIA'S NEXT TOP MODEL CYCLE 2 EMBROIDERY ARTIST TIMES NEW ROMANCE TIMES NEW ROMANCE PARIS
PohNee Chin
Editor, Kuala Lumpur
Poh Nee is the editor and writes about travel and drinks. When she's not living out her holiday dreams via Google Earth and sipping on an Old Fashioned down at the local bars, you can find her snug at home bingeing on Netflix and mystery fiction.
Travel Drinks