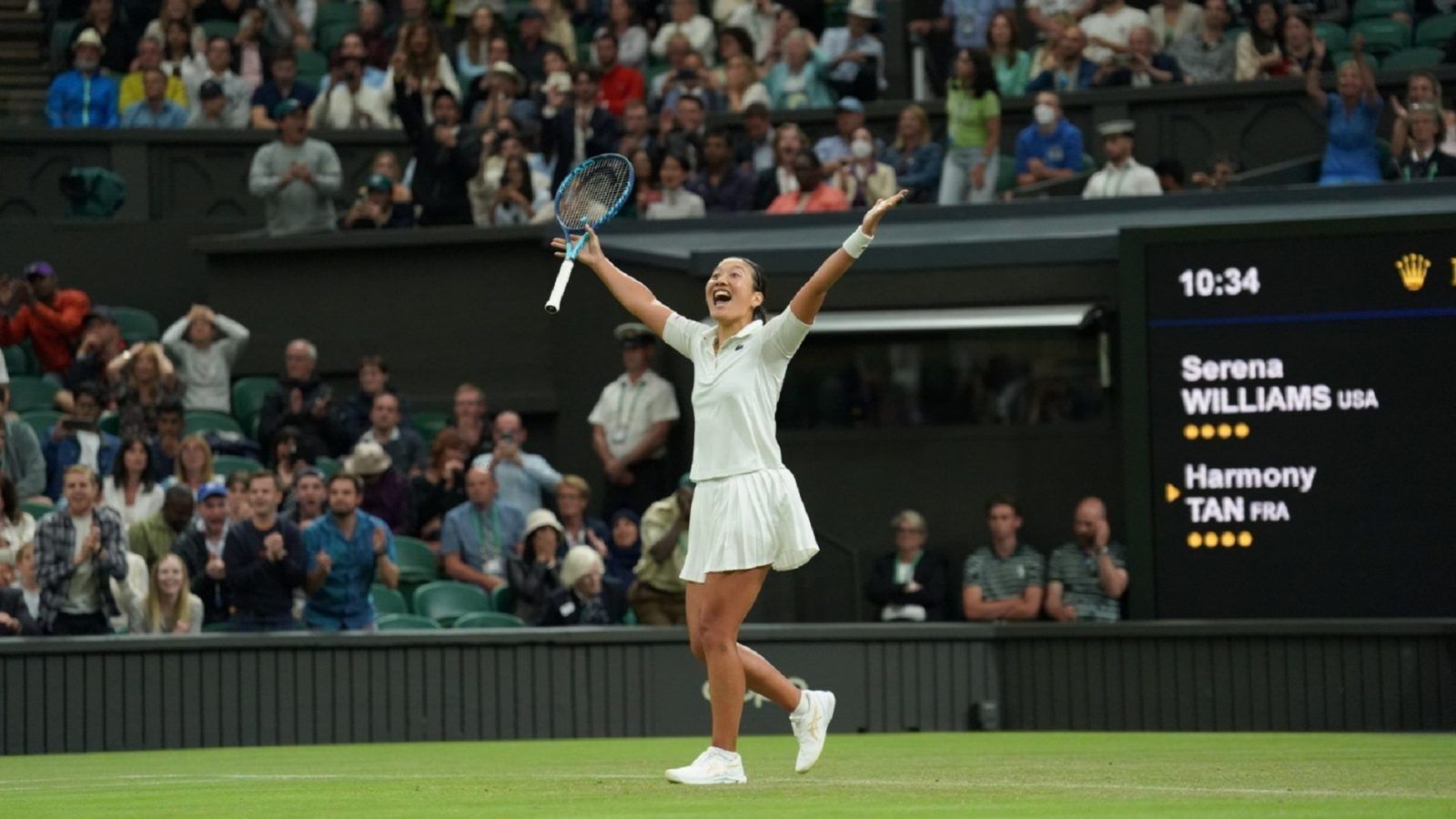 About Harmony Tan, the French tennis player who defeated Serena Williams at Wimbledon 2022

Living
About Harmony Tan, the French tennis player who defeated Serena Williams at Wimbledon 2022
Share this article
Next article

Harmony Tan defeated 23-time Grand Slam champion Serena Williams 5-7 6-1 6-7 (7-10) in the first round at Wimbledon in an epic encounter on 28 June that lasted three hours and 10 minutes. But who is Harmony Tan?

It was Tan’s first-ever match in the Wimbledon main draw and ninth across all the grand slams she has played to date.

A backhand so great even Serena had to applaud 👏 #Wimbledon | #CentreCourt100 pic.twitter.com/816YBpzG4q

For the next round, the 24-year-old will face Spain’s Sara Sorribes Tormo, who has a career-high singles ranking of world number 32, tonight at around 8pm MYT.

Tan was initially slated to play alongside German player Tamara Korpatsch as partners in the women’s doubles match yesterday but withdrew hours before the event, citing a thigh injury. Her decision didn’t go down well with Korpatsch, who had been looking forward to competing in her first Grand Slam doubles match. “It’s really not fair for me,” said Korpatsch in an Instagram post. “If you’re broken after a 3-hour match the day before, you can’t play professional. That’s my opinion.”

Everything we know about Harmony Tan

Where is Harmony Tan from and where did she train?

Tan was born in Paris on 11 September 1997. Her parents are of Cambodian and Vietnamese descent. According to WTA Tennis, her mother is a financial journalist and her father is an engineer. She can speak both French and English. However, it is unclear if she can converse in other languages.

According to Tennis Majors, Tan did not undergo training in the French Tennis Federation system, which is behind the making of some of the best players in the country. Instead, she trained in the Val-de-Marne League in the Parisian suburbs and is a member of Tennis Club Boulogne-Billancourt, a private club.

Her family had to sell a house to finance Tan’s training. Tan was then able to train outside of France at the Bollettieri Academy in Florida.

She has also honed her skills at the home of Melanie Molitor in Switzerland. Molitor is the mother of five-time Grand Slam singles champion and former World No.1 Martina Hingis.

How many titles has Harmony Tan won?

She played her first ITF tournament in Gonesse, France, in 2012. Two years after playing the tournament, she joined the INSEP (the National Institute of Sport, Expertise and Performance).

She won her maiden WTA title at the USD 10K tournament in Algiers, Algeria, in 2015. In total, Tan has won seven singles and one doubles title on the ITF Circuit.

Her coach is a 1998 Wimbledon finalist and former World No. 3 Nathalie Tauziat, who had herself defeated Williams at the Paris Open final in 2000.

Tan made her Grand Slam debut in 2018 at the US Open. She exited in the first round, losing in straight sets to Canadian tennis player Eugenie Bouchard.

Her first Grand Slam singles win came in the 2021 French Open, where she defeated compatriot Alizé Cornet in the first round.

“It’s always something to win at Roland-Garros, to do it in France is something incredible,” she told RMC Sport in French following her win.

At the Australian Open in 2022, she defeated Kazakhstani player Yulia Putintseva in straight sets in the first round.

However, Tan could not advance beyond the second round due to a calf injury.

The pain forced her to retire during the match with Ukrainian player Elina Svitolina, and Tan was taken out of Melbourne’s Margaret Court Arena in a wheelchair.

Serena Williams Harmony Tan Wimbledon 2022 Grand Slam
Manas Sen Gupta
Manas enjoys reading detective fiction and writing about anything that interests him. When not doing either of the two, he checks Instagram for the latest posts by travellers. Winter is his favourite season and he can happily eat a bowl of noodles any time of the day.
Travel Culture Entertainment Food
Sign up for our newsletters to have the latest stories delivered straight to your inbox every week.