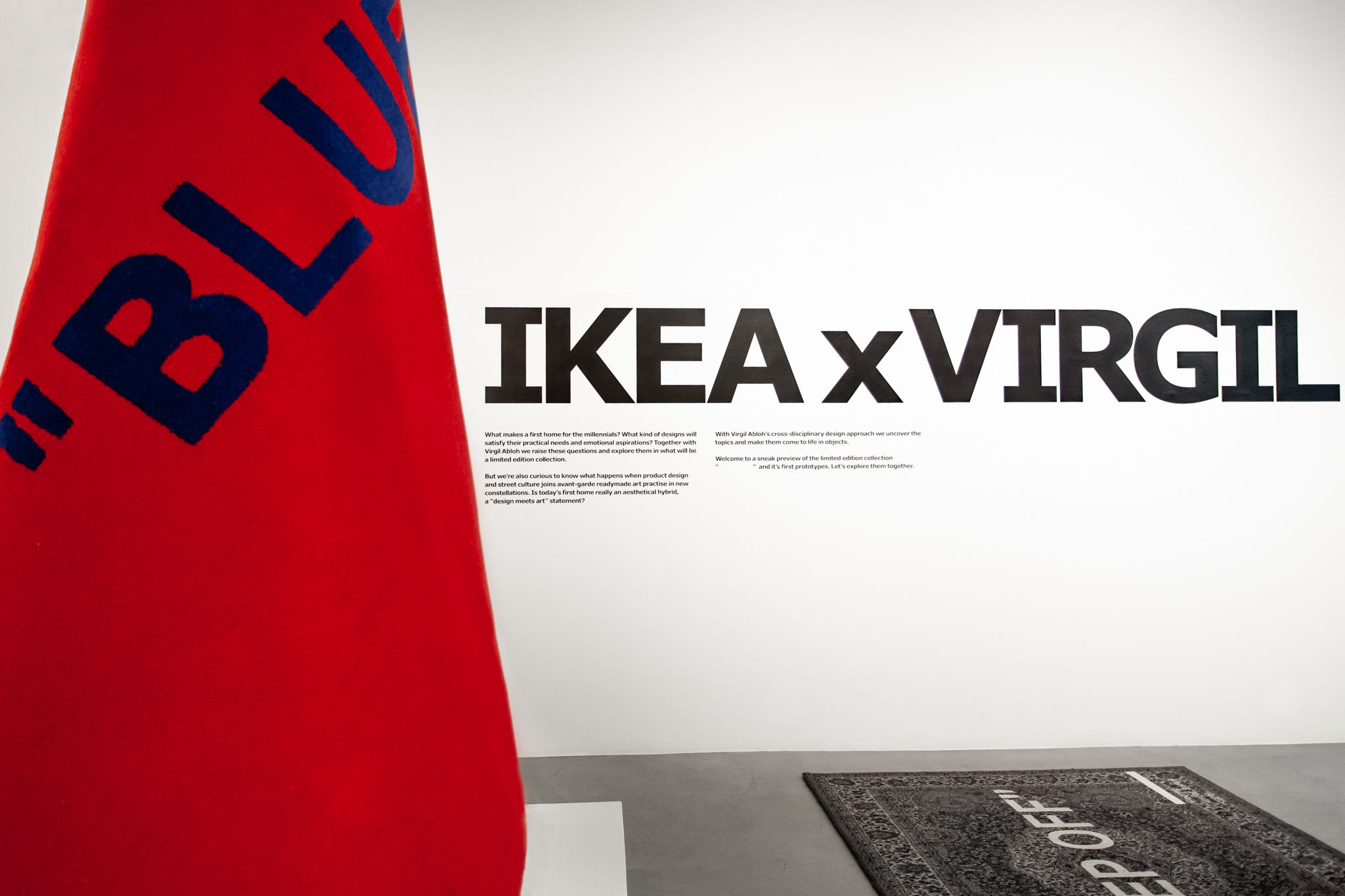 About this time last year, the world was set abuzz, when IKEA announced its collaboration with Virgil Abloh —  a creative designer of the cult-favourite Italian streetwear brand Off White, who has also just taken the helm of Louis Vuitton’s menswear division.

As we eagerly wait for its official launch date, take a look below for a sneak peek of what expect from this highly anticipated collaboration.

A few months after its mind-blowing announcement, the first prototypes of some selected products were finally unveiled. Titled ‘MARKERAD’, this limited edition collection features a series of fantastic homeware designs with Virgil’s signature, from triangular doorstops to ironic rugs. A fresh take on IKEA’s classic Frakta storage bag was also introduced with the word “SCULPTURE” printed on its paper facade.

In IKEA’s live broadcast, Virgil discussed about the milestones in the process and driving forces behind this special project:

“Growing up, I studied architecture and I was into music. And I always felt that there was a gap between the things that I loved and consumed — who made them and how they made them. So, it was like a premise that I gave to my design process since the beginning.” said Virgil Abloh.

“It’s a powerful tool to get more people into design and appreciate design. And they simply can see the process that we do in our design sessions that give the products that people live with” he explained.

Virgil further revealed his inspirations on one of his brainchild — a chair with a doorstop attached to one of its legs — stating that it’s a mythical, anonymous design as a metaphor:

“That doorstop is my tool within furniture or objects to sort of be a signature that metaphorically means something. But when it came to a chair and what I approached, I grew up in a home with these chairs — anonymous design but that was like a Swedish or Amish way of constructing chair, which we’ve then used it as a tool to merge with my aesthetic, the doorstop, and to make a language.” said Virgil Abloh.

Although some of the prototypes were already unveiled during IKEA’S Democratic Design Day in Älmhult alongside other collaborations, Virgil Abloh x IKEA’s MARKERAD collection will be launched at the end of 2019, with the exact release date still unconfirmed. Keep an eye for this collaboration series as it’ll be available in all IKEA markets.
Furniture Louis Vuitton Homeware Home Off-white Collaboration Virgil Abloh Ikea Virgil Abloh x IKEA's Markerad collection
Chanya Ormtavesub
Staff Writer, Bangkok
Chanya enjoys writing about everything related to fashion and beauty. If you ever catch her day-dreaming, she’s probably thinking about what to put next onto her shopping wish lists and how to make her cat happy.
Fashion Beauty
Sign up for our newsletters to have the latest stories delivered straight to your inbox every week.