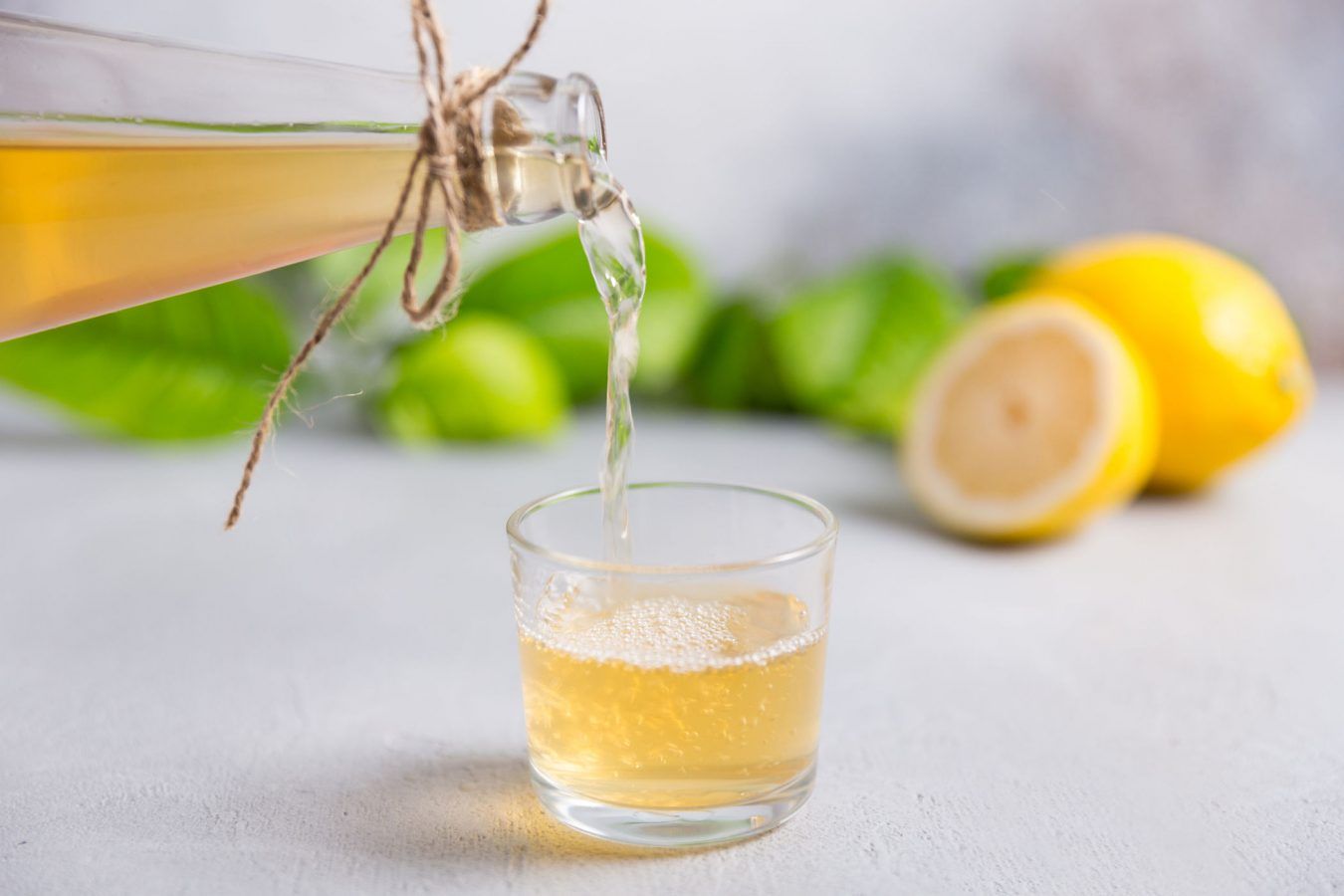 You’ve probably heard that a healthy gut is key to good health. Fortunately, there are multiple ways you can improve your gut health – from incorporating a healthy, balanced diet and taking dietary supplements to brewing the best fermented drinks. Here are kombucha alternatives you could try.

Indulging in fermented drinks, particularly, has witnessed a major shift, especially in the past few years. And, one such drink that people have been obsessed with for a long time now is kombucha.

A yellow-orange hued fermented drink made with tea, sugar, yeast and bacteria, kombucha tea is known to boost gut health owing to the presence of beneficial probiotics (healthy bacteria) in it. It is made by fermenting sweetened tea which starts off by tasting sugary and changes to a tarty and effervescent flavour after a week or two of fermentation.

Drinking kombucha tea is considered beneficial in many ways. Probiotics are known to support the digestive system. They help manage diarrhoea, inflammatory bowel disease and weight loss. Since kombucha has probiotics, the association between the two suggests its benefits in improving the health of our gut. Additionally, acetic acid (present in vinegar) is also produced during the fermentation process. It is known to have antimicrobial properties that fight harmful microorganisms while suppressing the growth of undesirable bacteria and decreasing the risk of infections.

When made with green tea, Kombucha also develops antioxidant properties that fight free radicals and reduce liver toxicity. Research says probiotic supplements could also help in reducing the risk of cardiovascular diseases, while another study in 2015 showed that kombucha helped reduce cholesterol levels in rats. These studies are suggestive of potential benefits of kombucha in reducing the risk of heart disease. And, drinking kombucha is also considered beneficial in managing type two diabetes and providing protection against cancer.

Kombucha can be made at home by mixing sweetened black tea with a symbiotic colony of bacteria and yeast (SCOBY) and leaving it to ferment. During this process the yeast breaks down the sugar in the tea to release friendly bacteria that fortifies the gut health.

Tried and tested kombucha and looking for more? Just like kombucha there are many classic fermented drinks that are both delectable and healthy. A wide range of kombucha-like drinks including kefir, kvass, apple cider vinegar and rejuvelac is immensely popular currently. And if you wish to try them, we’ve scouted out a tasty mix of some easy-to-make-at-home kombucha alternatives.

Here are some of the best kombucha substitutes and their recipes

Jun is a very popular kombucha alternative that’s concocted using green tea and raw honey instead of cane sugar and black tea. Also known as ‘champagne of kombucha’, this fizzy fermented drink has a history that dates back to thousands of years with its roots in the ancient Tibetan culture. And, much like other fermented foods and drinks, it helps your gut by replenishing it with friendly bacteria.

It has a subtle, delicate and less acidic taste as compared to kombucha and is also rather fizzier than it. While kombucha gets fermented over a period of one to three weeks, Jun tea’s fermentation cycle lasts between three to seven days. Additionally, while kombucha requires to be cultured at room temperature, Jun needs to be prepared in slightly cooler conditions. Both the drinks have a very low alcohol content — kombucha has about 0.5 percent while Jun tea has upto 2 percent.

If you want to brew it at home, you’ll need water, loose green tea leaves, raw honey, a starter liquid (pre-made Jun tea or some saved from your last batch) and Jun SCOBY (like kombucha).

A fermented drink prepared using wheat grains, oats, barley and rye, Rejuvelac is another popular kombucha alternative which was invented and promoted by Ann Wigmore. It has many notable health benefits like improving your gut health because of all the yeast and good bacteria produced during the fermentation process especially, Lactobacillus acidophilus. Being a probiotic, this kombucha alternative also boosts immunity, reduces inflammation and supports the overall digestive system. It fulfils your body’s need for different vitamins (especially vitamin B) and a variety of digestive enzymes and minerals.

Rejuvelac is a fizzy drink that tastes a little citrusy and is best served cold. While you can drink it as it is, many people also prefer adding it to their salads, dressings and broths to enhance the dish’s flavours.

If you want to try making this healthy drink at home, you need half cup wheat berries and four cups of filtered water.

A tasty variant of the usual milk-based kefir, water kefir is a fermented, carbonated beverage that is made using kefir grains and sugar water. This kombucha substitute is considered to have originated in the late 1800s and is one of the easiest fermented drinks to make at home. The grain-like culture of bacteria and yeast of this drink makes it a great probiotic and healthy for the gut, while also boosting the immune system. Apart from being rich in friendly bacteria, some research also suggests that it decreases the growth of certain types of cancer cells and can aid against breast cancer, colon cancer and blood cancer.

Since water kefir is brewed sans any milk, it is a great dairy-free and vegan alternative which can also be made using coconut water for added deliciousness. Being water-based also makes it super easy to add flavours and experiment with. You can use different herbs, spices, mint leaves, a fruit juice and vanilla extract to enhance its taste.

And for brewing your own water kefir at home, you need dechlorinated water, sugar and kefir grains.

A fermented drink that satiates your need for a flavoursome sweet and tangy probiotic drink, tepache is surely a saviour. It is a mexican tonic that’s a blend of pineapple rind and peels, cinnamon (for seasoning) and brown sugar (for sweetening). The alcohol content in this kombucha alternative beverage goes only up to two percent owing to the fermentation process. However, many people prefer mixing it with beer to make an alcoholic beverage. Best enjoyed chilled, it is a refreshing drink that’s claimed to have benefits as well.

Tepache contains probiotics (naturally produced during fermentation) which promotes digestive balance and overall health by improving nutrient absorption. A 2016 study also claims that L. plantarum (present in tepache) also helps in controlling high cholesterol in adults. Additionally, the fruit used to make tepache, pineapple in this case, is also a good source of vitamin C, calcium and potassium along with many antioxidant and anti-inflammatory properties.

To make tepache at home you need four and a half cups of water, half cup brown sugar, one fresh pineapple and one cinnamon stick.

Kvass is a traditional Russian probiotic drink made by fermenting rye bread which is usually blackish brown in colour. It has a very earthy, malty (almost beer-like) flavour from the bread, and it has an alcohol content of as low as 0.5 percent making it almost non-alcoholic.

Kvass is very popular for its probiotic benefits. From improving intestinal tract health and fortifying the gut health to boosting the immune system, this drink does it all. Additionally, it also has nutrients like B12 and manganese that are essential for the body and is also known to have antioxidant properties. Furthermore, kvass can also be made with beets which enhances the efficacy of the drink because of the multiple benefits of beetroot.

There’s nothing that a refreshing glass of lemonade can’t ease down. It’s the perfect kombucha alternative drink for a hot summer day and if you love fermented probiotic drinks then this version may be the best to savour. A lacto-fermented lemonade strikes the perfect balance between taste and health with its slightly bubbly, sweet and tangy flavour and all the benefits that probiotics are known to have on our gut and immune system. Since finding one in stores can be hard and they may also contain other additives, how about you take note of our recipe and DIY?

It’s absolutely simple and easy and requires a handful of ingredients, the most important one being whey. It is the protein-rich liquid drained off of yoghurt which is rich in probiotics. To extract whey from yoghurt, strain through several layers of a muslin cloth or cheesecloth placed on a fine mesh sieve. To brew the lemonade you need six and half cups of filtered water, half cup freshly-squeezed lemon juice, half cup sugar and half cup whey.

Boza is one of the most unique kombucha alternatives with all the beneficial properties of probiotics. It is a fermented malt beverage that’s made mostly with wheat, bulgur or millets but sometimes with maize, rye, oats and barley too. Most popular in Turkey, it has a subtly tangy and sweet flavour with a very low alcohol content and thick consistency which also gives it the name of fermented milkshake. It is considered to be a winter drink because of the warmth and nourishment it gives to the body.

Apart from lending the probiotic benefits, it is also a nutritious drink that contains proteins, fats, vitamins and carbohydrates along with digestion-supporting lactic acid with antimicrobial activity.

Enjoyed as a health tonic, fermented vegetable juice is another popular kombucha alternative that kombucha lovers swear by. Containing good bacteria and vitamins, it makes for a super healthy drink with a lot of benefits. While it is commonly made with beets, you can use any vegetable as per your preference.

A fermented vegetable juice repairs our digestive system by detoxifying and improving our nutrient-absorption capabilities. It nurtures skin health and also helps in boosting immunity while keeping our microbiome balanced and healthy. Making this beverage is rather simple and you need vegetables (such as beet, celery, garlic, ginger, cucumber, carrot or cabbage), salt, water and starter culture (optional).

Another kombucha alternative is a homemade ginger ale, a beverage that’s rich in probiotics and better than the bottled ones available in the market as they aren’t fermented and might contain additives too. Ginger is known to have many health benefits, hence, making your own ginger ale can also prove beneficial especially since there won’t be artificial flavouring and preservatives.

Ginger is known to have antioxidant effects. It reduces inflammation and relieves upset stomach and nausea that’s related to stomach flu, morning sickness and severe migraines. It may also help in lowering the blood pressure thereby reducing the risk of heart disease.

Lacto-fermented ginger ale is a great kombucha alternative that can be made at home easily; all you need is water, organic cane sugar, ginger root and whey or water kefir.

probiotics kombucha Fermented Tea kombucha substitute kombucha alternatives
You might also like ...
Food & Drink
Why everyone is confused by khao soi being named the best soup in the world
Living
How plants can actually boost productivity in your workspace
Food & Drink
Goodbye banana bread: Why homemade butter is the next big cooking trend
Living
How to fight insomnia, according to TikTok

An old-school at heart with a taste for contemporary finery, Divya believes in making the best of both worlds. She's a happy-go-lucky person who spends her time reading, Zentangling, or binge-watching. Hogging food & dozing off often comes naturally to her. Also, chai!