As summer comes to an end, the teenage, fiery soul of Leo realises that holiday is over. Now, it’s time for some grounding, planning, and taking on responsibilities as an adult in Virgo. 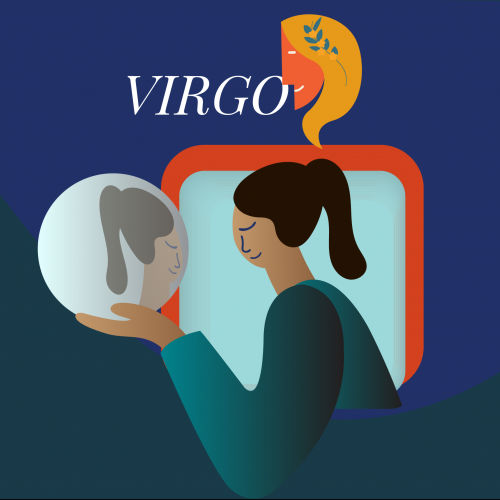 This is the second time the soul experiences the element of Earth. The first time was in Taurus, where it lavished in Mother Earth’s luxurious forests as a toddler that intuitively knew all it’s needs were going to be met. This time, however, the soul isn’t a toddler. It is an adult! An adult that’s no longer going to have people taking care of it.

In its second tryst in the element of Earth, the soul leaves the forest and takes upon itself to cultivate the wild lands into a fertile field to grow crops in order to feed it, as well as, others. Virgo is after all – the sign of service. Unlike a forest that grows wildly by the magical intuitive touch of mother earth – a field can only be bountiful through careful manipulation of the elements. This is why Virgo is the first ‘humane’ sign – i.e. a sign represented by a human being. After all, nature survives without human intervention. Human beings manipulate nature to create – culture – a term that comes from the word ‘cultivate’. Thus, Virgo gets the reputation of being a perfectionist nitpicker. Everything has to be ‘just right’ for a Virgo soul to be satisfied. However, Virgo must learn to deal with the unpredictable forces of nature. “Be prepared” is the motto.

Now, it’s important to understand the Virgin of Virgo isn’t the asexual nun. Virgo is after all a sensual earth sign – and those who have dated a Virgo know that they thrive when expressing their sexuality. These Virgins are Vestal – i.e. they’re capable of living their lives independently without the hassle of someone else coming in and messing up their hard work. They’re self-sufficient to the point that they’re able to live their lives by their own rules and couldn’t give a damn about what society has to say!

In Virgo, Mercury takes on a more calculated and analytical approach to life. Unlike in Gemini, where Mercury is a trivia hound, in Virgo, Mercury only wants to learn what’s practical and essential to their progress. Gossip, becomes vital information. All communication becomes purposeful. Virgos make excellent scholars – provided they’re studying subjects that are essential. Opinions are firm and fixed, based on carefully analysed principles and facts, and they don’t mind being critically blunt because it’s better to be right that just fuel ignorance for the sake of being liked.

However, Virgo, despite it’s ability to be independent and self-sufficient cannot function without being of use. Virgo’s needs to be needed. They feel incomplete if they’re not put to good use. Yet, Virgo needs to learn the art of compromise within this life cycle so that its soul can evolve to the next stage of Libra – the sign of balance and partnerships.

Virgo is known to be as precise in love as it is in the office. They can schedule their lovemaking the way they schedule their vitamin charts, workout routines, as well as, their meal plans.

That doesn’t mean they’re not romantic. However, they’re not the types to recite poetry under a full moon night.

Virgo, unfortunately, tends to be the lover that’s the nag and the shrew. They don’t mean to be this way, it’s just that they can see you’re not living up to your potential and that kills them. If only you’d listen to them, you’d discover how right they are, and how by following their careful advise, you can be the best that you can be.

Remember, Virgo is the Vestal Virgin – capable of living a life without having you disrupt their perfectly laid plans. However, when a Virgo has chosen to love you – yes, they choose to love people – it’s because they’ve seen a prosperous collective future with you as a partner.

They aren’t prudish – by far. However, unlike Leo that wears their heart on their sleeve, Virgo knows how to discriminate between a casual fling and a stable long-term-relationship. It’s their way of protecting themselves from the chaotic trouble that’s caused by heartbreak. A broken heart is the hardest thing for a Virgo to mend.

The best way to win a Virgo’s heart is to start by building trust. If a Virgo sees you’re too eager to sleep with them, they’ll know you’re not serious about building a stable future. Thus, it’s best to wait.

Cleanliness is next to godliness – even if the Virgo you love is a staunch atheist. Thus, a good seduction technique to get a Virgo in the mood would be to offer to shower together. A Virgo will judge you if your apartment is a pigsty and your bed linens aren’t clean. It doesn’t need to be fancy – it just needs to be clean.

When a Virgo is in love with you – you become their priority and their responsibility. Their idea of romance is taking care of you. They’ll make sure your home is kept well, you’re eating healthily, and your physical and sexual needs are met.

Unlike Cancer, who mothers their lovers, Virgo is like the matronly nurse that likes to run a tight ship. They’re truly concerned about your well-being as it’s a reflection of them as a lover. However, this leads to many of them falling into relationships where they’re taken for granted. When that happens their critical and complaining side comes out, where they’ll be brutal with their opinions and won’t hesitate to tell you everything that’s wrong with you and how grateful you should be to have them in your lives.

Remember, Virgo is obsessive, and very anal-retentive. They notice everything. This isn’t a sign that’s above stalking you to prove they love you. They’ll know your life better than you would, and know where it’s headed.

They can’t help it. Virgo is ruled by Mercury – the most feisty ball of energy trapped in the stable element of earth. This is why; Virgo’s tend to be restless, and can’t seem to be satisfied till everything is going their way.

When Virgo loves you, they’re willing to be your doormat. However, this is a practical earth sign. When they know it’s fruitless, they’ll pack their bags and leave. The key to keeping them happy is to truly listen to them. Not just nodding and smiling along as you pretend to listen to them. You really need to listen to them – for both your good and theirs. They truly believe they were put on this Earth to make everything better.

You just need to be patient with them as they’re patient with you and all your faults – trust me, in their eyes, you have plenty. But they aren’t insurmountable.

Your patience will be rewarded by a loyal doting partner who will do their very best to make life beautiful for you. And their beauty isn’t superficial. It’s full of purpose, substance, and most importantly – value. They’re in it for the long haul. The question is – are you? If you are, you’ll realise how lucky you are to have such a valuable asset within a Virgo partner. Just remember to say, ‘thank you’ regularly. That’s all they ask.

Virgo lives to serve. They live to work. They live to be productive and accomplish things. However, Virgos fail to see the bigger picture, as they’re so caught up with minute details.

But what they lack in foresight, they make up with a staunch work ethic and diligence. When it comes to work, Virgo never compromises nor shirks responsibilities. Coupled with their conservative outlook on money and expenses, it’s no wonder majority of the self-made rich people are Virgos.

Virgos, though natural communicators, have a reputation of doing their work quietly and efficiently without too much fanfare. They don’t strive to be centre stage nor be the most popular. They’re pleasant to be around and friendly, but they don’t really believe in wasting time with idle chitchat. Virgo gathers information that can enable them to progress up the corporate ladder.

Even though a Virgo may work at a slow pace, their mind is perpetually in high gear. They’re great at solving problems and handling projects that require careful and meticulous attention to detail. Even in a creative field, a Virgo will make sure everything is up to their own lofty standards and would rather die than hand over work that’s slip-shot and makeshift.

They won’t mind taking on more responsibilities, nor will they mind having to work overtime. They know their efforts serve a higher purpose that will lead to overall profitability. True, they are motivated by a big pay cheque, but more than that, they need respect and appreciation to really flourish. Sure, they may laugh off praise and make humble self-depreciating remarks. However, that’s only because they suffer from a chronic lack of self-esteem – thus need you to tell them they’re good.

Even though they do well in large corporations, Virgo is also the sign of self-employment. This is the sign that believes, ‘If you want something done right, you must do it yourself’. They will hustle their way into making a steady, stable, and profitable self-practice. They’ll have a reputation for being ethical, well informed, and willing to go above and beyond the call of duty to ensure their client’s needs are met with the utmost care.

Virgo needs to know what they do is serving a higher purpose of some sort. However, that doesn’t mean they’re above doing work many consider menial. After all, menial jobs are essential to make life all the more functional and productive.

They don’t have an ego when it comes to jobs – because they believe in the honour of service. Many a times, they can make a gold mine out of these menial jobs primarily because no one else is willing to do them, and they can do them with pride and ease.

However, it is essential for a Virgo to know when to quit. This isn’t a sign that’s likely to job-hop. They need to know when their services are no longer in need, or when they need to move on to bigger and better prospects where they can flourish and make a bigger difference.

The good thing is, Virgo will always find someone or somewhere that needs them. It’s The Universe’s way of allowing Virgo to fulfill their need of being in service. Anyone would be lucky to have a Virgo be a part of their team.

Culture
The K-pop group you should stan, based on your zodiac sign

Food & Drink
What to eat for dessert this afternoon, based on your zodiac sign

Culture
The kind of employee you are, based on your zodiac sign

Zorian Cross specialises in eastern and western schools of mysticism and philosophy, and over the past 15 years, has established himself as a respected tarot reader, astrologer, numerologist, and psychic channel. Also a certified ashtanga/vinyasa yoga instructor and a multi-award-winning theatre artiste, Cross’ 2019 TEDX Talk focused on how the transformative power of pain, when channelled through art, can make the world a better place. Follow him on Instagram: @ajnajog

‘Sex coffee’ is a thing that exists, and we aren’t mad about it

How to finally fix your sleep schedule in 2023