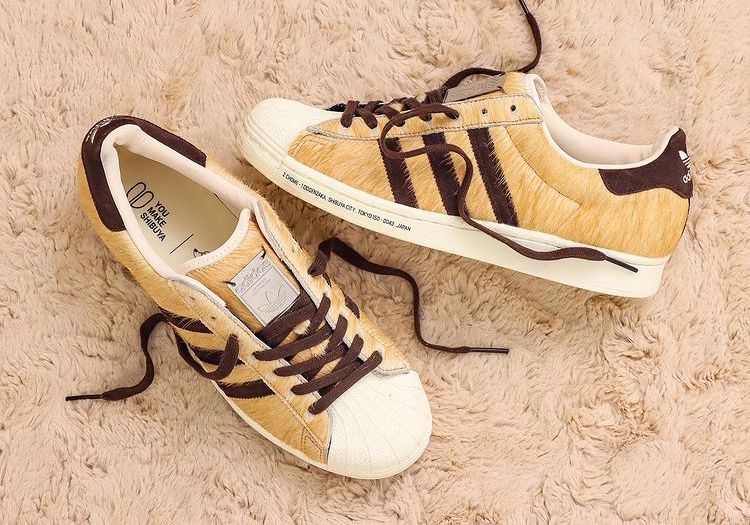 Style
Adidas teams up with Atmos Tokyo to pay tribute to Hachiko, Japan’s most famous dog
Share this article
Next article

If you’re a dog lover, perhaps this Adidas Hachiko pair of sneakers will be up your street.

The brand with the three stripes has teamed up with the sneaker specialist, Atmos Tokyo to create a pair of shoes that pay tribute to Hachiko, arguably Japan’s most famous dog. Covered in a beige faux fur, evoking the coat of this Akita, who lived in Tokyo, the sneakers will be subject to a pre-order lottery before being released, September 18.

Dogs are often credited with being loyal, but Hachiko became famous in Japan for showing an unwavering level of devotion to his master. In the 1920s, the dog used to accompany his owner, a professor teaching at Tokyo University, to Shibuya Station every morning, then return alone in the evening to wait for his master’s return. Until the day that it is when his master never arrived, after suffering a fatal cerebral hemorrhage at work. But this did not prevent Hachiko from coming back to the station every day to wait for his master, year after year, until the dog’s death in 1935.

The story moved the people of Tokyo, then the whole of Japan, before becoming known all over the world. Japan’s most loyal dog now has his own statue at Shibuya Station, and has inspired many books and movies, including “Hachi: A Dog’s Tale,” starring Richard Gere. Now, Hachiko will also have his own pair of sneakers: the Adidas Superstar Dog, designed by the famous three-stripe brand in collaboration with Atmos Tokyo.

Style
Sneak peek: the first ever low-carbon running shoe by Adidas and Allbirds

For the occasion, the iconic adidas Originals sneakers are adorned with a beige faux fur, chosen to recall the dog’s coat, and contrasting with the three brown stripes. A silver plate featuring the adidas logo accessorizes the tongue of the shoe, while an address is written on the sole, corresponding to the location of the Hachiko statue.

This dog is so famous in Japan that many specialized websites are already predicting stock shortages. This is no doubt why a lottery is being held online for anyone hoping to pre-order a pair (until September 17). Successful applicants will then be able to buy the precious fur-covered shoes from September 18, at the price of 15,400 yen (about THB 4,683).

Fashion Style Sneakers Adidas Pets Dogs Hachiko
You might also like ...
Living
As Thailand passes a tampon tax, Adidas launches period-proof leggings
Style
Adidas and Lego team up for a buildable Lego Superstar brick model
Culture
International Dog Day 2021: if you were a dog, which breed would you be?
Travel
Inside After Bark: a London bar that serves cocktails to dogs and humans
Lifestyle Asia
Here's where you can read the latest news and stories from Lifestyle Asia and our sister titles PrestigeOnline and Augustman, curated from all of our editions in Hong Kong, Singapore, Kuala Lumpur, Bangkok and India.
Luxury