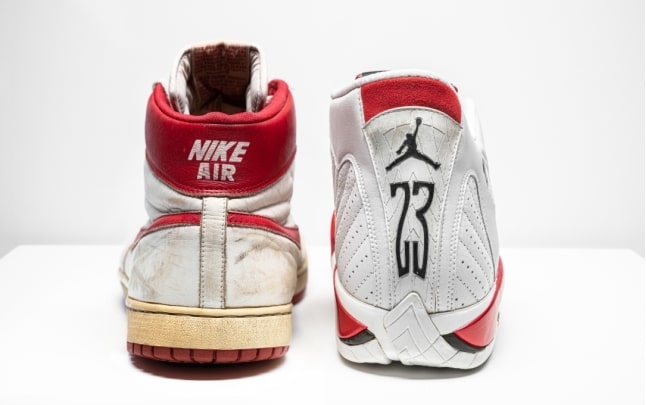 A millennial dream: Christie’s is holding a Michael Jordan-themed auction

Style
A millennial dream: Christie’s is holding a Michael Jordan-themed auction
Share this article
Next article

If you were as obsessed as we were with The Last Dance, you’ll love this.

Christie’s is collaborating with sneaker purveyor Stadium Goods for the online sale “Original Air,” which is billed as “the most comprehensive sneaker record of Michael Jordan’s era-defining Chicago Bulls career.”

“Original Air” features a selection of Michael Jordan game-worn sneakers and rare memorabilia that represent the most iconic moments of Jordan’s decades-long career and his enduring impact on culture and style.

Among them are a pair of Nike Air Ship that Jordan wore for a brief time for the NBA preseason and early games of his rookie season. According to the basketball legend’s preference, the left shoe is notably a size 13.5, while the right shoe is a size 13.

Another star lot is a pair of Air Jordan 7 “Olympic” that Jordan famously wore for the final of the 1992 Barcelona Olympic basketball tournament.

These iconic sneakers are sourced from a former receptionist of the Ambassador Hotel in Barcelona, where Jordan and his fellow teammates stayed during the competition.

These Jordan 7s are now expected to fetch up to $70,000 during Christie’s “Original Air” sale, which will take place from July 30 through August 13 on the auction house’s website.

“The pieces we’ve put together for this auction are truly unique, and will have deep resonance for Jordan fans, sneaker connoisseurs and pop culture collectors alike,” said John McPheters, Stadium Goods co-founder and co-CEO, in a statement.

“Original Air” is the first in a series of athletic-themed online sales, respectively entitled “THE ATHLETE: Photographs by Walter Iooss, Jr.” and “For the Love of the Game,” which will collectively explore the enduring influence of sports on art.

“We sought to offer only the highest quality pieces in the same way we evaluate items for Christie’s Luxury sales — looking for quality, rarity, and uniqueness of design,” Aline Sylla-Walbaum, Global Managing Director of Luxury at Christie’s, remarked in a statement.

These new sales will take place a few weeks after Sotheby’s made headlines for the record-breaking sale of a 1985 pair of Nike Air Jordan 1s, signed by none other than Michael Jordan.

The shoes went under the hammer for $560,000, which marks a record sum for a pair of sneakers at auction.

The resale market for vintage footwear is experiencing a boom in recent years, driven by an ever-growing class of millennial collectors that seek shoes with a prestigious pedigree as an alternative asset class.

According to American investment bank Cowen, the global secondhand market for sneakers is projected to be worth $6 billion by 2025.

Style Sneakers Christie's Michael Jordan
You might also like ...
Style
Meet Yeezy Gap: a more budget-friendly adaptation of Kanye West’s brand
Culture
23 thoughts we had while watching Michael Jordan on ‘The Last Dance’
Style
10 sneaker drops to look out for this July 2020
Style
A guide to properly caring for your leather shoes
Staff Writer
Style Sports