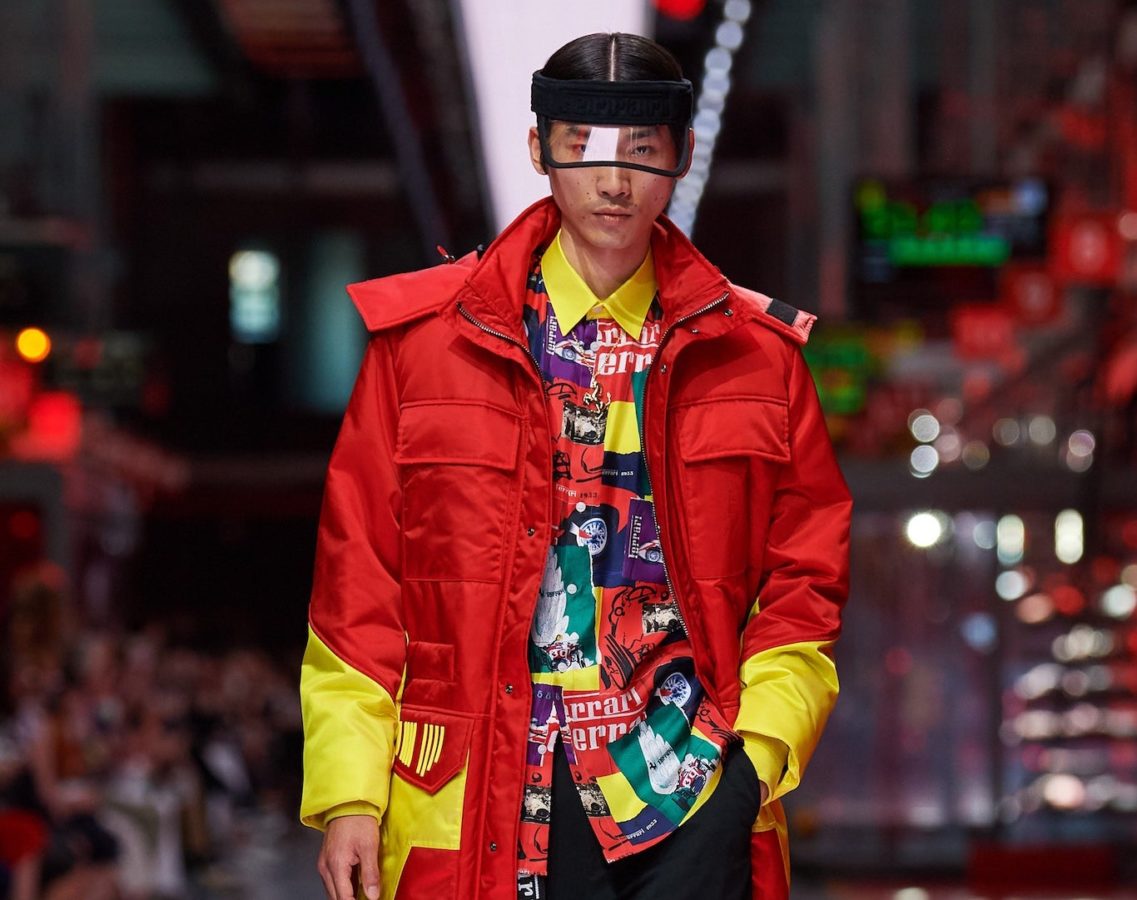 As it turns out, Ferrari can do it all.

Last Sunday, the Italian luxury car manufacturer debuted its first luxury fashion collection at its headquarters, offering menswear and womenswear with a sporty and futuristic bent. The clothes were designed by brand diversification creative director Rocco Iannone, who had previously cut his teeth at luxury fashion brands like Dolce & Gabbana and Giorgio Armani.

The collection expanded beyond the branded jackets, T-shirts and hats that have long been sported by Ferrari fans. Instead, there were minimal sneakers, bold outerwear and Prancing Horse jewellery worth considering as they came down the runway.

Below, discover all the highlights of the first Ferrari fashion show.

[All images courtesy of Ferrari]

The fashion show was held at the Ferrari Factory

Normally, the Ferrari assembly line in Maranello, Italy, is where the brand’s roaring automobiles come to life. But it also proved to be the perfect launchpad for Ferrari’s fashion: modelling heavyweights like Mariacarla Boscono and Natalia Vodianova strutted down a narrow, illuminated strip along to a thumping soundtrack by fashion’s favourite music producer, Frédéric Sanchez. If the aim was to leave an impression, the Ferrari certainly did.

The clothes were inspired by cars

Ferrari fans will know that for the Italian automaker, design begins with the body. It has long applied that philosophy to its iconic speedsters. Now, it has come full circle with its clothes, which were inspired by the colours, lines, volumes and even the materials of its covetable cars. Anoraks, trenches, and parkas made a splash with Ferrari reds, blues and yellows. Their geometric designs mirrored the vehicles that sat along the runway. Some of the high-octane looks were even crafted from carbon fibres, the same stuff you’ll find in Ferarri’s aerodynamic automobiles. Overall, the collection was sporty with echoes of streetwear silhouettes, making it clear that seamless movement was paramount in creative director Rocco Iannone’s vision.

Models had Ferrari prints on

The Prancing Horse is on a mission to dominate the fashion landscape, so what better way to do that than with its logo? In a literal transition from fast cars to fashion, Iannone designed sporty socks and Off-White-esque buckle belts streaked with Ferrari’s name. The prancing horse, which has long adorned the hoods of Ferrari’s vehicles, now dangled proudly from necklaces in gold or silver. Some models showed off skirts with a pattern made from the galloping emblem, while others sported silk blouses and Bermudas printed with vintage magazine covers and images from Ferarri’s archives. Incorporating the house’s iconography in clothes is a trick we’ve seen pulled by the likes of Louis Vuitton, Burberry and Fendi, and it might be just the thing to put Ferrari on par with these luxury brands.

The Prancing Horse dropped some sneakers, too

For its first collection, Ferrari teamed up with Puma for a whole range of sneaker silhouettes, which for the most part were clean and minimal. All-white kicks made their mark with spiky, sculpted soles, with a Prancing Horse embroidered on their tongues. This is not the first sneaker collaboration between Ferarri and Puma, but it marked the first time they were showcased on such a stage. Another brand that made an appearance was Ray-Ban, who made the sporty, goggle-like sunglasses that shielded models from the flashing lights on the runway.

The collection was for the next generation of Ferrari fans

Well, more like the Gen Zers who are now shaping the trends and the tides of the fashion industry. As shared by Iannone, Ferrari plans to “to enlarge our fan base, including young generations and women especially.” That was clear not just from the logomania, but from the sustainable materials (including recycled plastic bottles) that were present in the collection. Not to mention that most of the 52 looks shown were unisex, designed to suit different genders and body shapes. Ferrari Style, as the Prancing Horse’s fashion division is called, won’t even follow the fashion calendar. Instead, the brand will drop new collections over the coming months until June 2022.

Ferrari Fashion Motoring gear
Lifestyle Asia
Here's where you can read the latest news and stories from Lifestyle Asia and our sister titles PrestigeOnline and Augustman, curated from all of our editions in Hong Kong, Singapore, Kuala Lumpur, Bangkok and India.
Luxury