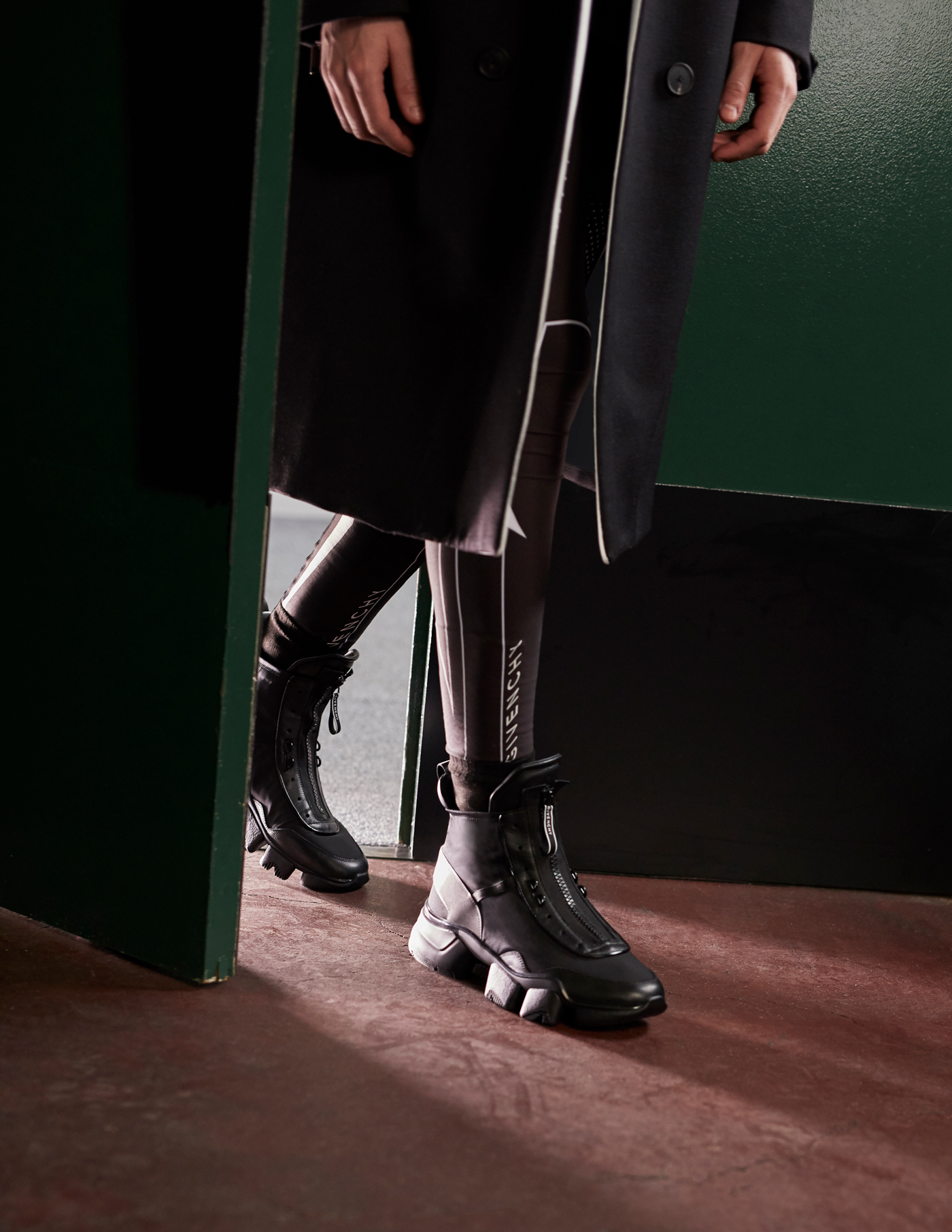 Though menswear is new province to Clare Waight Keller, the recent artistic director to Givenchy went against the grain when she presented haute couture menswear together with womenswear earlier in January — a revolutionary first for Waight Keller, Givenchy and history. This gender crossover in couture is historically known to be divided. Yet in another round of menswear firsts, Waight Keller now dips her toes into on-trend sneakers for Fall 2018.

Enter the Givenchy Jaw. Debuted on the house’s Fall 2018 runway this is the British designer’s first-ever sneaker venture for the house. Waight Keller took inspiration from the shark, stamping its distinctive teeth onto the soles in a nod to predecessor Riccardo Tisci’s fancy towards the marine predator — embodied via Spring 2012’s shark t-shirts to oversized shark tooth necklaces.

Constructed in a mix of leather and nylon, the Jaw’s high-top upper hugs the ankle, sitting on an on-trend chunky midsole silhouette. A practical yet millennial-pleasing zip closure is attached to a pull strip printed with a subtle Givenchy text logo. These cool grit-meets-sleek urbanite elements are what overnight sneakerhead queues will camp out for.

The first drop is slated to feature all-white or all-black colourways. While round two will see it rendered into a classic sneaker style in white, black or three-colour iterations in blue or red.

Waight Keller’s predecessor, Riccardo Tisci, was known as a streetwear pioneer, spearheading the graphic t-shirt mania as early as 2010 (remember that ubiquitous Rottweiler tee?). This updated footwear selection does make full sense for the brand to sustain its longtime clients. Still, with Waight Keller’s pinpoint intuition for what’ll work, she’d have given Tisci circa 2012 Givenchy a run for his money.

The Givenchy Jaw sneaker will launch online and in Givenchy boutiques on 17 August.

Why Gucci, Dior, and Nike reign supreme as the hottest brands of this season

The best celebrity Halloween costumes of the past decade

Need some inspiration for Halloween? Here’s when

Chanel N°5 has created a timeless mark with its a

Ladies, it’s time to upgrade your wardrobe this

A huge congratulations to two of our favourite bar

We got that Friday Feeling going on. 📷. @vegan