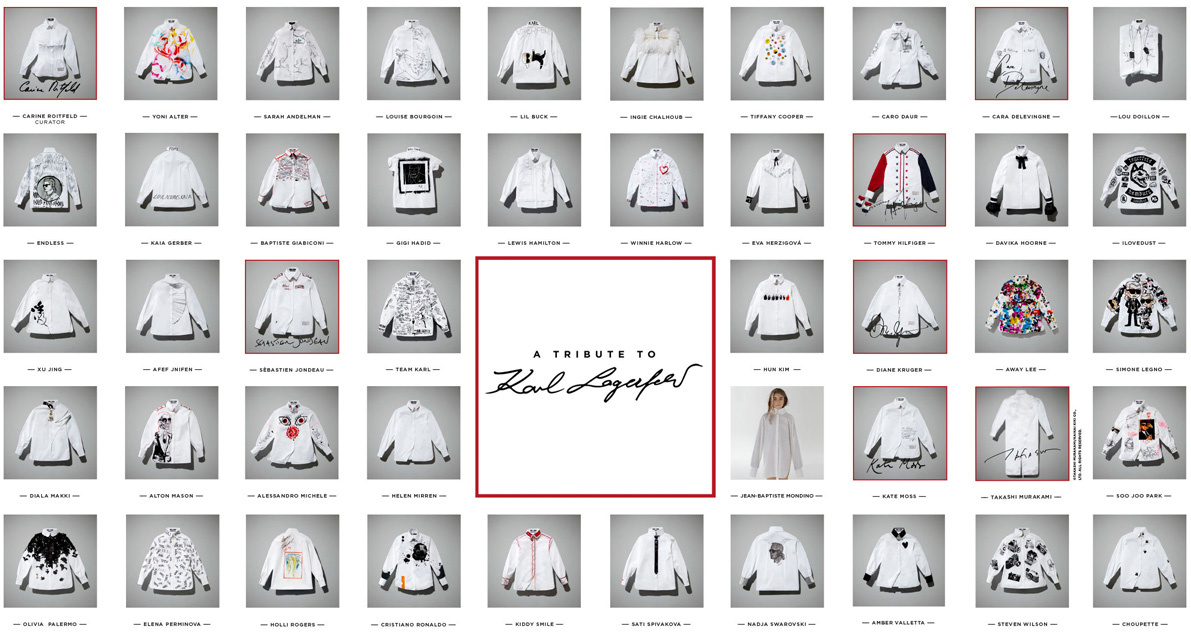 Style
Karl Lagerfeld tribute shirts by Kate Moss, Takashi Murakami, and more have been unveiled
Share this article
Next article

Earlier this summer it was announced that a number of global creative talents and friends of Karl Lagerfeld were going to come together for a very special initiative. Entitled ‘A Tribute to Karl: The White Shirt Project’, the result of the special creative collaboration has finally been unveiled.

Celebrating the German designer’s legacy through personal reinterpretation of his favourite iconic design, seven talents — including Carine Roitfeld, Cara Delevingne, Tommy Hilfiger, Sébastien Jondeau, Diane Kruger, Kate Moss and Takashi Murakami — have designed a special Karl Lagerfeld tribute shirt, each replicated in a limited quantity of 77 pieces and exclusively sold at Karl.com and Farfetch.com at the price of €777 (approx. THB 25,930).

This number seven was chosen not only because it was the late designer’s lucky number, but also because it coincidently represented many of his favourite elements in life, such as his favourite arrondissement in Paris and also the name of his bookshop and publishing house: 7L.

Roitfeld, curator of the project as well as the style advisor to maison Karl Lagerfeld, inserted a corset and open-front to hers for a punk-meets-couture finish, while model and long-time friend Kate Moss printed a poem she wrote. Japanese artist Takashi Murakami, meanwhile, added tonal white flower-and-skull embroideries along the shoulders and rear, and fellow designer Tommy Hilfiger blended his own aesthetics into the design with Tommy stripe details and seven stars — in his signature colours of red, white and blue — adorning each side of the placket. Crafted from cotton poplin, these shirts all feature high stand collars and thick cuffs, a direct reference to the look of the late designer.

All seven tribute shirts are now available online, with proceeds from the sales going to the Sauver La Vie charity initiative for medical research at the Paris Descartes University, one that Lagerfeld secretly supported for many years.

Fashion Karl Lagerfeld Kate Moss Takashi Murakami
Lifestyle Asia
Here's where you can read the latest news and stories from Lifestyle Asia and our sister titles PrestigeOnline and Augustman, curated from all of our editions in Hong Kong, Singapore, Kuala Lumpur, Bangkok and India.
Luxury