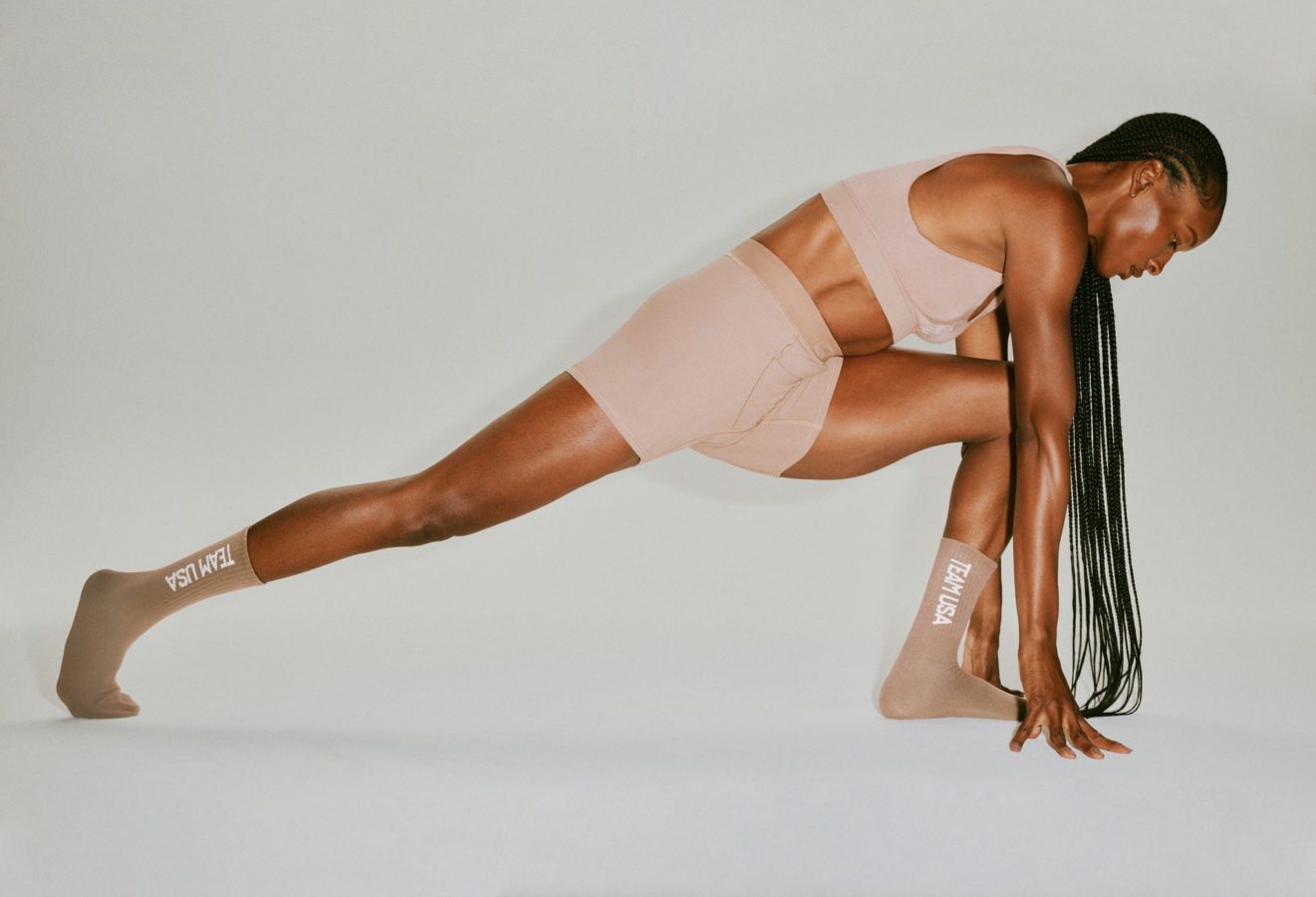 Who would have thought it? More known for her skills as a businesswoman than for her sporting prowess, Kim Kardashian will nevertheless have a part to play in the Tokyo Olympics, opening July 23. But don’t expect to see her throwing a javelin or jumping hurdles, as it’s through her underwear brand Skims that the international icon will participate in the sporting event. In fact, the brand will supply Team USA with undergarments, nightwear and loungewear.

While Kim Kardashian may have always seemed more comfortable in a bikini or a couture dress than in sportswear, she has nevertheless had a strong bond with the Olympic Games since her childhood. This, she owes to her stepparent Caitlyn Jenner, a decathlon competitor who even won a gold medal at the 1976 Summer Olympics. The businesswoman is now taking up the baton and supporting — in her own way — summer’s most eagerly awaited sports event, the Tokyo Olympic Games, through her shapewear brand, Skims.

“Ever since I was 10 years old, I’ve heard every single detail about the Olympics from my stepdad. As I would watch the athletes compete, I would grow to understand the dedication and honor being a part of the Olympics embodied. I traveled w[ith] my stepdad and family to all different cities for the Olympic trials, the Olympics and track meets of @caitlynjenner’s and at every stop I would buy an Olympic t-shirt as a souvenir,” Kim Kardashian wrote on Instagram.

The Skims brand, founded by Kim K., has designed underwear, pajamas and loungewear for Team USA to wear throughout the competition. This may seem surprising — brands usually provide teams’ official outfits for ceremonies — but it’s not that uncommon. Some teams do have their own underwear supplier(s). But seeing as they’re not necessarily called Kim Kardashian, they don’t get quite so much media attention, that’s all.

Fashion Style Wellness Fitness Kim Kardashian Olympics tokyo olympics Skims
You might also like ...
Food & Drink
How to eat vegan like a Kardashian, from zoodles to acai bowls
Living
How to organise your fridge at home like Kim Kardashian
Style
7 biker shorts for your next home workout, coffee run, or Netflix binge sesh
Style
What to wear for a stylish home workout (and workout selfie)
Lifestyle Asia
Here's where you can read the latest news and stories from Lifestyle Asia and our sister titles PrestigeOnline and Augustman, curated from all of our editions in Hong Kong, Singapore, Kuala Lumpur, Bangkok and India.
Luxury