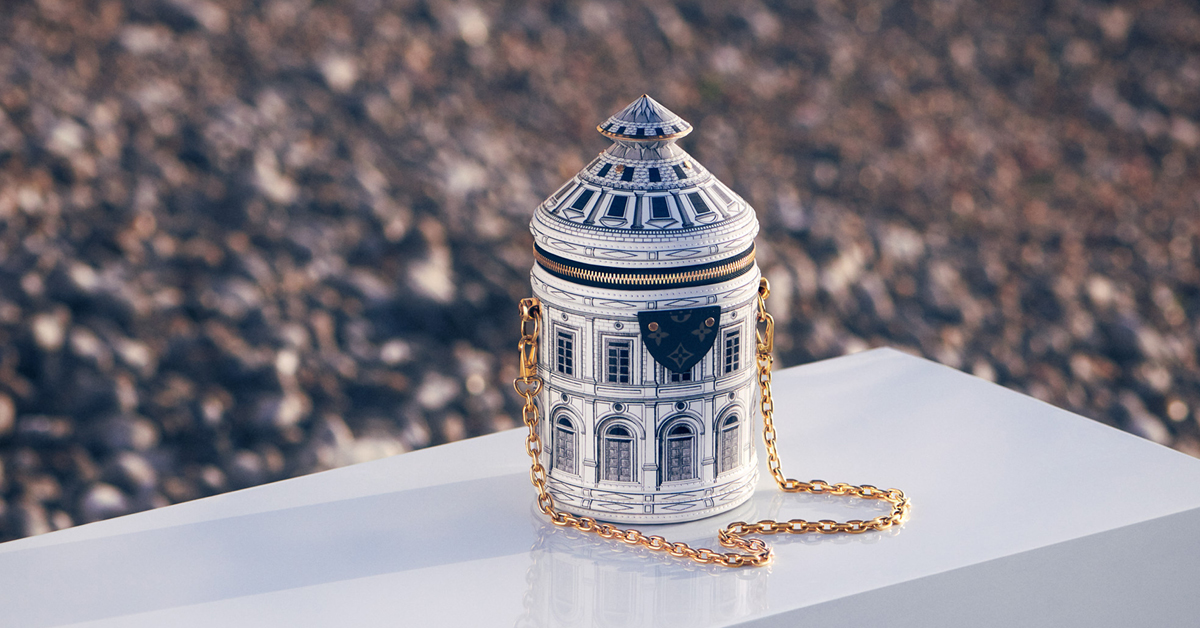 It isn’t often that Louis Vuitton collaborates with another brand to reinterpret their beloved bags, unless it’s for someone as big as Supreme, Yayoi Kusama, or in this case, Fornasetti.

The fact that the French luxury brand has collaborated with Fornasetti for Fall/Winter 2021 is worth considering. To most, Fornasetti is the Italian brand that makes those covetable china plates adorned with a woman’s moon-like face. But Piero Fornasetti, the brand’s founder, had a lot more to offer during his artistic career: he painted wondrous patterns on silk scarves, created surreal theatre sets for Albert Camus’ Caligula, and collaborated with the Italian architect Gio Ponti on some of the most intriguing furniture pieces of the twentieth century.

“As a designer who has always loved fashion’s ability to evoke the past, present and future simultaneously, I wanted to add new layers to this creative palimpsest,” said Ghesquière. “Exploring the Fornasetti archives had the excitement of an archaeological dig, searching for and finding drawings from the past to give them a new life for Louis Vuitton – for now and the future.”

The resulting Louis Vuitton x Fornasetti collection includes everything from clothing to accessories, but it’s the bags that truly possess the timeless quality of a Fornasetti and Ponti cabinet, as well as the charm of those aforementioned plates. Below, we highlight the best designs to add to your collection.

On this bag, dubbed the “Cannes Vase Architettura”, Fornasetti’s love of architecture and the trompe l’oeil effect is on full display. The latter refers to the optical illusion that transforms something flat (in this case, the bag’s patent calf leather surface) into something 3D. Fornasetti’s detailed drawing ingeniously makes Louis Vuitton’s cylindrical bag — which is already pretty unique, as far as designer bags go — resemble the Renaissance-era Baptistery in Florence. Remove its gold chain and you’ll have an artwork worthy of your display shelf.

The Capucines, first launched in 2013, has quickly become one of the most recognisable (and investment-worthy) bags by Louis Vuitton. For this collaboration, it has been elevated with the use of gold metallic leather, as well as Piero Fornasetti’s drawings of the classical Roman sculptures that fascinated him. This is a bag that will turn heads, surely, but with its superior materials and craftsmanship, it may well sit at a museum, too.

The Alma, made in 1934, was only the second handbag to be made by Louis Vuitton. Its silhouette has surely endured the test of time, as have two other design signatures spotted on this new version, the Alma BB Architettura:  Fornasetti’s architectural engraving and the ubiquitous LV monogram.

Louis Vuitton’s legacy of trunk-making shines through the new Petite Malle, which has been reworked with gold metallic leather and Fornasetti’s statues. With its monogram canvas trim and boxy silhouette, achieved by traditional techniques, the shoulder bag is an exquisite example of past-meets-present.

The iconic Keepall duffel bag has been remixed by an array of artists including Takashi Murakami and Jeff Koons, but this version offers perhaps the most refined take on the Louis Vuitton monogram yet. It’s been given bright pops of colour thanks to Fornasetti’s prints of ancient coins, establishing a whole new meaning to the term “status symbol”.

Shop the collection at Louis Vuitton stores on louisvuitton.com.

Fashion Style Louis Vuitton Handbags fornasetti
You might also like ...
Style
Icons before Instagram: How Louis Vuitton pioneered travel fashion 200 years later
Style
A closer look at Louis Vuitton’s Capucines handbag on Disney’s ‘Cruella’
Style
The micro bag you should get, based on your zodiac sign
Style
Why are nylon bags everywhere right now?
Lifestyle Asia
Here's where you can read the latest news and stories from Lifestyle Asia and our sister titles PrestigeOnline and Augustman, curated from all of our editions in Hong Kong, Singapore, Kuala Lumpur, Bangkok and India.
Luxury