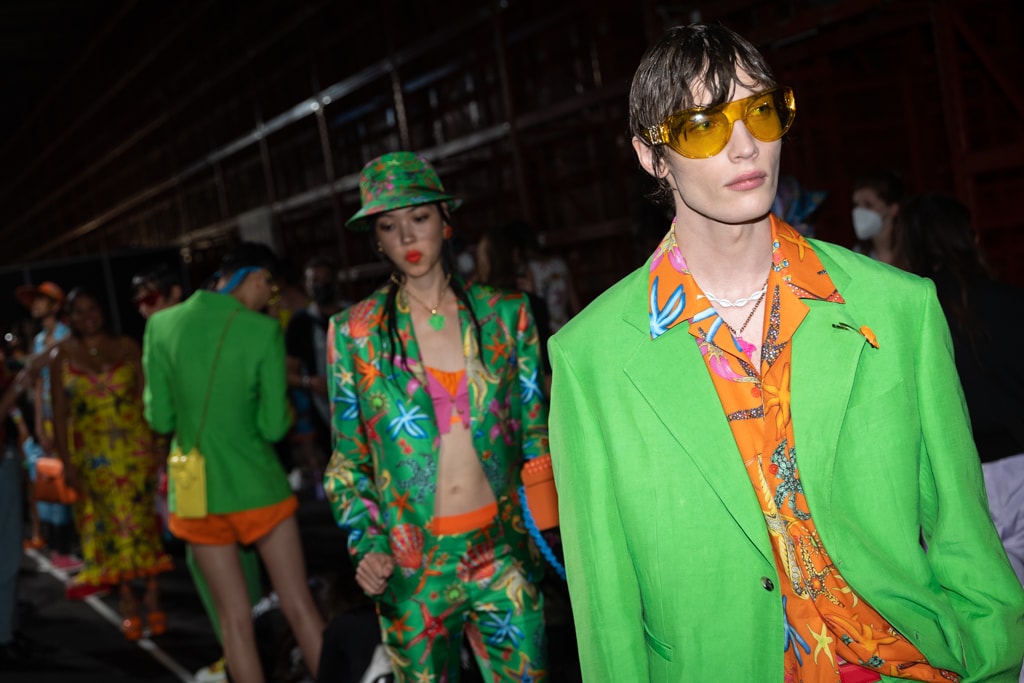 Partly inspired by the pandemic, this Milan Fashion Week saw many a face mask and many a love letter to sweeter times. Here’s the low-down.

The week ended Sunday with Valentino, which had moved its catwalk from Paris this season as a show of support for an Italy devastated by the virus earlier this year. Love letters such as these are actually a running theme, and we absolutely get it. Below, read on for our round-up of the top 3 trends from Milan Fashion Week Spring/Summer 2021.

Whether or not people will be permitted to travel to Italy next summer, they can be transported there through their wardrobes. Dolce&Gabbana paid homage to the designers’ beloved Sicily, with a patchwork collection evoking the island’s warmth and colours, while Etro was inspired by the picturesque Amalfi coast.

“I started the collection during the lockdown,” designer Veronica Etro said before her show. “Like everyone else, I was at home doing housework. And my mother and I restored an old record player and started listening to old Neapolitan songs, and we were bewitched by the serenity, timelessness and elegance.

“Then I started thinking about a trip I made in 2019 to Ischia, Capri, Naples and Positano, and — maybe because we were feeling so patriotic then — I thought, okay, let’s do the collection on Italy,” she said. Silky caftans in sorbet colours, patterned bikini tops and straw hats suggested walks on the beach before enjoying chic aperitifs.

Pucci instead headed for the island of Capri, distilling the fashion house’s signature prints and ’60s silhouettes — including its famous Canzone del Mare pattern — in pastel sheer silks and organzas.

Max Mara’s creative director Ian Griffiths thought not of seaside pleasures but summer in Italy’s art cities and the Renaissance, with hexagonal motifs mimicking the mosaic floors of the country’s cathedrals.

The nationwide lockdown also appears to have prompted Italy’s luxury brands to dust off their archives and reinterpret key pieces from the past. Versace led the way, with Donatella Versace building on Gianni Versace’s “tresor de la mer” collection for Spring 1992, with its starfish, coral and seashell motifs.

At Fendi, the collection was inspired by the finely embroidered household linen owned by designer Silvia Venturini Fendi’s family.

Over at Marni, coats made from up-cycled pieces from previous collections were then hand-painted with words that designer Francesco Risso collected from exchanges he had with friends and his team during the lockdown.

Dolce&Gabbana used remnants of fabric from previous seasons to lower the environmental impact of their show.

It was an oft-heard debate of lockdown: does not leaving the house mean you can stay in your pyjamas all day? Italy’s designers gave an out to those reluctant to suit up: Armani proposed silk sweatpants, while Fendi paired outfits with slippers.

Etro encouraged lounging in caftans and nightgowns, while Max Mara indulged slouchers with hooded sweatshirts. And Valentino provided the cherry on the home-comfort cake with a surprise collaboration with Levi’s that produced a coed model of the 517 boot cut jean.