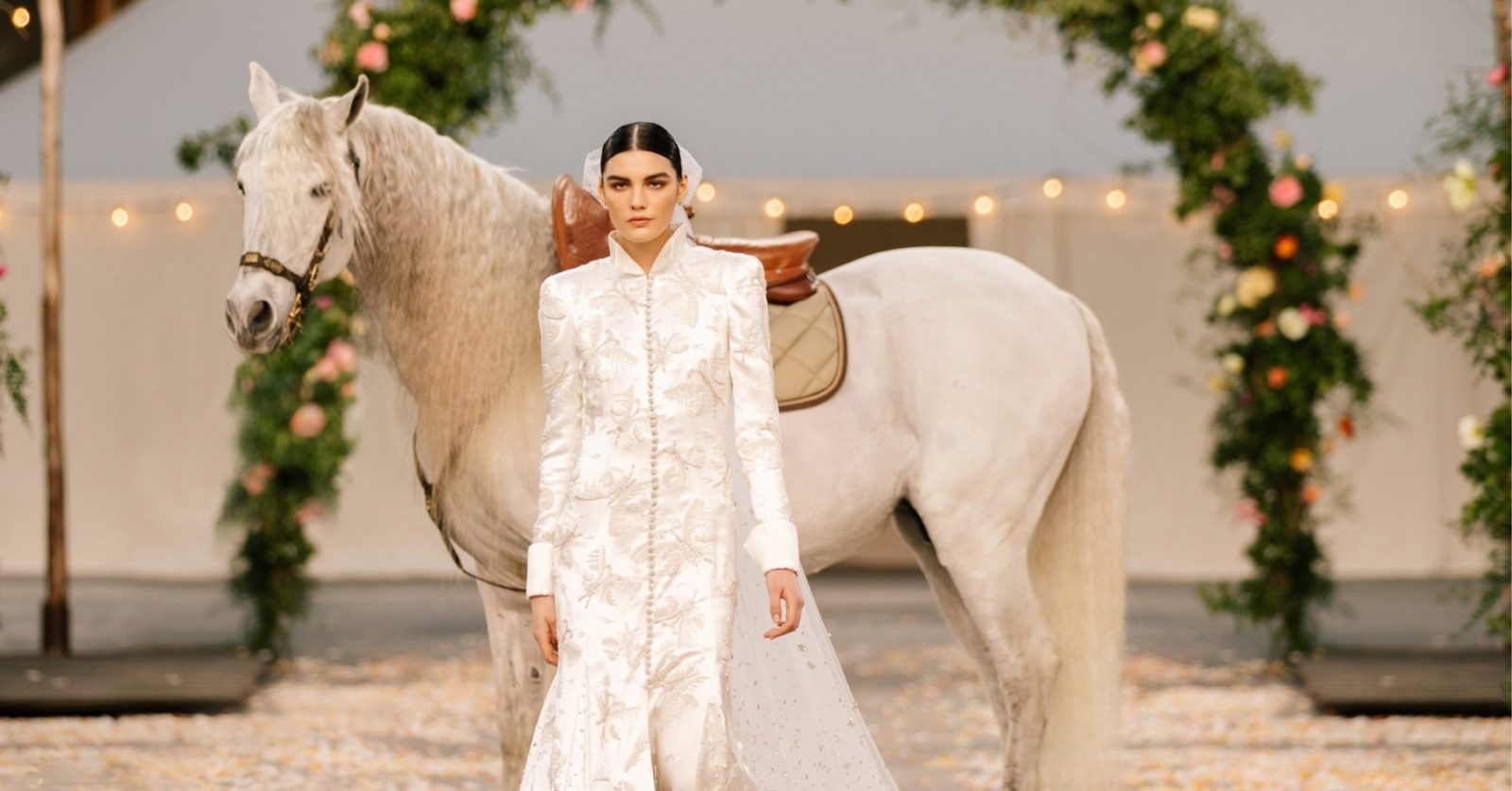 The most obvious was the addition of Fendi, now helmed by Dior menswear designer Kim Jones, to the fashion calendar. All eyes were on his womenswear and couture debut, and the British designer certainly made a spectacle of it. Then there was the return of another fashion favourite, Alber Elbaz, who launched his new size-inclusive label, AZ Factory, to the congratulations of Anna Wintour, Marc Jacobs, Maria Grazia Chiuri and more.

Chiuri herself had her moment with what might be her strongest Dior collection to date — inspired by the mysticism of tarot cards, no less. If that sounds too far out, there was Pierpaolo Piccioli’s Valentino collection, which took our everyday clothes and transformed them into handcrafted objects of beauty and compelling craftsmanship.

Below, discover all the joyous moments of Paris Couture Week.

You may not be the only one obsessed with tarot readings in the shadow of uncertainty that the pandemic has cast. Dior artistic director Maria Grazia Chiuri found the starting point of her latest collection in the oldest surviving set of tarot cards: the 15th-century Visconti-Sforza deck.

The High Priestess, the Fool, Justice, Death and other archetypes of the major arcana were featured in Dior’s new haute couture film, which follows a woman along a journey of self-discovery. Every character was a picture of Renaissance extravagance, whether garbed in regal brocade robes, lustrous gowns with hand-painted florals and zodiac prints, or embroidered empire waist dresses with square necklines that are fit for Bridgerton.

Pandemic or no, we all love a wedding. Virginie Viard decided to stage a bohemian-inspired one at the Grand Palais for her Chanel haute couture presentation. It was attended by the Chanel family: Penelope Cruz, Marion Cotillard, Lily-Rose Depp and her mother, Vanessa Paradis. “I love big family reunions, when the generations all come together,” said the designer. “It’s so warm.”

Indeed, you could see the different generations of wedding guests represented in her collection. The younger girls could wear the prom-style tulle frocks or summery spaghetti strap dresses; the matrons had several choices of skirt suits in tweed and lace; and for the bride, who arrived on horseback, a satin crepe gown with a winged collar and a tulle train, straight out of the 1920s.

Valentino debuted everyday couture for everyone

“Originally, couture was meant to offer a wardrobe to women, who could afford couture,” said Valentino designer Pierpaolo Piccioli. “Now, the idea is to conceive a wardrobe made for modern people, created with the same ritual.” Hence his latest collection, which imagines a new normal where our everyday garments are elevated with complex craftsmanship.

How about a sack back hoodie in an ornate, textured gold fabric? Or a skirt made out of cloth squares, hand-knotted together? There was also what appears to be a rib knit dress, but is actually made of metres of hand-rolled fabric. Just as breathtaking as the sequinned evening gowns — paired with towering platform boots, no less — were the coats. Here the Valentino team showed their couture prowess, crafting them with fabric folded into roses, or cut and looped together in 3D, origami-style patterns. These were worn by both women and men, who made their appearance at a Valentino haute couture show for the first time.

Alber Elbaz made a comeback

Amidst all the haute couture hubbub, Alber Elbaz made his long-awaited return to the runway. What has the designer been up to since departing from the helm of Lanvin in 2015? Working on his new label, AZ Factory, which he launched this week.

Aiming to provide “beautiful, practical, and solutions-driven fashion that works for everyone”, Elbaz’s first collection offers staples like knitted tops, bodysuits, bodycon dresses, sneakers and accessories. The knitwear is where the “solutions-driven” bit really comes into play: They’re crafted with AnatoKnit technology that follows the shape of your curves, allowing for ample movement, breathability and support, regardless of your size. The best part? You can already get your hands on AZ Factory pieces on Net-a-Porter.

Kim Jones has proven his flair for menswear at Dior and, before that, Louis Vuitton. This week, as Fendi’s newly appointed artistic director, he made his debut as a womenswear designer with the highest form of the craft: haute couture.

He pulled out all the stops for his first Fendi show, which was staged within a mirrored maze shaped like of the Italian brand’s FF motif. He had his famous friends walk the runway, including Naomi Campbell, Christy Turlington, Demi Moore, Bella Hadid, Cara Delevingne, Kate Moss and her daughter, Lila. As for the clothes themselves, the British designer looked to the time- and gender-bending world of Orlando, the Virgina Woolf novel that inspired last year’s Met Gala. There were sequinned gowns with a jacket sleeve on one shoulder, sweeping satin caped suits for him and her, and other richly embellished evening wear proposals, some of which Jones developed from the sketches of his predecessor, Karl Lagerfeld.